A fighter loyal to the Tigray People’s Liberation Front near Hawzen in the Tigray region of northern Ethiopia Associated Press/Photo by Ben Curtis, file

In mid-October, 28-year-old Mawcha Asmelash attended a public meeting in Ethiopia’s Amhara region, bordering the conflict-hit area of Tigray. Amhara militia members warned those present that Tigrayans like Asmelash should turn in anyone supporting the Tigray forces, or they would be killed.

Five days later, the militia attacked. “I saw four people being killed on the run,” said Asmelash, who later fled to neighboring Sudan after hiding in the bush for two days.

Reports of targeted attacks on ethnic Tigrayans and forced conscriptions have emerged as regional Tigrayan forces advance on the Ethiopian capital of Addis Ababa. Fearing the conflict will spread, regional and international groups are racing to negotiate a cease-fire.

Federal troops launched an offensive against the regional government of the semi-autonomous ethnic Tigray region last November after months of political tensions. Since then, the fighting has killed thousands of people, displaced more than 2 million, and drawn in other regional militias. Rights groups have accused both sides of crimes against civilians. On Friday, the Biden administration imposed sanctions on the military of neighboring Eritrea for its role in exacerbating the conflict.

After the Tigrayan troops announced late last month that they were less than 240 miles from Addis Ababa, Prime Minister Abiy Ahmed imposed a state of emergency. His government called on retired armed forces and other civilians to prepare to take up arms to defend the country.

In the city of Humera, residents said Amhara and Eritrean troops supporting federal forces seized young men and boys from their homes at night, likely to force them to join the fight.

Since the emergency declaration, the Ethiopian Human Rights Commission said authorities arrested several Tigrayans, including women and children. The United Nations confirmed federal forces detained at least 16 of its local staff members and arrested about 70 truck drivers contracted by aid groups. Dual British and American citizens have also been caught up in the arrests. Police spokesperson Fasika Fante insisted the arrests were not based on ethnicity and only target those who directly or indirectly support the Tigray forces, including “moral, financial and propaganda support.”

The armed conflict has exacerbated the political divide in the country. On Nov. 7, thousands of people attended a rally in Meskel Square in Addis Ababa, chanting support for Abiy and holding signs reading, “Shame on you USA.”

But Abiy is also facing backlash. On Nov. 5, representatives from the Tigrayan forces joined eight other armed and regional opposition groups to form a new coalition against Abiy. Leaders said the United Front of Ethiopian Federalist Forces would pose a political and military challenge to his leadership.

Olusegun Obasanjo, the African Union’s envoy for the Horn of Africa, last Monday warned that the window of opportunity is closing to mitigate the crisis. Obasanjo, a former Nigerian president, has been holding talks with U.S. envoy Jeffrey Feltman to form a cease-fire agreement.

As the parties try to reach a peaceful resolution, civilians continue to suffer the brunt of the crisis. Amnesty International chronicled accounts of witnesses who said Tigray forces raped dozens of women in Amhara and looted medical facilities. Ethiopian and Eritrean troops have also killed civilians and looted food and farming equipment, according to residents who fled the area.

The United Nations said no trucks carrying food or other aid supplies have entered Tigray since Oct. 18. Trisha Okenge, the Ethiopian country director with aid group Food for the Hungry, said her team members haven’t reached some communities in Amhara for up to four months. Team members in the region also face family separations and spiking food costs, she added.

The United States and Canada have asked nonessential government employees and their families to leave the country. Okenge said she will take her daughter back to Canada but return to Ethiopia to continue the team’s efforts. “Things appear to be getting significantly worse, and we need to dig in even harder now to respond to the needs that we’re seeing,” she said. 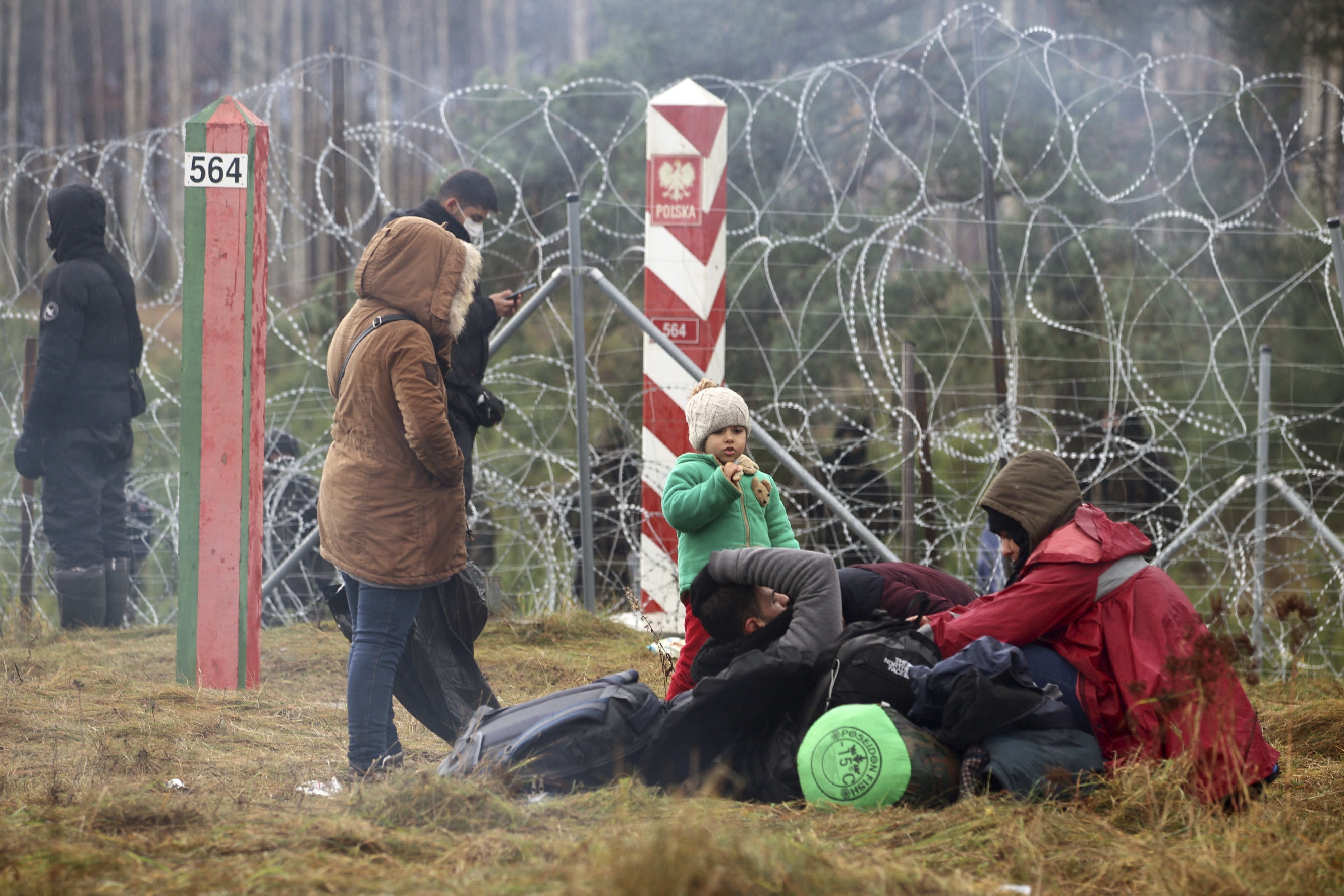 Migrants from Iraq and other Middle Eastern and Asian countries tried to cut through the razor wire border fence. Several men chanted “Germany,” suggesting Poland was not their intended destination.

Polish Maj. Katarzyna Zdanowicz said 3,000 to 4,000 migrants are backed up along the border. Temperatures in the migrants’ makeshift camps drop below zero at night, and at least nine people have died. Polish authorities recorded more than 30,000 attempted border crossings this year, including 17,000 in October.

Migrants said Belarusian authorities escorted them to the border. Polish officials accused Lukashenko and Russia of “weaponizing migrants” and said Lukashenko granted them access in order to pressure the European Union to drop sanctions. The EU and other Western nations imposed sanctions on Lukashenko’s regime after he shut down pro-democracy protests last year.

On Belarusian state television, Lukashenko denied the accusations and threatened retaliation. Both sides have accused each other’s guards of firing into the air near the border. “I am afraid that this confrontation at the border because of migrants might lead to an active phase,” he said. “These are grounds for provocations.”

European leaders are considering constructing a border wall or a barricade along the region’s eastern frontier. On Monday, the European Union agreed to sanction airlines accused of transporting migrants into Belarus. European Commission President Ursula von der Leyen said after meeting with President Joe Biden that the United States plans to impose new sanctions on Lukashenko by early December. —O.O. 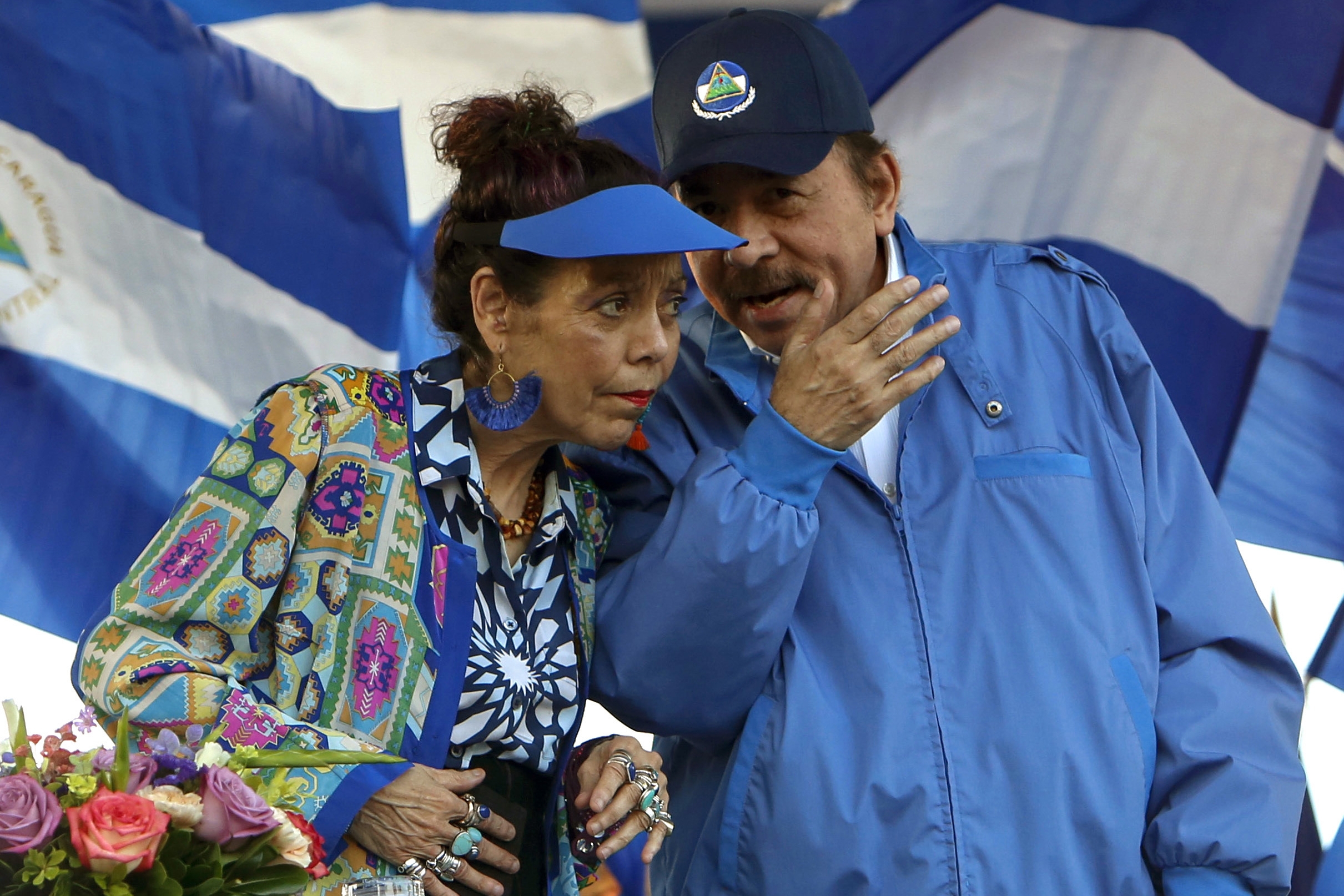 Ortega scored more than 70 percent of the votes in an expected victory after his administration detained leading opposition candidates. Ortega served as president from 1985 to 1990, then returned to power in 2007. He recently declared his wife, Vice President Rosario Murillo, to be “co-president.”

One day before the Nov. 7 vote, the Blue and White National Union said authorities detained eight of its leaders in “illegal raids.” Another coalition, the Civic Alliance, reported “harassment, surveillance, intimidation, assault, attacks, illegal and arbitrary detentions.” The opposition called on people to stay home in protest.

President Joe Biden criticized the election as a “pantomime” and said the United States would hold the Nicaraguan government accountable. “The Ortega and Murillo family now rule Nicaragua as autocrats, no different from the Somoza family that Ortega and the Sandinistas fought four decades ago,” he said. —O.O.