Nowhere to stay and nowhere to go

Migrants, many from Haiti, at an improvised camp in Ciudad Acuña, Mexico, on Wednesday Associated Press/Photo by Fernando Llano

Claire Bazile arrived in Haiti’s capital city of Port-au-Prince on one of the first deportation flights from the United States this week. Haitian officials temporarily kept the 35-year-old and her 2-year-old son in a hotel along with other returnees. But Bazile had no idea where she would stay or work after leaving the hotel. She left the country like many other Haitians after the deadly 2010 earthquake. Another earthquake last month destroyed the home where her mother and six siblings lived. “They’re out on the street,” she said.

Bazile is one of some 14,000 Haitians who crowded under the International Bridge in the southern border city of Del Rio, Texas, in a sudden rush to get into the United States. Many of them migrated from Haiti to Central and South America years ago. In response, the Department of Homeland Security deployed 600 personnel to Del Rio to facilitate one of the largest-scale expulsions from the United States.

On Friday, local officials said no one remained at the encampment. DHS said Thursday that it had expelled nearly 2,000 Haitians on flights since Sunday. About 3,900 were being processed for a possible return to Haiti or placement in U.S. immigration court proceedings. Others had been released in the U.S. with notices to appear in court or to report to immigration authorities. Thousands returned to Mexico.

People deported to Haiti from the United States are finding themselves in a country that is less stable than when they left. In July, suspected armed foreigners assassinated Haitian President Jovenel Moïse. A 7.2-magnitude earthquake struck southern Haiti last month, killing more than 2,200 people. Gangs control about a third of the capital city of Port-au-Prince. In June, the United Nations said the violence had displaced nearly 14,000 people over nine months.

Many of the migrants who amassed at the border said they received detailed instructions via the WhatsApp messaging app and Facebook on how to get to the border city from others who made the journey. Homeland Security Secretary Alejandro Mayorkas linked the sudden influx to false information about the administration’s temporary protected status for Haitians. The designation allows immigrants from war-torn or dangerous countries to stay in the United States until conditions in their homeland improve. After Moïse’s assassination in July, the Biden administration extended an existing TPS designation for Haiti until Feb. 3, 2023. The administration’s order gave a slew of reasons why it was not safe for Haitians to return, including gang violence, human rights abuses, extreme poverty, and poor public health—all exacerbated by the COVID-19 pandemic.

DHS was clear in its announcement that the order only applied to Haitians who arrived in the United States before July 29, but many of the migrants who arrived at the southern border somehow did not get the message. Some said they received no warning that authorities were sending them back to their home country.

Aminadel Glezil, 31, told The New York Times he didn’t realize he was getting deported until he was on an airport shuttle heading for the plane. Like many other migrants, Glezil said he sold his house in Paine, Chile, along with his car and furnishings to get to the U.S. border. “I couldn’t believe a powerful country like the U.S. would treat us that way,” he said.

The Biden administration has closed the borders to most immigrants under the Title 42 public health law that allows federal health officials to immediately remove migrants from the country during the COVID-19 pandemic. But two U.S. officials this week said authorities are also releasing some migrants with orders to appear at an immigration office in 60 days. It’s unclear how officials decided whom to detain, deport, or release.

Overwhelmed Haitian officials initially asked the United States to grant a “humanitarian moratorium” on deportations and warned the country couldn’t handle the returnees. But Prime Minister Ariel Henry, appointed weeks after Moïse’s death, pledged to help the deportees and vowed to work to improve the country’s economy. Haitian authorities welcomed returnees this week with a meal, toiletries, and a promise of $100 in Haitian currency.

As the expulsion operation intensified, migrant Nelson Saintil moved with his wife and four children back across the border to Ciudad Acuña, Mexico, to avoid deportation to Haiti. Mexico started to transport migrants away from its side of the border to other cities like Tapachula, which houses the largest immigrant detention center in Latin America. Some 19,000 Haitian migrants have requested asylum in Mexico this year.

Saintil likened the risk of deportation on both sides of the border to an open-air jail.

“I do not want to be like mice who do not find out that they are falling into a trap," he said. “Because returning to Haiti is to bury a person alive.” 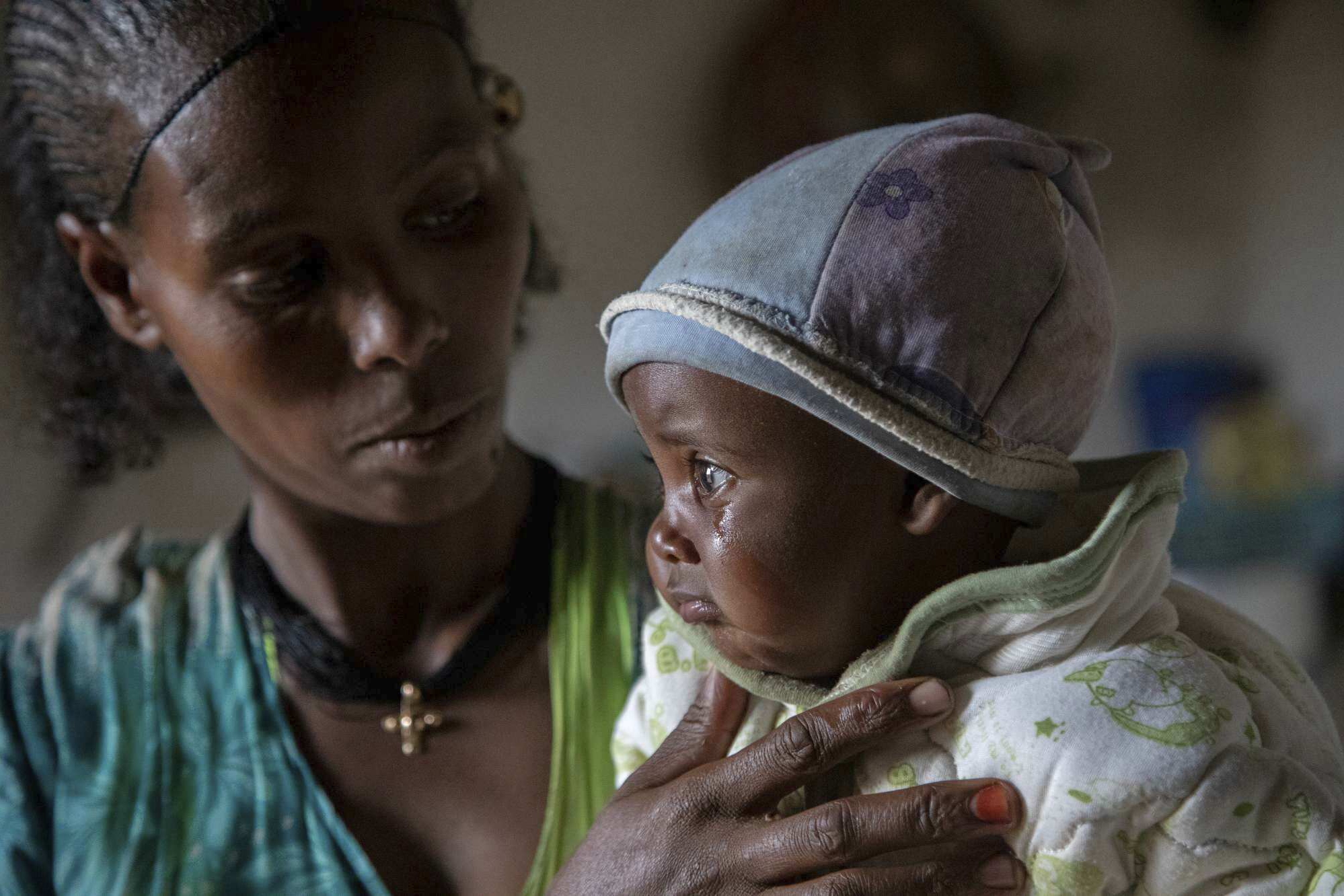 A mother and her malnourished child in Tigray, Ethiopia Associated Press/Photo by Christine Nesbitt/UNICEF (file)

Evidence mounts of starvation in Ethiopia

The Tigray External Affairs Office said at least 150 people starved to death in August, including in camps for displaced people. A mother and her 1.7-pound newborn died of hunger at a health center last week. One aid worker said such reports are coming in from every district in the region.

The war in Tigray began in November as a political dispute between Prime Minister Abiy Ahmed and the Tigrayans who had long dominated Ethiopia’s government. Tigrayan fighters retook control of the area in June. Ethiopia declared a cease-fire but sealed off the region, preventing any aid from getting in or communication from going out.

The United Nations warned for months that Tigray was suffering from the world’s worst hunger crisis in a decade primarily due to the government blockade. Humanitarian workers received a list of items they can’t take into the region, including multivitamins or personal medications.

The United Nations said the urgent need for food would continue well into next year since fighting stymied planting and the region will likely only yield at most half of the usual harvest. Linda Thomas-Greenfield, the U.S. Ambassador to the United Nations, warned the United States would impose even more sanctions if the government fails to grant unhindered humanitarian assistance. —O.O. 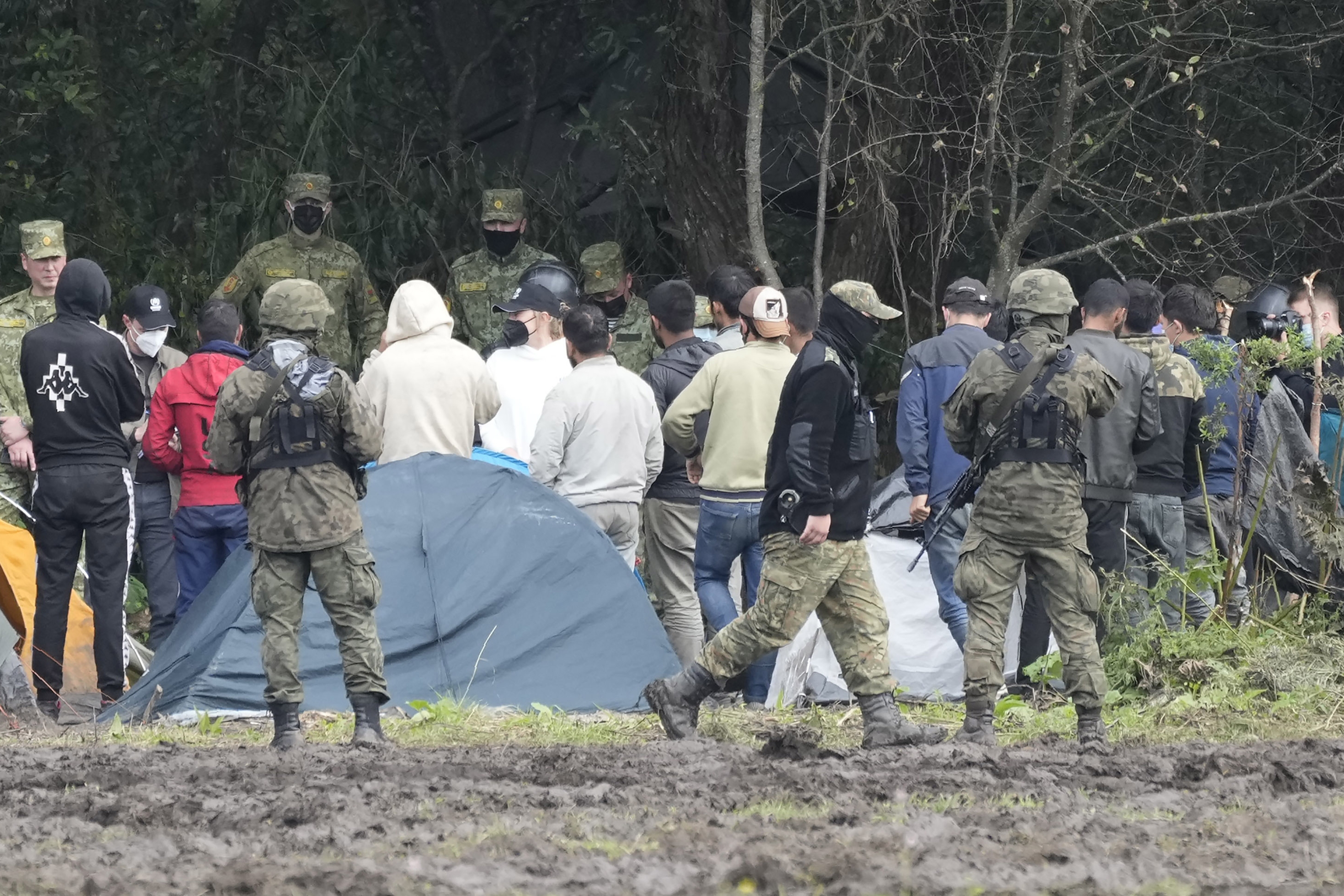 A surge of people is crossing into Poland and Lithuania along their shared border with Belarus. Polish Prime Minister Mateusz Morawiecki said authorities spotted about 7,000 migrants and asylum-seekers along the border since early August. The arrivals began after the European Union and other Western nations imposed sanctions on Belarusian President Alexander Lukashenko’s regime. The European Union nations accused Lukashenko of a “hybrid attack” against the bloc.

On Sunday, authorities reported finding four people dead along the border. “We are dealing with a well-organized action directed from Minsk and Moscow,” Morawiecki said. “We will defend Poland's border with full determination.” —O.O.

Paul Rusesabagina, a businessman whose role in saving more than 1,000 lives during the 1994 Rwandan genocide inspired a movie, received a 25-year prison sentence this week on terrorism charges.

The court in Rwanda’s capital city of Kigali on Monday found the 67-year-old guilty of leading and aiding a rebel group blamed for attacks in 2018 and 2019. Rwandan authorities detained Rusesabagina in August 2020. Prosecutors pursued a life sentence, but Judge Beatrice Mukamurenzi denied the request because this was Rusesabagina’s first conviction.

Rusesabagina rose to international fame after he was credited with saving 1,200 people during the 1994 Rwandan genocide by hiding them in the hotel he managed. Since then, he has openly criticized Rwandan leader Paul Kagame. Rusesabagina is a Belgian citizen and holds a U.S. green card. President George W. Bush awarded him the Presidential Medal of Freedom in 2005. U.S. and European officials have voiced concern over his arrest and trial. —O.O.

Many of the Del Rio denizens under that bridge had lived sufficiently long enough in both Brasil and Chile to be fluent in Portuguese and Spanish respectively. Chile remains the economically freest nation down there. The trek from the southern tip of South America all the way up to Ciudad Acuna cost a lot and gives testimony to the organizational and logistical prowess of the cartels: think of all those nations and their border guards who had to be bribed.

I protested against the white minority govt in South Africa in the 80s and perhaps now is the time to protest against the black majority govt of Haiti. This nation remains the Rodney Dangerfield of the Caribbean: just can't get any respect. We should encourage the OAS to designate a board or commission to run that nation until such time as they can self govern with minimal graft and corruption. Let disease free Haitians with needed job skills come to the USA and then encourage remittances to the left behind families.