The country is already struggling with high COVID-19 infections

A fallen tree in Mumbai, India, on Tuesday Associated Press/Photo by Rafiq Maqbool

Hundreds of workers were on barges and offshore oil drills off the coast of Mumbai when a storm swept onto western India from the Arabian Sea this week. The Indian Navy coordinated a dayslong rescue effort on rough seas to assist the stranded. One of the rescued workers said the waves topped 40 feet while they worked against the strong winds to stay afloat for nearly 12 hours as their barge sank. “It was worse than the Titanic, as dead bodies of our colleagues who worked with us could be seen floating in the water,” said Vishwajeet Bandgar, a 28-year-old welder on one of the barges.

Cyclone Tauktae was the most powerful storm to hit the region in more than two decades, packing gusts of more than 130 miles per hour when it came ashore on Monday evening. The severe weather comes as the country battles to get its record-high number of COVID-19 cases under control.

Tauktae killed at least 90 people and left dozens missing at sea. About 45 of the deaths came from Gujarat state on India’s western coast. The storm damaged more than 16,000 houses, uprooted more than 40,000 trees, and pulled down more than 1,000 electric poles, Gujarat’s Chief Minister Vijay Rupani said. The cyclone flattened mango orchards and other crop farms across the state and brought heavy wind and flooding to Mumbai.

Navy ships, helicopters, and surveillance aircraft have rescued more than 600 people and recovered at least 26 bodies from the sea, the Indian defense ministry said on Wednesday.

The storm weakened into a depression, but forecasters warned of more heavy rainfall. The Ministry of Earth Sciences on Wednesday predicted another cyclone was likely forming over the Bay of Bengal and could hit the eastern coast.

Tauktae is the worst to hit the region since a 1998 cyclone killed at least 4,000 people. More than 110 people died last May after super cyclone Amphan struck eastern India and Bangladesh.

Authorities in Gujarat had evacuated more than 200,000 people from low-lying coastal areas ahead of the storm, including COVID-19 patients along the coast.

India started to record a surge in coronavirus cases in April, triggering desperate searches for oxygen and other medical supplies. India’s seven-day rolling average for new infections is dropping but still over 300,000, according to Johns Hopkins. The Indian Health Ministry on Wednesday reported 4,529 deaths in 24 hours—a new global record of deaths in a single day.

In Mumbai, authorities moved 600 COVID-19 patients from field clinics to hospitals as a precaution ahead of the storm. Gujarat also suspended its vaccination drive for about two days. Rupani said authorities in the state provided more than 1,000 coronavirus hospitals in coastal towns with generators. “Besides the daily requirement of 1,000 tonnes of oxygen in Gujarat per day, an additional stock of 1,700 tonnes has been secured and could be used in case of emergency,” he said.

Udaya Regmi, the South Asia head of the International Federation of Red Cross and Red Crescent Societies, said it presents a “terrible double blow” for families already battling the coronavirus. Regmi said the organization helped authorities to evacuate people and provide first aid and masks: “Every effort must continue to keep people safe from this dangerous storm and the raging pandemic.” 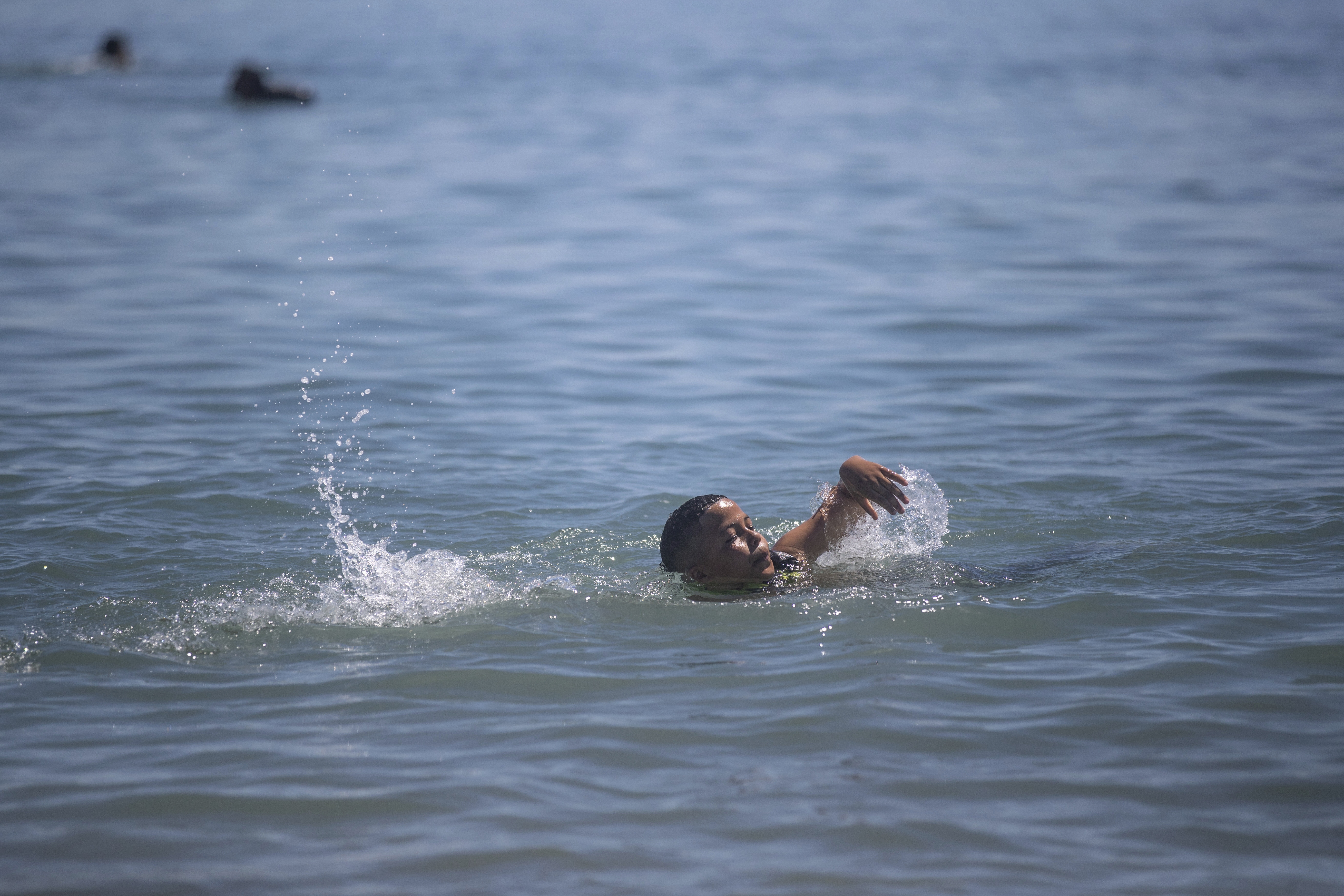 A boy swims from the Moroccan border town of Fnideq toward the Spanish enclave of Ceuta on Wednesday. Associated Press/Photo by Mosa'ab Elshamy

Some 8,000 migrants boarded inflatable boats or swam from Morocco to the shores of the Spanish city of Ceuta by Tuesday. The arrivals began early on Monday but eased as Spain deployed more police and military to man the border. About 1,500 of the arrivals were teenagers, the Spanish government said.

Ceuta is an autonomous Spanish city on the northwestern tip of Africa across the strait of Gibraltar. Spain said it sent back more than half of the arrivals by Wednesday. The influx comes amid diplomatic tensions after Spain gave the leader of the Western Sahara independence movement COVID-19 treatment in Madrid. “This is an act of defiance,” Spanish Prime Minister Pedro Sánchez said. “The lack of border control by Morocco is not a show of disrespect of Spain, but rather for the European Union.”

Increasing numbers of migrants have arrived in several European countries across the Mediterranean in recent weeks. Some 80 Africans crossed into Melilla, 218 miles east of Ceuta, by jumping over the double fence on Tuesday. Some 1,400 migrants who left Libya and Italy arrived on the Italian island of Lampedusa over two days last week. Tunisia’s defense ministry on Tuesday said more than 50 migrants who departed from Libya died after their boat sank. —O.O. 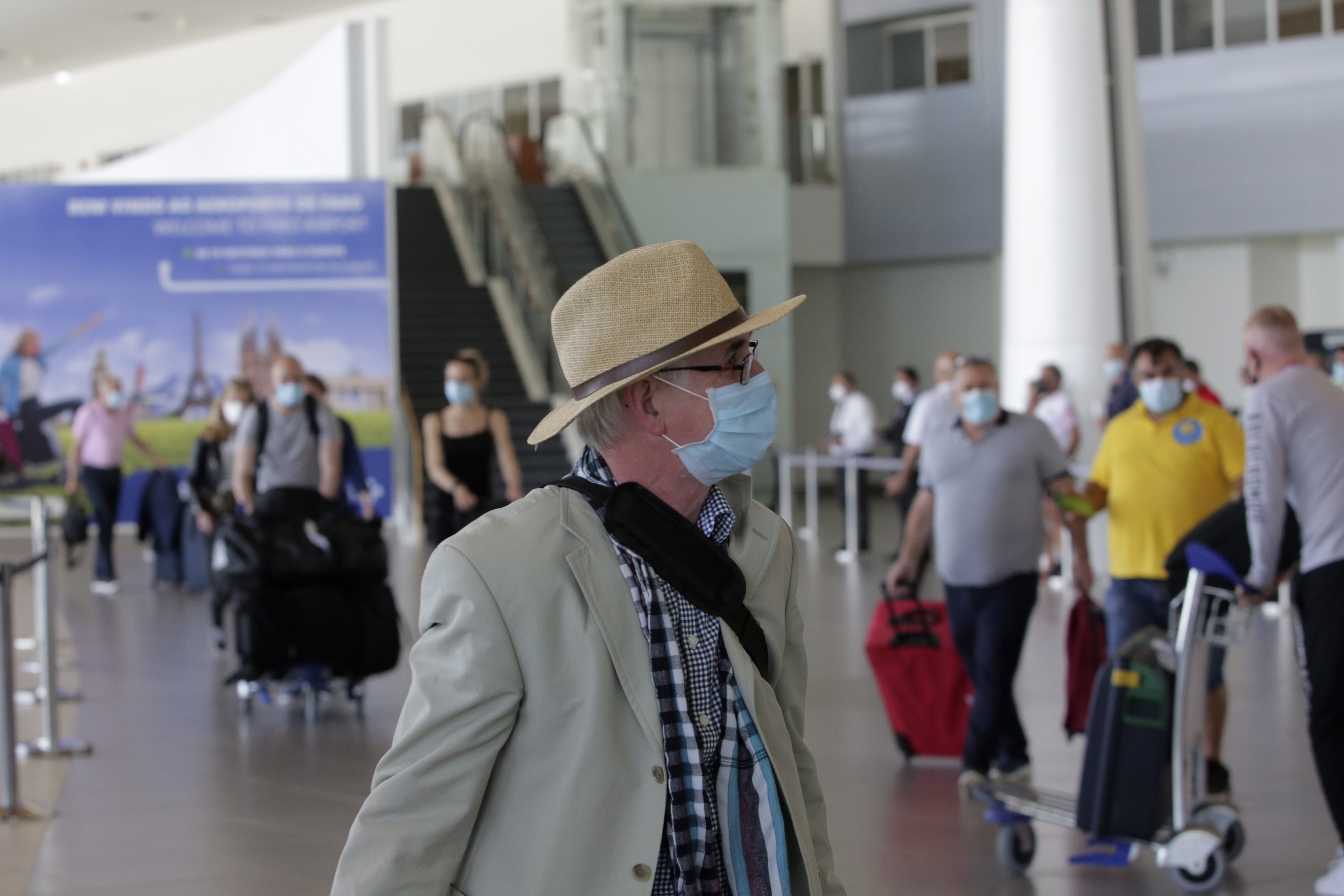 Passengers on a U.K. flight arrive at the airport in Faro, Portugal, on Monday Associated Press/Photo by Ana Brigida

More than 5,000 British vacationers arrived in Portugal on Monday as both countries eased some COVID-19 measures.

British Prime Minister Boris Johnson on Monday announced changes extending to England, Wales, and most of Scotland. The move lifts the ban on foreign travel and allows people to gather at pubs, restaurants, and movie theaters. England entered its third national lockdown in January and will ease the remaining limitations by June 21.

Johnson encouraged people to “take this next step with a heavy dose of caution,” especially as the Indian variant of the coronavirus continues to spread in the United Kingdom. Health Secretary Matt Hancock said the variant is “quite likely” to become the domain strain in the country. About 70 percent of U.K. adults have received at least the first shot of a COVID-19 vaccine. —O.O.

Authorities in a southwestern Chinese province this month asked public servants and members of the Communist Party to curb extravagant celebrations as part of an ongoing corruption crackdown.

The directive in Funing county asks officials not to use official vehicles for personal business and report their guest list and wedding costs to authorities before events. It added that funerals should not exceed three days: “During the funeral, it is strictly forbidden to hire crying teams, art teams, or lion dance teams to carry out memorial activities.”

Weddings and funerals in China serve as measures of social class and a display of opulence. The central government in 2019 had asked local authorities to provide detailed policies to cut down lavish celebrations. Authorities in Funing said the changes would “carry forward the fine style of hard work and thrift, cultivate and practice socialist core values, and to create a good urban and rural landscape of thriftiness, civility, and honesty.” —O.O.