Pastor Alexis Pérez left his church community in the Cuban capital city of Havana for a work visit to the United States one week before historic protests hit the country. Tens of thousands of demonstrators gathered in Havana and at least 47 other locations on Sunday chanting “freedom” and “down with the dictatorship.”

“I’m 50 years old and I’ve always been living in Cuba, and this is the first time in my life something like this happened in Cuba,” Pérez said. “I think Cuba is not going to be the same anymore.”

Cuba, a communist island with little tolerance for dissent, last saw such widespread demonstrations fueled by economic hardship in 1994. Similar issues, exacerbated by the pandemic, sparked the latest outcry. The demand for change has continued despite the government’s crackdown, while Christians and other Cubans wonder about the long-term effects.

Demonstrators decried electricity cuts, a medicine shortage, and long lines to get food at supermarkets with increasingly bare shelves. Cuba is facing one of its worst economic crises in decades, aggravated by economic sanctions imposed by the Trump administration. The pandemic has further constricted the tourism-dependent economy.

Authorities have arrested at least 140 people since the protests began, said Erika Guevara-Rosas, Amnesty International’s Americas director. Authorities detained some religious leaders who joined the demonstrators, including two pastors from the Berean Baptist Mission and the Rev. Yusniel Pérez Montejo from the Eastern Baptist Convention, according to a Tuesday statement from the United States Commission on International Religious Freedom. In the central Cuban city of Camagüey, authorities beat the Rev. Fr. Castor José Álvarez Devesa with a bat and arrested him. They released him days later.

“I believe that we must continue to pray for all those who are still detained so that there is justice with them, so that there will be no excesses and that we Cubans can find the way to peace and freedom,” Devesa said in a video after his release.

As the protests grew, Cuban President Miguel Díaz-Canel called on the nation’s “revolutionary” citizens to confront the protesters, sparking clashes on the streets. In a Monday address, Díaz-Canel condemned the protests and blamed the situation on “a Cuban-American mafia” social media campaign and U.S. sanctions.

But Díaz-Canel changed his tune on Wednesday night, admitting state failures contributed to the people’s grievances. “We also have to carry out a critical analysis of our problems in order to act and overcome, and avoid their repetition,” he said.

Ahead of the speech, Prime Minister Manuel Marrero and other lawmakers announced plans to stabilize the national electrical system, improve medical supplies, and other economic reforms.

Despite the government’s crackdown on the protests and subsequent concessions, Pérez believes the protests have left a lasting impact on Cubans. “Even though the government prevails, which I think it will, I think this [the protests] would come in the future,” he said. “We’re praying, looking for wisdom for how to deal with all this.” 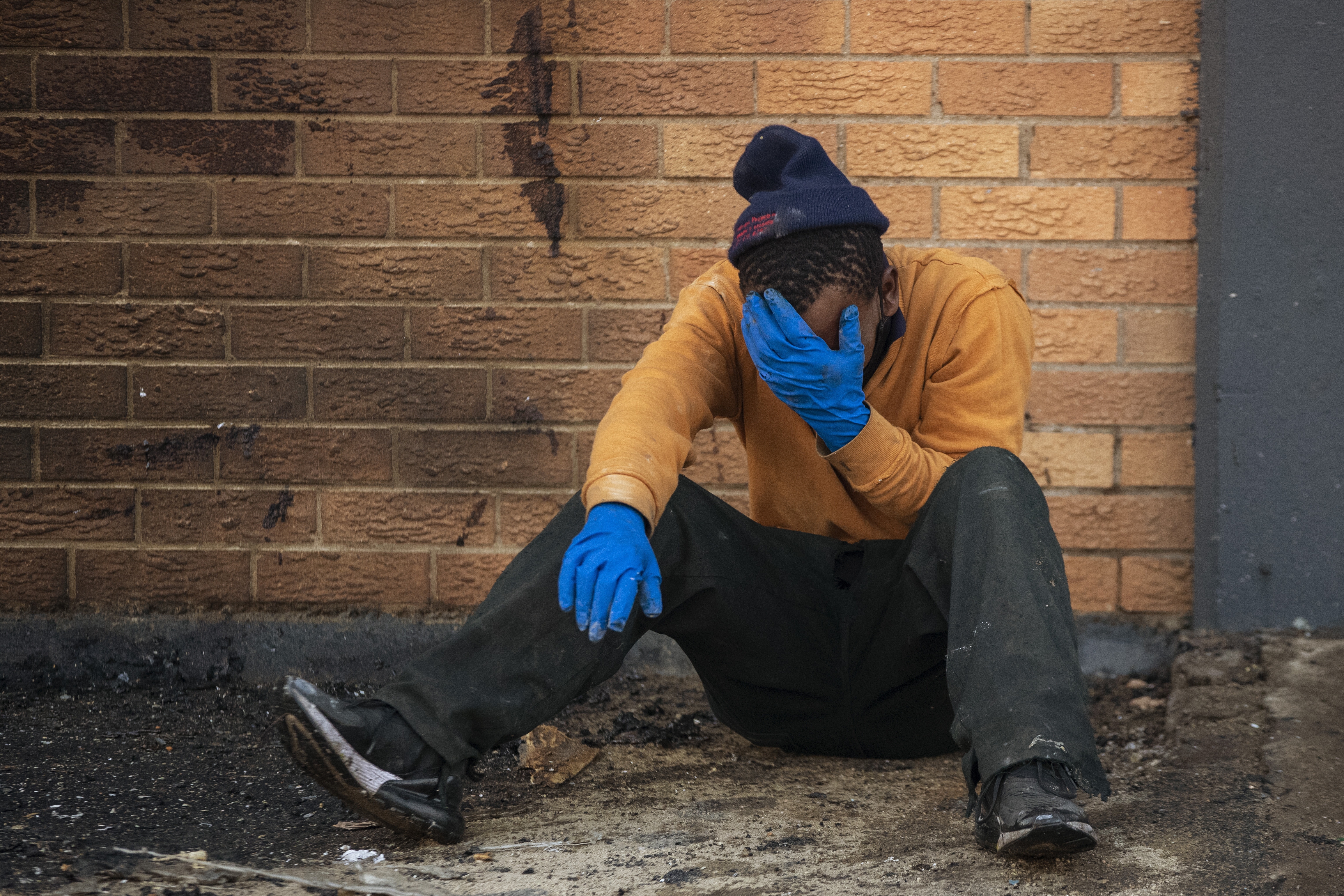 A family member reacts after police officers removed the body his brother from a burned shop in Johannesburg, South Africa, on Sunday. Associated Press/Photo by Themba Hadebe

The Gauteng province, which encompasses Johannesburg, and Zuma’s home province KwaZulu-Natal were the epicenters of unrest. At least 72 people died, and authorities arrested more than 1,200 others in the country since the protests began last week. Defense Minister Nosiviwe Mapisa-Nqakula said authorities deployed about 25,000 soldiers to aid the police in restoring order. Police Maj. Gen. Mathapelo Peters on Tuesday said many of the deaths happened during stampedes when looters targeted several shopping malls and carted away televisions, clothes, and food.

Last week, Zuma began a 15-month sentence handed down by the Supreme Court for failing to turn up at an inquiry into corruption claims during his nine-year tenure. Zuma has criticized the process as biased and appealed his sentence.

The protests and violence have disrupted the country’s ongoing vaccination program during a third wave of the coronavirus pandemic. Health workers asked people to reschedule vaccination appointments in some of the affected areas. The pandemic has caused more layoffs and hunger in a country where more than half of the country’s nearly 60 million people already live in poverty.

South African President Cyril Ramaphosa deployed the military and called for calm. “The path of violence, of looting and anarchy leads only to more violence and devastation,” he said. “This is not who we are as South Africans, this is not us.” —O.O. 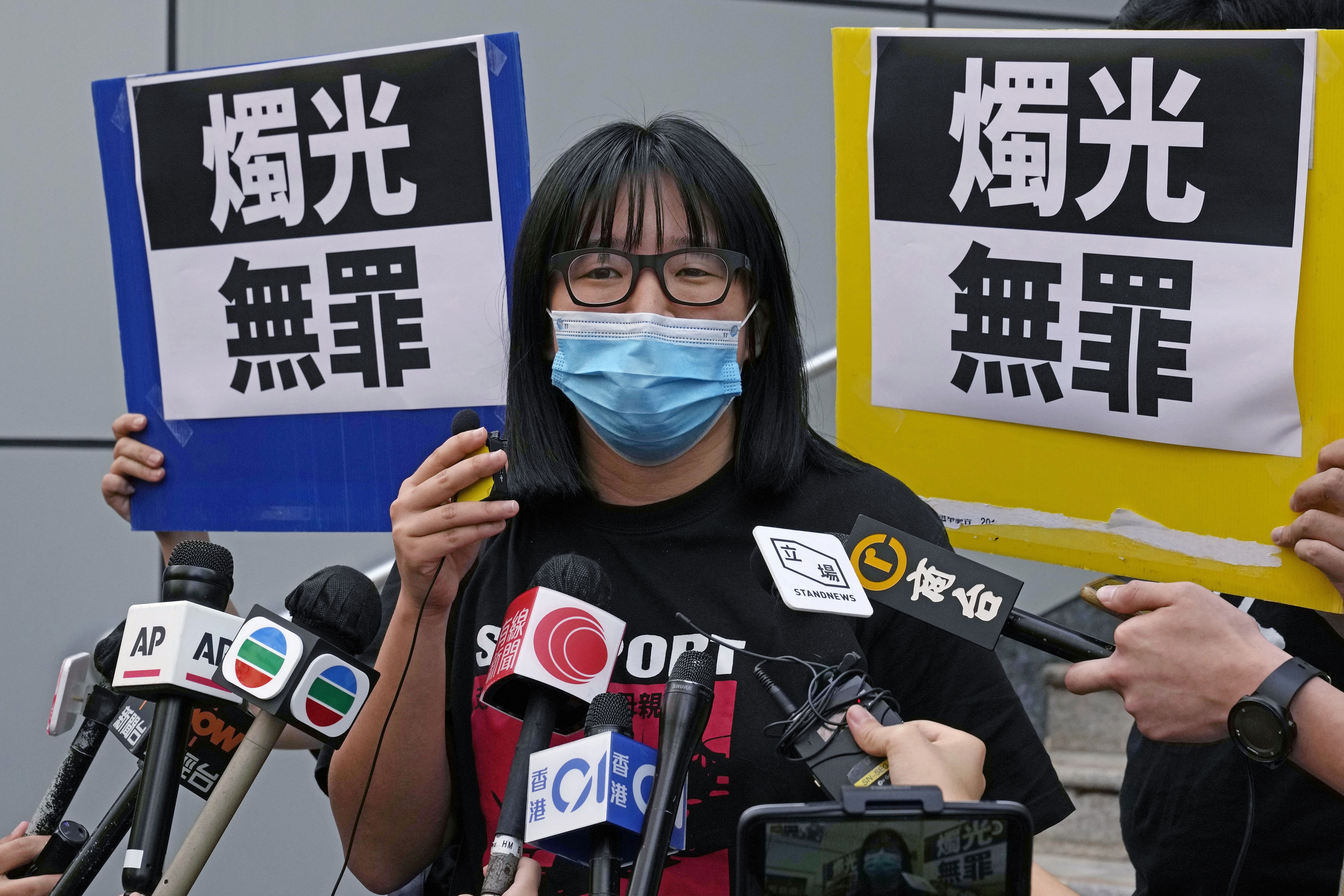 Chow Hang Tung, vice chairperson of the Hong Kong Alliance in Support of the Democratic Patriotic Movements of China, outside a police station in Hong Kong Associated Press/Photo by Kin Cheung (file)

One of the top pro-democracy civil groups in Hong Kong announced over the weekend that it would let go of all of its paid staff and downsize its organizing committee amid an intensifying crackdown from Beijing.

The Hong Kong Alliance in Support of Patriotic Democratic Movements of China in a Saturday statement said seven of its 14 steering committee members chose to step down over the “growing political and legal risks.” Three of the remaining members are currently serving jail time for protest-related activities. The alliance said it has been “particularly affected by the increasingly severe and obvious political repression.”

The 32-year-old group organized the Tiananmen Square candlelight vigil to remember the victims of the deadly 1989 massacre. Authorities banned the event for the past two years, citing pandemic restrictions.

After months of anti-government protests blocked the streets of Hong Kong in 2019, China imposed a sweeping national security law across the territory last year. In its statement, the group said “regardless of whatever difficulties or challenges we face, the alliance will continue to grit our teeth and move onwards one step at a time.” —O.O. 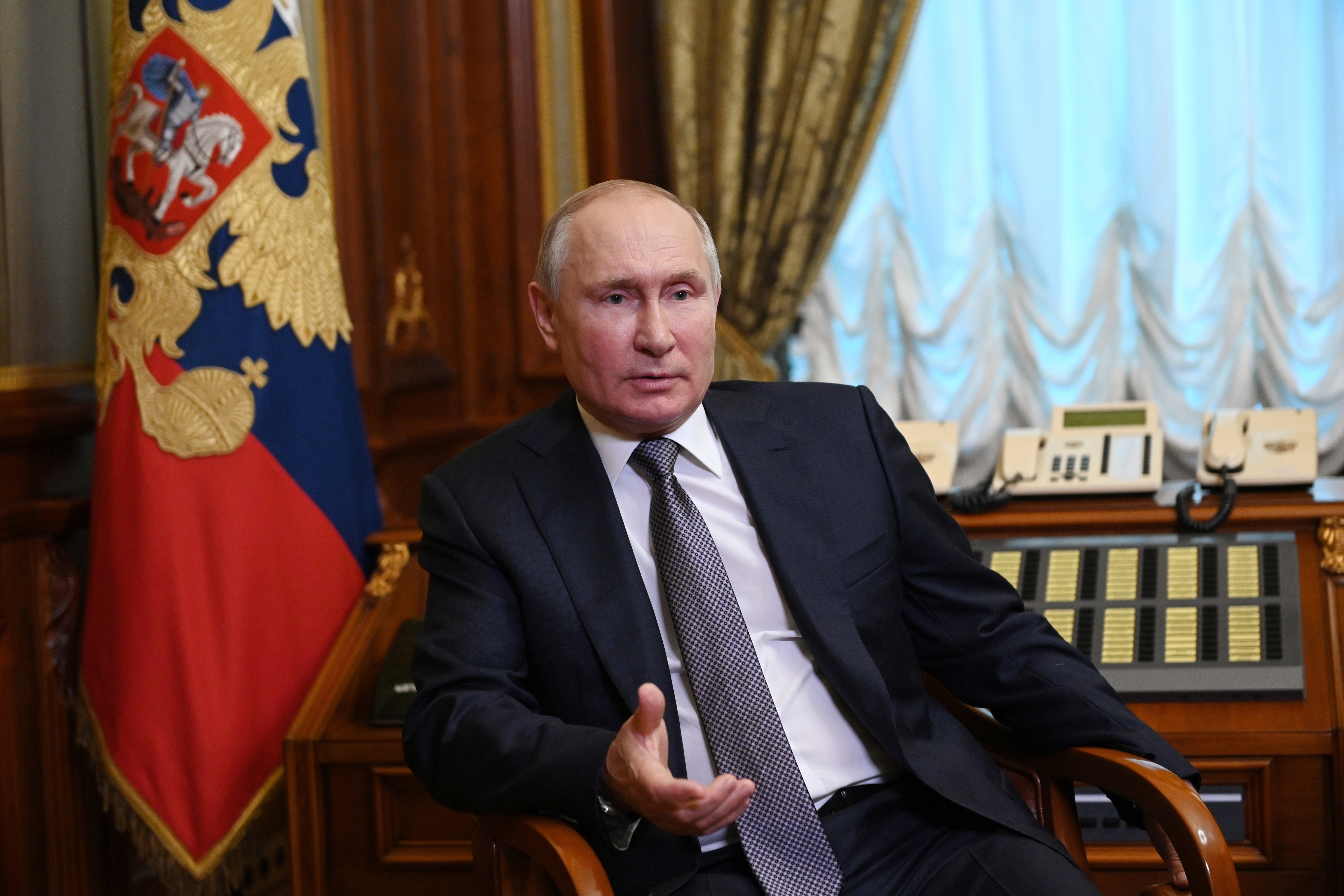 In an article published Monday in Russian and Ukrainian, Russian President Vladimir Putin described the two nations as “one people.” He added that Ukraine would enjoy stability and success only if it maintains friendly ties with Russia.

Relations have remained tense between the two nations since Russia annexed the Crimean Peninsula in 2014. The Kremlin has also backed separatist insurgents in eastern Ukraine in fighting that has killed more than 14,000 people over the past seven years. Russia positioned troops near Ukraine’s border earlier this year.

Putin accused Ukraine of failing to uphold its obligations under a 2015 peace deal, including granting autonomy to the eastern Donbas region. Ukraine acquired broad territories in the country’s southeast and other regions under the Soviet Union and unfairly retained the lands even after the union’s collapse, he said.

Ukrainian President Volodymyr Zelensky retorted that relations between the countries have been anything but brotherly, and that he has tried to meet with Putin for months without any progress: “It looks more like Cain and Abel.” —O.O. 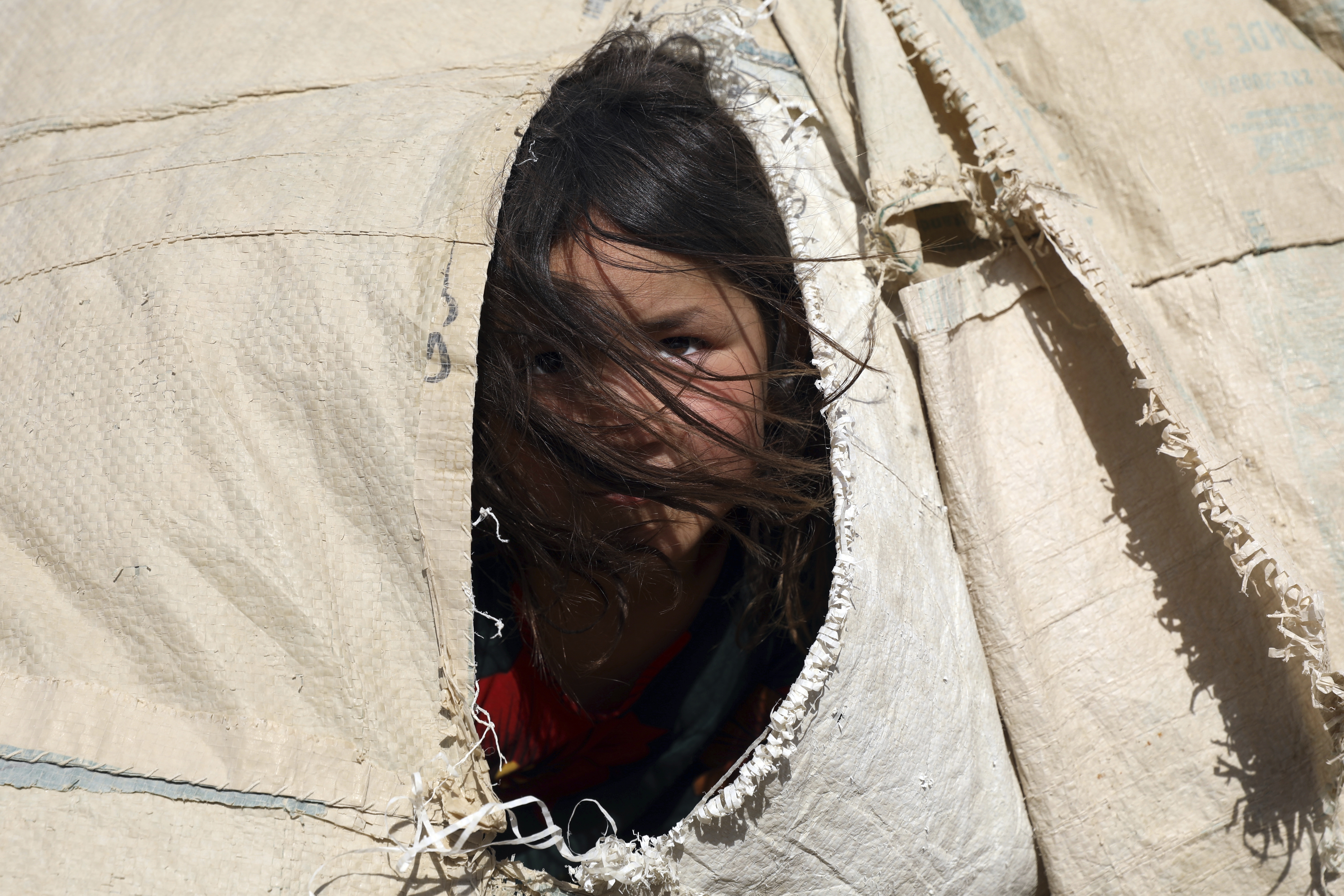 An internally displaced girl in a camp on the outskirts of Mazar-e-Sharif, Afghanistan Associated Press/Photo by Rahmat Gul (file)

As the Taliban insurgent group continues to push into Afghanistan’s northern region, more than 5,600 families have fled their homes in the past two weeks, according to the government’s Refugee and Reparations Ministry.

The region was a traditional stronghold of U.S.-allied warlords. The Taliban has moved into new territories as the U.S. withdrawal of troops nears completion after the 19-year war. Many Afghan troops have since fled into Tajikistan, which borders the region.

Families from the region who fled to camps in the provincial capital city of Mazar-e-Sharif recounted how the insurgents burned down a school and imposed taxes and fees in areas newly under their control.

The Biden administration on Wednesday said it would start evacuating Afghan interpreters and translators who worked with U.S. troops and their allies by the last week of July. On Tuesday, the French Embassy in Kabul urged “the entire French community” to leave the country. The embassy said France would organize a special weekend evacuation flight and could no longer guarantee a safe evacuation afterward. —O.O.