A Ukrainian soldier is seen at fighting positions on the line of separation from pro-Russian rebels near Donetsk, Ukraine, Monday, April 19, 2021. Roma Mostetskiy/Associated Press Photo 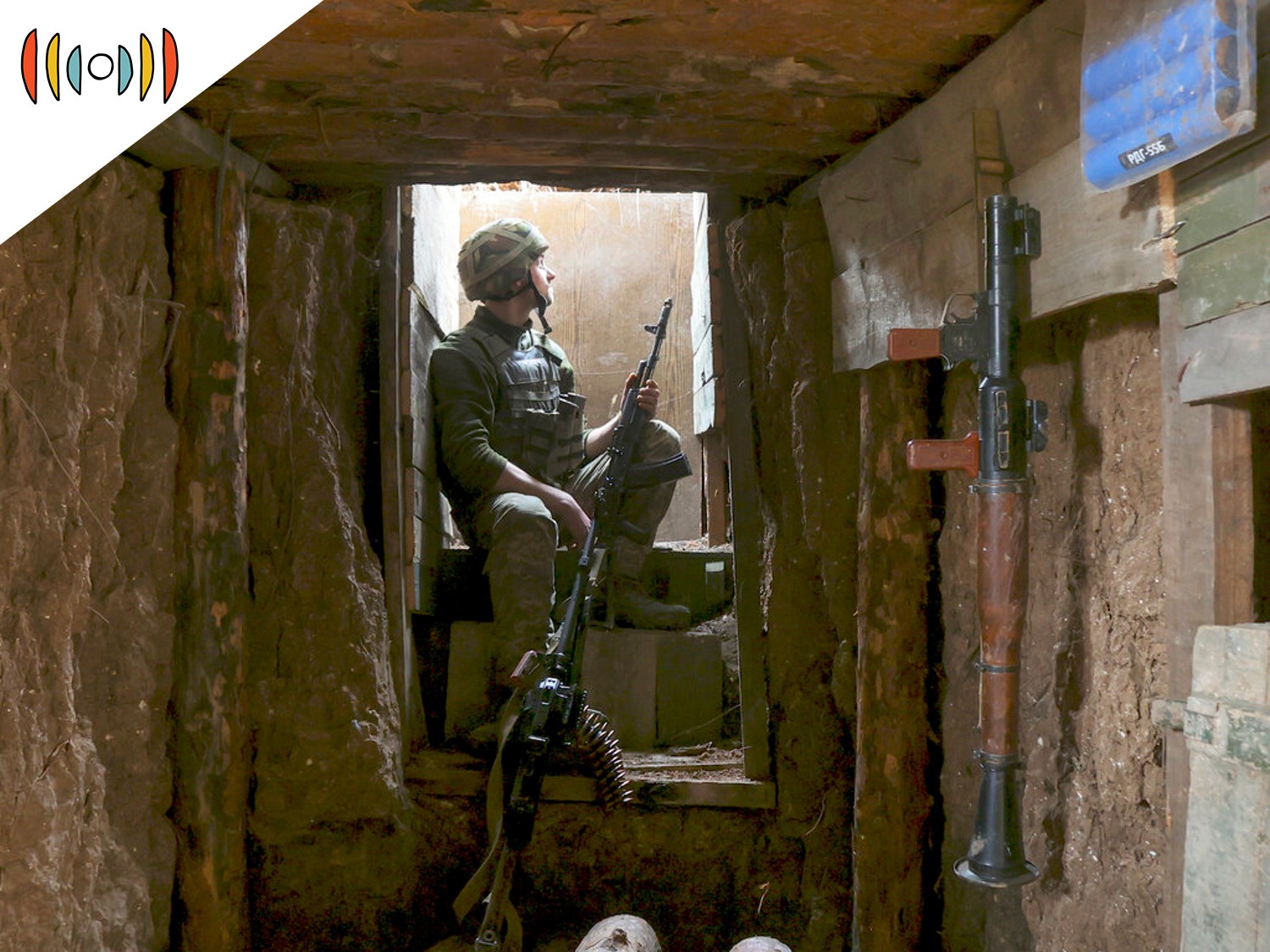 First up: Moscow flexes its muscles.

Russia on Friday began withdrawing troops from its eastern border with Ukraine. This, after weeks of escalating tensions with Western powers over a series of military drills.

But artillery left behind leaves with it a threat of return.

REICHARD: Russia and Ukraine have been locked in conflict since 2014. That’s when Russia invaded and illegally annexed the Crimean Peninsula.

So, what’s behind the Kremlin’s latest provocations? And is the crisis over? WORLD correspondent Jill Nelson reports.

JILL NELSON, REPORTER: When fighting broke out in 2014, the Kremlin denied any direct involvement with the bloodshed in Ukraine. The media began using the term “little green men” to describe the soldiers who appeared on Ukrainian soil in unmarked uniforms.

But this time around, world powers were watching more closely for Russian aggression and Kremlin spin. And State Department Spokesman Ned Price made it clear last week that the United States will remain vigilant.

PRICE: Well, we have heard Russia’s announcement—its announcement that it would begin withdrawing troops from the border of Ukraine. As I’ve said, we’ve heard words. I think what we’ll be looking for is action. The United States will continue to monitor the situation.

So what was behind Russia’s military surge? Steven Pifer is a senior fellow at the Brookings Institution and a former U.S. ambassador to Ukraine. He says the recent aggression was most likely an attempt to intimidate Kyiv. And Russian President Vladimir Putin’s way of testing the Biden administration.

PIFER: Putin wants a meeting. You know it doesn't matter Biden called me a killer, but he wants that meeting because that's part of the validation of Russia as a great power.

And Putin may get his meeting. On April 13th, President Joe Biden called his counterpart in Moscow and proposed a summit. But his administration also hit Russia with a new round of sanctions for both threatening Ukraine and meddling in U.S elections. The Kremlin responded by expelling 10 U.S. diplomats.

In an armed conflict, Russia would have the upper hand. But the Ukrainian army is more prepared than it was in 2014 and would put up a fight. Pifer says Putin may have calculated that cost.

PIFER: I’m not sure from Vladimir Putin’s perspective having Russian soldiers come home in body bags is an attractive appearance. Taking Crimea in 10 days in a bloodless campaign was wildly popular. You know getting bogged down in a long conflict in Ukraine where you’re losing troops every day, I’m not sure that helps him and he has parliamentary elections coming up in the fall.

Pifer says the two countries have likely avoided a full-scale confrontation for now. It remains unclear how many forces will stay behind and where they’ll be located.

If Russia fails to follow through with its troop withdrawal and tensions escalate again, Pifer says we should publicly signal our commitment to Ukraine.

PIFER: I think it would be a useful message to the Russians if you had a C-17 flying into Kyiv with pallets full of javelin anti-armor missiles. The Russians have calculated, and they're probably correct, that the United States and NATO are not going to send troops to defend Ukraine. But we can certainly make it clear that we’re prepared to pump in weapons to help the Ukrainians better defend themselves.

Sergey Rakhuba is president of the U.S.-based ministry Mission Eurasia. He grew up in eastern Ukraine and has relatives in the area. They have been nervous about the troop buildup.

RAKHUBA: They are making plans. In case of the war, what do they do? So they have suitcases packed and waiting.

He says ministry opportunities increased dramatically when the coronavirus pandemic hit Ukraine. Poor healthcare left many turning to the church for help and spiritual guidance.

A Russian takeover of more Ukrainian territory could jeopardize the church’s work.

RAKHUBA: I doubt and really hope that an invasion won’t happen. But if it will then the Russian Orthodox Church will be the main religious force in all the territories where Russia controls those areas.

RAKHUBA: They create the laws that regulate religious affairs in a way so that they don’t leave any room for any other religion groups but Russian Orthodox Church.

That’s one reason to lend support to Ukraine. Pifer lists two more: Allowing Russia to grab land in Ukraine gives Moscow a green light to invade other small countries, like the Baltics. And he says we owe Ukraine.

PIFER: Over the last 30 years the Ukrainians have done things that mattered a lot to us, including giving up nearly 2,000 strategic nuclear weapons that were designed, built, and deployed to strike at the United States.

Ukraine’s foreign minister welcomed the Russian troop drawdown but reminded world leaders that the conflict is not over. He said Russian leaders need to do more to curb ongoing violence between Russian separatist and Ukrainian forces in eastern Ukraine. And he says Moscow owes Kyiv an explanation for the military buildup.

RAKHUBA: Pray for spiritual leaders. Pray for churches. Pray so that they find a peaceful solution.