As Hong Kong comes to terms with a crackdown on free speech, prayer meetings remain a refuge for pro-democracy citizens

With heart-shaped sticky notes in hand, participants of an annual prayer meeting on July 1 walked down the aisles of Holy Cross Church in Hong Kong and posted their prayer requests on two boards at the front of the sanctuary. It was the 24th anniversary of Hong Kong’s handover to China, which coincided with the 100th anniversary of the founding of the Chinese Communist Party.

The pastel sticky notes carried heavy-hearted messages: “Lord, please grant Hong Kongers and the Chinese government wisdom, so we can all keep living in a Hong Kong with justice and rule of law,” read one. Others asked God for the release of political prisoners and for freedom in Hong Kong.

Around 400 citizens attended the Catholic church service in Sai Wan Ho. After the annual meeting, participants typically head to massive pro-democracy marches, a yearly event protesting the 1997 British handover of Hong Kong to China. But this is the second year the government has banned rallies, citing pandemic precautions. The real reason: to quash political dissent against the Chinese Communist Party’s rule, a crime punishable under a Hong Kong national security law passed in June 2020.

Enforcing that ban on rallies, 10,000 police officers patrolled the city on July 1. Officers blocked off Victoria Park, stopped and searched citizens, and arrested at least 19 people, including activists who were handing out “seditious” materials.

Prayer meetings hosted by churches and the Justice and Peace Commission of the Catholic diocese—which organized the July 1 meeting—are one of the few remaining occasions Hong Kongers can gather publicly around politically sensitive issues. Since Beijing imposed the national security law on Hong Kong, authorities have detained pro-democracy leaders, forced the shutdown of the pro-democracy paper Apple Daily, enforced patriotism requirements for political candidates, and added film censorship rules. On Sunday, the Hong Kong Civil Human Rights Front, a pro-democracy organization that is reportedly under police investigation, announced it would disband.

Churches wonder when authorities may clamp down on them next: Several outspoken pastors have fled overseas, several churches have closed, and many of the remaining pastors now speak cautiously from the pulpit.

“On the surface, society seems to have quieted down, but people’s hearts are still ill at ease and the split in society is still severe,” one speaker prayed at the Holy Cross Church service. “We have become lost in fear and can’t find our way out of darkness. Lord, please lead us.”

ON JUNE 26, two days after Apple Daily’s shutdown, the Justice and Peace Commission held a prayer meeting dedicated to press freedom in Hong Kong. Leading the 100 or so attendees in prayer at St. Andrew’s Church in Hang Hau was Chan Pui-man, Apple Daily’s associate publisher. She was among several Apple Daily staffers arrested for alleged foreign collusion. Temporarily released on bail, Chan prayed through tears for God to protect those who were imprisoned for safeguarding truth, including her colleagues. (Police took Chan into custody again in July.) 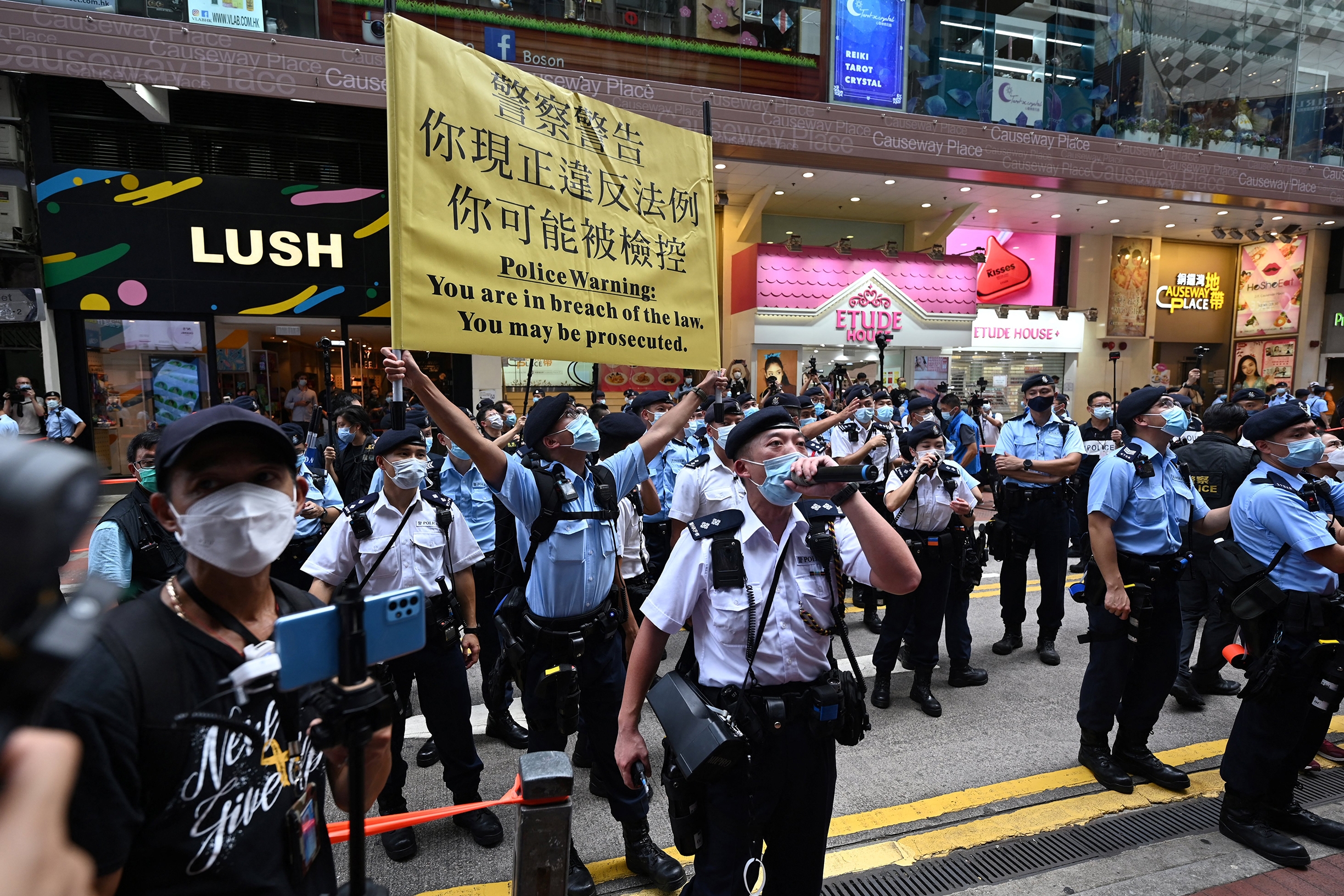 Police in Hong Kong hold up a warning banner and instruct people to move on during the July 1 anniversary of Hong Kong’s handover from Britain to China. Photo by Peter Parks/AFP via Getty Images

How long churches can continue to serve as a sanctuary for citizens commemorating politically sensitive dates and addressing controversial topics is unclear.

“I think the government will still let it happen for the foreseeable future,” said Kin Yip Louie, a theology professor at Hong Kong’s China Graduate School of Theology. “The impact in society is not too big and it’s too draconian to limit these prayer meetings.”

He noted that although the Justice and Peace Commission is vocal, it is relatively small and doesn’t have much influence within the Catholic hierarchy. Still, the organization has faced attacks. The morning of the June 4 Masses, unknown individuals hung banners outside the seven host churches, accusing them of leading church members to violate the national security law. State-owned newspaper Ta Kung Pao also singled out and criticized members of the Catholic group.

When it comes to Hong Kong’s broader religious freedoms, Louie finds the situation deteriorating as uncertainty hangs over the churches. Due to the vague wording of the national security law, it is unclear if even quoting Luke 20:25, “Render to Caesar the things that are Caesar’s, and to God the things that are God’s,” would count as incitement of hatred and disloyalty toward the Chinese Communist Party, Louie noted. The same goes for claiming the lordship of Jesus Christ, which may be construed as treason against the state.

Self-censorship and fear are prevalent, Louie said. The theology professor used to receive invitations from churches to speak on faith and politics, but those stopped coming after 2019. “The church is refraining from doing things, rather than the government suppressing it.”

His seminary has also stopped hosting public talks by prominent Christians about how to practice justice in society. Louie said that wasn’t due to worries the police will shut down the school, but because in the tightened environment, speakers would speak so carefully that the talks would no longer be helpful. Or if they go into specifics, attendees may feel uncomfortable with content that crosses the line. As a result, the seminary now restricts access to talks on sensitive issues, sometimes only extending the invitation to alumni.

Within the Roman Catholic Church in Hong Kong, Cardinal John Tong Hon has directed priests to exclude political opinions from homilies. In a letter to clergy, sent two months after the national security law went into effect, Tong warned that “words that insinuate or incite hatred along with libelous, offensive speech conducive to societal unrest are against the Christian spirit. They are absolutely inappropriate during service.”

WHILE CHURCHES IN HONG KONG still remain free to evangelize and make disciples, some pastors do not feel safe. Several outspoken pro-democracy pastors have already left Hong Kong and moved to Taiwan and the United Kingdom. In April, Lo Hing-choi, the former president of the 80,000-strong Baptist Convention, left for the United Kingdom 10 days before his term of presidency ended. He had openly criticized the government during the 2019 protests and opposed the national security law.

Despite becoming a target of the state-run Ta Kung Pao, Lo hadn’t planned to leave until he saw the regime going after activists and lawmakers he considered politically moderate, he explained in a letter published in Christian Times.

“The biggest and even the only reason” to emigrate, Lo wrote, “is the change in Hong Kong, the restriction of freedom, and government policies that have forsaken the principles and foundation of reason and fairness.”

Some churches have closed too. Pastor Frankie Ng of Ekklesia Hong Kong, a church that had participated in pro-democracy protests and signed a joint statement condemning police violence, told local media the church disbanded July 1 for the safety of its members. The church feared government reprisal. Its website, social media accounts, and YouTube channel have all been deleted. Good Neighbor North District Church, whose members mediated between pro-democracy protesters and police at the front lines of the 2019 demonstrations, also closed at the end of May. The shutdown came after authorities froze its assets, a move that is likely politically motivated.

Louie, an ordained pastor, said he has no intention of leaving Hong Kong. After the 1989 Tiananmen Square massacre, he felt that China needed the gospel and sought to pastor the people of Hong Kong. Even if he must self-censor about politics and lose his right to vote, he plans to continue his calling. But he draws the line at promoting the Chinese Communist Party from the pulpit, which pastors in China’s state-controlled Three-Self church have recently been forced to do.

It’s still unclear whether authorities might crack down on churches soon. Because many congregations meet in government-subsidized schools and publicly funded community centers, the government could restrict venues from renting out space to the same organization every week, disrupting church operations. For other churches meeting in buildings of mixed commercial and residential uses, authorities could use fire regulations to limit the number of people gathering, as they have done in mainland China.

“We fear the government may change some regulations to make life more difficult for the church, [but] we don’t know what the government will do yet,” Louie said.