Amid political suppression, Hong Kong citizens find ways to commemorate the 32nd anniversary of the massacre

For the first time in 32 years, Hong Kong’s Victoria Park remained empty on Friday, the anniversary of the 1989 Tiananmen Square massacre. Tens of thousands of people normally light candles at the park each June 4 to commemorate those who died when the Chinese military cracked down on peaceful pro-democracy protests.

This year, Hong Kong deployed 7,000 officers to prevent people from attending the banned vigil. But residents still roamed the Causeway Bay area and lit up their phones to mark the anniversary.

On the first Tiananmen anniversary after the passage of Hong Kong’s draconian national security law, St. Francis of Assisi Church and six other Catholic churches were some of the few permissible places for public gatherings to remember the massacre. Hong Kong authorities banned the annual candlelight vigil for the second consecutive year, again citing pandemic precautions. Many residents consider the move political since daily COVID-19 cases have remained low and authorities allowed other large-scale events, such as an indoor art fair.

Around 300 Hong Kongers—many dressed in black—attended a special Mass at St. Francis of Assisi Church in Shek Kip Mei to commemorate the massacre. Residents lined up two hours before the 8 p.m. service to secure a seat since pandemic regulations require the church only seat 30 percent capacity. Sitting two to a pew, attendees listened as the event organizer read the names of Tiananmen victims. Speakers mentioned the injustice the victims faced as they died in pursuit of truth.

Wearing a black T-shirt emblazoned with “We are Hong Kongers,” Alicia, who only gave her first name, said she worries authorities will ban even religious services for Tiananmen next year as Hong Kong becomes more like mainland China. Still, the teacher in her 40s took to heart Friday’s homily. “We need to have faith in the Lord, in Jesus, because ultimately there will be justice, but … we need to wait and have patience,” she said. 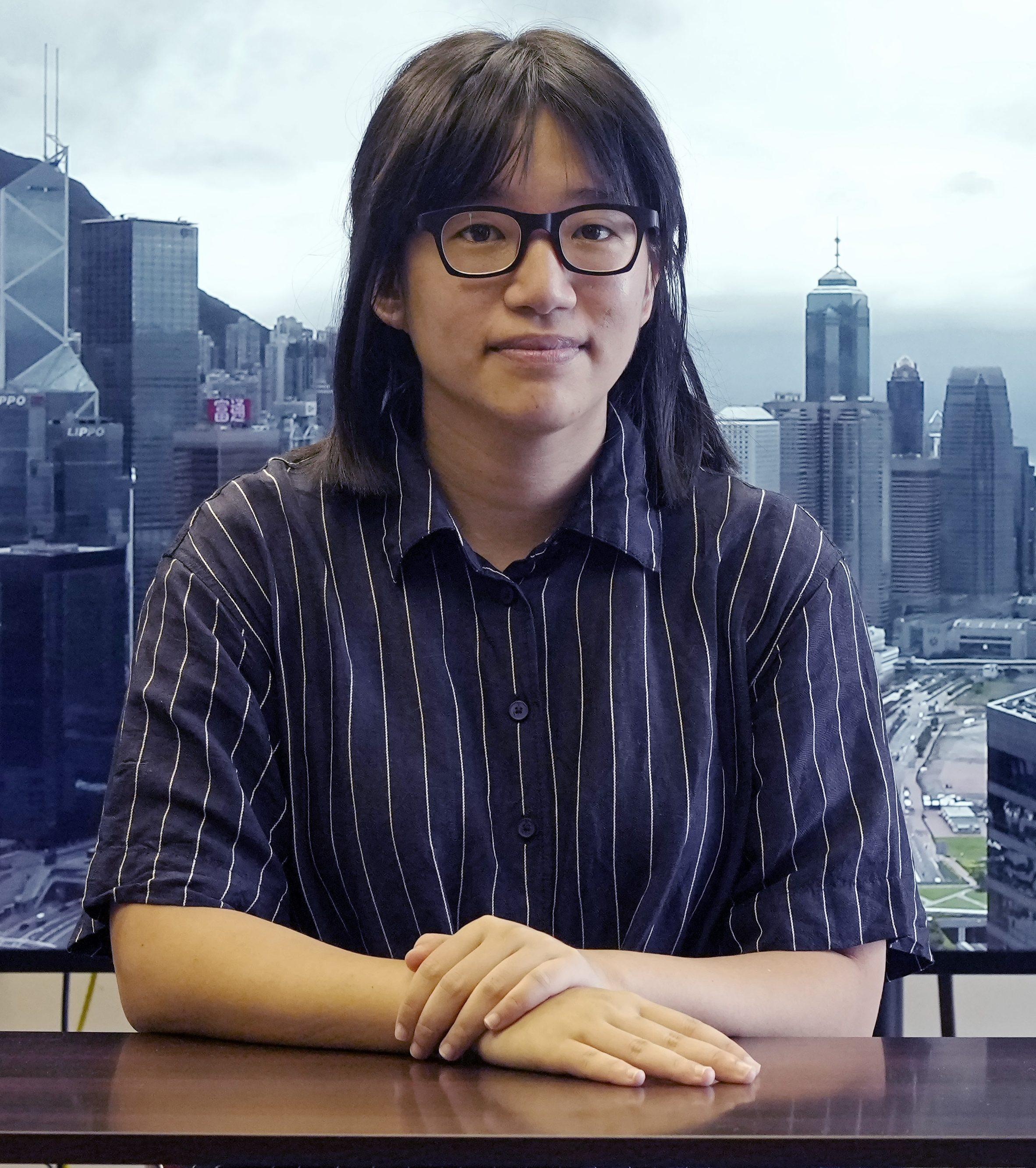 On Friday morning, police arrested Chow Hang Tung, an organizer for the vigil, on suspicion of promoting an unlawful assembly. The government warned that anyone who participates in or publicizes the vigil could face up to five years and one year in prison, respectively. As Hong Kongers held up their phones’ flashlights while roaming Causeway Bay, some chanted words of encouragement or sang popular protest songs. By the end of the night, police arrested at least eight people. Allegations include promoting the banned vigil, disorderly behavior, and obstructing the police.

The Chinese government’s increasing control over Hong Kong—criminalizing dissent, arresting pro-democracy activists, and smothering democracy—has led Hong Kongers to relate more to the victims of the massacre. Beginning in April 1989, student protesters gathered in Beijing’s Tiananmen Square calling for democracy and an end to corruption. Chinese authorities instead sent tanks through Beijing to clear the square, killing hundreds and possibly thousands of civilians. The Chinese government still refuses to acknowledge the crackdown on peaceful protesters and tries to censor any mention of it in mainland China.

Hong Kong authorities also closed the city’s June 4th Museum on Wednesday, claiming it failed to obtain a license for an “entertainment venue.” Museum organizer Richard Tsoi said he believes the motive is political since the free museum has operated since 2012.

On the afternoon before it closed, dozens of Hong Kongers streamed steadily through the museum on the 10th floor of a commercial building in Mong Kok. Tina Chan (WORLD is using a pseudonym to protect her from government reprisal) wiped away tears as she watched footage of the massacre playing on a TV screen. Although she had seen it before, Chan said watching the footage is more emotional now after the Hong Kong police’s brutality during the 2019 protests.

The museum includes a timeline of the 1989 protest movement, victims’ belongings, and books filled with newspaper clippings about the massacre. Guests laid white chrysanthemums in honor of the deceased by a photo of the Goddess of Democracy statue.

In one corner, a high-school student in his school uniform perused books on the event. Hin Wong said he had never attended the vigil but had come to the museum two days in a row to learn the truth about Tiananmen. “My school won’t teach these things,” said Wong, whose name WORLD also changed. “We can’t bury the truth.” 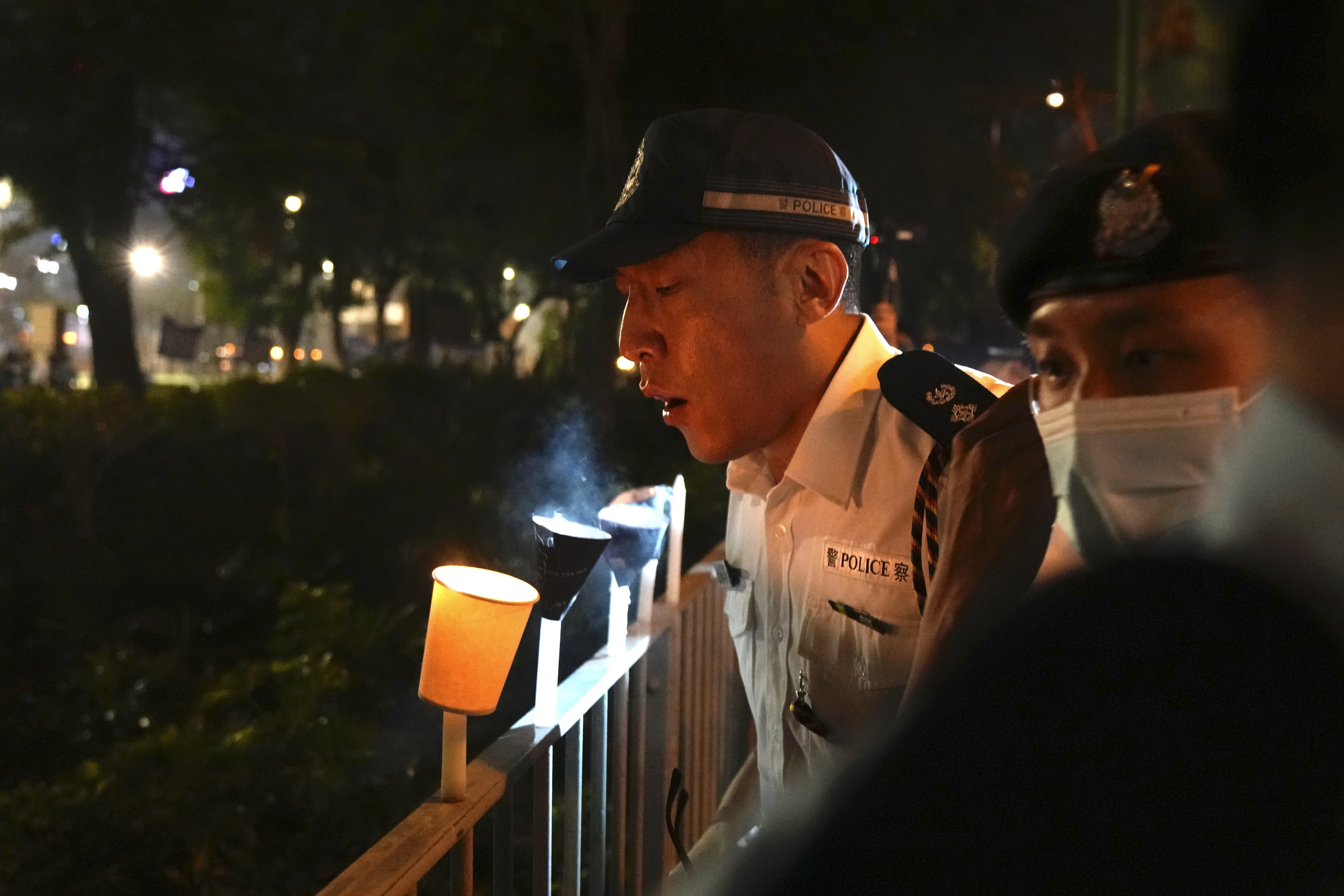 Hong Kong police officers blow out candles lit by people marking the anniversary of the military crackdown on a pro-democracy student movement in Beijing in 1989. AP Photo/Kin Cheung

In Taipei, Taiwan, the annual Tiananmen vigil in Liberty Square also looked different this year. Taiwan currently faces its worst COVID-19 outbreak after evading the virus for more than a year. Human rights groups had set up a small memorial for Tiananmen victims with photos from the crackdown, funeral flowers, and a memorial tablet. As torrential rain poured, COVID-19 protocol allowed only one or two people to walk under the tent covering the memorial and place white lilies in remembrance.

In the evening, several Taiwan human rights groups held an online commemoration. With about 200 viewers, the livestream featured pre-recorded speakers including former student protesters who participated in Tiananmen (now in their 50s), Chinese dissidents, exiled Hong Kong activists, Taiwanese lawmakers, as well as a Myanmar protester, a Tibetan activist, and a Thai protester. Their common theme was combating authoritarianism, namely the Chinese Communist Party (CCP). The hosts of the livestream asked viewers to observe 64 seconds of silence at 8:09 p.m., the numbers signifying the date of the massacre.

In one video, exiled Hong Kong activist Sunny Cheung noted that Tiananmen was an early warning to the world not to trust the CCP, a lesson he saw play out in Hong Kong. Because Cheung attended last year’s banned Tiananmen vigil and participated in last July’s primaries, he would face arrest if he returned to Hong Kong. This year, his heart felt heavy: “For many years the fact that Hong Kong could commemorate June 4 meant it was different from other parts of China: we had some democracy and freedom, we had space.”

—June Cheng contributed to this report