Earlier this month, the global bank HSBC froze the bank account of Good Neighbor North District Church, a Hong Kong church known for political activism, along with the accounts of the church’s pastor, Roy Chan, and his wife.

The Dec. 7 banking freezes, requested by Hong Kong police, are viewed by many as politically motivated. Pastor Chan is the founder of Protect the Children, a group that aided demonstrators during Hong Kong’s recently suppressed pro-democracy protests. Volunteers from the church were often on the front lines and sought to mediate between protesters and riot police. 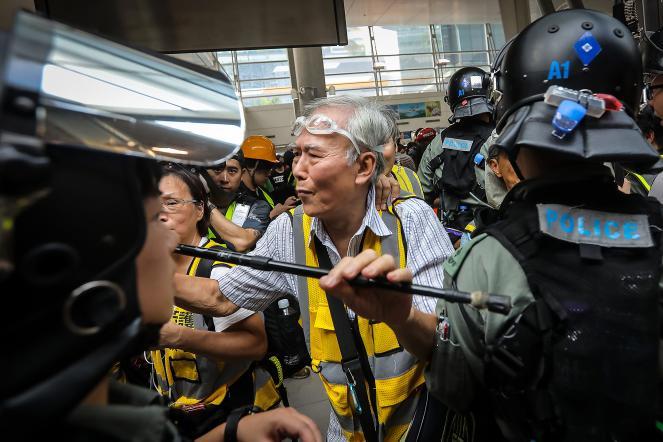 Protect the Children volunteer “Uncle Wong” shields protesters from the police, along with other “silver hair” volunteers in the Tung Chung district in Hong Kong during 2019 demonstrations. Vivek Prakash/AFP via Getty Images

Observers in Hong Kong and elsewhere worry the banking freezes signal a form a political retribution under the new national security law that Chinese authorities forced on Hong Kong earlier this year.

The police claim they froze the accounts because of money laundering and fraud. According to officials, the church received $3.5 million between June 2019 and September 2020 but reported it had raised $1.1 million. Officials also say the church’s expenses do not match the stated purposes of its crowdfunding campaigns. The maximum penalty for money laundering is 14 years in prison and a fine of $645,000.

Chan has insisted all the money the church, a registered charity, received through crowdfunding is legal. “What the church is facing now is religious suppression, social welfare suppression, and political suppression,” said Chan in a video posted on Facebook on Dec 8.

Chan did not respond to my requests for comment. In a Dec. 9 Facebook post, the church said it hires an accountant for annual audits to ensure compliance with government regulations.

One day after freezing the accounts, police officers searched the church’s premises in Kwun Tong and Fanling, in addition to three hostels that are part of the church’s homeless ministry. Authorities also arrested two church staffers and have ordered the arrest of Chan and his wife, who are currently overseas on sabbatical in the United Kingdom, where they were considering setting up a church plant.

Christian and social welfare groups ran a full-page ad on Dec. 24 in the pro-democracy newspaper Apple Daily that condemned the political suppression of Good Neighbor Church. The church has launched a Change.org petition that has garnered over 24,000 signatures and calls on HSBC to unfreeze the accounts.

Other Christian groups have spoken up for the beleaguered church. One petition says the police selectively disclosed Good Neighbor’s financial information in order to smear the church. (Chan says he has refrained from discussing church finances for legal reasons.) Another petition likens the church’s plight to that of former pro-democracy legislator Ted Hui. Police, who accused Hui of money laundering, also requested HSBC freeze his and his family’s accounts. Although Hui denies the police claims, HSBC froze the accounts shortly after the activist declared his exile in the U.K. with his family. He had raised money for legal actions against the government prior to his resignation from the legislature in November.

The freezing of accounts “reflects that under the national security law, banks can just freeze citizens’ assets due to political pressure, which seriously undermines the credibility of Hong Kong’s banking and financial systems,” the ex-lawmaker wrote on Facebook on Dec. 6, calling the government’s move an act of “political revenge.”

For the church, the most direct impact from the frozen accounts is the disruption to its homeless ministry that began in 2014, Chan said in his video statement. Without money to pay rent for the 30 hostel beds and salaries for four social workers, the church would have to turn away 70 or so beneficiaries, who might find themselves back on the streets.

With its account frozen, the church has sought legal advice and announced it can no longer accept donations and offerings. To maintain operations, including weekend worship services, staffers have had to work without pay.

Chan resigned from the church on earlier this month “to reduce the legal risk to others” and has followed legal advice to remain silent on the arrests of the two staffers to “protect” them, he said in recent Facebook posts. However, 20 employees have reportedly also resigned. In an anonymous statement sent to local media outlets on Dec. 26 and published by the Christian Times, the 20 employees said they feel “disappointment” and “distrust” toward Chan, who they claim “has not taken seriously the safety of the staff.”

With several employees remaining, Good Neighbor Church continues to support pro-democracy protesters by posting information on its Facebook page on court hearings for arrested demonstrators. Police have arrested over 10,000 citizens in connection with the protest movement that began in June 2019.

As for Chan, he has set up an account on the crowdfunding platform Patreon to support his wife and three daughters.

Because of the political suppression, Chan said, “I have been forced to not be able to return to Hong Kong, my own home.”

The Shenzhen court sentenced eight members of the group to seven months in prison for illegally crossing China’s border. It handed two- and three-year prison sentences to two others for organizing the crossing. Chinese authorities did not charge the remaining two activists, who are minors.

Chinese authorities have denied the detainees access to lawyers hired by their families. Family members who were barred from the court hearing that began on Monday called the procedure a “de facto secret trial” in a statement. Earlier this month, the U.S. Embassy in China called for the immediate release of the 12: “Their so-called ‘crime’ was to flee tyranny. Communist China will stop at nothing to prevent its people from seeking freedom elsewhere.”