On Aug. 29, the United Nations humanitarian chief painted a dire outlook for Afghanistan, a country long ravaged by war and now governed by terrorists. An estimated 6 million Afghans are at risk of starvation, and winter is coming. In just three months, temperatures in the capital city of Kabul will begin to dip below freezing.

“We’re up against time,” Martin Griffiths told the UN Security Council in a virtual address. “The consequences of inaction on both the humanitarian and development fronts will be catastrophic and difficult to reverse.” Griffiths urged international donors to reinstate funding for economic development and provide $770 million in aid to Afghans for shelter, warm clothing, food, and other supplies.

Aug. 30 marked a year since the U.S. withdrawal from Afghanistan abruptly ended a 20-year war with the Taliban, restoring the repressive Islamist regime to power in a country that has seen little peace since 1978. Since the U.S. pullout, the country’s economic and humanitarian crisis has snowballed as the international community halted large-scale development aid, governments froze billions of dollars in Afghan assets, and many nongovernmental organizations (NGOs) left the country.

Millions of Afghans are now struggling to survive. But the Taliban’s harsh rule, along with ongoing violence and persecution in the country, continues to stymie aid groups that could provide desperately needed help. Meanwhile, political divisions persist over how outside governments can boost Afghanistan’s economy while still sanctioning its extremist leaders. 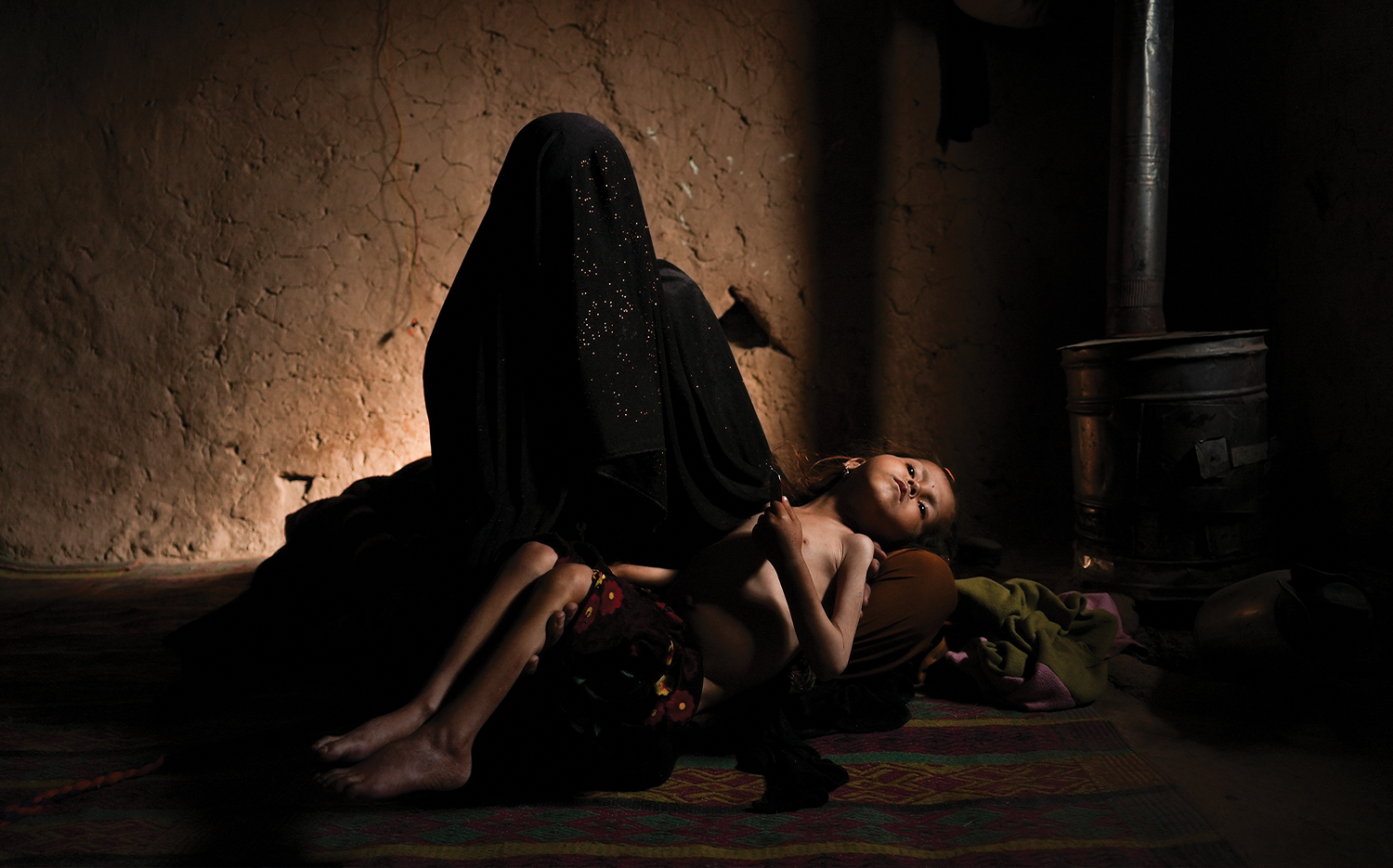 A woman holds her 4-year-old daughter, who is suffering from acute malnutrition, at their house near Herat. Mstyslav Chernov/AP

The watching world sharply criticized the United States for abandoning its Afghan allies behind Taliban lines (see “Abandoned in Afghanistan,” Aug. 27). But U.S. Ambassador Linda Thomas-Greenfield told the UN Security Council that the Taliban bears the blame for the current crisis, citing policies that “repress and starve the Afghan people instead of protecting them.”

Currently, more than half the country’s population—about 24 million Afghans—needs assistance. Of those, 19 million are facing acute levels of food insecurity, Griffiths said. According to a survey by the nonprofit Save the Children, only 3 percent of Afghan families say they are able to meet their households’ basic needs.

“Humanitarian organizations don’t have the capacity to meet the growing needs of the Afghan population,” said Lucien Christen, spokesperson for the International Committee of the Red Cross in Afghanistan, in an email to WORLD. Christen cited the challenges of increasing electricity shortages, ­contaminated water, and limited access to healthcare.

Many U.S.-based aid groups have largely left the country. One, Joint Development Associates International, worked in Afghanistan for 20 years rebuilding infrastructure and hosting agricultural and hygiene training programs, but pulled out last year when the Taliban overran Kabul. CEO Bob Hedlund said returning would require hiring and training hundreds of new staffers and somehow keeping the Taliban from appropriating aid money. Instead, he is sending money to ­support Afghan staff members still trapped in the country and helping resettle others.

Sometimes small, undercover ­operations—either smuggling aid to endangered Christians and Afghan allies stuck in the country or helping them emigrate—is the best smaller aid groups can do.

“If a truckload of food showed up at the border of Afghanistan, we know it’s likely to be siphoned off and used for other purposes … we have to work covertly,” said Jeremy Frith, CEO of Lancaster, Pa.–based Barnabas Aid. The Christian organization relies on “trusted partners” in neighboring countries to ensure supplies and funds reach the hundreds of Afghan Christians it still supports, Frith said.

Jennifer Cervantes of Spero Worldwide said her group currently has 10 aid workers in Afghanistan. After the U.S. withdrawal, Spero established 42 “safe houses” with food and medical supplies for Afghan allies ­hiding inside the country. But in May, it had to close the houses due to ­insufficient funding. Now the group primarily works to help at-risk families get out of Afghanistan, but “the window is closing as the Taliban becomes more established,” Cervantes said.

Meanwhile, 32 NGOs recently released a joint statement calling on the international community to unfreeze the country’s central bank assets amid “widespread hunger, unemployment and near universal poverty,” The Guardian reported. But a year after the Taliban takeover, the Biden administration declined to release $3.5 billion in frozen Afghan assets. The administration noted that the Taliban had been sheltering al-Qaeda leader Ayman al-­Zawahri, who was killed by an American drone strike in late July. Earlier this year, the Taliban government also appointed a man the United States has labeled a global terrorist to help lead Afghanistan’s central bank.

“No country that is serious about containing terrorism in Afghanistan would advocate to give the Taliban instantaneous, unconditional access to billions in assets that belong to the Afghan people,” Thomas-Greenfield said.

—with additional reporting by Todd Vician