A year after the disastrous U.S. pullout, Afghan allies are still in danger—and clinging to U.S. promises to help

Afghan names and locations in this story have been changed for safety reasons.

AMAL’S BROTHER AND THREE YOUNG CHILDREN were driving down a dirt road in Afghanistan, talking and laughing together in a Toyota Hilux pickup truck, when a Taliban landmine exploded in front of them. Windows shattered, shards of glass rained down on the children, but all survived. A few years earlier, a similar landmine killed Amal’s uncle. Taliban fighters grabbed another uncle from a mosque while he was praying. They accused him of spying and shot him dead 300 feet from Amal’s house.

Amal has lost eight other relatives to Taliban attacks, including a brother killed by a car bomb last year. He himself escaped a car attack en route to Kabul, Afghanistan’s capital, by quickly accelerating as a nearby Afghan army patrol fired back at Taliban militants.

The crimes warranting these attacks? Amal and members of his family had helped Americans and U.S. troops deployed in Afghanistan.

Over the last two decades, Amal’s family and thousands like them risked their lives to join U.S. efforts to overthrow Islamist rule and rebuild Afghanistan. But a year after the United States abruptly pulled out of Afghanistan and Kabul fell, these allies continue to live in constant danger, hunted by the Taliban militants who now control the country.

Those who haven’t lost their lives have lost homes, jobs, relationships, and freedoms.

Some wait in limbo in another country. But most are stranded in Afghanistan, where they can’t work publicly and must rely on friends, extended family, or foreign donations for food and other necessities. Some, like Amal, his wife, and four children, must change locations frequently to stay one step ahead of the Taliban. Amal’s wife miscarried a son because of the constant stress. Amal burned his old uniforms and any information linking him to the U.S. military.

Amal, who gathered intelligence for Americans and the Afghan army, told me his story in broken English from a safe location in Kabul. Two months ago, the Taliban arrested and tortured another of Amal’s brothers. He remains imprisoned for thwarting an attack on Americans by a corrupt Afghan government official secretly working with terrorists. Days after we first talked, Amal learned the Taliban had just ­captured a younger brother.

Many U.S. service members who worked with Afghan allies are frustrated and ashamed that so many of their ­colleagues live in constant fear for their lives.

The images from August 2021 are still vivid. American units leaving the country. Millions of dollars in military hardware abandoned to the Taliban. The fall of Kabul. Frightened Afghans mobbing airports. Anguished families, many torn apart as some members scrambled aboard evacu­ation flights while others didn’t make it.

“I can’t believe we’ve cut and run, abandoning the people who carried a heavier load than we did,” former U.S. Army Capt. Roger Hill told me. “They never got to rest, weren’t as well trained as we are, were always under Taliban threat, and still are.” As an infantry commander in Afghanistan, Hill relied on Afghan interpreters who often fought alongside him. Some, he says, saw more combat than many U.S. ­soldiers and Marines.

“It’s shameful,” Hill says, his voice breaking as he tears up. “These are our brothers, and we’ve left them behind.” 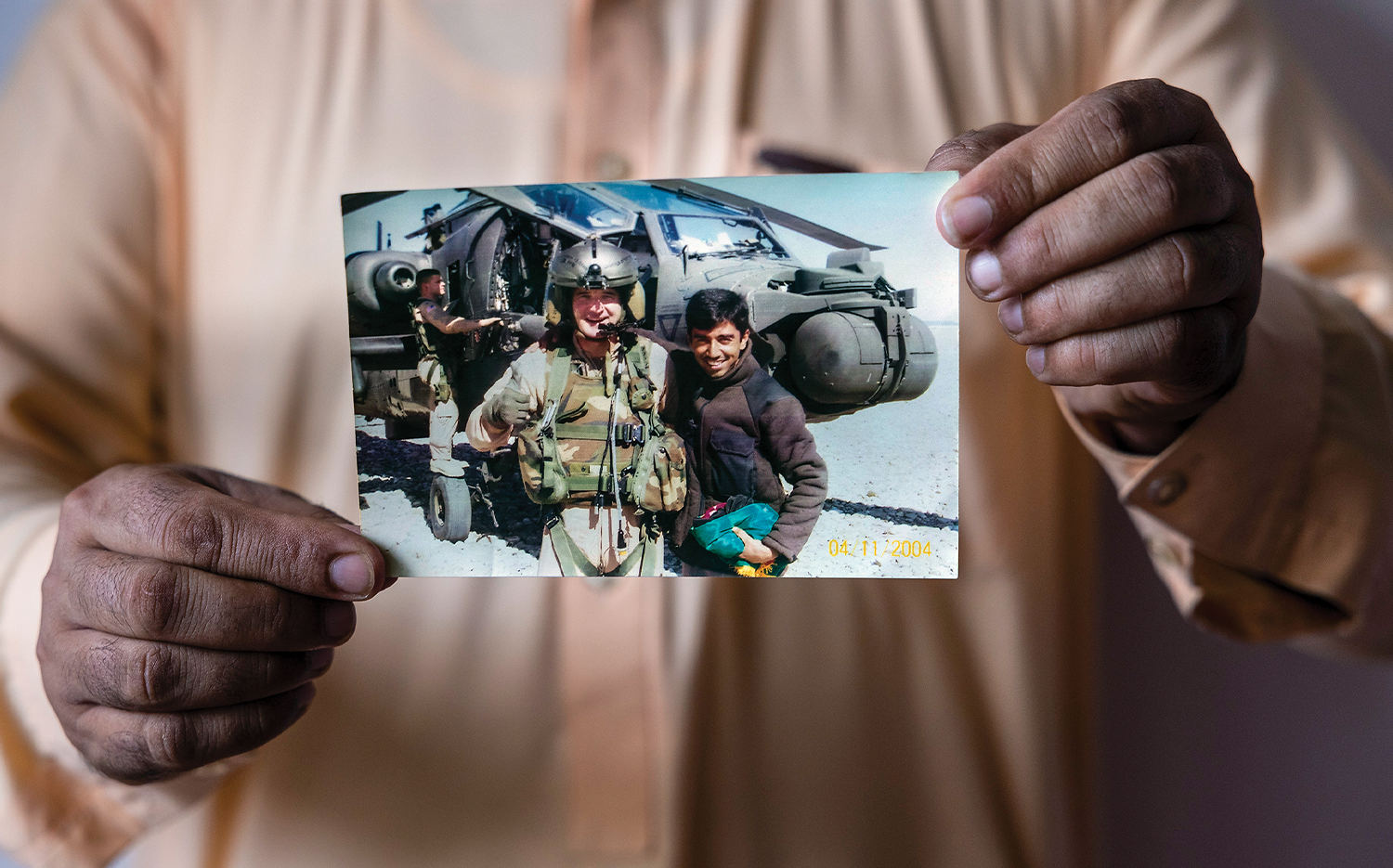 A Special Immigrant Visa applicant holds a photo of himself with a U.S. service member. Paula Bronstein/Getty Images

Today, those left behind can apply for the Special Immigration Visa (SIV) program originally created to aid Iraqi translators who worked with U.S. troops, but the process is a slow government grind. The SIV program grants legal permanent residency for those employed by, or on behalf of, the U.S. government for more than a year. All ­eligible applicants went through rigorous vetting even before they began working for American forces and contractors.

According to the U.S. Department of Homeland Security, U.S. forces evacuated about 80,000 Afghans when Kabul fell, most under the SIV program. Others left through humanitar­ian parole, a program providing temporary U.S. residency, and about 4,000 qualified through other visa programs.

But more than 160,000 SIV-eligible Afghans are still waiting for approval. The SIV system involves complicated paperwork and requests, convoluted State Department bureaucracy, and poor to nonexistent communication with applicants.

Lt. Col. Erhan Bedestani, who now works at the Pentagon, was a Special Forces operational detachment commander in Afghanistan for two rotations and later worked in the State Department. He helped his Afghan interpreter immigrate to the United States through the SIV program in 2012. Even then, Bedestani says, the slow, understaffed ­program revealed government dysfunction, with delays in processing visas, zero transparency, and no communication. Today, inundated by applications, the system hasn’t improved. “Even immigration attorneys are struggling to ­figure out the process to get Afghans here,” he said.

Bedestani and other military members say that without public outcry and media attention, the political will does not exist to fix the system. And yet, as Hill and others noted, the Biden administration has expedited visas for refugees from other perilous countries. Meanwhile, on the U.S. southern border, a steady stream of immigrants continues to enter the country illegally.

Although Hill supported the U.S. exit from Afghanistan, he called the sudden nature of it a debacle, causing near-­immediate deterioration in women’s rights and education, healthcare, infrastructure, and freedoms—and abandonment of allies to terrorists besides.

Hill said many combat veterans feel guilt over U.S. treatment of their Afghan battle brothers. He believes that’s one reason suicides have increased among combat vets: “We got to go home, sleep in comfortable beds while our Afghan brothers are being hunted down ... This is crushing many of us.”

It was compassion, driven by his faith, that motivated Hill to embrace an Afghan family of five brothers—two of whom were interpreters for U.S. forces during combat—and help get them into Pakistan.

“My gratitude for what Jesus has done for me, and the Holy Spirit in me, makes me want to repay God’s generosity,” he said. A Christian organization opened a safe house normally used for missionaries in Pakistan to shelter the Muslim brothers and their families. But they are stuck, unable to ­hasten visa approval and reliant on others for aid. 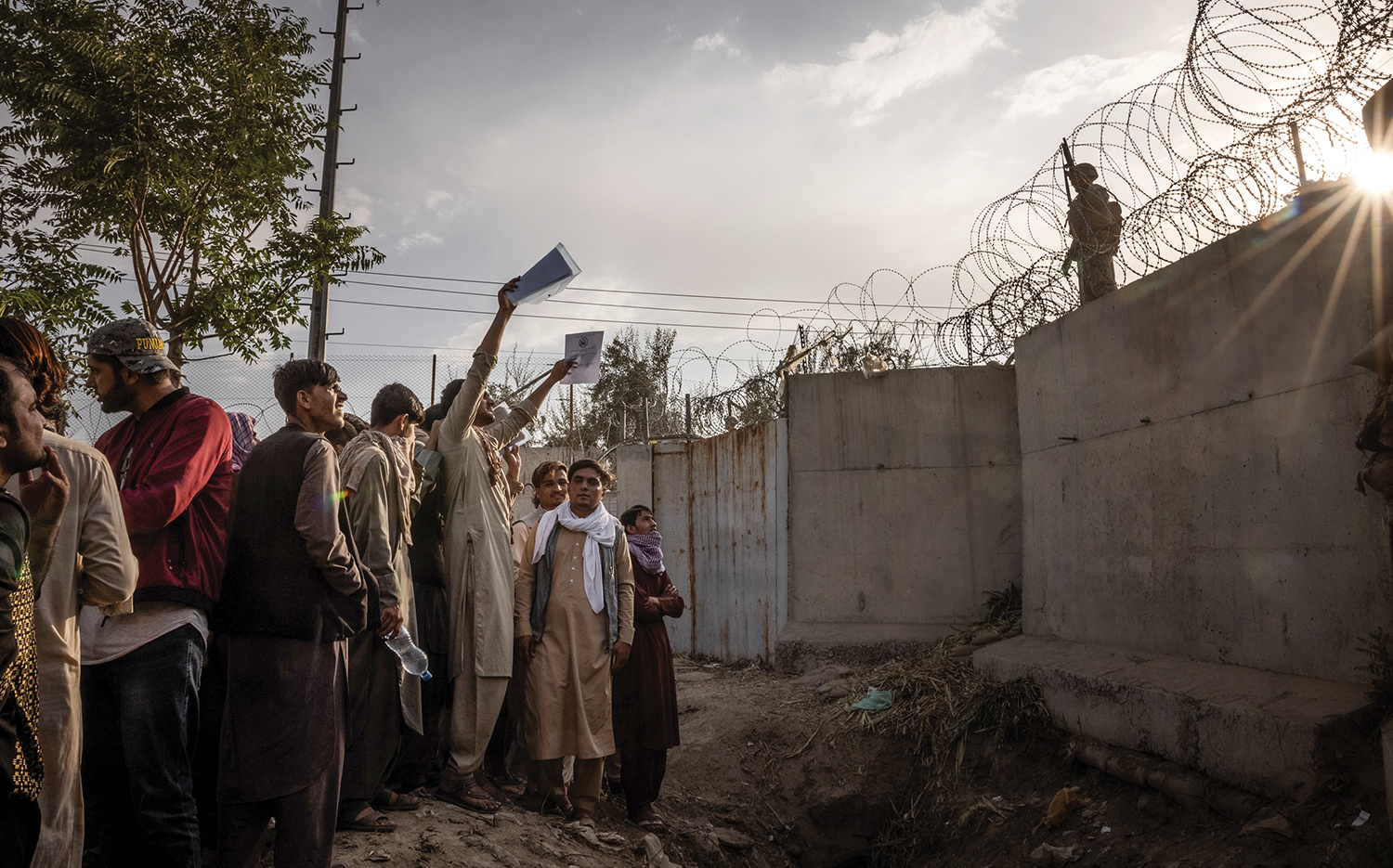 Hundreds of nonprofits and nongovernmental organizations are trying to help in similar ways, becoming human points of contact for Afghans. Terri Selph, a former Army major who served in Afghanistan, is a volunteer fundraiser with Heart of an Ace, a nonprofit providing supplies for Afghans. She’s also a handler, or shepherd, with Task Force Argo, a group of U.S. volunteers working behind the scenes to help evacuate SIV-eligible Afghans. Selph works directly and confidentially with applicants, ensuring they’ve followed State Department requirements. She also provides something that government can’t: encouragement.

One of Selph’s charges, Mohammed, told me that when Kabul fell he was in Turkey on a business visa. But his wife and children were in Afghanistan. Months later, he was able to return to see them. As he recounted his story by phone, he abruptly hung up, later explaining he’d feared someone nearby was listening. He fears for his life daily because of his previous work for U.S.-contracted companies. The Taliban also considers Mohammed an infidel because he criticized the group when he managed an Afghan television station.

He’s soon heading back to Turkey alone. It’s the only country where he holds a visa, and he hopes to get a job so he can send money home via Hawala, an off-the-grid, unregulated money transferring network.

Meanwhile, Mohammed awaits approval of his U.S. visa application, submitted a year ago.

Jeff Phaneuf, a former Marine infantry officer, now works with No One Left Behind, a nonprofit begun by an Afghan interpreter who saved the lives of five American soldiers. Active duty service members, veterans, and others work with the group to expedite immigration through the SIV program, volunteering time and money.

Phaneuf recently spoke to Secretary of State Antony Blinken via Zoom and urged him not to forget Afghans, including those stranded in Pakistan. Blinken commended NGOs and nonprofits for aiding Afghans. He said the government couldn’t do it alone. But as one NGO volunteer who heard his remarks noted, it’s the job government is ­supposed to be doing. In mid-July, the State Department announced it’s streamlining the SIV process, dropping one of the required forms. Then again, the agency promised to fast-track visas a year ago, too, but nothing changed.

Despite their plight, Afghans I spoke with praised the United States and are still glad they helped Americans fighting terrorism. “I will never forget their sacrifice and humanity for my country,” Amal said. “And I am happy and proud I worked closely with them to help keep them safe in the trenches.”

Hill said America has a duty to repay that loyalty: “We must follow through on our responsibility to get our friends out.”