Caught in the crossfire

In August, Mulat Mengesha took his two nephews and headed for the town of Nefas Mewcha in Ethiopia’s Amhara region, which borders the conflict-hit northern region of Tigray. The Tigrayan militia was pushing into Amhara as the Ethiopian National Defense Force fought back.

Mengesha, a father of three who worked with the aid group Food for the Hungry, thought the children would be safer in the larger town. Their mother allowed them to go but stayed back home.

Mengesha and his nephews died on the way, caught in the crossfire of the warring sides.

Trisha Okenge, the aid group’s country director, said team members often lose communication with each other as the region remains under a government-imposed communication blockade. The aid group learned about the deaths days later.

“His family members came and exhumed him and brought him to his church, where he was properly buried by the family,” Okenge said.

The conflict has spread since: Tigray forces announced at the end of October that they captured the strategic Amhara cities of Dessie and Kombolcha, less than 240 miles from the Ethiopian capital of Addis Ababa. That prompted Prime Minister Abiy Ahmed to declare a nationwide state of emergency, a move rights groups say has allowed for a more targeted crackdown on Tigrayans.

Countries in the region and elsewhere are watching the escalation with alarm as they scramble to find a peaceful resolution in what was once the pillar of stability in the Horn of Africa.

The Tigray War began last November as the Ethiopian federal government—with support from Eritrean forces—launched an offensive against the local Tigray Defense Forces following months of rising political tensions. Tigrayans make up only about 6 percent of Ethiopia’s population, but the well-armed Tigray People’s Liberation Front (TPLF) dominated the country’s politics for nearly three decades. The party’s relationship with Abiy’s government frayed soon after he became prime minister in 2018. The region’s leaders felt marginalized under Abiy’s reforms and refused to join his ruling coalition.

Abiy, a native of the Oromo ethnic group and winner of the 2019 Nobel Peace Prize, insisted his government has the situation under control. But his initial call for a short-lived offensive has now spiraled into a civil war. The ethnic Amhara troops have joined forces with the federal government and Eritrean forces, while the Oromo Liberation Army has sided with the TPLF. Fighting has killed thousands, displaced more than 2 million people, and left at least 400,000 people in famine-like conditions.

“The government has slowly seen its overwhelming strategic advantage eroded against a rump force more adept at insurgency combat and clearly more motivated by a fight for its literal survival,” Cameron Hudson, a fellow at the Atlantic Council, said in a statement.

The United Nations has accused both sides of crimes against humanity. Amnesty International chronicled witness accounts of Tigray forces raping dozens of women in Amhara and looting medical facilities. Ethiopian and Eritrean troops have also killed civilians and looted food and farming equipment, according to residents who fled the area.

In Tigray, the Food for the Hungry staff of more than 350 locals started to distribute food items like wheat, oil, and yellow split peas to hungry residents in March. The fighting has blocked the steady flow of aid, medicine, and other vital supplies into the region of 6 million people. The TPLF in August said as many as 150 people have died of starvation.

Since Oct. 18, no supply trucks have entered Tigray, according to the United Nations. Okenge said her team hasn’t been able to complete distributions since June because of the unrest. Aid workers have lost contact with some communities for as long as four months.

“It’s been heartbreaking to see the impact of lack of access and displacement in Amhara, this place where we have worked for over 35 years,” she said.

Since the emergency declaration on Nov. 2, authorities in Addis Ababa have asked residents to prepare for neighborhood watches and for landlords to check the identification of tenants and guests.

“There will be recruitment and organizing of the city’s youth to work in coordination with security forces to protect peace and security in their area,” said Kenea Yadeta, chief of the city’s Peace and Security Administration Bureau.

On Nov. 9, authorities in Addis Ababa detained at least 16 UN employees, who aid workers say are from the Tigray ethnic group. Ethiopian authorities have detained at least 1,000 people, the majority of them Tigrayans, according to the UN human rights office. Ten local UN employees and 34 drivers contracted to work with aid groups remain in detention. Police spokesperson Fasika Fante said authorities are only detaining people directly or indirectly supporting the Tigrayan forces: “This includes moral, financial, and propaganda support.”

On Sunday, Nov. 14, thousands of Ethiopians crowded the Meskel Square in Addis Ababa, some holding the country’s flag. Others held placards that read, “Shame on you USA” and “We don’t need interference from abroad.” 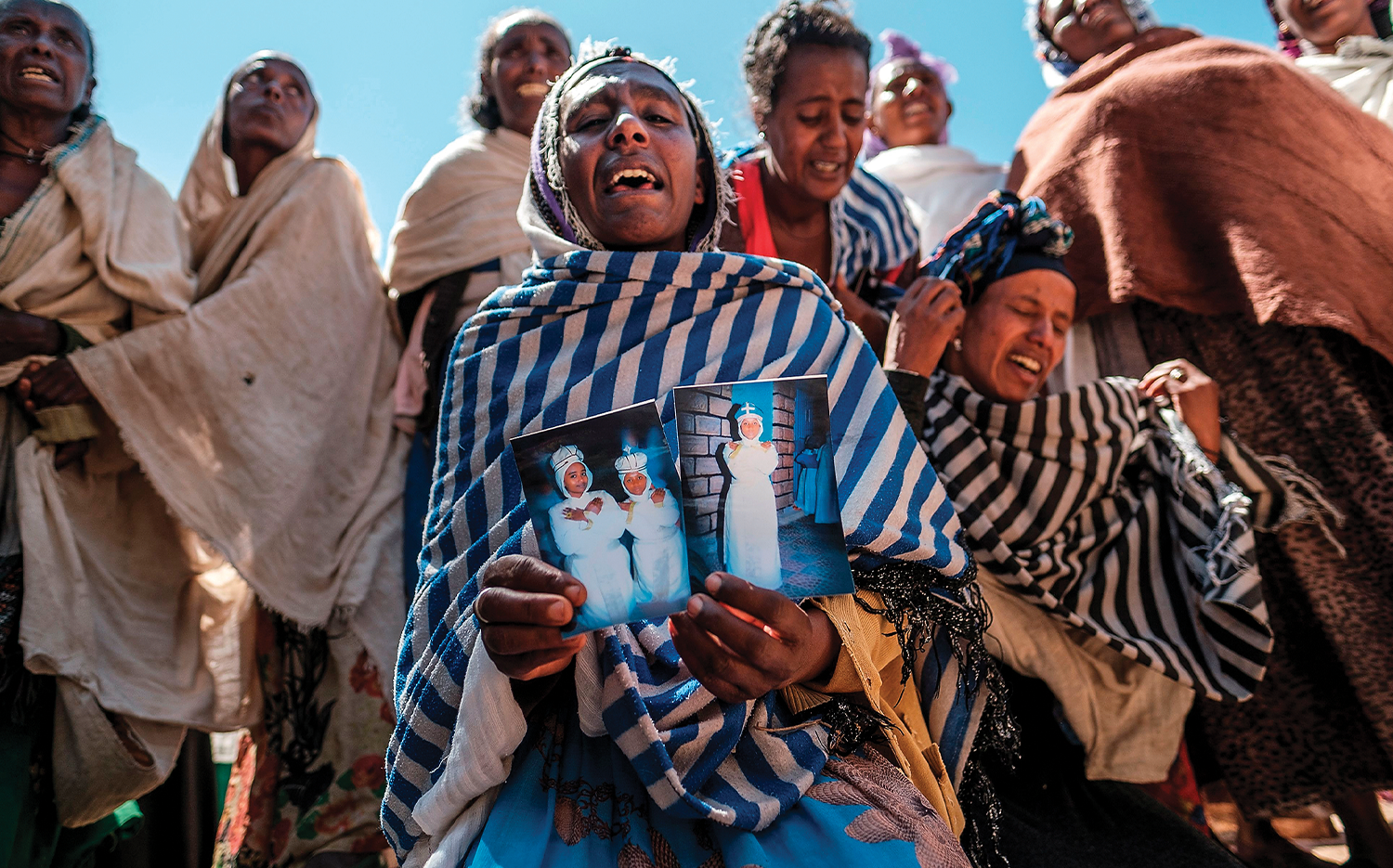 Women mourn the victims of a massacre allegedly perpetrated by Eritrean soldiers in the village of Dengolat, north of Mekele. Eduardo Soteras/AFP via Getty Images

Protesters criticized U.S. sanctions imposed after reports of human rights violations in the fighting. They also criticized calls by the United States and other international bodies for peace talks with the authoritarian TPLF.

It reflects the deepening political divide and opposition the TPLF faces as the violence persists. But Ethiopian Prime Minister Abiy is also facing pushback over his handling of the conflict. Days before the protest, nine opposition groups, including the TPLF, signed onto a new alliance in Washington against Abiy’s government. Leaders said the United Front of Ethiopian Federalist and Confederalist Forces will pose a political and military challenge to his leadership, as they hope to reverse the “harmful effects of Abiy’s autocratic rule.”

The unrest also poses regional threats. Ethiopia, the most stable country in the Horn of Africa, welcomed refugees from neighboring conflict-hit regions like Sudan and Eritrea. Now its citizens are fleeing to the same countries. Ethiopia notably helped to negotiate the 2015 and 2018 peace deals between South Sudan’s warring sides.

Olusegun Obasanjo, the African Union’s envoy for the Horn of Africa, warned that there is only a short window of opportunity left to reverse the crisis. Obasanjo, a former Nigerian president, met with U.S. envoy Jerry Feltman to discuss a cease-fire agreement and told the UN Security Council his team hopes to draft an outline on how to meet some of the initial demands of both sides, including humanitarian support and troop withdrawal.

As fears of violence loom, the United States ordered all nonessential staff to vacate the country.

But for Okenge, the Food for the Hungry director, the growing uncertainty signals a greater need to support affected civilians. The team has recruited more workers in recent months and scaled up its humanitarian response.

They are working to support people like the 25 displaced women and their children Okenge met in May in Tigray. The group huddled together on a classroom floor, with others sleeping outside.

“At the end of the day, it’s really those moms and those babies who don’t have anything to do with the conflict,” Okenge said. “They just want to live.”