In 2007, two police officers carted away Bumeryem Rozi—who was 6 1/2 months pregnant with her fifth child—from her home in China’s northwest Xinjiang region. They picked up eight other pregnant women and took all of them to a hospital.

“They first gave me a pill and said to take it,” the 55-year-old said last week. “Half an hour later, they put a needle in my belly. And sometime after that I lost my child.”

Rozi now resides in the Turkish capital city of Istanbul and is one of several Uyghurs speaking out about the Chinese government’s abuses, which include torture and forced abortions. Beijing has continued to deny the growing evidence. But activists hope that personal accounts shared at an independent tribunal that ended this week in the United Kingdom could help. A group of lawyers, academics, and business leaders organized the four-day hearing, which will pick up again in September. Human rights activists hope the outcome and public evidence will compel other nations and international groups to act.

Semsinur Gafur, a former obstetrician-gynecologist who worked at a state-run hospital in Xinjiang in the 1990s, revealed that targeted abuse of Uyghur women went on undetected for years. She and other female health workers traveled door to door with a mobile ultrasound machine to ferret out pregnant women. She said authorities razed to the ground any home with more children than the Communist Party permitted.

“This was my life there. It was very distressing,” Gafur said. “The Uyghur people saw me as a Chinese traitor.”

Uyghur population statistics point to the devastating effects of the policies described by Rozi and Gafur. The Australian Strategy Policy Institute last month found birth rates in Xinjiang dropped by 48.74 percent between 2017 and 2019. The institute said the decline concentrated in areas with mainly Uyghurs, Kazakhs, and other largely Muslim ethnic minorities.

Policy implementation documents from Xinjiang explicitly set low birth-rate targets, among the lowest in the world, according to the report. Co-author Nathan Ruser said the extreme decline is unprecedented since the United Nations began collecting global fertility data 71 years ago: “It makes you realize the scale of these family planning policies and the scale of this crackdown, the scale of societal control that authorities are looking for.”

The tribunal, which is not backed by any government, is building on mounting evidence against the Chinese government. Witnesses describe being shackled and beaten, and said family members remain missing. Researchers say Chinese authorities have kept an estimated 1 million Uyghurs and other minorities inside so-called re-education camps in Xinjiang that sometimes employ torture and forced labor.

China has repeatedly denied allegations and insisted that the camps are vocational training centers. Last week, the government-run Global Times newspaper called the tribunal a farce set up by anti-China forces. The government has also stepped up its propaganda campaign. Muslim leaders in Xinjiang last month brushed aside criticisms of China’s religious policies in the region at the end of the holy month of Ramadan. Abdureqip Tomurniyaz, president of the Xinjiang Islamic Association, echoed the government’s claims that China eradicated a breeding ground for extremism by teaching people about the law and setting up vocational centers.

The tribunal expects to release its final report at the end of the year. Geoffrey Nice, a British human rights lawyer who worked with the International Criminal Court and is chairing the tribunal, said organizers faced cyber targeting and upped security after people with fake email accounts booked about 500 of the hearings’ free tickets.

But Nice told the BBC that hearings would provide facts to encourage reluctant governments and institutions to act: “Providing a nugget if you will of undoubted truth should encourage or oblige everyone to act in accordance with their duties.” 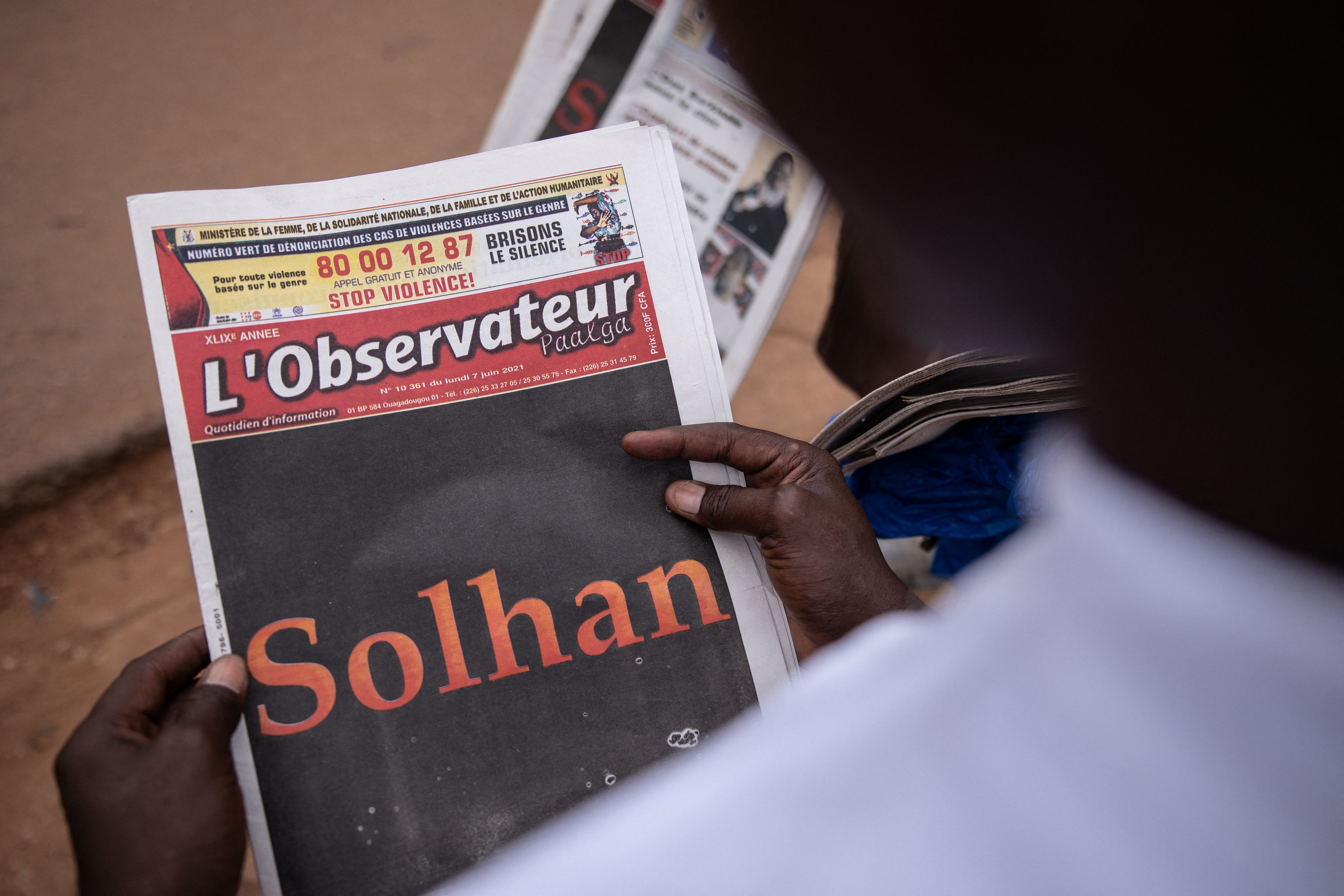 A man reads about the attack in Solhan in the L’Observateur Paalga newspaper in Ouagadougou on Monday. Getty Images/Photo by Olympia De Maismont/AFP

Burkina Faso’s government declared three days of mourning after an attack last week in a northern village left at least 132 people dead. The violence in the village of Solhan is the deadliest since the insurgency began five years ago.

Solhan borders Mali and Niger, where Islamists affiliated with al-Qaida and the Islamic State operate. No group claimed responsibility, but analysts said the mode of attack mirrored the al-Qaida-linked group JNIM.

The insurgents opened fire on civilians and burned down homes and a market. Aid workers said nearly 800 people fled to the nearby town of Sebba. Several people with gunshot wounds received care at another nearby town. Laurent Saugy, the head of the Burkina Faso delegation of the International Committee for the Red Cross, told Voice of America the agency responded to requests from overwhelmed health authorities in the town, providing dressings, medication, and syringes, among other supplies. —O.O. 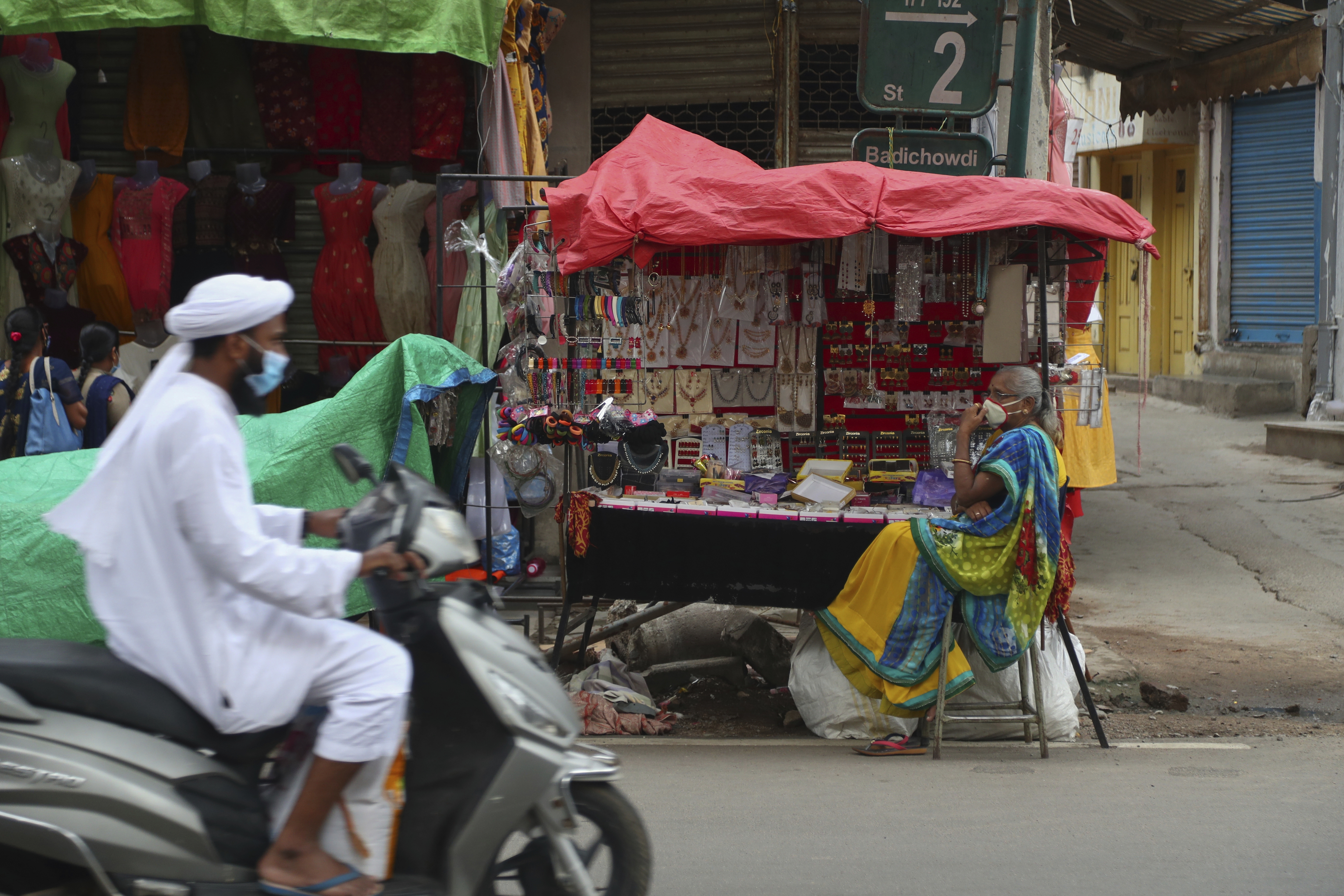 A vendor in Hyderabad, India, on Friday Associated Press/Photo by Mahesh Kumar A.

Some reprieve for India

Traffic returned to the Indian capital city of Delhi on Monday as authorities eased pandemic restrictions on businesses and public transport.

Authorities allowed markets to open partially, and shops can operate on alternating days. Other private businesses and the subway can resume normal activities at 50 percent capacity. The state that is home to Mumbai announced a five-level reopening process that would run for several weeks.

India’s deadly second COVID-19 wave beginning in April sparked a flurry of local and international support. The country has recorded more than 29.2 million infections and about 360,000 deaths since the pandemic began. This week, daily new infections fell below 100,000 for the first time in more than two months. Indian Prime Minister Narendra Modi said the federal government would take over the vaccination program from the states and provided free doses to all adults. 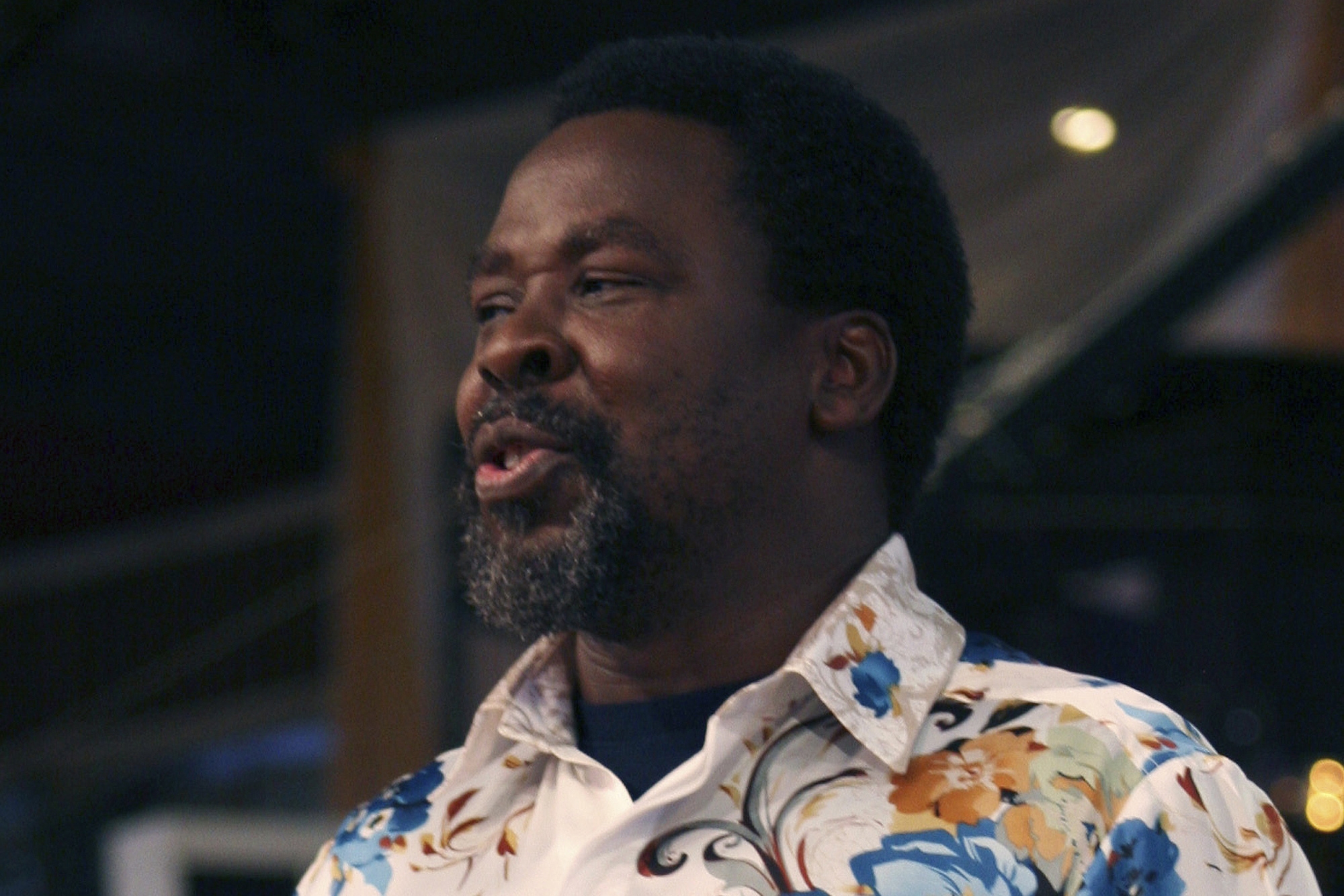 T.B. Joshua conducts a service at the Synagogue Church of All Nations in Lagos, Nigeria. Associated Press/Photo by Carley Petesch (file)

Temitope Balogun Joshua, a popular and controversial Nigerian televangelist popularly known as T.B. Joshua, died Saturday. He was 57. His church announced his death on Sunday but did not provide any additional details. “His last moments on earth were spent in the service of God,” the church said in a Facebook post. “This is what he was born for, lived for and died for.”

Joshua founded the megachurch Synagogue Church Of All Nations, or SCOAN, which also runs the Emmanuel Television Station in Lagos. He amassed millions of followers across social media platforms. More than 15,000 people attend the church’s Sunday services, and SCOAN also staged crusades in several countries.

The pastor garnered popularity for his philanthropic acts, his prophecies, and reports of healing people from various ailments, such as AIDS. YouTube shut down his channel in April over reports of hate speech against LGBTQ people. He is survived by his wife and three children. —O.O.

The Anti-Corruption Commission in Myanmar, also known as Burma, announced new charges against deposed leader Aung San Suu Kyi on Thursday. The state-run media said the commission found Suu Kyi used her position to obtain rental properties at lower rates for the charitable Daw Khin Kyi Foundation, which she chaired. The report also accused her of illegally accepting $600,000 and seven gold bars from the former chief minister of the Yangon region.

The military staged a coup in February, ousting Suu Kyi and her government. The junta has leveled several charges against her since then, including spreading information that could cause unrest and illegally importing walkie-talkies. Her supporters insist the charges are politically motivated. Her first trial is set to start Monday. —O.O.