Migrant children stand in front of a razor-wire fence and Polish guards at the Belarus-Poland border near Grodno, Belarus, on Wednesday. Maxim Guchek/BelTA via AP

Since August, Polish resident Mirosław Miniszewski, 48, has spent his free time assisting migrants near Poland’s border with Belarus. The process began after he stumbled across a group of foreigners, hungry, thirsty, and cold.

The number of migrants arriving at the shared border continued to increase, building to a standoff beginning on Nov. 8. Poland declared a state of emergency in September, blocking nonprofits that usually offer support from the border zone. That has made the charitable efforts of Miniszewski and other local residents even more important.

Polish authorities said on Friday that migrants had finally cleared out of the makeshift camps where they have been living along the Belarusian border. But officials added that many migrants were continuing to attempt to cross the border illegally. At least 12 people have died during the crisis, and the danger grows as the year wanes and temperatures dip below freezing.

While some migrants are giving up their effort and returning home, others are waiting for a political solution or trying to breach razor wire border fences on their way to Germany or other European countries. Meanwhile, the European Union has ramped up pressure on Belarus to prevent migrants from flooding Poland’s border, highlighting the tension and political division in the region.

Polish authorities have recorded more than 30,000 attempted border crossings this year, with 17,000 just in October. Most of the migrants came from Iraq, but some come from other Middle Eastern countries and elsewhere.

The European Union has accused Belarusian President Alexander Lukashenko of intentionally orchestrating the migration crisis at its shared borders with Poland, Latvia, and Lithuania. The mass arrivals began after the EU imposed sanctions on Belarusian authorities and senior leaders over a disputed election last August and Lukashenko’s subsequent crackdown on protesters. Poland has also blamed Russia for supporting Belarus. The EU this week announced further sanctions and measures to persuade Belarus to ease the crisis.

Iraqi travel agents have said Belarus relaxed visa regulations in August and increased available flights. Some migrants said Belarusian security forces told them how to cross into EU countries and gave them wire cutters and axes. Lukashenko has denied such accusations, saying his government has deported about 5,000 illegal migrants this fall.

But as many as 2,000 migrants were trapped for days between the countries. Belarus initially stopped them from returning, and Poland refused to grant access. Aid workers say several other migrants have likely died in the dark forests along the shared border. The dead include Gaylan Delir Ismael from Iraq’s Kurdish region, whose body was returned home on Monday. (It wasn’t immediately clear how he died.)

The EU has also sanctioned airlines and travel agents accused of helping bring migrants into Belarus’ capital, Minsk. The EU’s executive arm, the European Commission, last week said it reached a deal with Turkish airlines to halt temporarily all outbound flights to Minsk. The Belarusian state-owned airline, Belavia, said it will stop allowing citizens of Iraq, Syria, and Yemen to board flights from Turkey. The United Arab Emirates also banned travelers from several Middle Eastern countries from flying to Belarus. Hundreds of Iraqi migrants took flights home on Thursday at the request of their government.

On Wednesday, migrants began packing up at makeshift camps and crowded into several waiting buses. The Belarus state news agency said about 1,000 people agreed to clear the area near Poland’s border and move to a heated warehouse less than half a mile away, where they received food, water, and medical aid. Recorded video showed some of the migrants at the warehouse chanting “Belarus! Belarus!” after spending days under tents in the cold.

But next steps remain unclear. Belarusian officials told the migrants they can wait in the warehouse “for the situation to resolve.” Many have said they don’t plan to return to their home countries. Others refused to leave the border region.

German Chancellor Angela Merkel and Lukashenko on Wednesday agreed dialogue between Belarus and the EU could help solve the crisis and push forward an agreement on humanitarian aid.

But a spokesperson for Josep Borrell, the EU foreign affairs chief, noted the deeper concern about Lukashenko’s administration: “Lukashenko has no legitimacy for the EU, he cannot be considered president since he manipulated the last presidential elections in August 2020.” 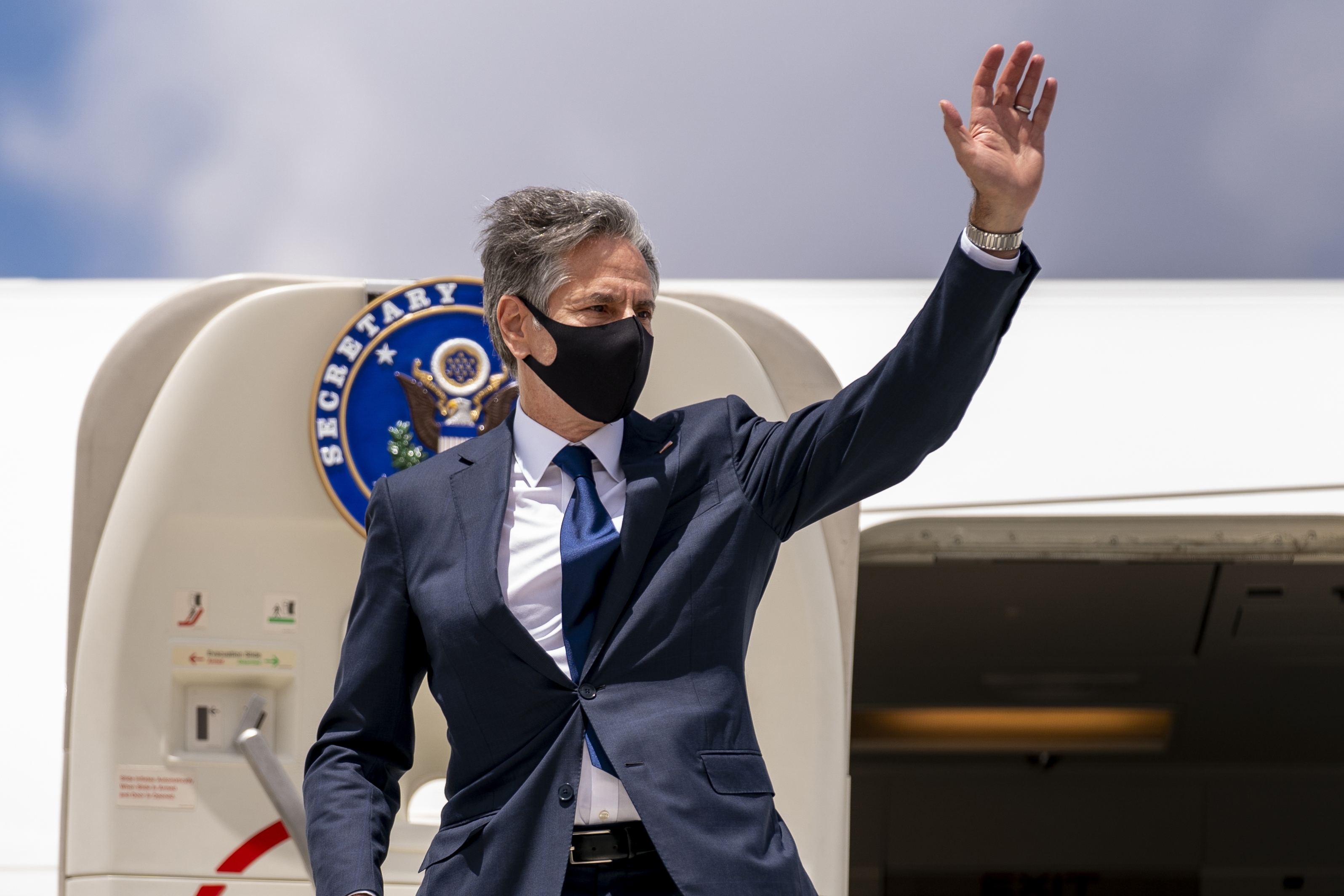 U.S. Secretary of State Antony Blinken kick-started his first official visit to Africa with a stop in Kenya on Wednesday. In a private meeting with Kenyan President Uhuru Kenyatta that ran longer than scheduled, the leaders discussed the war in Ethiopia that has killed thousands of people, displaced millions of others, and sparked fears of a potentially larger regional crisis. Blinken later told reporters the United States would determine if the killings in Ethiopia amount to genocide. “Regardless of what we call it, it needs to stop,” he said. “And there needs to be accountability, and we’re determined that there will be.”

Blinken and Kenyatta also discussed the unrest in Somalia and in Sudan, where the military staged a second coup and is cracking down on protesters. Sudanese security forces shot dead at least 14 protesters on Wednesday, bringing the death toll since the Oct. 25 takeover to 38 people. The United States has suspended $700 million in direct financial aid. Blinken said leader Gen. Abdel-Fattah Burhan can only restore international confidence by returning power to the civilian-led government.

The secretary’s five-day trip includes a stop in Nigeria, where Islamic extremists, armed herdsmen, and kidnappers terrorize different parts of the country. The U.S. Commission for International Religious Freedom (USCIRF) on Wednesday said it was “appalled” that the State Department did not redesignate Nigeria as a country of particular concern. “We urge the State Department to reconsider its designations based on facts presented in its own reporting,” said USCIRF Chair Nadine Maenza.

Blinken’s final stop will be in Senegal. —O.O.

The NBA crumpled and crashed and totally kowtowed to the Beijing big money bureaucrats. I'm glad to see that the Tennis community is not content to just let this woman be "disappeared" by the regime.