Plus persecution in China, sex abuse legislation in Indonesia, the economic downturn in Sri Lanka, and more ...

A man crosses a river at an informal settlement during flooding in Durban, South Africa, on Thursday. Associated Press/STR

Gift of the Givers in South Africa began receiving calls for help as early as 5 a.m. on Tuesday as a huge storm hit the KwaZulu-Natal province, said the nonprofit’s founder Dr. Imtiaz Sooliman.

One of the calls came from Tongaat, north of the coastal city of Durban, where floods swept away a woman and three children.

“It was just very tragic for us because we had just been there and we had just assisted those people,” Sooliman said.

The record rainfall this week in KwaZulu-Natal killed more than 300 people by Friday morning, with the death toll still climbing. Authorities and emergency responders rushed to reach stranded residents. The South Africa Weather Service said KwaZulu-Natal and other provinces should expect more rainfall over the weekend. It comes months after other countries in southern Africa recorded extreme weather, including three tropical cyclones and two tropical storms.

Sooliman said Gift of the Givers was supporting about 200 families in low-lying areas in Tongaat ahead of the rain. The group has started providing hot meals and blankets to the affected amid plans to rebuild.

The heavy rainfall damaged roads, destroyed property and infrastructure, and triggered mudslides. Mobile company Vodacom said the storm damaged more than 400 towers in the province. Floodwaters tipped over containers in the Durban port, the busiest shipping terminal in sub-Saharan Africa.

The National Sea Rescue Institute on Tuesday said it rescued thousands of people, including 1,500 who were cut off by rising waters. “It was essentially 36 hours of mass rescue operations,” said spokesman Craig Lambinon. The South African Council of Churches urged Christians to pray for the safety and comfort of the affected on Good Friday.

South African President Cyril Ramaphosa, who visited some of the affected families, said the government would declare a state of disaster in the province and organize finances to support recovery efforts. 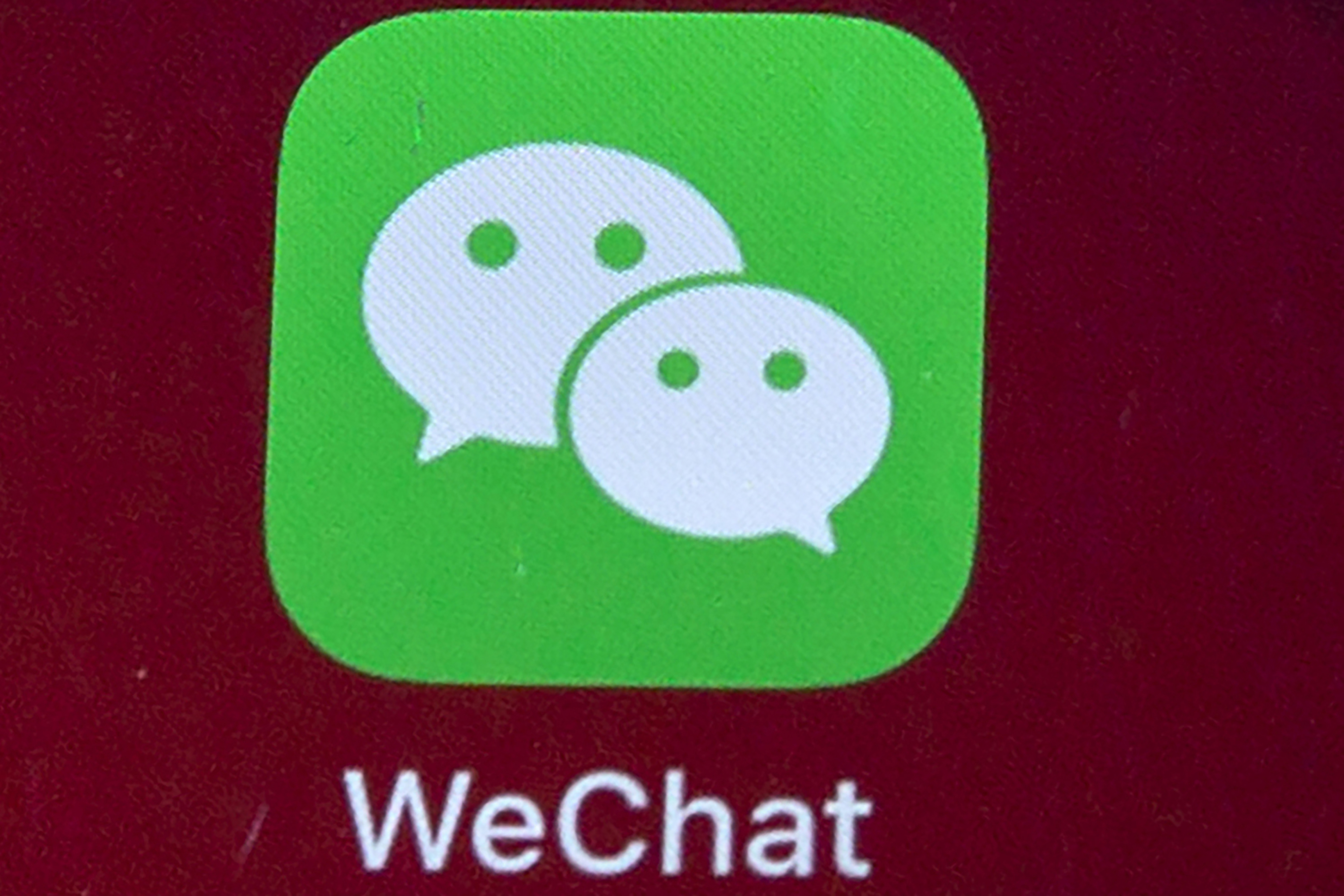 The WeChat app on a smartphone screen in Beijing Associated Press/Photo by Mark Schiefelbein, file

CHINA: An online book review group from the repeatedly targeted Early Rain Covenant Church faced new government censorship on its WeChat group. The group highlighted The Imitation of Christ by Thomas à Kempis and Exposition of the Christian Faith by Saint Ambrose. But new religious restrictions that took effect in March resulted in an official error message that read, “The word ‘Christ’ you are trying to publish violates regulations on Internet Information Services, including, but not limited to the following categories: pornography, gambling, drug abuse, incitement.”

INDONESIA: Parliament passed a landmark sexual abuse law on Tuesday. The Criminal Acts of Sexual Violence Law recognizes men and children as possible victims of sexual violence. It acknowledges nine forms of sexual violence, including forced marriage, forced contraception, and cyber sexual harassment, among others. The legislation faced years of delay in the Muslim-majority nation. The law passed one week after a high court sentenced an Islamic boarding school principal to death for assaulting 13 students over five years and impregnating some of them.

SCOTLAND: A Sudanese asylum-seeker who stabbed six people at a hotel in Glasgow in 2020 had called the Home Office and its contractors 72 times for help, according to a leaked report into his case. The Home Office report said the man had complained about his health and accommodations during the phone calls, which “should have acted as a warning.” Police responding to the incident shot and killed Badreddin Abadlla Adam during the attack at the Park Inn hotel.

EL SALVADOR: A police union said the national civilian police recorded more than 10,000 arrests after their commanders pressured them to meet daily arrest quotas. Union representative Marvin Reyes said the commanders threatened to transfer officers who didn’t follow the orders and encouraged them to give false statements against some of the detained. In the remote 1,000-person town of Cinquera, where there is no known gang presence, Reyes said police were told to make 30 arrests.

SRI LANKA: Doctors this week warned that hospitals across the country are running out of imported medical tools and essential drugs as the country’s economic crisis deepens. Sri Lanka is facing its worst economic downturn since independence, fueled by the pandemic, high inflation, and depleting foreign reserves. “If supplies are not restored within days, the casualties will be far worse than from the pandemic,” the Sri Lanka Medical Association said in a letter to Sri Lankan President Gotabaya Rajapaksa.

RWANDA: Rwanda last week launched the Center for the Fourth Industrial Revolution, the first artificial intelligence center on the African continent. Rwanda said the center, set up in partnership with the World Economic Forum, will design and pilot innovative technological systems in the health and economic sectors. 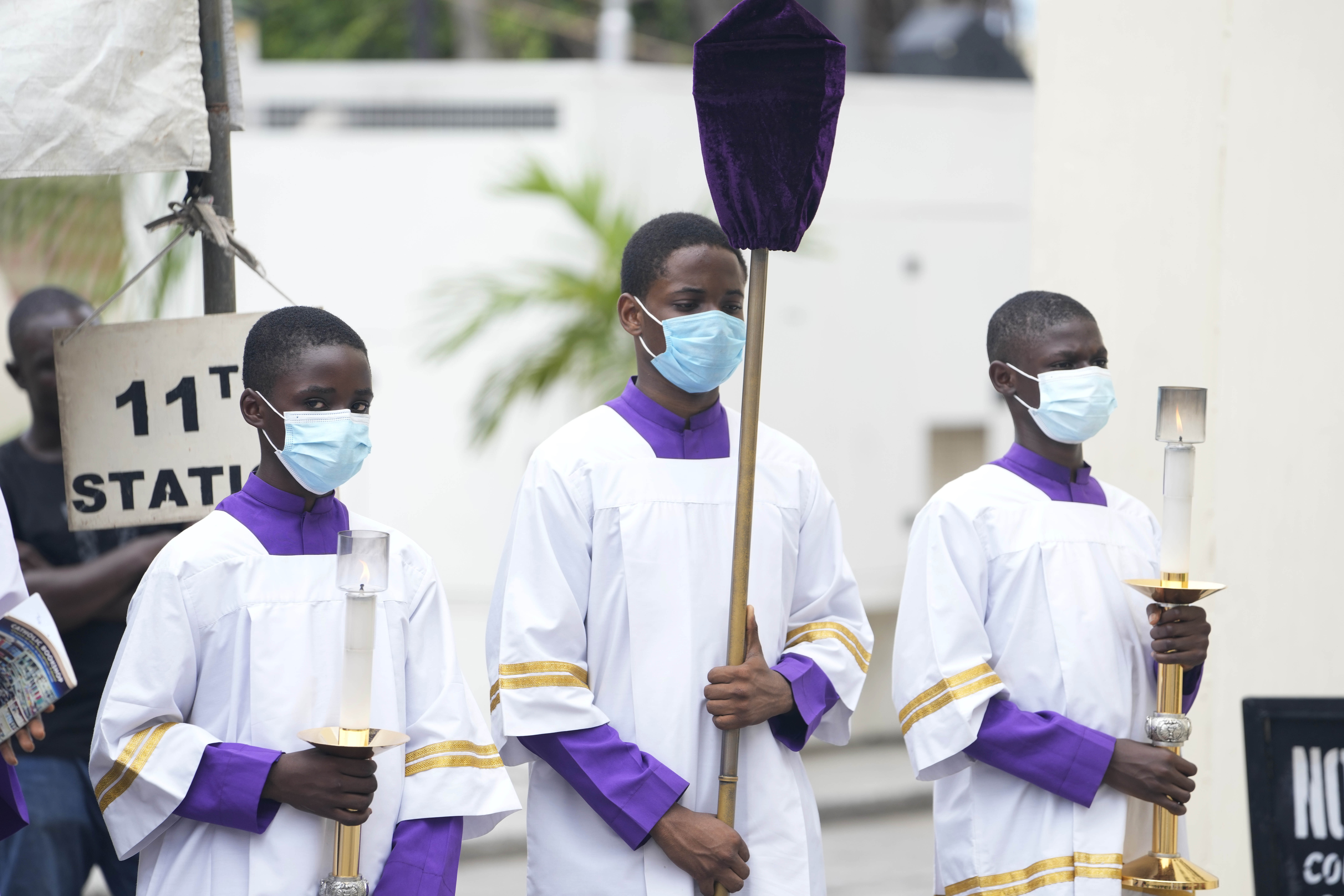 A Good Friday Stations of the Cross procession at the Church of the Assumption in Lagos, Nigeria, on Friday Associated Press/Photo by Sunday Alamba

Good Friday is a public holiday here in Nigeria. This Good Friday, I recalled past years when we attended reenactments of the Passion in the morning, sometimes taking the procession out to the streets before ending back inside the church. This year, I attended the Good Friday service at 3 p.m., and now joyfully await Easter.

The lead-up to Easter this year comes with reports of more violence in central Plateau state. Residents held mass burials this week for more than 100 people after gunmen attacked about four villages on Sunday. Thursday also marked the eighth anniversary of the Chibok school kidnapping. The real-time suffering reignites hope in the Resurrection, particularly on this week that culminates with Easter Sunday.