Praying for the persecuted church in 2021

Christians gather to intercede for afflicted believers around the world

Days earlier on Oct. 28, police in China stormed the home of a member of the beleaguered Early Rain Covenant Church (ERCC) while she taught several children. They confiscated several Christian books and detained the teacher, Su Qiong, and her husband.

Su’s case is not isolated: Last year, an average of 13 Christians were killed each day for their faith while another five were abducted, according to Open Doors’ World Watch List. On Sunday, Christians around the world will gather online for the International Day of Prayer for the Persecuted Church to intercede and call for better protection.

The World Evangelical Association for Religious Liberty launched the International Day of Prayer for the Persecuted Church in 1996. It was inspired by the 1994 “Day of Prayer for Iran” after the murder of an Assembly of God bishop and other cases of persecution. Groups like Christian Solidarity Worldwide, Open Doors, Release International, and others now partner to hold the event every first Sunday of November, and it includes a month of activities.

Danny Webster, the head of advocacy at the U.K.-based Evangelical Alliance, told me partnering groups would each make presentations on the conditions in Nigeria, Eritrea, and India before collectively praying for Christians in Afghanistan, where the Islamist Taliban has regained control of the government.

On Monday, the Voice of the Martyrs will release the short film Sabina, which tells the story of Sabina and Richard Wurmbrand, the co-founders of the nonprofit.

“There are modern-day Richard and Sabina Wurmbrands right now living out their own stories of faith, suffering, and forgiveness,” said Todd Nettleton, the group’s media chief. “As Christians, we must not allow fear to stop us from boldly proclaiming the gospel and extending Christ’s grace and love to all.”

An Islamic State–linked insurgent group in northern Mozambique has displaced more than 700,000 people, while another affiliate has claimed attacks in Uganda and the Democratic Republic of Congo.

“The body of Christ is one, and when our brothers and sisters in Christ suffer, we suffer,” Riedemann said. “Our responsibility is to pray and work as we can to alleviate this suffering.”

The fires started last Friday and burned through the night in Thantlang in the Chin state. Local resistance militia, the Chinland Defense Force–Thantlang, said the shelling started after the group tried to prevent government soldiers from looting a house. A government spokesman blamed the militia for starting the fighting and the fires.

The Chin Human Rights Organization said the blaze also destroyed an office belonging to aid group Save the Children. A Presbyterian church and another building that housed the Pentecostal Church on the Rock were also among the damaged structures, the local militia said.

The Burmese army staged a coup in February but continues to face armed resistance from several state militias, including in Thantlang. Tens of thousands of residents have fled the town, and shelling in September destroyed 18 houses and a hotel. Human rights groups and United Nations experts warned the government is planning a major offensive in the region. —O.O. 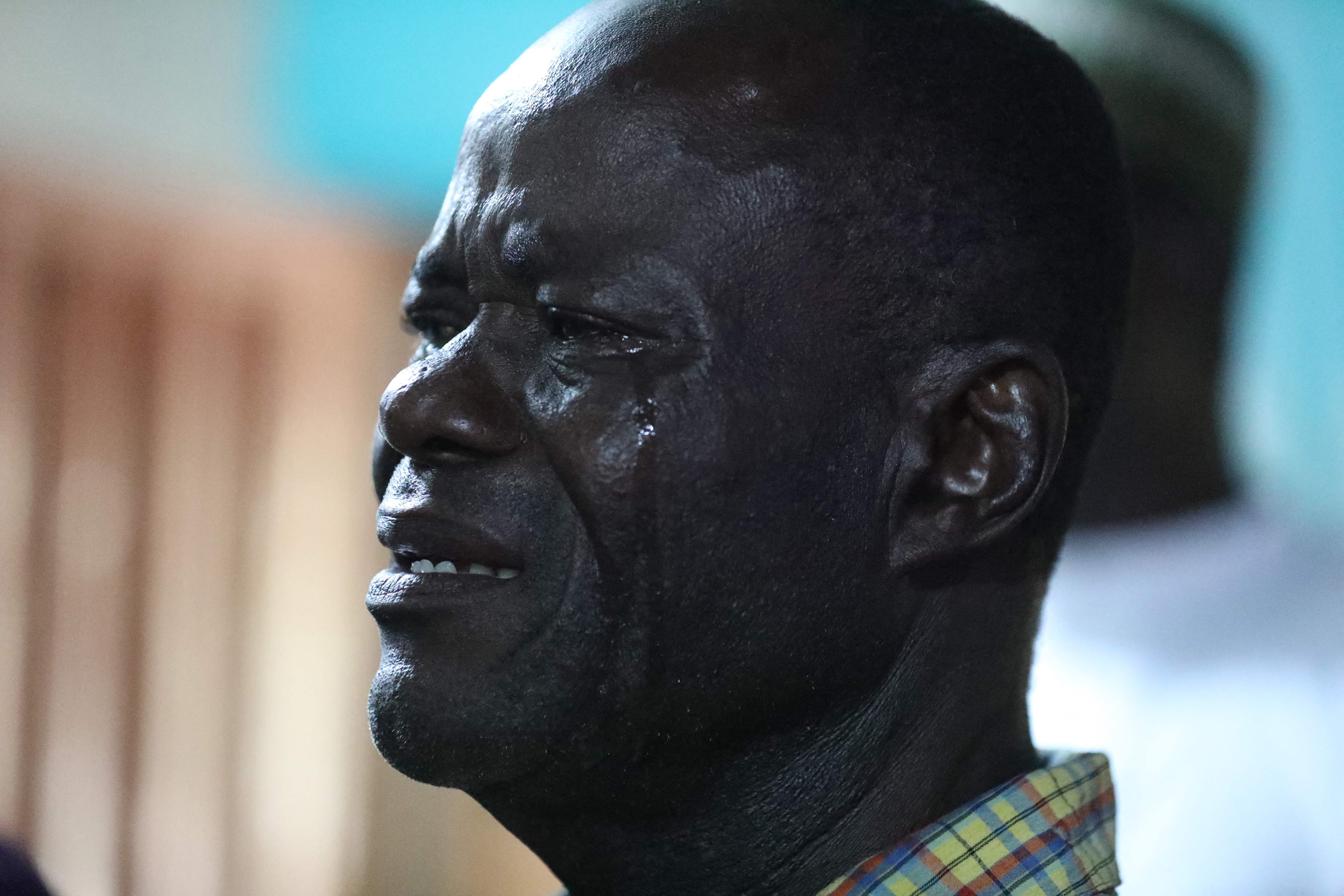 A relative of an abducted University of Abuja staff member weeps in Abuja, Nigeria, on Tuesday. Getty Images/Photo by Kola Sulaimon/AFP

Gunmen on Tuesday seized six people from the University of Abuja staff quarters. The school said the victims include four staffers and their children. University authorities on Friday said security operatives rescued all six victims without paying any ransom.

The week before, gunmen had raided a secondary school in another area of the capital city and abducted the vice principal.

The incidents mark the first abductions in Abuja amid a wave of similar attacks across Nigeria’s northwest and north-central regions. Military officials set up several checkpoints across strategic locations leading into the capital amid reports of further attacks. The stop-and-search operations caused severe traffic congestion throughout the city this week. More than 1,400 students have been kidnapped across Nigeria since March of last year. —O.O.

Sixteen Americans and one Canadian remain in captivity with their Haitian driver after their abduction on Oct. 18 in Haiti’s restive Croix-des-Bouquets area east of Port-au-Prince. The notorious 400 Mawozo gang, which staged the attack, has demanded a $1 million ransom for each of the missionaries with Christian Aid Ministries. On Wednesday, the ministry said it had received word that Christians in Oregon, Nigeria, Uganda, and Australia were praying for the missionaries over a Zoom call that meets twice daily: “Our prayer is that God would protect them and give them courage as they endure yet another day as hostages.” —O.O.

Once again, thank you for bringing us up to date.
Just noticed that you went to the same university as one of my nieces; we are not as far apart as geography would suggest as is the rule within the church.
Will ask for the Lord's grace and His wisdom be known to you as I see you reside in one of the spots you mentioned.

Believers in the one true God have been persecuted since the Garden of Eden. When Jesus came to save us all from our sin and to provide a way to commune with him in heaven, persecution continued. Now the opposition to Christianity is world wide. Believers need to continue to pray for divine assistance fervently