Isabel Vaughan-Spruce was praying silently on a public sidewalk near a Birmingham, U.K., abortion center when police arrested her for violating the city’s Public Space Protection Order. “Nobody should ever be subject to harassment,” said Vaughan-Spruce, director of U.K. March for Life. “But what I did was the furthest thing from harmful—I was exercising my freedom of thought, my freedom of religion, inside the privacy of my own mind.”

The ordinance adopted earlier last year by the city creates a “bubble zone” around the facility from which abortion protests are barred. It criminalizes those who authorities believe are “engaging in any act of approval or disapproval or attempted act of approval or disapproval” in relation to abortion, including through “verbal or written means, prayer or counseling,” according to Alliance Defending Freedom International. ADF will challenge the charges in a court hearing set for Feb. 2.

Around the globe, pro-life sidewalk counselors are fighting to break down legal walls around abortion facilities. Cities are creating bubble zones that shut out free speech for the comfort of women seeking abortions and the people who provide them.

Just before Christmas, a unanimous federal appeals court panel struck down a Louisville, Ky., ordinance that barred anyone not entering or exiting the EMW Women’s Surgical Center—the state’s sole remaining abortion facility—from coming within 10 feet of the entrance. The ordinance also applied to other medical facilities.

In a federal lawsuit filed in June 2021, Sisters for Life—joined by three individuals and another pro-life organization—claimed that banning its members from the clinic entrance was an unconstitutional violation of the rights to free speech and free exercise of religion. Like Vaughan-Spruce, members of the pro-life organization prayed, but they also distributed leaflets and attempted to engage in conversation with women entering the abortion center. They did not protest or harass the women. 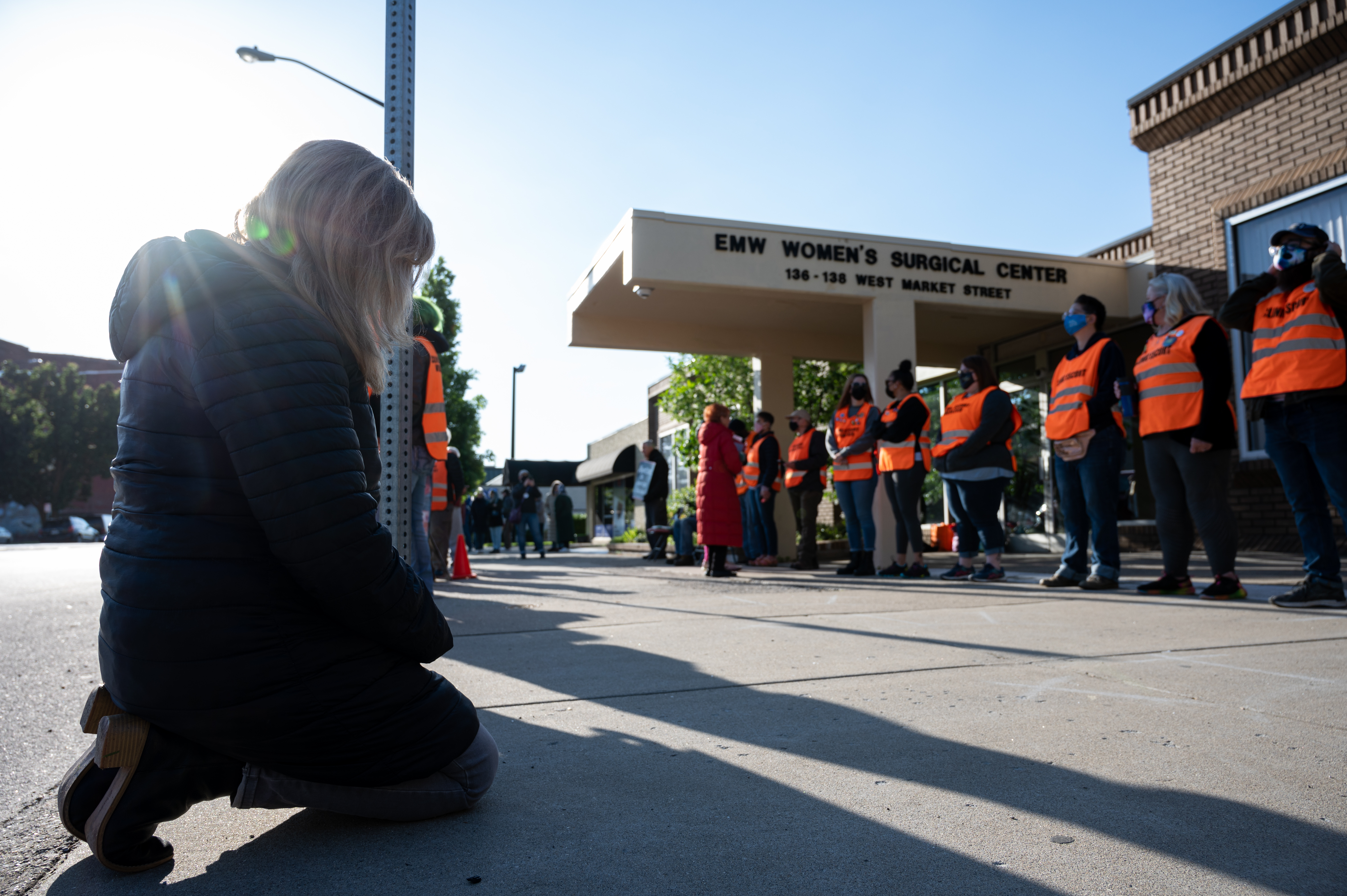 A woman praying in front of the EMW Women's Surgical Center, May 2021. Getty Images/Photo by Jon Cherry

That distinction was critical for Chief Judge Jeffrey Sutton, an appointee of President George W. Bush to the 6th U.S. Circuit Court of Appeals. In a 12-page opinion, he chastised the city for a blunt and unconstitutional approach to problems that it could have addressed in a more targeted fashion.

“The goal of the plaintiffs is not to harass or protest, whether loudly or violently,” wrote Sutton. “The point of their speech is to offer a compassionate ear. To this day, it remains unclear why the County has sought to suppress their speech, along with those types of protests that are far more likely to hinder access to a clinic and are sometimes designed to do just that.”

Sutton compared the case to another the Supreme Court heard in 2014, McCullen v. Coakley. In that case, a unanimous court set aside a Massachusetts ordinance barring all speech within 35 feet of an abortion facility. Sutton questioned an approach that banned all speech within a zone rather than one that simply targeted those who blocked the abortion center entrance or harassed those entering. “Solving policy problems by regulating speech is a means of last resort, not first resort, making ‘mere convenience’ insufficient and making us wary that ‘silencing the speech is sometimes the path of least resistance,’” he wrote.

Louisville might take a lesson from twin rulings by a sister circuit that upheld a 15-foot buffer zone in Pittsburgh and a 20-foot buffer zone in Harrisburg and yet found the ordinances did not apply to speech engaged in by sidewalk counselors. Third Circuit Judge Cheryl Ann Krause said the Pittsburgh law didn’t prohibit “peaceful one-on-one conversations on any topic or conducted for any purpose at a normal conversational volume or distance.”

Pittsburgh’s ordinance criminalizes those who “knowingly congregate, patrol, picket or demonstrate” within the buffer zone. The Louisville ordinance permitted no qualification for peaceful conversations. Unlike Krause, Sutton declined to interpret the law narrowly to save it. “If the concern is that law enforcement’s remedial hand is weak, the county holds the key,” he suggested. In short, the county could adopt a better law, one more focused on genuine harassment or physical obstruction at abortion center entrances.

Yet some free speech advocates say the cultural forces behind bubble zones are foreboding, as legal reasoning, like politics, is downstream of culture. At the heart of whether unpopular speech is protected is whether people believe it should be protected or would rather shut down that which they do not want to hear—or, in the case of Vaughan-Spruce, someone they do not want to see.

“I could leave my curtains closed, not open my front door, and not sit in my lounge—then I wouldn’t have to see them, but why should I have to do that to protect my mental health?” said one resident living near the facility where Vaughan-Spruce was arrested. “My lounge is a lovely, sunny haven–and yet for 80 days a year I can’t sit in there without feeling miserable and helpless.”

Louisville attorneys have not yet indicated whether they will ask the full court of appeals to rehear the case or appeal directly to the Supreme Court.