Parole program aims to stem the tide of illegal immigration

The stopgap measure welcomes 24,000 Venezuelans but offers no long-term solutions

Ronald Aguilera set out on a 2,700-mile journey with little knowledge of what awaited him at the other end. The trip from Venezuela to Eagle Pass, Texas, took him two months and five days. He lost 39 pounds along the way. When WORLD’s Bonnie Pritchett and I spoke with him a few weeks ago, the veins stuck out on his arms and his T-shirt sagged. He told us he left Venezuela because his government job only paid $8 a month. He wants a better future for his wife and children.

Protruding cheekbones and the lines crisscrossing his forehead made him look much older than his 41 years. It wasn’t an easy journey. The immigrants who made it through the dense jungle of the Darién Gap in Panama left blue ribbons on the trees to indicate the safest paths. Many didn’t make it. The roadsides were littered with corpses, the victims of exhaustion and starvation.

Aguilera is one of the millions of Venezuelans who have fled a repressive communist regime and imploding economy. Thousands of them have trekked through the dangerous jungle to make an asylum claim in the United States—often illegally crossing the Rio Grande between ports of entry.

The surge has overwhelmed law enforcement and border communities. In hopes of curbing illegal border crossings, President Joe Biden announced the United States will offer up to 24,000 Venezuelans a legal path to the United States via humanitarian parole. The administration modeled the plan after Uniting for Ukraine, a sponsorship program that has granted temporary residency to thousands of Ukrainians fleeing the Russian invasion. Venezuelans who do not take advantage of the offer and cross illegally will be subject to immediate deportation. Immigration reform advocates argue the program is another stopgap measure that bypasses real changes and will leave thousands of Venezuelans in peril.

On the morning of Sept. 30, Border Patrol picked up Aguilera along with several others after they climbed the banks of the swift Rio Grande that separates Eagle Pass from Piedras Negras, Mexico. Agents took him to the processing center. From there, U.S. Immigration and Customs Enforcement assigned Aguilera a court date for his asylum hearing and dropped him off at Mission: Border Hope, a respite center for immigrants. Every day, the ministry helps hundreds like Aguilera find transportation to another city.

Under the new program for Venezuelans, Aguilera would have been sent back across the border. If he wanted to qualify to enter the United States legally, he would have needed a sponsor—an individual or organization that can prove it is capable of financially supporting an immigrant for two years. Venezuelans who arrive on parole will be allowed to work. The administration hopes to discourage Venezuelans without a sponsor from taking their chances in the jungle. Those who cross illegally between ports of entry or travel through Mexico or Panama without authorization will be returned to Mexico under a law known as Title 42.

Former President Donald Trump activated the World War II–era health order in 2020. It allows authorities to immediately expel immigrants if “there is serious danger of the introduction of such disease into the United States.” Though President Joe Biden pledged to end the pandemic no-entry policy on the campaign trail, he has continued to use it to control a surge in border crossings.

Authorities can only use Title 42 if the immigrant’s country of origin or Mexico agrees to take him back. Mission: Border Hope Director Valeria Wheeler says the majority of people her organization helps are Venezuelans, Cubans, and Nicaraguans—all countries with oppressive communist regimes that don’t have a diplomatic agreement with the United States and won’t accept their citizens back.

Up until this week, Mexico would also not accept any Venezuelans turned back from the U.S. border. Venezuelans were processed under Title 8, which allows any immigrant—whether or not they arrive at a port of entry—to apply for asylum if they meet certain criteria. The applicant must “establish that race, religion, nationality, membership in a particular social group, or political opinion was or will be at least one central reason for persecuting the applicant.”

Under a new agreement, Mexico will now receive Venezuelans expelled under Title 42. “These actions make clear that there is a lawful and orderly way for Venezuelans to enter the United States, and lawful entry is the only way,” Homeland Security Secretary Alejandro Mayorkas said in a statement.

But the Biden administration is simultaneously fighting Title 42 in the courts. The U.S. Centers for Disease Control and Prevention announced it would end the policy earlier this year, but a federal judge blocked the move. The administration appealed the decision to the 5th U.S. Circuit Court of Appeals—a court known for upholding Trump-era immigration policies—and did not request an emergency stay on the order. As a result, immigration authorities have continued to use the policy to expel single adults from the Northern Triangle—Guatemala, El Salvador, and Honduras—and now, Venezuelans.

Venezuelans have made up an increasingly large percentage of record-high border crossings. President Nicolas Maduro consolidated power in response to plummeting oil prices and unrest in 2014 and simultaneously jump-started mass migration. Maduro used repressive tactics to win reelection in 2018. Nearly 7 million Venezuelans have fled the country since 2014. Colombia has accepted an estimated 1.8 million refugees.

“The humanitarian situation on the ground is deteriorating rapidly,” said Nancy Khalil, a senior program manager for World Vision. Hyperinflation and food and medicine shortages make it difficult for people to meet basic needs. A family of four needs about $450 per month to cover the cost of living. The country’s minimum wage is about $18 per month. Most families have eliminated protein from their diets. “Hygiene products are considered luxury goods,” she said. Before he left, Aguilera worked for the government. He said he earned only enough to buy two pounds of flour and two pounds of rice per month.

Danilo Zak is assistant vice president of policy and advocacy at the National Immigration Forum. “Venezuela is home to one of the largest forced migration crises in the world,” he said. “And we have over 24,000 migrants showing up at our border, fleeing that crisis every month.” Immigration authorities encountered Venezuelans 153,905 times in the fiscal year that ended this September. In August alone, U.S. authorities stopped Venezuelans 25,349 times and 33,000 in September.

Venezuelans who return to Mexico are often exploited by gangs or police. Some may still try to cross the walk or swim across the border between ports of entry. “So it seems to me that if it’s such a limited parole program, this is really for the administration about expanding Title 42 expulsions to Venezuelans,” said Zak.

Expanding processing at ports of entry is a step in the right direction, Zak said, but the program doesn’t go far enough. It medicates symptoms rather than making real reforms to the asylum system and refugee resettlement program. “Building up capacity at ports to do more asylum processing is incredibly important,” he said, as is “making better use of the refugee resettlement program.” Humanitarian parole is a temporary status. What happens when the two years are up? The Biden administration has already granted parole to thousands of Afghans and Ukrainians and some Haitians and Cubans.

The administration is once again bypassing the refugee resettlement program that grants asylum to immigrants fleeing persecution before they enter the United States. The Office of Refugee Resettlement only resettled 63 Venezuelan refugees during the last fiscal year. Complicated screening procedures, Trump’s cuts to the refugee ceiling, and Biden’s initial hesitancy to raise it decimated the system’s infrastructure. As a result, immigrants on temporary parole programs can join asylum lines that are years long or wait for Congress to grant them permanent residency through an adjustment act. 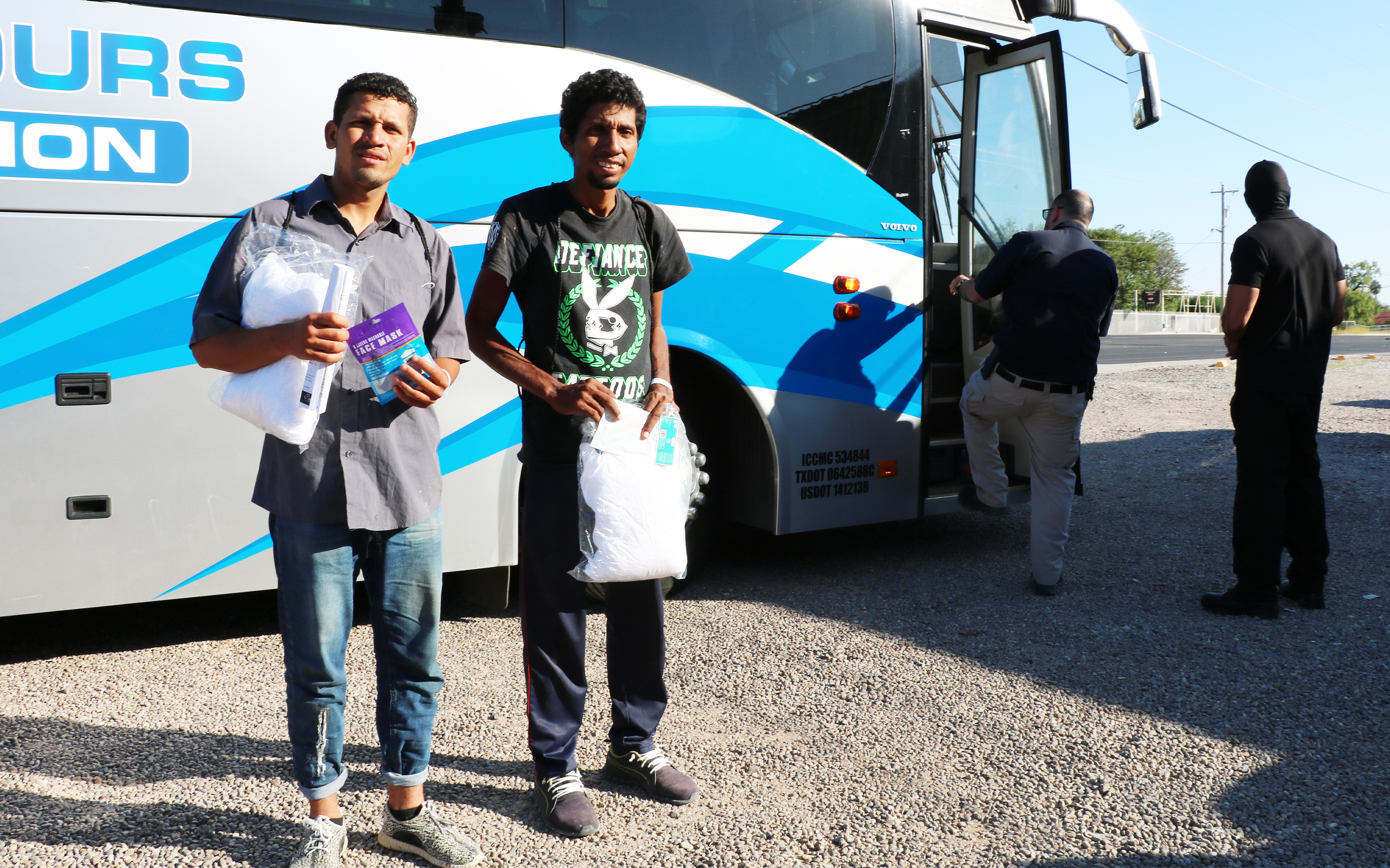 Carlos Aranjo (left) and Ronald Aguilera wait to board the Texas-sponsored bus taking them to New York. Photo by Bonnie Pritchett

Aguilera was training to be a pastor back in Venezuela. On Sept. 30, he boarded the Texas-sponsored bus that pulled up to the front of Mission: Border Hope. His next stop? New York City. Texas has bused more than 3,300 immigrants to the sanctuary city since August. As Aguilera waits for his asylum decision, he wants to continue pastoral ministry in his new city. Director Valeria Wheeler translated: “He wants you to pray for his heart. So that he keeps being warm and his ministry continues.”