Migrant children say they were abused in U.S. shelters

The Justice Department documents thousands of claims of sexual misconduct

Last week, the U.S. government released records showing thousands of reports of sexual abuse of migrant children in U.S. shelters over the last four years. While illegal immigration remains one of the hottest topics in Washington, D.C., and a key priority for President Donald Trump, the data raise real concerns about the safety of children in U.S. custody.

Jonathan H. Hayes, acting director of the Office of Refugee Resettlement, said in a statement that the “allegations were all fully investigated and remedial action was taken where appropriate.” U.S. Department of Health and Human Services spokeswoman Catherine Oakley told Axios that all shelter staff undergo background checks and all shelters must be state-licensed.

The abuse allegations varied: Some claimed shelter staff members had inappropriate relationships with minors or showed them pornographic videos. Others described physical abuse, sometimes the same staff member abusing the same child multiple times. Out of about 4,500 complaints, only 178 accused adult staff. The vast majority described one minor in the shelter abusing another.

The federal government typically contracts with privately run shelters to care for unaccompanied minor immigrants. Most of the children in custody are caught crossing the border alone and held until they can return to a parent or relative. In other cases, parents who attempt to cross illegally with children are detained and prosecuted, and the children are reclassified as unaccompanied minors and placed in a shelter.

Matthew Soerens, co-author of the book Welcoming the Stranger and Seeking Refuge, works with churches on immigration issues through World Relief, a Christian humanitarian organization. He said the influx of detainees last summer, when President Donald Trump briefly instituted a zero tolerance policy for illegal border crossings, likely led shelters to hire more staff. The background-check process, Soerens said, could have slipped through the cracks, and more children per shelter means less attention per child. He added that Congress must investigate whether the facilities did everything possible to minimize the potential for abuse.

But Soerens also pointed out that such shelters will always carry some risk of abuse. “That’s one good reason to minimize the use of those facilities, if there are alternatives,” he told me. He mentioned programs that connect migrant families with a case manager who checks in and reminds them to come to court on the appropriate date.

Dan Cadman, a fellow at the Center for Immigration Studies, noted that the majority of cases involved detainees abusing each other and recommended better risk assessment of detainees and keeping higher-risk and older children separate from younger ones. He told me the number of allegations was “disturbingly high” but observed that minors might file false claims to try to be released from the shelters early.

Soerens balanced that reality with another: Children can be less likely to report abuse due to intimidation. He suggested the numbers are probably smaller than the reality.

“The role of the government should be to prevent something like this from happening,” said Soerens, adding that the more children are held in large facilities, the more something like this can happen. But he stressed that that issue should be one of bipartisan agreement instead of approaching this report as Republicans or Democrats. “As American citizens, we should hold our government responsible to do everything possible to protect children,” Soerens said. 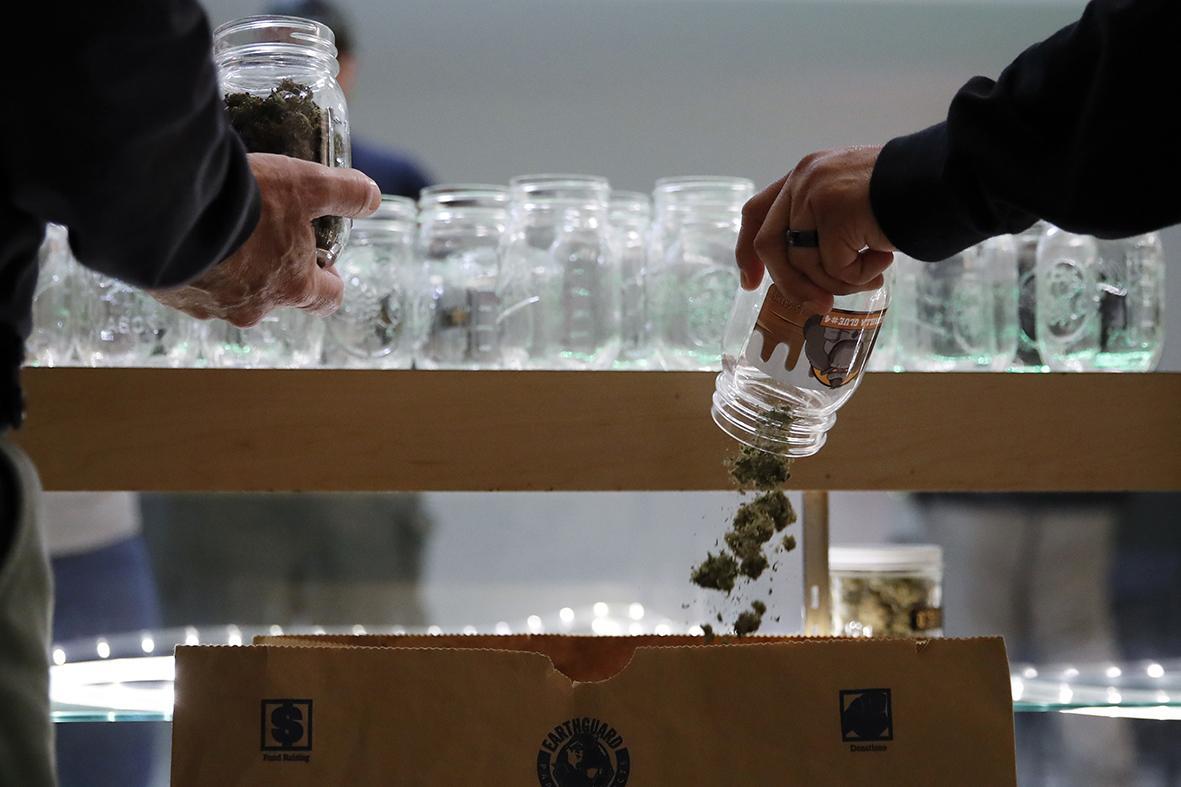 Los Angeles police during a raid at an illegal marijuana dispensary in Compton, Calif. Associated Press/Photo by Jae C. Hong

The California Cannabis Advisory Committee reported recently that weak law enforcement in the first year of legal marijuana sales allowed the black market for the drug to flourish, stifling tax revenue from sales at licensed dispensaries. Last year’s state budget anticipated $175 million in cannabis tax revenue for the 2017-2018 fiscal year and $643 million in 2018-2019. But taxes for the first half of 2018 amounted to just $135 million. Researchers at New Frontier Data estimate that 80 percent of marijuana purchased in the state over the last year came from illicit pot suppliers, the Los Angeles Times reported.

As lieutenant governor, current Gov. Gavin Newsom, a Democrat, pushed for legalizing the recreational use of marijuana in 2016. He argued marijuana laws disproportionately hurt minorities and wasted law enforcement resources. Now, as governor, he must deal with the challenge of regulating the industry and cracking down on illegal competition. In his Feb. 12 State of the State address, Newsom proposed pulling California National Guard troops from the U.S.-Mexico border and assigning them to a counterdrug task force in the state.

California was the first state to legalize medical marijuana in 1996. After rejecting a measure to allow the drug’s recreational use in 2010, voters approved a proposition in 2016 to let individuals 21 and older own and grow pot. The state began licensing commercial cannabis businesses in January 2018. —C.C. 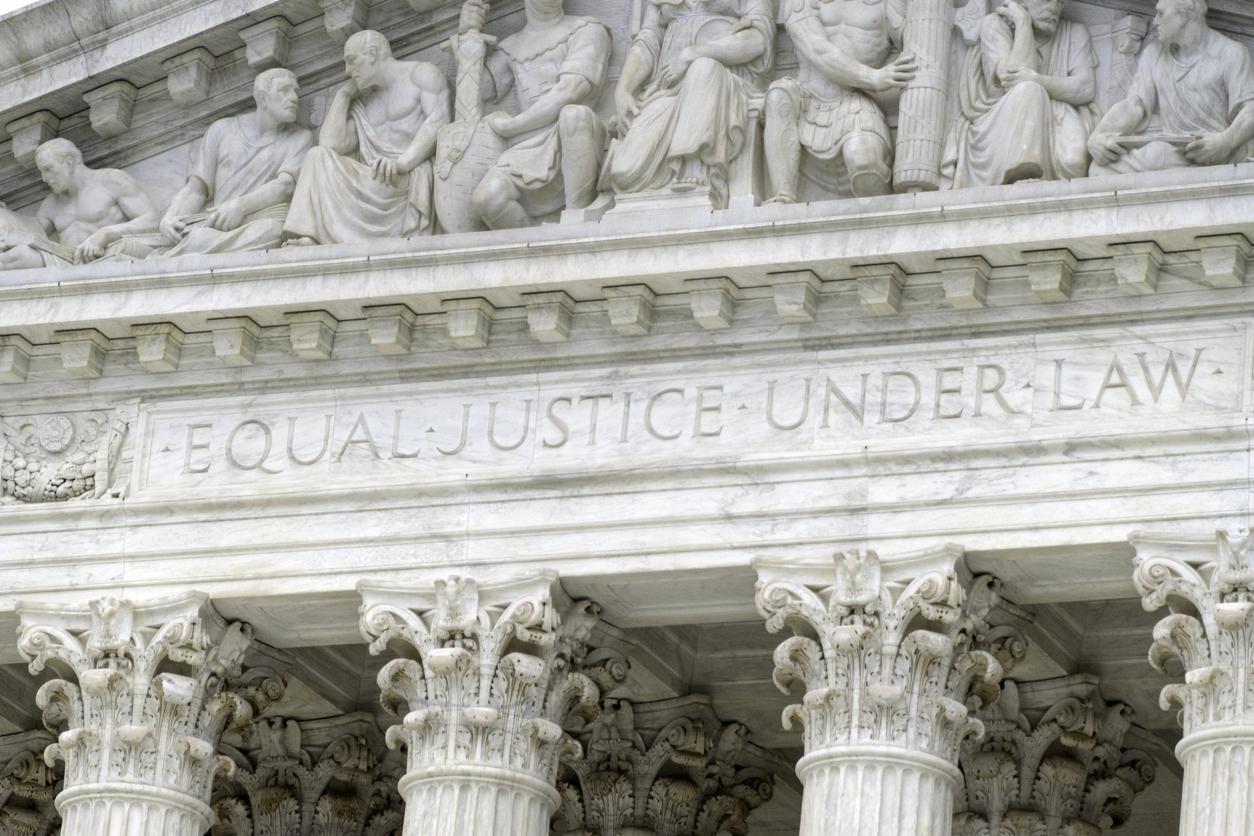 Los Angeles police during a raid at an illegal marijuana dispensary in Compton, Calif. Associated Press/Photo by Jae C. Hong

The death penalty and disability

On Feb. 19, the U.S. Supreme Court, for a second time, ruled that Texas inmate Bobby Moore is intellectually disabled and ineligible for the death penalty. The case has bounced between courts for years, highlighting confusing standards for determining mental disability in the state.

After being convicted of murder in 1980, Moore was sentenced to death under Texas law. But in 2014, a court determined his low IQ constituted a disability. The Texas Court of Criminal Appeals stepped in and ruled that Moore was not actually disabled. In 2016, the U.S. Supreme Court overturned that decision, saying Texas used outdated medical standards to determine disability. The Court of Criminal Appeals agreed to use new standards but stuck to its decision that Moore was not disabled. In a rare move, the prosecutor joined Moore in asking the Supreme Court to take a second look at the case, and the high court ruled again in favor of Moore, saying the Texas justices did not consider the potential for inaccuracy in the IQ test. —C.C.

The U.S. departments of Agriculture and Health and Human Services announced last month their partnership to create more housing options for recovering addicts in rural areas. The opioid crisis has hit rural parts of the country particularly hard, and Americans in those isolated areas often lack access to mental health services and recovery options.

The Agriculture Deparment’s Office of Rural Development plans to sell vacant and foreclosed properties at a discount to nonprofit organizations offering housing, treatment, job training, and other services for people in drug treatment and recovery. The Health and Human Services Substance Abuse and Mental Health Services Administration will coordinate the effort.

In August, the Agriculture Department formed a partnership with the first nonprofit group in this initiative, faith-based Isaiah House. Based in Willisburg, Ky., Isaiah House (named after Isaiah 58) offers outpatient and residential treatment for addicts. —C.C.

Police in Baltimore reported Sunday that a panhandler did not murder Jacquelyn Smith, as her husband tearfully told reporters and police in December. Instead, police said, her husband and stepdaughter staged the murder and blamed it on panhandlers. Kevin and Valeria Smith were arrested Sunday in Texas, as investigators worried the two were preparing to leave the country. They have waived extradition and will be returned to Baltimore to face first-degree murder charges.

Authorities have not commented on a possible motive for the killing, but Baltimore State’s Attorney Marilyn Mosby said she was disappointed that the two suspects “attempted to take advantage of negative perceptions of our city.” —C.C.