Life and death in Puerto Triunfo

Stories from a Colombian river 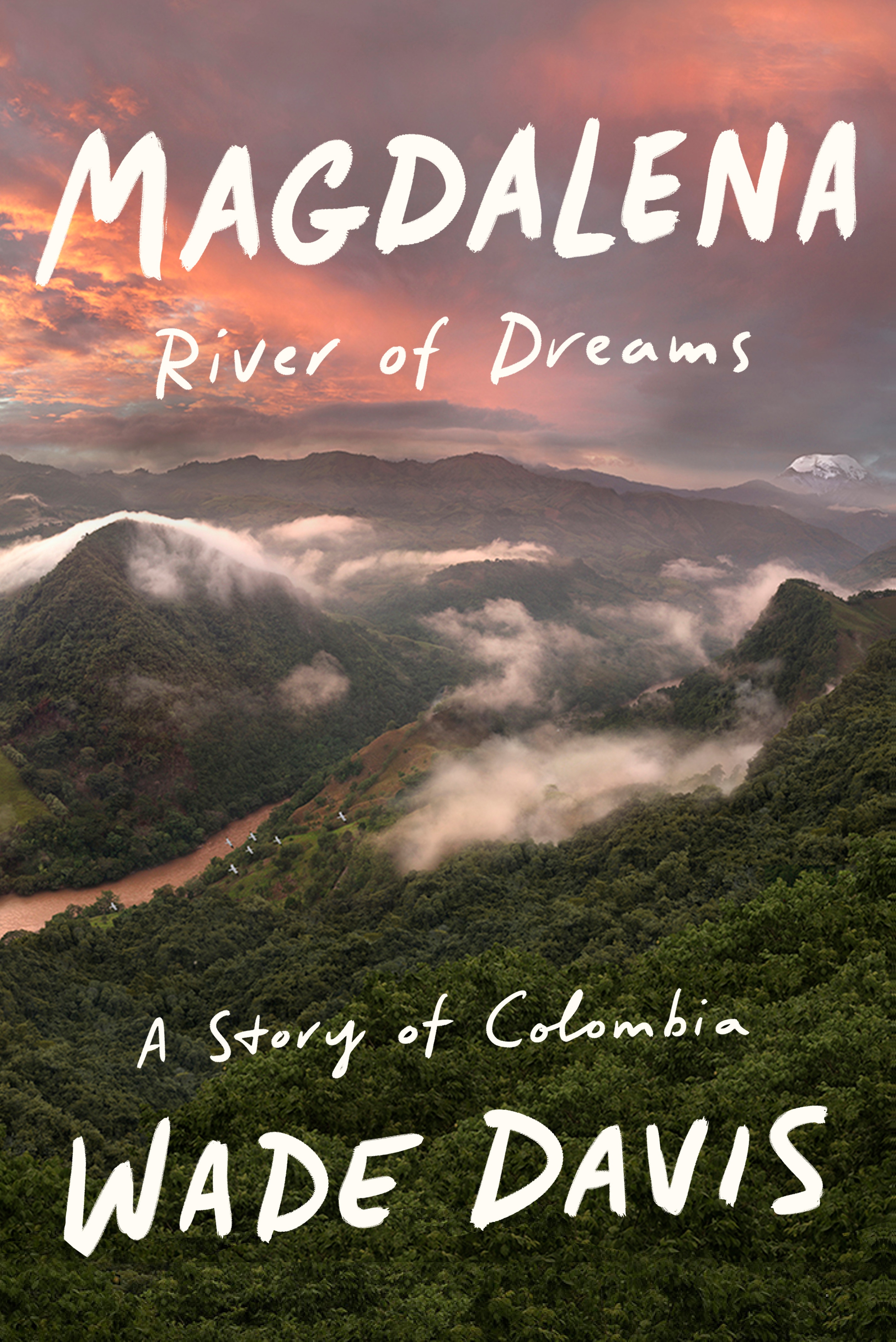 Author Wade Davis’ book about Colombia has a river at its center, not drug cartels. In Magdalena: River of Dreams: A Story of Colombia, a WORLD 2020 book of the year runner up, Davis captures life along the Rio Magdalena, a mirror to our Mississippi, flowing south to north and across the geographic and cultural strata of life in South America’s most resource-rich country. In this excerpt, courtesy of Knopf Doubleday Publishing Group, he talks to a resident of Puerto Triunfo about life under drug lords and paramilitary movements.

Puerto Triunfo is a small town built on a great bend of the Río Magdalena, on ground so low that river water regularly sweeps the plaza clean, lapping at the base of the small white church on the corner, spreading at times as far as the sports fields where today children mimic the moves of their favorite players on the A survery ground where twenty years ago the priest celebrated Mass in the sunlight as the community gathered in defiance of the paramilitaries to bury a martyr, the mother of Jenny Castañeda, the woman we had come to see.

Arriving late, well after dark, we found rooms at the Santa María, a modest hotel on the corner of the plaza directly across from the church and just inland from the waterfront. Juan went off to find Jenny, preferring to do so on his own. While we waited, Xandra and I took in the scene from the second-floor balcony of our hotel. Most of the town was asleep. A few couples huddled in doorways, speaking softly. It was close to ten, and the air was still hot. The only activity was along the river, where thatch-roofed restaurants, open to the air and brimming with people, ran half the length of the waterfront. There was an ice cream shop just below us, and a coffee bar, but the rest was under construction: a new boardwalk and promenade, and the rising outlines of yet another hotel, what would be the fifteenth in a community of just twenty thousand.

Puerto Triunfo, a town once synonymous with murder and violence, today sees tourism as the key to prosperity, banking on its proximity to one of the more popular attractions in the country, Hacienda Nápoles. Despite a hefty admission price of fifty thousand pesos, roughly fifteen dollars—not insignificant for a Colombian family—the theme park created from Pablo Escobar’s former estate and playground attracts one hundred thousand visitors each year, and the number is growing.

Not that there is a lot to see or do. People gather for snapshots beneath the main gate, still surmounted by the small Piper airplane that reputedly carried Escobar’s first shipment of cocaine to the United States. There has been a weak attempt to create a zoo from the remnants of the African wildlife he imported, though most of the animals have died, and some, like the hippos, have run wild, creating feral populations that menace local fishermen. The burnt wreckage of his antique car collection, famously torched by rivals, Los Pepes and the Cali Cartel, is on display, an odd combination of sculpture garden and junkyard. Pablo’s family home is a ruin, long ago torn apart brick by brick by looters searching for hidden caches of money. The land itself is not especially beautiful: rolling hills, brown and tired pastures, worn-out ground, eroded gullies. There is a fine exhibit tracking Escobar’s rise and fall, but it tells a story most Colombians either already know or would like to forget.

It tells a story most Colombians either already know or would like to forget.

What draws the crowds and fills the rooms of the half dozen hotels within walking distance of the entrance gate is less the place than the aura of the man himself. Some thirty years after his death, Colombians approach Pablo Escobar’s legacy with a host of conflicting emotions. There is, of course, horror, shame, anger, and hate. But there is also morbid curiosity, cloaked admiration, skepticism, and wonder, an almost pornographic attraction for a common man who rose to such heights, a simple bandido who defied the United States for over a decade, even while fighting his way to a fortune unlike anything that had been known in the annals of crime. With each passing year, as the crowds at Hacienda Nápoles attest, the greatest killer in the history of Colombia comes closer to slipping from history into the realm of myth.

Juan returned just after midnight, having made arrangements for us to interview Jenny Castañeda in the morning. He seemed visibly shaken. Apparently Jenny had told him of her latest encounter with one of the godfathers of the paramilitaries, Ramón Isaza Arango. Old and close to death, Isaza had welcomed her in his prison cell, fully aware that Jenny knew, as all had long suspected, that he had been responsible for the murder of her mother. Her mother’s name, Damaris Mejía, had been number 576 on a list of victims submitted by Isaza under the Ley de Justicia y Paz, the agreement worked out by Álvaro Uribe that pardoned paramilitary troops, allowing them to secure reduced prison time, provided they confessed their crimes.

“There were six hundred names on that document.” Juan said. “And it was just one of several such lists of his victims. Isaza was given the maximum sentence. Eight years. If he lives, he’ll be out any day, just like the rest of them.”

Tears streaked Juan’s face. It was late, and there was nothing to say.

The next morning, we met Jenny for coffee on the waterfront, taking a table in the open sun, well away from the visitors and locals finishing up the last of their breakfasts. Jenny was cautious but confident. It wasn’t the first time she had told her story, and she had nothing more to fear. Besides, as she noted with a grin, she had cancer, and though it was in remission, she might not be long for this world. That God would afflict a young mother of just thirty-five with such an illness after all she had gone through was hardly just, she agreed, but it had, if anything, made her stronger.

Jenny Castañeda had lived in Puerto Triunfo all her life. Born in 1981, she had first known Pablo Escobar through the eyes of a little girl. Her fondest childhood memories were of Christmas, when Santa Claus arrived in Puerto Triunfo, not in a sled but in an enormous truck stacked high with presents. Dressed in their finest clothes, hundreds of children would patiently line up, aligned according to age in long queues that snaked around the plaza. Mothers carried infants. Toddlers teetered, hands clinging to the legs of older siblings. The oldest were twelve, the last year of childhood. Each knew the drill and happily played to the cameras recording the event. To ensure that no one snuck back into line to score a second gift, the children had their hands stamped with an indelible mark that, as Jenny recalled, nothing could erase.

“They were the most amazing presents, always perfect for every age, toys and games no one could afford, things no one in town even knew about. It was like magic. No one ever saw Pablo, just as no one ever sees Santa Claus, but we all knew it was him.”

Paramilitary rules were simple: You behaved, or you died.

Jenny received a gift from Pablo Escobar every Christmas until she turned twelve, the year he was killed. By then, the paramilitary movement, which began in Puerto Boyacá, had crossed the Magdalena and taken firm control of Puerto Triunfo. The police had a token presence, but did nothing. Paramilitary rules were simple: You behaved, or you died. Anyone caught stealing, selling sex, taking drugs, or violating conservative traditions as defined by moral authorities such as Ramón Isaza Arango was killed. Jenny’s entire upbringing, through all her teenage years, was tainted by massacres, kidnappings, and murder. Friends and neighbors would disappear in the blink of an eye, slipping away, as her grandmother always said, from earth to heaven, without anyone in the community saying a thing.

There was a truck, Jenny recalled, that everyone knew. It would roll into town and stop in front of a shop, a private home, even the church. If it was not dropping off a body, it was carrying off a victim. Those kidnapped seldom returned. Most were taken by powerboat to an island in the Magdalena, where they were tortured and killed, their bodies dismembered and tossed into the river. As a young girl, Jenny knew what was going on. So did her grandfather, as did the entire town. But no one ever spoke about it. They just adapted, as if the truck in question were making ordinary deliveries, as if murder were merely another business. To this day, she can vividly recall her grandfather’s words, repeated verbatim every time the truck drove past their house on the plaza: “Let’s get in the house. Here we have not seen anything.”

But of course they had. Jenny was thirteen when she saw masked men drag a court official, a prosecutor, from his home. He resisted, and they knocked him senseless. He came to and screamed for help. No one did a thing. Dozens knew him well, and just stood nearby. The man ran. The local priest flung Jenny to the ground and covered her body as the murderers opened fire. The victim stumbled into the local bakery before falling over dead. The killers fled, leaving the body to be buried by the family, a small mercy.  When Jenny told her grandfather what had happened, he quoted what had effectively become the town’s unofficial motto: “The less you ask, the more you live.”

From Magdalena: River of Dreams: A Story of Columbia by Wade Davis. Copyright © 2020. Published by Knopf Doubleday Publishing Group. All rights reserved. Used with permission.

Wade Davis is the author of twenty books. Explorer-in-Residence at the National Geographic Society from 1999 to 2013, he is currently Professor of Anthropology at the University of British Columbia. In 2016, he was made a Member of the Order of Canada. In 2018 he became an Honorary Citizen of Colombia.