Understanding the World Book of the Year

Jessica Goudeau in her debut book, After the Last Border: Two Families and the Story of Refuge in America, has done what few journalists and fewer policymakers have been able to accomplish: bring the extraordinary tales of two war survivors—one from Southeast Asia and one from Syria—into the everyday normality of life in the United States.

Mu Naw, a Karen refugee from Burma (also known as Myanmar), has been running practically her whole life. After growing up in Southeast Asia’s refugee camps, she arrives in Austin, Texas, with her husband and two young children in 2007. But resettlement is not the end of her odyssey—it’s the beginning of another equally arduous one.

Hasna al-Salam is a Syrian mother and grandmother when we meet her in 2011, living in a house constantly filled with extended family and neighbors. Her hometown, Daraa, becomes one of the first flash points in the Syrian War that will splinter her community, sending Hasna to Jordan and then to the United States in 2016, where she too arrives in Austin.

Goudeau, a graduate of Abilene Christian University with a doctorate from the University of Texas, meets both women in the course of more than a decade of volunteer work in Austin among refugees. The national journalist applies a reporter’s skill with the passion of a caregiver to reconstruct each mother’s story, bringing together the trauma of displacement most Americans can’t imagine with the familiar life in America that’s strange to its newcomers. Mu Naw’s efforts to navigate American grocery shopping are unforgettably mortifying.

Spliced between their stories are chapters on the history and politics of U.S. refugee resettlement since 1945. It’s a fascinating replay with present-day consequences. Republican administrations historically resettled more refugees than Democratic ones, while the Trump administration virtually ended the program.

Overall, we see how a bygone bipartisan consensus grew around protecting those who flee authoritarian regimes and meet qualifications as asylum-seekers. That changed after 9/11, and particularly under Donald Trump, as “anti-refugee rhetoric became more and more mainstream,” writes Goudeau. His administration slashed refugee admissions, in the process dismantling a system involving churches and nonprofit groups that once welcomed new arrivals. Those changes directly reordered life in Austin for Hasna, who never imagined it apart from her family, kept apart first by war then by politics.

Goudeau approaches these contentious issues as a gifted storyteller and diligent reporter, carefully building a historical backdrop while also following the stories of Mu Naw and Hasna where they lead, without smoothing the rough parts or making the women sentimental archetypes. After the Last Border builds to a powerful conclusion, where both women must grapple with not only their traumatic experiences but also their pride and shortcomings. It’s in their flawed state that we learn to care deeply for them, and to appreciate better what they and millions of refugees endure. 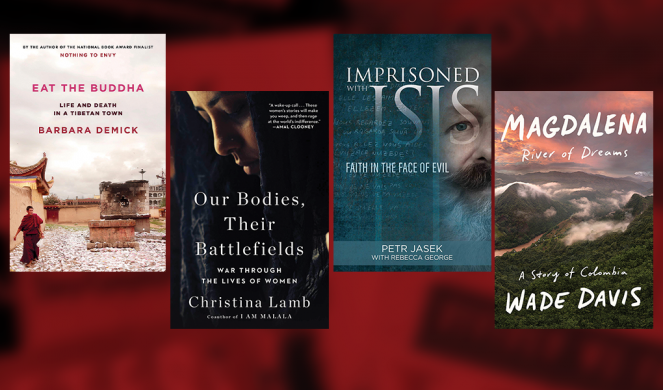 Eat the Buddha: Life and Death in a Tibetan Town

The Tibetan community of Ngaba is one of the most difficult places for outsiders to visit, yet it’s the center of Tibetan resistance to the Chinese government. Journalist Barbara Demick goes there to tell personal stories of the town’s residents (most of whom now live in exile), from their first encounter with the starving soldiers of Chairman Mao Zedong’s Red Army, who ate the religious statues made of flour and butter found in the town’s Buddhist temples. The book follows the Ngaba residents as the Communist government occupied Tibet, forced disastrous reforms, quashed a 1959 rebellion, and worked to erase Tibetan culture, language, and religion. A somber read, it shows how the Chinese Communist Party’s treatment of Tibet prefigured what is now happening to ethnic minorities in Xinjiang and Inner Mongolia. —Angela Lu Fulton

Our Bodies, Their Battlefields: War Through the Lives of Women

Rape as a weapon of war is as old as war itself. Yet it remains the “most neglected” war crime despite the modern-day rise of the Islamic State and others, writes author Christina Lamb. The veteran British war correspondent is an able chronicler of the sexual violence behind forever wars and ongoing genocides. In unflinching but sympathetic accounts that are well written and amply documented, Lamb takes readers to Congo’s hospital for rape survivors, to the forest concealing Nigeria’s disappearing Chibok girls, to the slave market at Galaxy Cinema in Iraq where ISIS fighters rate and then trade Yazidi women and girls. This is a war chronicle we haven’t had before, and one we shouldn’t look away from. —M.B.

Imprisoned With ISIS: Faith in the Face of Evil

Ending a four-day visit to Sudan in 2015, Petr Jasek was about to board a plane for his home in the Czech Republic when security officers detained him in Khartoum. As routine questioning gave way to more than a year’s detention for the Voice of the Martyrs worker—who led its efforts to monitor the persecuted church in Africa—Jasek began an unholy trial. He would be imprisoned, tormented and beaten, tried for espionage, and sentenced to life in prison. He would also be captivated by God’s presence, find remarkable opportunities for evangelism, confront authorities, and ultimately be released. His page-turning story brings fresh courage that the “realized freedom” Dietrich Bonhoeffer spoke about is one no prison walls can crush. —M.B.

Magdalena: River of Dreams: A Story of Colombia

“The people of the United States will do anything for Latin America, except read about it,” said veteran reporter James Reston. Author Wade Davis lends a reason to break that habit in a book about Colombia with a river at its center, not drug cartels. Davis captures life along the Rio Magdalena, a mirror to our Mississippi, flowing south to north and across the geographic and cultural strata of life in South America’s most resource-rich country. A National Geographic “Explorer-in-Residence,” Davis brings an unsurprisingly humanistic and uber-environmental perspective. But with armchair travel the way to go in 2020, and so few such works on Colombia, a fresh travelogue about a country coming off 50 years of conflict is a way to learn more about our South American neighbors. —M.B.

This page is part of WORLD’s 2020 Books of the Year section. Next: Accessible History.