Censorship on campus is “kinda sus”

A conservative student organization at Boston’s Emerson College found itself on the wrong side of a woke-inclined campus last week when it distributed stickers criticizing the Chinese government. 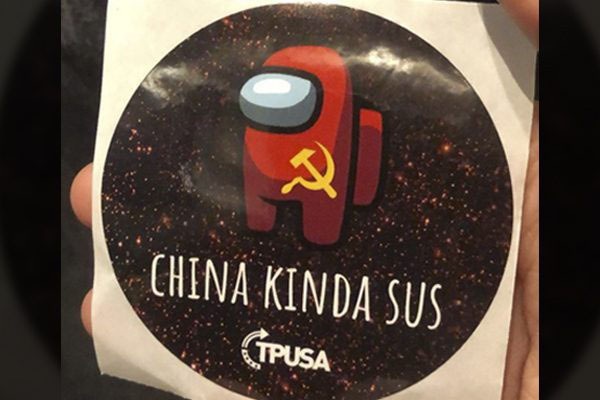 Turning Point USA (TPUSA), a conservative activist organization, began distributing the sticker on Sept. 29. Captioned with “China Kinda Sus,” slang for “suspicious,” the sticker features a red-clad character from the popular video game Among Us sporting a hammer and sickle, the symbol of the Chinese Communist Party. A day later, the university’s interim president, William Gilligan, sent an email to the student body saying the student group would be investigated for “anti-Asian bigotry.” A follow-up email delivered a second blow, suspending the organization from campus activities while under investigation.

Kjersten Lynum, vice president of the chapter, said in a TPUSA tweet that the stickers had nothing to do with Asian people but were intended “to criticize the Chinese government, the regime responsible for the largest genocide in the world right now.” Lynum, who is of Chinese and Singaporean descent, was referencing China’s torture, forced labor, and involuntary abortion and sterilization of Uyghur minorities.

Emerson’s Chinese Students Association had a less nuanced view. “Emerson is supposed to be an inclusive community, yet any hate speech is unacceptable and we experience tremendous pain from this incident,” the group said in a statement posted on Instagram, the Emerson student newspaper reported. The statement called for TPUSA to be disciplined even before any official university response.

Adam Steinbaugh, an attorney for the Foundation for Individual Rights in Education (FIRE), said that while the private college is not subject to the First Amendment, it does need to live up to its policy on freedom of expression. In a letter to President Gilligan on Oct. 5, Steinbaugh called on the university to fulfill its legal and moral obligation to protect free speech—even speech administrators or students find objectionable.

The university, though, seems to have doubled down. On Friday, FIRE issued a statement pointing to further censorship by the college, which used a Twitter feature to hide unwelcome replies to its tweets about actions it had taken against TPUSA.

“If anything is ‘kinda sus,’ it’s Emerson’s overblown response to the stickers,” Steinbaugh said.