U.S. troops lower the U.S. flag during a ceremony to hand over a U.S. base to the Afghan National Army Associated Press/Afghan Ministry of Defense Press Office

A car loaded with powerful explosives detonated on Friday evening near a guesthouse in Afghanistan’s eastern Logar province, just south of the capital city of Kabul.

The explosion went off as Muslims broke their fast during Ramadan, and at least 21 people died and more than 100 others were injured. The dead include several students who traveled for exams and were staying at the guesthouse. The force of the blast destroyed a hospital and several residential houses. No group climbed responsibility, but authorities blamed the attack on the Taliban.

In an agreement last year, President Donald Trump set a May 1 deadline for U.S. troops to withdraw from Afghanistan. On April 14, President Joe Biden approved the withdrawal to begin on May 1 and end on Sept. 11. The Taliban called Biden’s delay unacceptable, and attacks skyrocketed since the announcement. The Logar bombing occurred one day before the formal troop withdrawal began.

The ensuing violence has sparked concerns over the country’s stability after the U.S. military leaves. In the last week of April, at least 47 civilians and 76 pro-government soldiers died in attacks blamed on the Taliban.

The removal will include about 2,500 U.S. troops and about 7,000 troops from mostly NATO-allied countries. “I believed that our presence in Afghanistan should be focused on the reason we went in the first place: to ensure Afghanistan would not be used as a base from which to attack our homeland again,” Biden said. “We accomplished that objective.”

On Tuesday, Afghan security forces fought a major Taliban offensive in southern Helmand province that began a day earlier. “There was a thunderstorm of heavy weapons and blasts in the city and the sound of small arms was like someone was making popcorn,” Mulah Jan, a resident of the provincial capital Lashkar Gah, told Reuters.

Belquis Ahmadi, a senior program officer with the United States Institute of Peace, said withdrawing without a peace agreement endangers the two-decade effort to ward off a civil war and ensure economic and political progress.

“Leaders of religious and ethnic minorities have already started arming men and women to fight if the Taliban regain control of the entire country or their areas,” Ahmadi said. “This would inevitably lead to mass migrations and internal displacement.”

Biden said the United States would maintain its assistance to Afghan security forces.

Vanda Felbab-Brown, a senior fellow at Brookings Institution, called the administration’s decision a “wise strategic choice” while acknowledging Afghanistan remains at risk of a civil war or the Taliban’s return to power. She said the U.S. presence in the country would not reverse the current dynamics and called instead for other forms of engagement.

“Various al-Qaeda and ISIS affiliates robustly operate in Mali and other parts of the Sahel and North Africa,” she said. “Even though the Taliban is unwilling to sever its connections with al-Qaeda, that threat is not radically different from the terrorist threats against the United States and our allies emanating from other locales.” 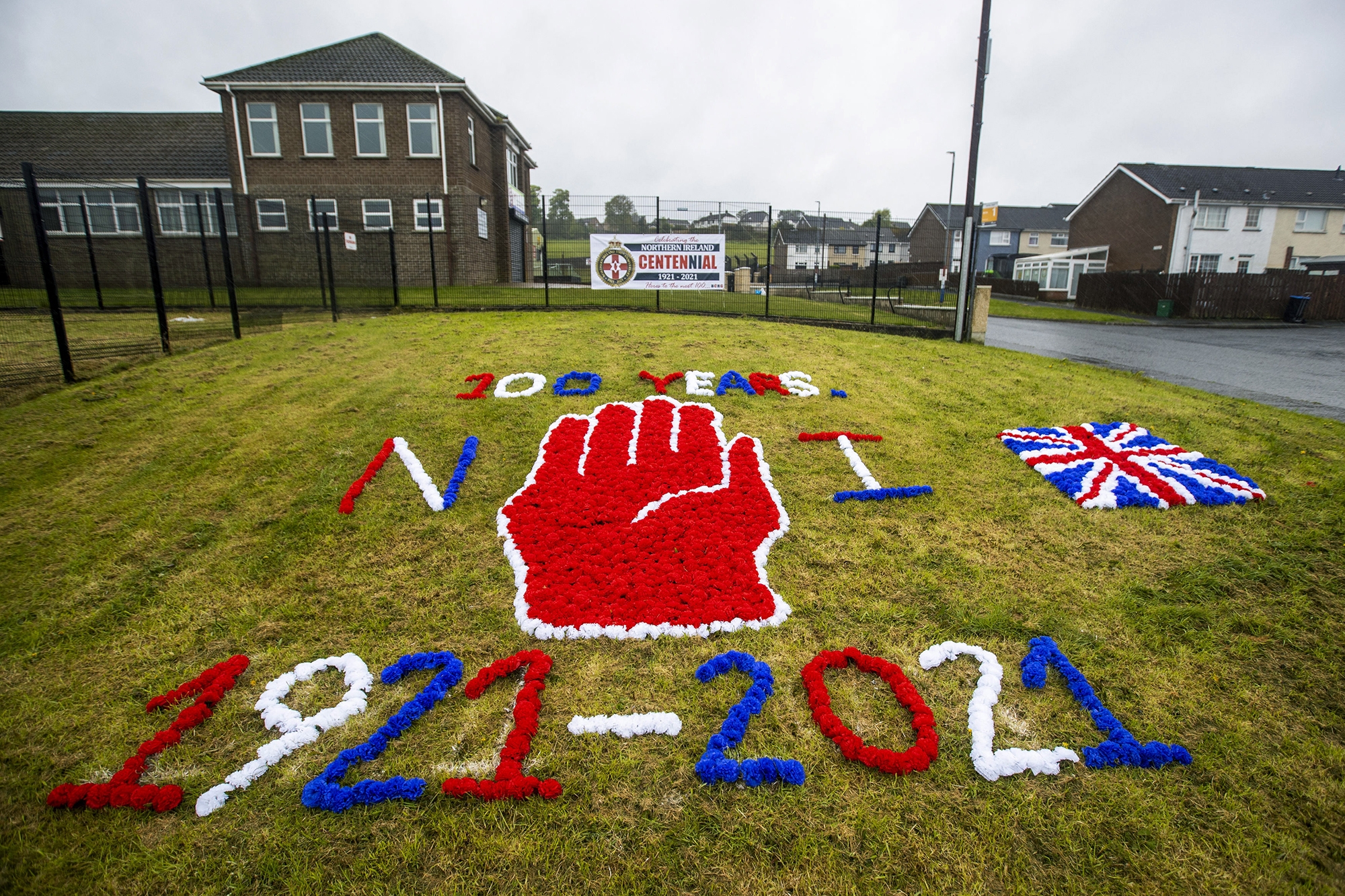 Northern Ireland marked its centenary on Monday without much fanfare because of the pandemic. Local authorities lit the Enniskillen Castle and the Strule Arts Centre purple to mark the event. Schools across the region also planted trees in honor of the anniversary.

Northern Ireland was created on May 3, 1921, with the Government of Ireland Act, which split the island nation into two. Ireland became the Irish Free State, while Northern Ireland joined the United Kingdom. But the country has faced division since then between people who want to see a united Ireland and others who want Northern Ireland to remain in the U.K. The division sparked the sectarian conflict known as the Troubles that ended in 1998 with the Good Friday Agreement. But sporadic violence has continued, including some weeks before Monday’s anniversary. Queen Elizabeth II said the centenary reminds the United Kingdom and Ireland of a shared complex history but added it provided “an opportunity to reflect on our togetherness and our diversity.” —O.O.

On May 1, China implemented new regulations passed under its State Administration for Religious Affairs in February. The rules mandate church leaders support the Communist Party and not endanger national security, among other regulations. ICC reported that bookstores run by state-sanctioned Three-Self churches now increasingly sell materials that promote the party’s ideologies: “Even their WeChat accounts are turning into propaganda channels for CCP.” —O.O.

Gunmen killed an Islamic leader who had repeatedly denounced extremism on Saturday in the Democratic Republic of Congo. Sheikh Moustapha Matsongani said the attackers entered the central mosque in Beni and shot Sheikh Ali Amin Uthman. His murder came days after attacks on villages in the eastern region killed 19 people, according to civil society groups.

Matsongani said Uthman had been receiving threats from the Allied Democratic Forces, a rebel group that began in neighboring Uganda, for more than a year.

Kidnappers in Nigeria’s northern Kaduna state released 29 students kidnapped from a forestry college nearly two months ago, state officials said Wednesday. On March 11, gunmen attacked the Federal College of Forestry Mechanization and took 39 students. They released 10 of them earlier. The freed students looked weak, and one of them was rushed to a hospital after they arrived at police headquarters in the city.

Abdullahi Usman, chairman of the parents association, confirmed the attackers received a ransom payment. Kidnapping for ransom has increased in recent months as Nigeria’s security deteriorates. Gunmen have abducted more than 700 people from schools in northwestern Nigeria since December. —O.O.

What seems so brazen is the Talib aren't even waiting until the last American boards the last outbound jet before they commence their offensive for Saigon 2.0. Lord bless and protect our ISAF troops and give them the best leadership and equipment for a successful withdrawal. May a grateful nation recognize them as heroes who did their best. And for those who don't know ISAF on a US uniform means International Security Assistance Force. On a European uniform it means I Saw Americans Fighting

I never got over to "the 'Stan" but the fact that so many Afgan officers come to the USA for ostensible training and then attempt to defect into Canada should tell us all something. I for one would be ecstatic to have all the Muslim nations led by democratically elected Eagle Scouts altar boys who eagerly hold my hand and your hand and join in as we all sing Koombaya under a UN-endorsed rainbow flag. But it ain't happening folks. A pre-modern tribalist and Islam infused culture is a poor soil for anything you or I might deem democracy. I reluctantly agree with my inner Machiavelli: cut a deal with a local strong man. Let him preside over whatever type of internal order he can maintain and enforce/impose on the tribes of opium addicts and Bacha Bazi enthusiasts. He can be President for Life and hand off power to his son or younger brother if he ever chooses to do so. But if he allows real estate under his command and control to ever become a sanctuary for the next Muhammad Atta then we give him a demonstration of above ground nuclear testing on his front porch