Solutions for pushing back against polarization

Understanding America Book of the Year

The United States is more polarized than at any time since the Civil War. The highly discussed book that best recognizes that—and proposes what to do—is David French’s Divided We Fall: America’s Secession Threat and How To Restore Our Nation. If Christian conservatives no longer fall into Trump and anti-Trump camps in 2021, it’s time to think through ways to forestall dissolution. Here are some questions and French’s answers.

You think the United States could break up? As more Americans live around like-minded citizens, religious separation coincides with geographic separation, and our culture continues to fragment, the possibility of a breakup increases. We’re not immune from tidal forces of history that have separated other unions. We can’t take for granted a continent-sized multiethnic, multifaith, extraordinarily diverse democracy staying together.

Divided We Fall presents dissolution scenarios, one led by the left and one led by the right. Both depend on the elimination or eradication of long-standing democratic norms so as to ram through legislation and government measures. Notions like ending the filibuster and court-packing are more a part of the mainstream conversation than they’ve been for years.

Do the “mystic chords of memory” that Abraham Lincoln cited still exist? The ties that bind are strong and deep, but the forces of negative polarization are growing stronger. There is so much disdain and disgust on the extreme edges of the political system: Nothing is pulling Americans together more than it’s pushing us apart.

Christians know (or should know) that all of us are made in God’s image, but do you see any positive movement among secular liberals? Look at Jonathan Haidt’s Heterodox Academy, a coalition of hundreds of mainly center-left and left academics seeking to restore small “l” liberalism on college campuses. It’s a secular revolt against increasing illiberalism and increasing intolerance in American higher education. Look at the letter valuing free speech and signed by folks as diverse as J.K. Rowling of Harry Potter fame, Noam Chomsky, and Gloria Steinem.

So we can find some allies (or co-belligerents) on the other side, and we should refrain from “nutpicking”? It doesn’t help if we take the worst voices on the other side of the spectrum, maybe unhinged or particularly angry, and elevate them as if they are typical of the other side.

What role should evangelical churches play? We need to cultivate a political theology that is not completely dependent on issues. Lots of Christians go immediately to issues, but Christians should not be like the Shale Oil and Gas Association that says we’ll back you as long as you help us keep fracking: Your temperament, personality, character, etc., don’t matter so long as you support our checklist.

What should we be teaching? What it means to be a Christian person within the body politic beyond a commitment to a certain set of issues. Our vote should not be so easily bought. If any community in the United States of America should hold politicians to a standard of character and decency, it should be the Christian community. 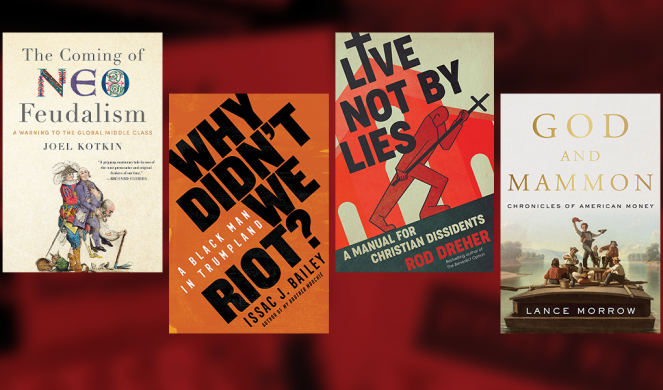 The Coming of Neo-Feudalism: A Warning to the Global Middle Class

Urbanologist Joel Kotkin writes about more than the United States, but America may be returning to medievalism faster than most. The pre-Reformation church opposed a dynamic economy and was content with poverty and social immobility. Capitalism gave multitudes the opportunity to improve their condition and build a solid middle class. Today, leading figures in media and academia ignore the need for broad-based development and are content to praise high-tech ascendancy. As in feudal days, Kotkin sees more gated cities coming, along with the prospect of authoritarian overlords facing peasant rebellions. He’s on the side of a modern yeomanry made up of small-business owners and skilled workers and opposes environmental leftists who fly their private planes to conferences that lament climate change.

Why Didn’t We Riot? A Black Man in Trumpland

It’s good to read many, but if you choose to read just one book explaining why only a small minority of blacks voted for Donald Trump, despite Democratic Party failures, this forceful one should be it. Issac J. Bailey, an eloquent journalist and Davidson College professor, views the present through the prism of a lynching past in which many Christians were complicit. Bailey tells of victims like Mary Turner, burned alive in 1918, with an unborn child cut from her stomach and stomped on by attackers, after she protested the lynching of her husband. Why Didn’t We Riot is provocative reading, and I can see why Bailey is not thrilled when he and other blacks gain praise “for swallowing our anger.”

Live Not by Lies: A Manual for Christian Dissidents

I liked Rod Dreher’s previous book, The Benedict Option, but told him that if harassment of Christians grew to the point where that option became essential, so would the unwillingness of empowered authorities to live and let live. Dreher’s new book is a manual for spiritual survival if a surveillance state imposes secularism on all. He summarizes well what we can learn from those who lived under 20th-century totalitarianism: Stand firm but let bitterness stand down. Learn from history to avoid becoming hysterical. Appreciate the value of suffering but be merciful to those whose capacity is less. Practice hospitality and do not fear being seen as weird. Speak up with the truth but don’t worry about being prudently silent at times.

Author Lance Morrow was a Luce-ist for years and at age 81 is still a lucid essayist. Morrow wrote 150+ cover stories for Henry Luce’s Time and often explained ideas by describing binaries, dueling visions. In this book he connects 2020 protests to the 115-year-old debates between Booker T. Washington and W.E.B. Du Bois. Morrow describes two schools of thoughts on how to use money to do good—philanthropy and charity, or government. He notes two schools of journalistic history-writing—Thucydides vs. Herodotus—but overlooks the Apostle Luke. Morrow even shows how “money and literary intellect would evolve into feuding parallel cultures”: Harvard professor William James sometimes played golf with John D. Rockefeller and called him “a man ten stories deep, and to me quite unfathomable.”

This page is part of WORLD’s 2020 Books of the Year section. Next: Understanding the World.