For years activists and lawmakers have called on the Trump administration to punish Beijing over its gross human rights violations, yet the government seemed slow to act. But this week the United States announced a flurry of new sanctions against Chinese officials addressing policies in several places: Tibet, Xinjiang, and Hong Kong. The week also included the United States’ strongest condemnation of China’s claims in the South China Sea.

But China returned fire with sanctions against several Republican lawmakers and the U.S. Congressional Commission on China for interfering on the Xinjiang issue while vowing to retaliate against the Hong Kong sanctions. Beijing also declared a pro-democracy primary election in Hong Kong “illegal,” claiming organizers colluded with foreign forces. U.S. Secretary of State Mike Pompeo congratulated pro-democracy groups for the successful unofficial primary, in which 600,000 people voted, and called for free and fair elections in September.

All this follows China’s aggressive actions in imposing a sweeping national security law in Hong Kong that quashes freedoms in the international financial hub.

The day after the Dalai Lama’s 85th birthday on July 6, the State Department announced it would impose visa restrictions on Chinese officials who block visitors—including journalists, U.S. government officials, independent observers, or tourists—to the Tibetan Autonomous Region. It did not include specifics or a list of officials who would be sanctioned. Chinese authorities tightened control over the Tibet Autonomous Region and transformed it into a police state after violent protests in 2008 and a string of Tibetan monk immolations.

Then last Thursday, the Treasury Department sanctioned four Chinese officials, including Xinjiang Communist Party Secretary Chen Quanguo and the Xinjiang Public Security Bureau (XPSB), under the Global Magnitsky Act for their oppression of Uighurs and other ethnic minorities. Chen first successfully suppressed Tibet before turning to Xinjiang where he set up a high-tech surveillance state and threw more than a million Uighurs into re-education camps. The other three officials are Zhu Hailun, a former deputy party secretary of Xinjiang; Wang Mingshan, the director and Communist Party secretary of the XPSB; and Huo Liujun, the former party secretary of the XPSB.

Republican Sen. Marco Rubio said in a statement the move was “long overdue.”

“For far too long, Chinese officials have not been held accountable for committing atrocities that likely constitute crimes against humanity," Rubio said.

On Monday, the Chinese government responded by leveling “corresponding sanctions” on Rubio, Sen. Ted Cruz, Rep. Chris Smith, and Ambassador at Large for International Religious Freedom Sam Brownback, all Republicans who have spoken out about China’s human rights abuses. It also will sanction the Congressional Executive Commission on China, a bipartisan government agency that monitors human rights and the rule of law in China.

“We urge the U.S. side to immediately revoke the wrong decision and stop any words and deeds that interfere in China’s internal affairs and harm China’s interests,” said Hua Chunying, the spokeswoman for China’s Ministry of Foreign Affairs. She did not detail what the sanctions entail, although the moves on both sides are largely symbolic: None of the American and Chinese officials are known to have assets in the other country.

On the same day, Pompeo also announced the United States rejected most of China’s claims in the South China Sea, calling them “completely unlawful.” China claims 90 percent of the South China Sea, through which a third of the world’s trade passes, causing disputes with its smaller Southeast Asian neighbors. The United States has decided to remain neutral on territorial claims on the Spratly Island and other land features.

The move was the strongest statement the United States has made since an international tribunal came to a similar conclusion in 2016. The U.S. announcement opens the possibility it may aid Vietnam, Malaysia, and the Philippians should China decide to act aggressively to claim those waters. 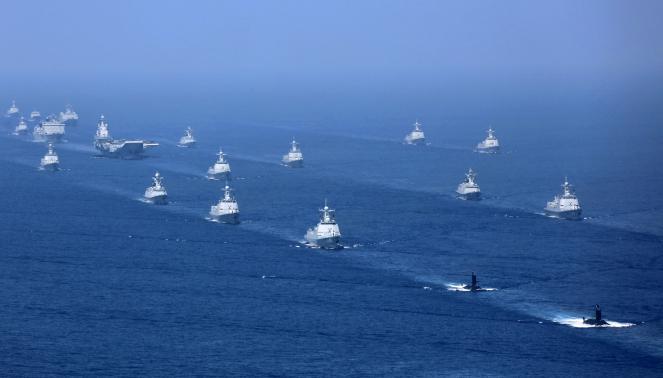 In this April 12, 2018, file photo released by China&#039;s Xinhua News Agency, the Liaoning aircraft carrier is accompanied by navy frigates and submarines conducting an exercises in the South China Sea. Li Gang/Xinhua via AP, File

On Tuesday, President Donald Trump signed a bill sanctioning officials in China and Hong Kong responsible for the Hong Kong national security law, as well as banks that conduct “significant transactions” with them. He also announced in a Rose Garden press conference—which largely strayed into a campaign rally speech against former Vice President Joe Biden—that he issued an executive order stripping Hong Kong of preferential trade treatment since it no longer maintained a high degree of autonomy.

The U.S. will also end other agreements: an extradition treaty with Hong Kong, the Fulbright student exchange program with Hong Kong and China, and joint training programs for the Hong Kong Police Force. Meanwhile the U.S. will increase the number of Hong Kong refugees it allows in. (Another bill in Congress would give Hong Kong residents refugee status if they fear punishment for protesting peacefully.) The order also blocks the U.S. assets of anyone deemed responsible for undermining Hong Kong’s freedom.

“Hong Kong will now be treated the same as mainland China—no special privileges, no special economic treatment, and no export of sensitive technologies,” Trump said. “Their freedom has been taken away; their rights have been taken away.”

China’s foreign ministry quickly responded that it would retaliate “to protect its legitimate interests and impose sanctions on relevant U.S. personnel and entitles,” but did not elaborate.

The next day, Pompeo further said the United States would impose visa restrictions on Chinese tech firms including Huawei, which he called “an arm of the Chinese Communist Party’s surveillance state that censors political dissidents and enables mass internment camps in Xinjiang and the indentured servitude of its population shipped all over China.” It was a reference to Uighurs who “graduate” from re-education camps and become forced laborers in other parts of the country.

Influenced by the U.S., British Prime Minister Boris Johnson announced his government would ban the purchase of new 5G mobile equipment from Huawei and get rid of existing Huawei parts in its 5G network by 2027.

Despite other divisions within Congress, punishing China for its actions is largely bipartisan. After Trump signed the Hong Kong Autonomy Act Tuesday, Speaker of the House Nancy Pelosi, a longtime critic of the Chinese Communist Party, called on Trump to “take strong, strategic action to hold Chinese officials accountable.”

She added: “We must consider every tool at our disposal, including visa limitations and economic penalties, to keep alive the hopes for freedom, justice and real autonomy for the people of Hong Kong.”