Police detain a protester after they pepper sprayed him Wednesday in Hong Kong. AP Photo/Vincent Yu

Hundreds of Catholics and Protestants filled Our Lady of Mount Carmel Church in Hong Kong’s Wan Chai district Wednesday for an annual prayer meeting. It was the anniversary of Hong Kong’s handover to China, which residents usually mark with large protests.

This year, attendees had another weight on their minds: the sweeping national security law that went into effect the night before. “Everyone has a sword over his or her head,” the event organizer said in his opening prayer.

One man held a wooden crucifix while a banner with the protest slogan “Liberate Hong Kong, revolution of our times” lay across his lap. Auxiliary Bishop Joseph Ha urged believers not to fear, reminding them of Jesus’ peace as He faced crucifixion. The world’s false peace maintains stability by suppressing others, Ha preached. But the peace Jesus offers is based on the love of the Father.

“We have no more freedom in Hong Kong,” said 49-year-old Dorothy Lee, who helped organize the prayer meeting. “‘One country, two systems’ has completely died.” Still, the social worker holds onto the hope Christians have while facing the grim prospects: “If we feel something is unjust, we still have the peace to come out and say no.”

Outside the sunlit sanctuary, thousands of protesters defied a police ban and streamed onto the streets to protest the new law. Shouting slogans and marching, they faced off with police who fired tear gas, pepper spray, and water cannons. Police raised a new purple banner saying anyone holding signs or chanting slogans calling for independence could be arrested under the national security law. Soon afterward they arrested a man for holding a “Hong Kong Independence” flag.

By the end of the night, police arrested more than 300 people, nine of them for violating the new national security law.

The measure is concerning not only for its broad definitions of terrorism, subversion, secession, and foreign interference—basically covering all of the actions of protesters in the past year—but also for the dismantling of the territory’s checks and balances. It creates powerful new Beijing-backed bodies to investigate, prosecute, and judge supposed lawbreakers.

Francis Yip, an associate professor at the divinity school at the Chinese University of Hong Kong, said the general feeling in Hong Kong was one of apprehension: No one knows exactly what Hong Kong will look like under the new law. Like many others, he stayed up Tuesday night reading through the law, since Beijing only released its contents at 11 p.m.—after officials had already enacted it.

“The so-called firewall between society in the mainland and Hong Kong seems to be vanishing,” he said. “There are many posts on social media stating 2047 has already come … and Hong Kong will be just like another Shenzhen or Shanghai.” Hong Kong’s 50 years of autonomy was set to expire in 2047 under the Sino-British Joint Declaration. That’s when the city is to fully integrate back with mainland China. 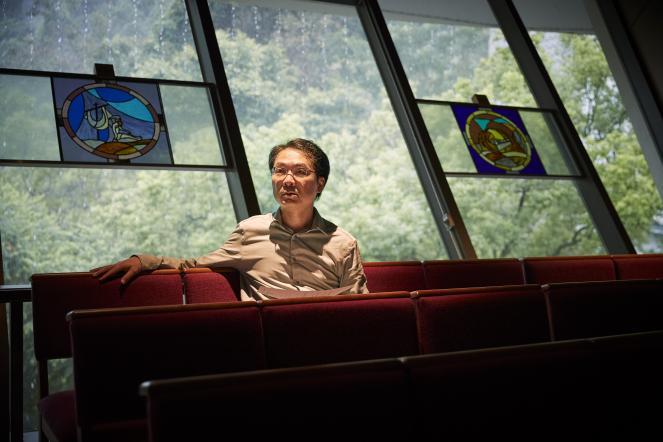 Hong Kong society felt the effects of the new law even before anyone saw its contents. Ahead of the law’s implementation on Tuesday, many protesters deleted their Twitter accounts and Telegram messaging app groups, fearful their posts could be used as evidence against them. The founding members of the pro-democracy group Demosisto—Joshua Wong, Nathan Law, Agnes Chow, and Jeffrey Ngo—resigned over fears of the new law. The group itself disbanded. Pro-independence group Hong Kong National Front also disbanded its local branch and moved operations to Taipei, Taiwan.

Article 23 of Hong Kong’s mini-constitution tasked the city’s government with enacting a national security law. But when the legislature tried to pass the law in 2003, half a million people protested, forcing the chief executive to scrap the bill. After last year’s pro-democracy protests, Beijing decided to bypass the Hong Kong legislature and approve a plan to impose the law on Hong Kong during its annual National People’s Congress meeting in May.

The law establishes the Committee for Safeguarding National Security. Under the supervision of Beijing’s central government, it works in secret and operates outside of judicial oversight. The law also empowers a section of the police force—which can include officers from China—to focus on national security cases. A new division in the Department of Justice will prosecute national security cases. Hong Kong Chief Executive Carrie Lam will appoint the division’s leader.

Lam also chooses the judges who hear national security cases, but the special Office for Safeguarding National Security will take over cases officials consider more serious. Staffed with mainland officials, it can send criminals to China to face trial there and is not subject to Hong Kong law.

The crimes of terrorism, subversion, secession, and foreign interference are so broad they encompass vandalizing a metro station, blockading a road, providing funding or support to protesters, and meeting with foreign lawmakers to push for sanctions. The maximum punishment is life imprisonment.

The law applies not only to Hong Kong residents but also to nonresidents in Hong Kong as well as anyone residing outside the city. The law’s interpretation is solely in the hands of the Politburo Standing Committee, which means Beijing will get what it wants. 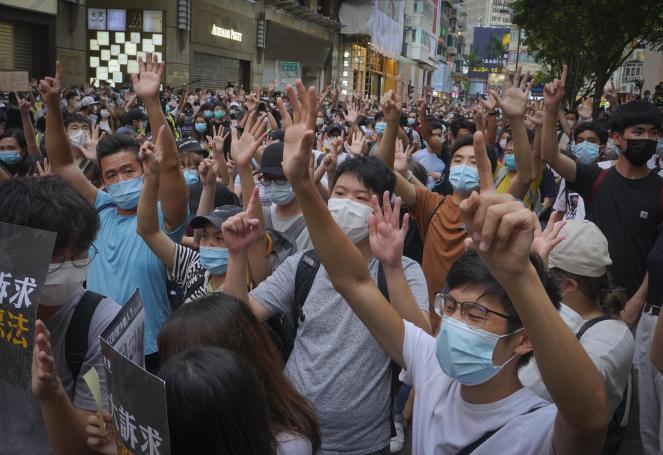 Protesters against a new national security law gesture on the anniversary of Hong Kong’s handover to China from Britain in Hong Kong. AP Photo/Vincent Yu

Academics like Yip fear the law could silence political discussions inside classrooms if topics such as independence arise. The law requires the Hong Kong government to strengthen communication and regulation about the national security law in schools, universities, media, the internet, and social organizations. This could mean requiring students to take patriotic education classes or start the day singing the national anthem.

Churches also fall under social organizations, Yip noted, so it’s possible the law could regulate what churches preach, or it could force them to display national flags.

Already the law has silenced some Christian leaders. The Baptist Convention of Hong Kong took down an article written by the group’s president on the negative responses to the law, according to Christian Times. The convention held a meeting earlier this week and decided not to respond to the bill publicly, as some feared it would affect their ability to run their schools and charities.

Cardinal John Tong Hon, the current administrator of the Hong Kong diocese, announced his support for the law last week and said it would not threaten religious freedoms in the city, although he had not seen the bill at the time. His predecessor and outspoken Chinese Communist Party critic Cardinal Joseph Zen disagreed, stating he had “no confidence” the new law would protect religious freedom. “Our religious freedom means that the affairs of the Church are handled by ourselves without the need to involve the government,” Zen said in a video. He also criticized the Vatican’s silence on Hong Kong, which he attributed to its desire to establish diplomatic relations with China.

Churches in Hong Kong faced division throughout last year’s pro-democracy protests, and Yip believes those divisions will continue. But he also believes this is a time for Hong Kong Christians to learn from their counterparts in mainland China as well as the early Church, which faced much greater opposition.

“This is not the end of the world,” Yip said. Despite the early Church’s hardships, “they still took up the cross and followed Jesus and preached the gospel. I think we need to learn from the early Church, which actually says something about the essence of our faith.”

—with reporting by Erica Kwong