In a tense national moment, murders rise in U.S. cities, and Christians in the hard-hit neighborhoods lament

Two people walk away from West Suburban Medical Center in Oak Park, in Chicago, where a 3-year-old boy died after being shot while riding in an SUV with his father a few blocks away. John J. Kim/Chicago Tribune via AP

In Atlanta on July 4, 8-year-old Secoriea Turner was shot and killed across the street from where police officers shot and killed Rayshard Brooks in June, a police shooting that prompted protests and the resignation of the Atlanta police chief.

“You killed your own this time,” said the girl’s father, Secoriya Williamson, at a news conference in Atlanta. “She didn’t do nothing to nobody.”

Also on July 4 someone killed a man who lived across from Englewood Family Outreach, a ministry to gang members and their families in Chicago. Pastor Justin Francis has been on staff at the organization for three years, and he says he knows 13 men who have been killed over that time.

When Francis lists off the work of the ministry, he talks about playing basketball on the ministry’s outdoor court, taking teens out for Chick-fil-A, and connecting them with job opportunities. But he also talks about going to funerals, and the ministry once had a local doctor come and teach people in the neighborhood how to patch bullet wounds with everyday items like socks.

This summer, major U.S. cities—including New York, Chicago, Miami, Philadelphia, and Atlanta—have seen their number of homicides rise, punctuated with a particularly violent Fourth of July weekend where stray bullets killed a number of young children. The largest 25 U.S. cities have seen a 16.1 percent increase in murders in 2020, even though violent crime overall is down in those cities, according to data from The New York Times.

In New York, shootings went up 130 percent in June compared with a year ago, and murders are up 23 percent compared with the first half of 2019. Murders are up 30 percent in Philadelphia, and 22 percent in Chicago. Crime experts over the years have cautioned against quick conclusions from small slices of crime data. It takes time to see trends, or to track the effect of a new bail law or the coronavirus lockdown. But the spike is concerning, and it’s piling on grief in local communities.

Experts have blamed the violence on the recent emergence from pandemic lockdown in many of these cities, gangs, domestic violence spurred by the lockdown, high levels of unemployment, or the lack of school and summer programs for teenagers. Some blamed the police for a work slowdown in response to the George Floyd protests.

Cities also have their unique local explanations for the violence. 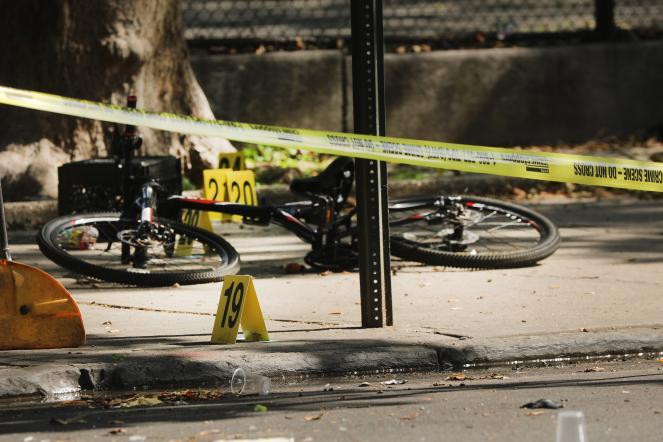 Police ballistic markers stand beside a child&#039;s bicycle at a crime scene in New York where a 1-year-old child was shot and killed on July 13. Spencer Platt/Getty Images

New York City Mayor Bill de Blasio blamed the closure of courts, where trials and indictments have been on hold because of the virus, though virtual arraignments are ongoing.

Top New York Police Department (NYPD) officials had a long list of concerns: They blamed certain criminal justice and police reforms, like the forthcoming ban on chokeholds. (The Camden County Police Department has had a ban on chokeholds without seeing a rise in murders.) The department remains upset about a 2019 state bail reform law, even though the state Legislature earlier this year scaled back the reform in response to concerns from law enforcement.

NYPD officials also blamed the coronavirus-motivated release of hundreds of inmates from prisons like Rikers Island. Meanwhile the NYPD has been solving shootings at a lower rate than normal, meaning perpetrators can continue the cycle of violence.

People at a local level had simpler explanations.

“When it gets warm, people start killing each other, sadly,” said Francis, the Chicago pastor. “People have got beefs, and now people are out, so it’s, ‘Oh I can get them now.’”

Francis, of course, has many explanations for violence beyond the summer heat, like poverty and long-term racism affecting city policies. Among the young people he serves he sees post-traumatic stress disorder from surviving previous shootings. He added that among young people who make it to 21, their goal often is to get out of the Englewood neighborhood.

He said the violence is not all about environmental factors—“there’s personal responsibility”—but added that most of these young people they serve at Englewood Family Outreach have “10 bad options and one good one.” One teenager who came to faith and whom he is mentoring has a mother and father in gangs. Another has a dad who has been pushing him to join a gang. A 17-year-old he is discipling has never been to a wedding.

“What a different life,” Francis said. “‘Oh, you’ve never been to a wedding? Oh, your cousin died in your arms when you were 9? Oh, your schools are terrible?’ There’s a lot more going on than, ‘You’re stupid and killing yourselves.’ What, are we Darwinists? Come on, man.”

After the June rioting and looting in Chicago, Francis said community members had complained to the mayor about not enough police protecting businesses in black and Hispanic neighborhoods. Without the police presence, Hispanic gangs had begun patrolling Hispanic businesses, which led to shootings. That’s what I saw when I was reporting in Baltimore in the wake of Freddie Gray’s death in police custody: Violence increased as police pulled back and the community began taking their protection into their own hands.

Francis is part of a church that is largely white and Chinese, and he said he sometimes hears white people using the black-on-black violence in places like Englewood as a talking point.

What should a Christian’s response be when violence rises like this? He suggested giving to local ministries working in the areas affected by violence: “Grief and lament—that should be one of the first things, sadness. … Then the church should look for ways to address it.”

This may sound crazy, but I don't see how we can motivate people in a city where the future is a career in fast food.

Manufacturing was what built the cities. That has been regulated out of our country, to be staffed by forced labor in China, and similar poverty in India. Larry Burkett wrote "What Ever Happened to the American Dream" in 1993. We are nearing 30 years since he exposed that raw truth. The progressive agenda offers free education in computer science, and medical careers, but what if you want to make something? I remember the textile mills in North Carolina, where Church World Service would get rolls of fabric for Baby Layettes. They were near the furniture manufacturing plants. (all gone)

Most look at steel and the coal that made the smelters operate. They still burn coal and pollute the air, but in a foreign country. Were those manufacturing towns a utopia? They were not much, but better than five generations of welfare, and family destruction.