“This is what we do over here”

Camden, where police and neighborhood ministries and businesses have rebuilt trust following high crime and police corruption, shows a path forward for other police departments in need of reform

The week that demonstrators around the United States displayed outrage over the police-instigated death of George Floyd, Camden, N.J., resident Brenda Antinore got an email from a captain in the Camden County Police Department.

Capt. Zsakhiem James sent out the department’s use of force policy, established in 2013, to local ministry leaders. He noted that the department wants to be transparent and also accountable to the community, so something like Floyd’s killing will not happen in Camden. Now, Camden police procedures do not allow chokeholds of any kind. James later told me the death of Floyd is “a stain on all of us” that set back by “decades” a movement toward “realistic community policing. It erodes the trust. It erases it.”

In Philadelphia, Pa., on the weekend after Floyd’s death, rioters smashed windshields of police vehicles, looters set fires in businesses, and police shot rubber bullets and tear gas into crowds of protestors. A social media video showed a Philadelphia SWAT officer pulling down the facemasks of kneeling protestors and spraying pepper spray into their faces. That incident is under investigation. Because of the violence, Philadelphia officials on May 31 ordered all retail stores to close at 2:30 p.m.

Just across the Delaware River in Camden, none of that happened. The weekend that riots began, a Camden hair salon owner organized a protest against police brutality, and contacted Camden police about it. The police, including the chief, asked if they could join the protest, and they marched with the protestors. At night things remained peaceful.

Camden’s protest with police joining in was more than a photo-op. It reflected years of work rebuilding trust between the police and residents of the city that a decade ago had a reputation as one of the most violent in America. Before all of this, the Camden police and community have regularly gone on “peace walks,” walking through neighborhoods together, sometimes praying as they go.

“The police have done a good job of not only ensuring public safety but cultivating bridges with the community,” said Ernest Grant II, lead pastor at Epiphany Camden and an African American. “I don’t feel like the police are antagonizing me or intentionally trying to stoke violence. They feel like the guardians and protectors.” He added that for systemic change in the city, “church can’t do it on their own, police can’t do it on their own.”

The week when protests rippled across the country, Brooklyn Borough President Eric Adams said on WNYC’s Brian Lehrer show that Camden “could be a model.” Other police departments began to adopt some of the reforms that Camden had undertaken years ago.

“What we’ve done started long before last week,” said James. “You have to meet with the community in the absence of crisis. You have to put that social currency in the bank … before they need you.”

In 2012, Camden police were living a different story. Four officers attempted to arrest a suspected drug dealer, only to have a crowd of more than 100 attack them and free the suspect. That year Camden had a per capita murder rate five times that of Chicago. Several officers had pled guilty in a major corruption case.

State, county, and city leaders decided to dissolve the department entirely, turning it from a unionized city force into a non-unionized county force. Camden Mayor Frank Moran told me in 2018 that the police union had stood in the way of the reforms they tried to enact: “The police union refused to give anything.”

The new Camden police force unionized after reforming, but with lower salaries. That allowed the county to hire more officers, which made a big difference in covering territory on foot patrol, the goal of its new community policing approach.

Camden Police Chief Scott Thomson, who retired last year, headed up the department through its dissolution and reformation. He and Moran both emphasized working with local faith leaders and walking neighborhoods. They also ramped up technology like Shotspotter, a gunshot detection system.

From 2012 to 2017, Camden achieved a 26 percent drop in violent crime. Excessive force complaints in Camden have dropped 95 percent since 2014. The approach, leading Camden out of its worst crime rates, came to the attention of national police groups and academics studying policing.

Local officials elsewhere took notice. Baltimore had a massive police corruption case that resulted in convictions for eight Baltimore officers. In 2018, Baltimore state delegate Bilal Ali proposed that the city follow what Camden did: dissolve the police department, rehire the good officers, and institute reforms. “There is a blueprint for success, empirical data to guide us, and a light at the end of the tunnel,” Ali said about Camden.

Baltimore mayor Catherine Pugh immediately dismissed the idea. The next year she resigned amid a fraud case, and since received a three-year prison sentence. Until the protests, other localities had not followed Camden’s radical approach of dissolving its police force to reform it. On June 7, a veto-proof majority of the Minneapolis City Council announced that it would vote to dissolve the Minneapolis police department, but unlike Camden, the council talked about a “police-free future,” and acknowledged it had no clear plan for what that might mean. 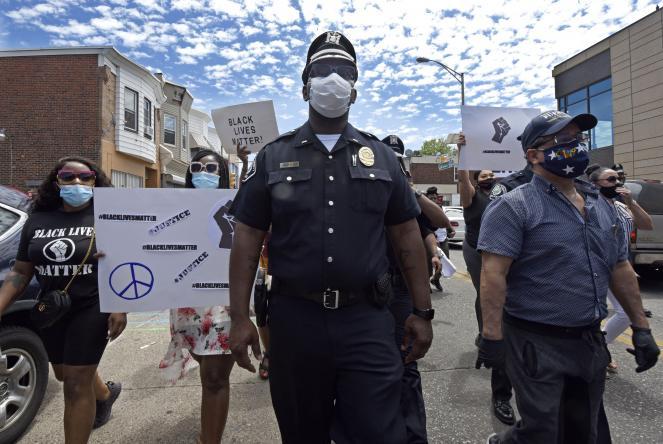 Capt. Zsakhiem James marches along with demonstrators in Camden. April Saul via AP

As I talked to Capt. James on the phone, he fielded constant interruptions from people in the community as he drove around answering calls after a big storm. He’s from Camden and has been with the police force for 28 years.

James is a trained negotiator: He recently took the lead in a 15-hour standoff, talking down an emotionally disturbed man with two knives who had barricaded himself in house. Eventually, the man came out without serious injuries to anyone, and police took him to a hospital for treatment. James notes that some police departments wouldn’t have waited that long for negotiations to play out.

“All I can say is how we do things,” said James. “I would never disparage another police department for how they respond to situations I’m not at. There are certain situations I can look at and say, ‘Yeah, I’m not going to do that.’ The Floyd incident—no one trains that way.”

Camden’s use of force policy, which Thomson crafted in 2013 and has revised over the years, has as its foundation “sanctity of life.” It has the unusual blessing of both the police union and the state American Civil Liberties Union.

“Use of force should never be considered routine,” the policy reads. “In exercising this authority, officers must respect the sanctity of all human life, act in all possible respects to preserve human life, do everything possible to avoid unnecessary uses of force, and minimize the force that is used, while still protecting themselves and the public.”

De-escalation is a “core value,” so Camden officers train in it over and over: “That’s the key,” said James. “They come into situations, they can rely on their training.”

The policy also states that officers shouldn’t position those under their control in a way that could obstruct breathing, and that officers “should not sit, kneel, or stand on a person’s chest or back, and whenever feasible should not force the person to lie on his or her stomach.”

Major police departments elsewhere are starting to adopt some of these use-of-force standards in response to the Floyd protests. On June 3, the Los Angeles Police Commission announced it plans to require officers to intervene when they see misconduct from fellow officers. The San Diego Police Department announced it will no longer use chokeholds.

Partnership with local ministries has been a core part of Camden’s revised approach. Top brass from the police, usually including Chief Joseph Wysocki, have had weekly meetings with dozens of leaders from local ministries to hear what’s going on in neighborhoods, respond to concerns, and talk about hot spots in the city.

When the COVID-19 outbreak began, the police moved those weekly meetings to Zoom, which has allowed more people to attend. Brenda Antinore leads a ministry to women suffering from addiction and working in prostitution in Camden: She and her husband Bill also run other street-based ministries under the umbrella organization Seeds of Hope (a 2014 winner of a WORLD Hope Award for Effective Compassion). Capt. James and Chief Wysocki recently visited the Antinores’ house in South Camden, where women in addiction recovery stay, to check whether they had enough personal protective equipment since they work on the street.

“If there wasn’t that open dialogue we would be guessing, and a lot of times it would be wrong,” said James. “We want to be the police department that the community needs.”

It’s hard going in a tough city with serious drug and crime problems. Parts of Camden had begun to recover after decades of post-industrial decline, but COVID-19 and the attempt to stop it have led to increased addiction, homelessness, and unemployment, Antinore said it is “as much if not more desperate out here than it’s ever been.” More tents have popped up Camden streets.

The Antinores and their team of volunteers have been cooking and boxing up breakfasts for hundreds. The other day one woman they help screamed for them to help an overdosing teenager: They were able to do so, using Narcan. “We’re really grateful to God that He’s allowed us to stay present,” Brenda Antinore said.

The Antinores and other ministry leaders have for years regularly met outside city hall to pray for the police, the mayor, and other community leaders, a gathering that is not advertised or public. Recently, Antinore overheard a woman on the phone outside the other day, talking to a friend in Philadelphia about the looting over there. “She goes, ‘Why are you doing all that, this is what we do over here,’” said Antinore. “It was good to hear that.”

Editor’s Note: WORLD has updated this story to correct a quotation from Camden Mayor Frank Moran.

Yes, we should be concerned about the aims of that group who's claiming ownership of "Black Lives Matter", but I'd imagine there are quite a lot of people using the slogan who don't know or care about everything the group means it to stand for.

Camden Police Chief Scott Thomson, who is identified earlier in the article.

I think that appeasement of the BLM thugs is totally misguided. We must understand they are a political party with similarities to the Chinese Cultural Revolution. If we get this wrong we will see the police force gone and in its place a thuggish group of BLM radicals controlling our streets and communities.

Listen to all of it to see what is really happening!

I may have missed something, but who is the Thomas in the phrase "Camden’s use of force policy, which Thomas crafted in 2013?"

Thanks for the article that reminds me that local solutions are often best in a big country like the USA.