Stranded at the airport

Private efforts to save at-risk Afghans, including Christians, are hitting U.S. roadblocks in Kabul

Afghan Christians have spent nearly four days outside the gates of the Kabul airport trying to board flights to safety. Among a group that began with more than 100 people are 22 leaders in the Afghan church whom the Taliban have identified and in some cases targeted with its Aug. 15 takeover of the city.

U.S. forces have repeatedly turned away Afghan Christians at airport entrances, despite the group’s following instructions from the State Department and U.S. military. Unable to return to their homes due to Taliban checkpoints, members of the group—including children and at least two pregnant women—have for two nights slept on the ground nearby, waiting for permission to enter the airport and board flights they’ve been assigned to. A Taliban fighter stationed at the airport shot one man in the group Wednesday. He sustained minor injuries.

By early Wednesday, 31 people from the group had been allowed into the airport. But the team that’s working to secure the Afghans’ evacuation is growing increasingly worried: Many believe the Afghans have only about 48 hours to make it aboard departing flights before the U.S. forces begin to close out operations at the chaotic airport, turn over operations to the Taliban, and themselves exit.

The United States and its allies say they have mounted one of the largest air evacuations ever, bringing out more than 88,000 people, including 19,000 in the last 24 hours. But with tens of thousands of targeted Afghans and a large number of Americans and other foreign citizens still stranded, private contractors have joined the effort. Seeing the challenges for what began as a haphazard U.S. operation, they’ve deployed extraction teams to Kabul and to staging points in the Persian Gulf to bring out additional foreigners and Afghans. The Kabul airport remains the only real departure point, with the United States running air traffic control.

Advocates earlier this week helped organize the extraction operation for these Hazara Christians—part of an ethnic minority and a religious group threatened by the Taliban—after it became clear the Christians were in danger. As WORLD has reported, the Taliban sent a letter Aug. 12 threatening one of the leaders of a 500-member house church network and later visited his home. He and others went into hiding, saying they did not want to leave Afghanistan. 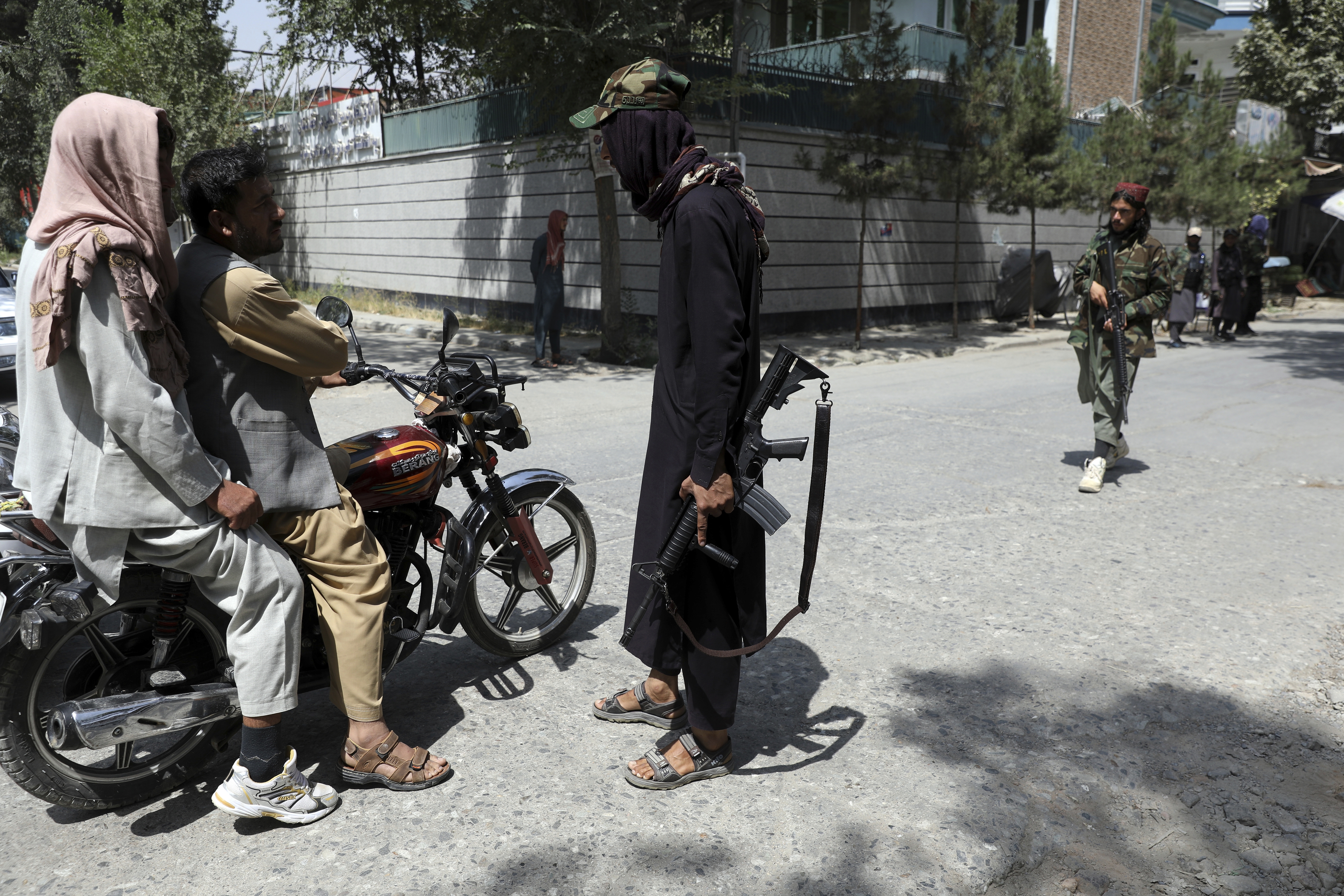 But as the Taliban’s grip on the city tightened and President Joe Biden repeated the U.S. intent to end the airport evacuation effort by Aug. 31, many Christians agreed it was time to go.

With members of the Afghan Christian community now living in the United States, Nadine Maenza, chairman of the U.S. Commission on International Religious Freedom (USCIRF), helped coordinate the effort. On Monday USCIRF, an independent commission charged with advising the State Department, in a statement called on the Biden administration to include Afghan religious minorities in its evacuation efforts and to prioritize them for refugee resettlement.

Aircraft, funding, and additional coordination came from aid groups that have worked in Afghanistan, including Mercury One, a nonprofit headed by a U.S. Air Force veteran that has successfully rescued Christian and Yazidi women from ISIS- and al-Qaeda-controlled territory in Iraq and Syria. The group receives funding from the Nazarene Fund operated by radio and television host Glenn Beck.

Mercury One confirmed it was part of the operation, and a source with the organization (not named for security reasons) said the group has evacuated 1,940 people from the Kabul airport since Monday, with a fifth planeload of evacuees departing Wednesday.

Mercury One focused on at-risk Afghans who include Christians. It’s been working with the U.S. authorities, forwarding to the State Department names the organization has already vetted for its flight manifests. The State Department vets those names, then forwards them to the U.S. task force inside the Kabul airport. From there, the task force sends the names to the gates leading into the airport, where U.S. Marines cross-check the arrivals and admit those whose names are on the flight manifests. “It is organized chaos,” the Mercury One source said.

When the manifests containing their names had been approved and sent to the airport, the Christians left their safe houses and proceeded across the city to the airport. But they were not allowed in their designated gates. Subsequent attempts also were unsuccessful, despite night-and-day rounds of communication among U.S.-based planners, aviation operators in Dubai, the military, and diplomatic sources.

“We’ve had empty planes on the tarmac and cannot get the people to them,” said Maenza. “At this point we are having to run operations against our own government to get people into the airport.”

Maenza and others believe the hurdles are largely bureaucratic, but the obstacles leave vulnerable Afghans without further options, while those who have money and connections have boarded planes.

For the Christians, fear has mounted. They’ve been trapped outside the airport near Taliban checkpoints and believe they cannot safely return to their homes. Manifests resubmitted to U.S authorities note that the group includes several babies plus other children vomiting and dehydrated. One mother is reportedly eight months pregnant with “pain” and “possible contractions, low blood pressure.” Several are handicapped. The manifests list all members of the group as religious and ethnic minorities.

Advocates for vulnerable Afghan groups are urging the White House to extend evacuations beyond Aug. 31. In a statement Wednesday, World Relief called on the Biden administration to include ethnic and religious minorities in evacuations. President Myal Greene said, “To abandon them to the Taliban as part of the schedule set by the Taliban is morally unacceptable.”

WORLD has updated this story to correct a reference to the leadership of Mercury One.

The bombers who killed those marines had to go thru several security check points. Alas, the security checkpoints are under the C2 of Talib forces not US or NATO troops.

I will never understand why we gave away the best most strategic airfield in that entire region. Bagram was awesome according to a man at church who was in and out through it numerous times. Rumor has it there was a Chick Fil-A concession in there and when the owner declined to hang up a big rainbow flag they decided no one should use the airfield at all. (Sarcasm now off). I realize Worldmag and NR have overlapping readerships but others will learn a lot (the actual truth, not by attempt at Babylon Bee/Duffel Blog humor) from a great essay by Bing West. There is also a great article on the real reason we prematurely surrendered command and control of Bagram.

Giving up Bagram before the evacuation was completed was colossal idiocy. Someone somewhere up the chain made a colossal goof and he or she will not be demoted, relieved for cause or even given a negative annual performance rating.

Let us call this for what it is. They are bringing out 100,000 mostly Muslims but they won’t bring out the Christians. Hmmm. I wonder why?
As we see the Democrat’s focus is removing barriers to stopping illegal immigrants at our southern border, we see a massive bill to eliminate protections to our elections, and we see restrictive lockdowns on our citizens for COVID yet complete disregard for it on our borders, this all points to the real objective which is bringing in those outside people to change America so the Democrats have complete political domination in America. It is time to call a spade a spade, and not be naive about what is happening. Specifically, they are keeping out the Christian from Afghanistan because they know they will not vote the way they want. And watch where they resettle the mostly Muslim immigrants for that tells you their agenda.

A friend and I just prayed for these people.

Praying for them, and asking others to pray and possibly contact their Congressional Reps. This whole debacle is a completely unnecessary tragedy of epic proportions. Those who have caused it by poor timing and lack of real preparation are hoping we'll move along to the next news cycle, but I don't think it can be forgotten so easily that we are throwing aside not only people who have stood by our side in time of war, and their now endangered families, but also some of the most vulnerable and innocent people who need our protection such as these Christian Afghans.

It is sickening and appalling that we have allowed this - too many government officials to name being guided by satan and not the Lord. Prayer is first, as you say; contacting our Reps. and Sens. is essential as well. The days ahead are going to be much worse than what we have seen so far.

I’ve contacted my representatives in Congress about this; forwarded the article to friends asking them to contact their representatives; put this on our church prayer list.