Nestled between farmland, a thriving shopping and restaurant complex that sprang up adjacently, and a busy interstate, a minor league ballpark sits empty and forlorn.

Visible from nearby Interstate 5, with the advertising banners that typically cover the chain-link outfield fence taken down, the ballpark provides passing motorists a glimpse into a seemingly bleak future: The crowds that came to enjoy summer evenings here for 23 seasons, watching major league prospects at one of the earliest stages of their professional baseball careers, won’t be back this summer—and may not have a next year, either.

This is Volcanoes Stadium, home of the Salem-Keizer Volcanoes of the short-season Class A Northwest League. Salem-Keizer is among 42 teams nationwide facing elimination from minor league baseball in 2021: Cities such as Great Falls, Mont.; Chattanooga, Tenn.; and Bluefield, W.Va.—to name just a few—also face losing their teams.

Making matters worse: The coronavirus pandemic that shut down the sports world back in March may rob those cities’ fans of one last summer watching ballplayers pursue their big league dreams. Major League Baseball (MLB)—which started its own abbreviated, 60-game season in late July—effectively canceled the minor league season on June 30, informing Minor League Baseball (MiLB) that big league clubs would not provide players to their affiliates in 2020.

The longer-term threat to the Volcanoes (an affiliate of the San Francisco Giants) and other minor league teams, however, doesn’t involve the pandemic. It involves paychecks.

Big league teams provide and pay the players, coaches, and training staffs of their minor league affiliates. Players at the lowest levels make as little as $275 per week and only during the 2½ months of the regular season. Minor leaguers thus demanded a wage increase when the National Association of Professional Baseball Leagues, the minors’ governing body, began negotiating a new agreement with MLB—the current one expires in September.

MLB owners agreed to increase player salaries starting in 2021 but didn’t want to pay so many of them—especially since so few ultimately make it to the majors.

Chief among the arguments MLB owners have raised to justify their position are: (1) They want to cut down the time players spend traveling on buses; and (2) Many minor league teams’ facilities aren’t up to MLB’s standards. 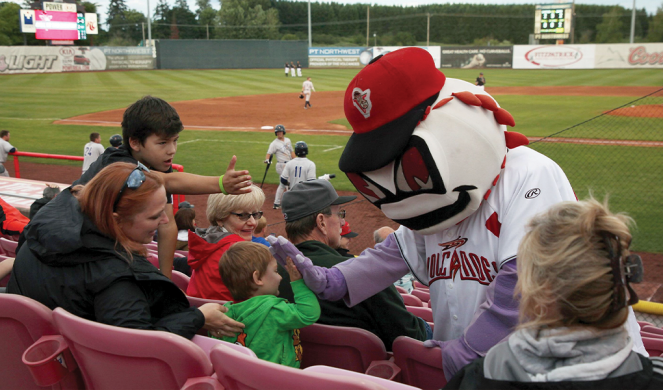 Neither assertion fits the Volcanoes: “The things that MLB has listed, the Volcanoes have,” said Keizer Mayor Cathy Clark, who has supported the team since it arrived in her town in 1997.

Indeed, the Volcanoes play roughly two-thirds of their 76-game regular-­season schedule within a roughly 120-mile radius without even leaving Oregon: In addition to at least 37 home games, their closest rivals, the Hillsboro Hops and the Eugene Emeralds, each play roughly an hour away. “Our travel time is the best of any team in the Northwest League,” said Mickey Walker, CEO of the Volcanoes.

As for Volcanoes Stadium: It is 23 years old, but it meets MLB’s requirements and is hardly in disrepair. It annually hosts Oregon’s state high-school baseball championships as well as college baseball games.

The Volcanoes’ owners, Jerry and Lisa Walker (CEO Mickey Walker’s parents) have committed to providing any facility upgrades that MLB or the San Francisco Giants request. In recent years they added a 1,000-square-foot weight room and an indoor hitting facility.

The Volcanoes’ problem is that the team is one of two low Class A affiliates of the Giants, and the team’s other one, the Augusta GreenJackets of the South Atlantic League, play in a sparkling 2-year-old ballpark. That makes the Volcanoes expendable in the MLB’s eyes. (The MLB wants each of its teams to have only one low Class A affiliate.)

But some think MLB hasn’t considered the cost of severing ties with small-town, rural America—specifically the cost to its future. Participation in youth baseball is declining for a variety of reasons. Minor league teams let youngsters connect with up-and-coming pros, collect their autographs, and see how action-packed the game can be.

MLB also stands to lose fans who root for the players who come through their towns—and often live with local host families while they’re there—long after they’ve moved up the ladder. “A lot of the guys stay in touch with their host families,” said Bob Bush, a longtime Volcanoes supporter who has worked for the team for the past seven seasons. “Some of them go so far as to arrange for their host families to come see a game after they make it to the majors—and they do it at their own expense.”

Such connections are especially vital in places that are far removed from major league markets, such as Keizer, a town of 36,478 that is 3½ hours away from Seattle, home of the nearest MLB team.

The Volcanoes, and 41 teams like them, are still around for the time being. There is at least a chance that they’ll still be around come 2021: Clark has written letters in support of the team, and Keizer’s representative in Congress, Kurt Schrader, is part of a bipartisan group of legislators who have gone to bat against MLB’s plan.

Mickey Walker remains both optimistic and determined. “I really do feel we have a track record of success here,” he said. “We’ll do whatever needs to be done to make sure baseball’s going to be around. It’s in the Lord’s hands after that.”

Now, the message board announces that the ballpark is available for rent on Airbnb.com: For as little as $1,000, fans can rent out the ballpark, bring 16 or more of their closest friends, use all of the ballpark’s facilities—field, clubhouse, batting cages—and equipment, and even spend the night. Food and beverages from the park’s concessions stand cost extra.

Volcanoes CEO Mickey Walker got the idea after learning that the Pensacola Blue Wahoos, a minor league team in Florida, was renting out its ballpark on Airbnb to generate income during the coronavirus pandemic. The gambit is paying off: “We’ve had quite a few bookings already in the first three days,” Walker said. “We’ve also gotten inquiries from many dozen who haven’t quite booked yet but are close.”

Renting out its ballpark is an ingenious way for the Volcanoes to make money when they’re not hosting baseball games—especially since the Northwest League season only lasts from mid-June through early September, not counting playoffs. Still, said Walker, “we’d rather have professional baseball there, no doubt about it.” —R.H.