Something old, something new

… for families forced to live in a shoe

Children tend to love familiar books, and that’s a good thing when libraries are closed and families are social distancing—but after several weeks of isolation, you may be crying out for something new. So here are three lists of books we hope you and your children will love: 36 picture books published since 2000, 41 classic picture books published in the 20th century, and 43 excellent chapter books also published before 2000, for a total of 120 books.

The list of newer books includes brief descriptions, along with the dates we reviewed them. For the pre-2000 books, we’ve only listed authors’ names and titles: You can read brief descriptions of each at wng.org/nifty_50 and wng.org/50_more_nifties. Inexpensive used copies of many are available at Amazon.com and other outlets.

We haven’t listed more than two titles per author, with one exception: C.S. Lewis. When a book is part of a series, we have sometimes noted that fact after the title. We’ve divided the newer picture books into four categories: Christian themes, stories, poems, and history. 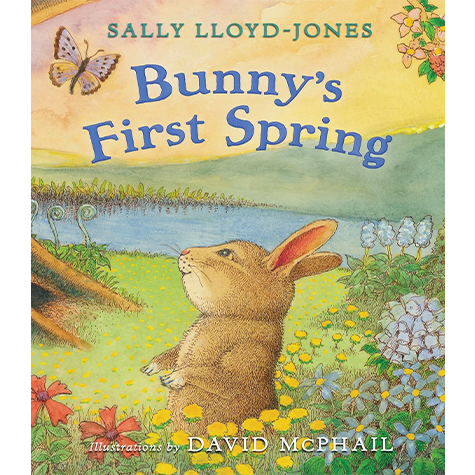 View the changing seasons from a young bunny’s perspective. The world seems bright and beautiful until fall when it appears that it might be dying.

Bunny’s First Spring by Sally Lloyd-Jones views the changing seasons from a young bunny’s perspective. The world seems bright and beautiful until fall when it appears that it might be dying. Delightful illustrations accompany the simple story with a subtle Easter message about death preceding new birth. (4/18/2015)

In The Moon Is Always Round, Jonathan Gibson offers a reassuring way to explain God’s goodness to children even when it’s hard to see (in this case, after a stillbirth). (2/1/2020)

The Watcher, written by Nikki Grimes and illustrated by Bryan Collier, is a retelling of Psalm 121 aimed at an 8-and-up audience. It deals thoughtfully with heavy subjects—bullying, loneliness, love for the outcast, doing the hard thing, putting to death pride—but it ends on a hopeful note. (2/17/2018)

In The Biggest Story, Kevin DeYoung retells the Bible’s central story, showing God—clearly the hero—continually rescuing His wayward people, fulfilling His promises, and working toward our final reunion in the new heaven and earth. (10/31/2015)

Marty Machowski’s The Ology is a kid-friendly introduction to the study of God. His presentation of God’s character through clever, humorous essays—with titles like “The Ology of Creation”—sets this book apart. (4/2/2016) 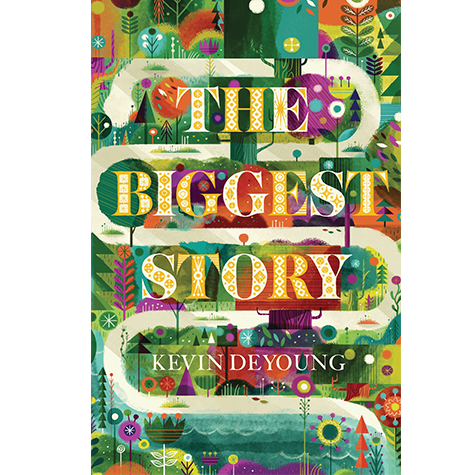 Kevin DeYoung retells the Bible’s central story, showing God continually rescuing His wayward people, fulfilling His promises, and working toward our final reunion in the new heaven and earth.

All-of-a-Kind Family Hanukkah by Emily Jenkins and Paul O. Zelinsky: Based on the middle-grade novels by Sydney Taylor, this picture book tells of a Jewish family living on Manhattan’s Lower East Side in the early 20th century. (2/2/2019)

I Really Want to See You, Grandma by Taro Gomi is a story about a determined little girl and her equally determined grandmother who live far apart and desperately want to visit. (2/2/2019)

Stick! by Irene Dickson shows the endless ways a boy can entertain himself with a stick and a dog. (10/13/2018)

With only 25 words and simple illustrations, Anna Kang’s funny You Are (Not) Small introduces preschoolers to relative size. (9/15/2015)

Peggony-Po: A Whale of a Tale by Andrea Davis Pinkney is a tall tale of a boy carved from wood who vows to catch the whale that ate his father’s leg. Vivid language and vibrant images combine to tell an action-packed story. (12/16/2006)

The precocious narrator of Sally Lloyd-Jones’ How to Get a Job by Me the Boss explains secrets of work: “If you are a Doctor, you need to get a White Coat and some Patients,” and “Here’s what isn’t a job: Sitting in your chair eating cookies.” Lloyd-Jones is a treasure, a Christian who writes both explicitly Christian books (The Jesus StoryBook Bible) and fun books for the general market. (7/2/2011) 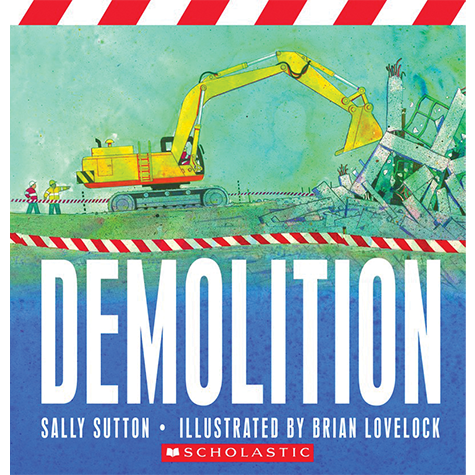 A noisy book, sure to delight little people who love trucks and destruction. Its pages are filled with wrecking balls and bulldozers, short and punchy sentences, and vivid action words.

Demolition by Sally Sutton is a noisy book, sure to delight little people who love trucks and destruction. Its pages are filled with wrecking balls and bulldozers, short and punchy sentences, and vivid action words: “Work the jaws. Work the jaws. Bite and tear and slash. Dinosaurs had teeth like this! Rip! Roar! Crash!” (5/19/12)

The first page of This Is Not My Hat by Jon Klassen shows a small fish wearing a tiny derby hat, plus these words: “This hat is not mine. I just stole it.” From that brazen beginning Klassen tells a moral tale with few words and simple pictures. (11/17/2012) Klassen’s other “hat” stories—I Want My Hat Back and We Found a Hat (2011 and 2016) are also fun.

Chloe is the elementary-aged narrator of Adrian Simcox Does Not Have a Horse by Marcy Campbell. She’s indignant because poor, red-headed Adrian insists he has a horse and she knows that’s not true. The inside jacket flap reads, “Sometimes we have to learn to see with kindness.” That’s the message of this pitch-perfect picture book, but as in the best books, it shows rather than tells. (3/2/2019)

Hello Lighthouse by Sophie Blackall portrays the daily life of a lighthouse keeper as he faithfully tends the light that keeps passing ships from crashing onto rocks. (3/2/2019)

In Saturday Is Swimming Day, author and illustrator Hyewon Yum captures the trepidation children often feel when learning to swim. The illustrations capture through body language the pains and joys of overcoming the fear of water. (6/9/2018)

Martin Jenkins’ Beware of the Crocodile is nonfiction that reads like a storybook. Illustrations often stretch across two pages, leaving plenty of room for teeth. On one spread, we see the shadow of a huge croc waiting for a creature to come close. “And then? Then there’ll be a sudden lunge and a tremendous SPLASH. And then? Oh, dear. What happens next is rather gruesome. In fact it’s so gruesome that we should skip the details.” (8/3/2019)

Mr. Squirrel and the Moon by Sebastian Meschenmoser features an expressive squirrel with a lively imagination who wakes up one morning to find something large, yellow, and round on his branch. He thinks it’s the moon, though alert readers will realize it’s a wheel of cheese that has fallen from a farmer’s wagon. From there the story spirals off into lots of fun directions. (9/5/2015)

Jabari Jumps by Gaia Cornwall is about a boy trying to overcome his fear of the high dive. His dad tells him it’s OK to be scared and shares a trick for overcoming it. (6/10/2017)

Growing Up Pedro by Matt Tavares focuses on the relationship between former Red Sox pitcher Pedro Martinez and his older brother Ramon, a star in his own right. (6/10/2017)

Sing a Song of Seasons: A Nature Poem for Each Day of the Year offers 366 poems selected by Fiona Waters—including one for Feb. 29. Lovely illustrations by Frann Preston-Gannon accompany the poems in this coffee-table book. (10/13/2018) 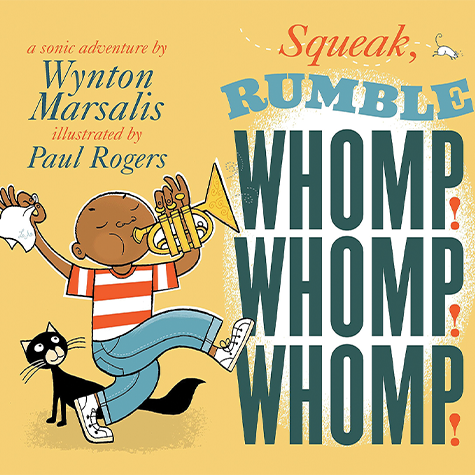 When You’re a Pirate Dog and Other Pirate Poems by Eric Ode and illustrator Jim Harris. The poems in this captivating collection will turn even the most reluctant child into a lover of doggerel. The book features rhymes like this one from the title poem: “When you’re a pirate dog, your life is free from troubles. They never put you in a tub with smelly soap and bubbles.” (5/19/2012)

Home in the Woods by Eliza Wheeler is a true story of a family that survives and prospers despite hardship. It offers beautiful illustrations and a hopeful message in our present circumstances. (2/29/2020)

William Boekestein proves that it is possible to make the story of a 17th-century synod compelling to children. The Glory of Grace: The Story of the Canons of Dort offers attractive woodcut-style illustrations and text focusing on a doctrinal battle between Calvinists and Arminians that was important theologically and also played a role in European politics. (11/17/2012) 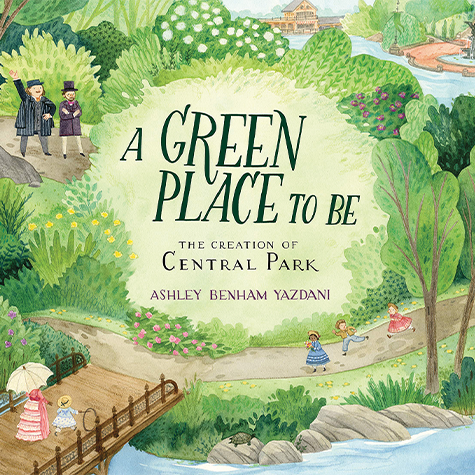 It Began With a Page by Kyo Maclear tells the story of Gyo Fujikawa, the Japanese American illustrator who convinced her publisher in the 1960s to print her “international set of babies”—babies of all colors—despite the typical all-white representations of the time. Delicate and expressive illustrations help tell the story of this unassuming hero who recognizes the power of a children’s book to change the world. (2/29/2020)

Ashley Benham Yazdani’s A Green Place to Be tells how Calvert Vaux and Frederick Law Olmsted created New York’s Central Park. It began with a contest, and they almost missed the deadline. The book focuses on both the park’s design and its construction. (5/11/2019)

Lumber Jills by Alexandra Davis tells the story of the British women who joined the Women’s Timber Corps during WWII, keeping the country supplied with lumber for planes, ships, newspapers, and more. (6/29/2019)

In Six Dots, Jen Bryant explores the early life of Louis Braille. The storyline traces how Braille’s remarkable resilience and creative thinking led to the invention of the Braille system. (4/15/2017)

The Boo-Boos that Changed the World by Barry Wittenstein is a picture book biography of Earle Dickson, the inventor of the Band-Aid. (9/1/2018) 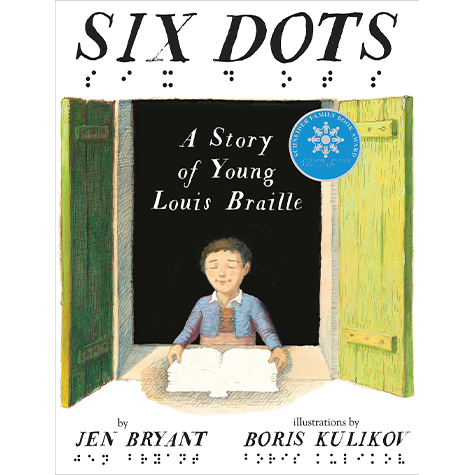 Jen Bryant explores the early life of Louis Braille. The storyline traces how Braille’s remarkable resilience and creative thinking led to the invention of the Braille system.

During the Korean War, the U.S. Marine Corps gained an unlikely recruit: a small red mare named Reckless. In Sergeant Reckless, Patricia McCormack tells the story of the former racehorse that went through special training to prepare for the rigors of battle. (2/3/2018)

Who Says Women Can’t Be Doctors? by Tanya Lee Stone tells the story of Elizabeth Blackwell, the first woman doctor in America. In this picture book, Stone steers clear of feminist agendas and sticks to history, highlighting the determination Blackwell needed to overcome both obstacles and discouragement. (8/9/2014)

The Little Engine That Could—Watty Piper (1930)

The Tale of Custard the Dragon—Ogden Nash (1936)

The Story of Ferdinand—Munro Leaf (1936) 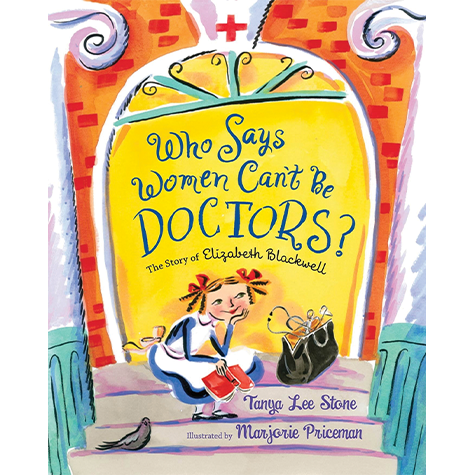 Tanja Lee Stone steers clear of feminist agendas and sticks to history, highlighting the determination Blackwell needed to overcome both obstacles and discouragement.

Harold and the Purple Crayon—Crockett Johnson (1955)

Cars and Trucks and Things That Go—Richard Scarry (1959)

Where the Wild Things Are—Maurice Sendak (1963)

Sylvester and the Magic Pebble—William Steig (1969)

The Knight and the Dragon—Tomie de Paola (1980)

When I Was Young in the Mountains—Cynthia Rylant (1982)

Island of the Blue Dolphins—Scott O’Dell (1960)

The Cricket in Times Square—George Selden (1960)

Where the Red Fern Grows—Wilson Rawls (1961)

Charlie and the Chocolate Factory—Roald Dahl (1964)

All Creatures Great and Small—James Herriot (1972)