Return of the Taliban

How did the Islamist group regain control in Afghanistan after two decades of U.S. occupation?

Editor’s note: The Taliban captured the Afghan city of Mazar-e-Sharif on Saturday, a day after this story was published. The group captured Kabul, the capital of Afghanistan, on Sunday, effectively taking control of the government as President Ashraf Ghani fled the country.

In 2001 President George W. Bush delivered an ultimatum to the ruling Taliban in Afghanistan: Hand over the terrorists responsible for 9/11 attacks “or share their fate.” Over days, as silence from Taliban leader Mullah Mohammed Omar deepened, Bush repeated the demand and warned Omar, “We will defeat you.”

Within a month of launching the war in Afghanistan, U.S. forces drove the Taliban from power, forcing Omar and al-Qaeda leader Osama bin Laden into hiding in Pakistan.

Today with the Taliban on the verge of retaking the country, questions abound over what its once-unthinkable victory would mean for Afghans and for Americans. In recent weeks the Taliban has captured more territory than it controlled during its 1996-2001 rule.

Should it succeed in seizing the country’s fragile democratic government, it will set the stage for Afghanistan reverting to a brutal Islamic regime and again becoming the operational center for global jihad. That would mark a decisive defeat for the United States in the longest war in American history.

How did the Taliban resurgence happen?

President Joe Biden announced U.S. troops would withdraw fully from Afghanistan and turn over bases and armaments to the Afghan security forces starting May 1. His pledge followed a “peace” agreement reached with the Taliban in 2020 under President Donald Trump.

Three days later, on May 4, the Taliban launched its first offensive and succeeded in routing Afghan forces in districts in both the north and south. As the United States withdrew from outposts in key provinces, the Taliban quickly moved in.

The United States initially provided air cover to Afghan forces, but as that has declined so has the Afghan army’s staying power. By mid-July the Taliban threatened 16 of Afghanistan’s 34 provincial capitals. In early August it succeeded in taking eight provincial capitals in just five days. On Thursday, Taliban forces took three major cities within hours of one another. They seized Herat in the west, the country’s third largest city, and Ghazni in the east, opening a key link to Kabul, the capital. Ghazni also has long been recognized as a safe haven for al-Qaeda.

On Friday the Taliban took control of Kandahar in the south, a city of 600,000 and the second-largest in the country. A local official told Reuters the city was “a ghost town” with residents leaving or hiding in their homes.

After a lengthy siege the fighters also took control of nearby Lashkar Gah. Only weeks before, U.S. airstrikes had helped Afghan forces hold the city. The Taliban commander leading the final assault was one of 5,000 jailed fighters the United States pressured the Afghan government to release as part of the U.S.-Taliban accord.

The string of Taliban victories leaves the group with a firm grip on western and southern Afghanistan, including 18 of 34 provincial capitals. The government continues to hold key northern areas, including the city of Mazar-e-Sharif and the capital Kabul.

A top Afghan official, not named due to the security threats, told me Afghan forces have made gains outside Mazar-e-Sharif, and there is still time for international players to “stop Taliban attacks and end the threat it poses to international security.”

The official said he did not agree with Biden’s withdrawal decision “even though we respect it. What’s important to understand is that it came with too much pressure on the Afghan government and too much respect for the Taliban.”

Did the Taliban outmaneuver the United States?

Two Afghan presidents called for a negotiated settlement with the Taliban to end the war, yet the Taliban resisted offers to sit down with the U.S.-supported Afghan government, insisting instead on talking directly with the United States.

U.S. officials secretly met with Taliban members in 2018 in Qatar, beginning a round of negotiations that did not involve the Afghan government. That culminated in a February 2020 peace agreement approved by President Donald Trump.

The deal called for a total withdrawal of all American and NATO troops from Afghanistan in exchange for a Taliban pledge to pursue peace with the Afghan government and to prevent al-Qaeda from operating in areas under its control. U.S. special envoy Zalmay Khalilzad and the Taliban’s political leader Abdul Ghani Baradar signed the agreement in Doha, with Secretary of State Mike Pompeo looking on.

No Afghan officials were party to it. In fact, it was signed just as Afghanistan completed a contested presidential election that left uncertainty over the legitimacy of Ashraf Ghani’s victory and a weakened Afghan government.

Pentagon spokesman John Kirby pauses during a briefing at the Pentagon in Washington on Thursday. AP Photo/Andrew Harnik

The Taliban soon resumed military operations in Afghanistan, violating the terms of the agreement with little consequence. Security and military experts say no one should have been surprised by a Taliban offensive to retake the country—only by how fast it has succeeded.

Could it have gone differently?

Yes, said the 15-member Afghanistan Study Group. The bipartisan panel was mandated by Congress and includes lawmakers and top military officers, including former Chairman of the Joint Chiefs of Staff Joseph Dunford. It concluded in its report released this February that there was “real opportunity” for an “enduring peace settlement” involving Afghan officials, the Taliban, and regional allies. But it warned that a tight withdrawal deadline could “increase the chances of a breakdown of order in Afghanistan.”

The group called for a revision “to ensure that a complete withdrawal of U.S. troops is based not on an inflexible timeline but on all parties fulfilling their commitments, including the Taliban making good on its promises to contain terrorist groups and reduce violence against the Afghan people, and making compromises to achieve a political settlement.”

President Biden repeatedly has rejected the recommendation, insisting in a July speech the military mission in Afghanistan will conclude on Aug. 31 and “the drawdown is proceeding in a secure and orderly way.”

The Taliban’s strategy has been “brilliant,” said Bill Roggio, senior fellow at the Foundation for Defense of Democracies and editor of Long War Journal. By starting with capturing vulnerable districts in the north, south, and west, the militants were able to increase control gradually from rural areas into larger population centers, cutting access to government bases of support, winning over or capturing key warlords, and along the way acquiring left-behind U.S. military equipment. 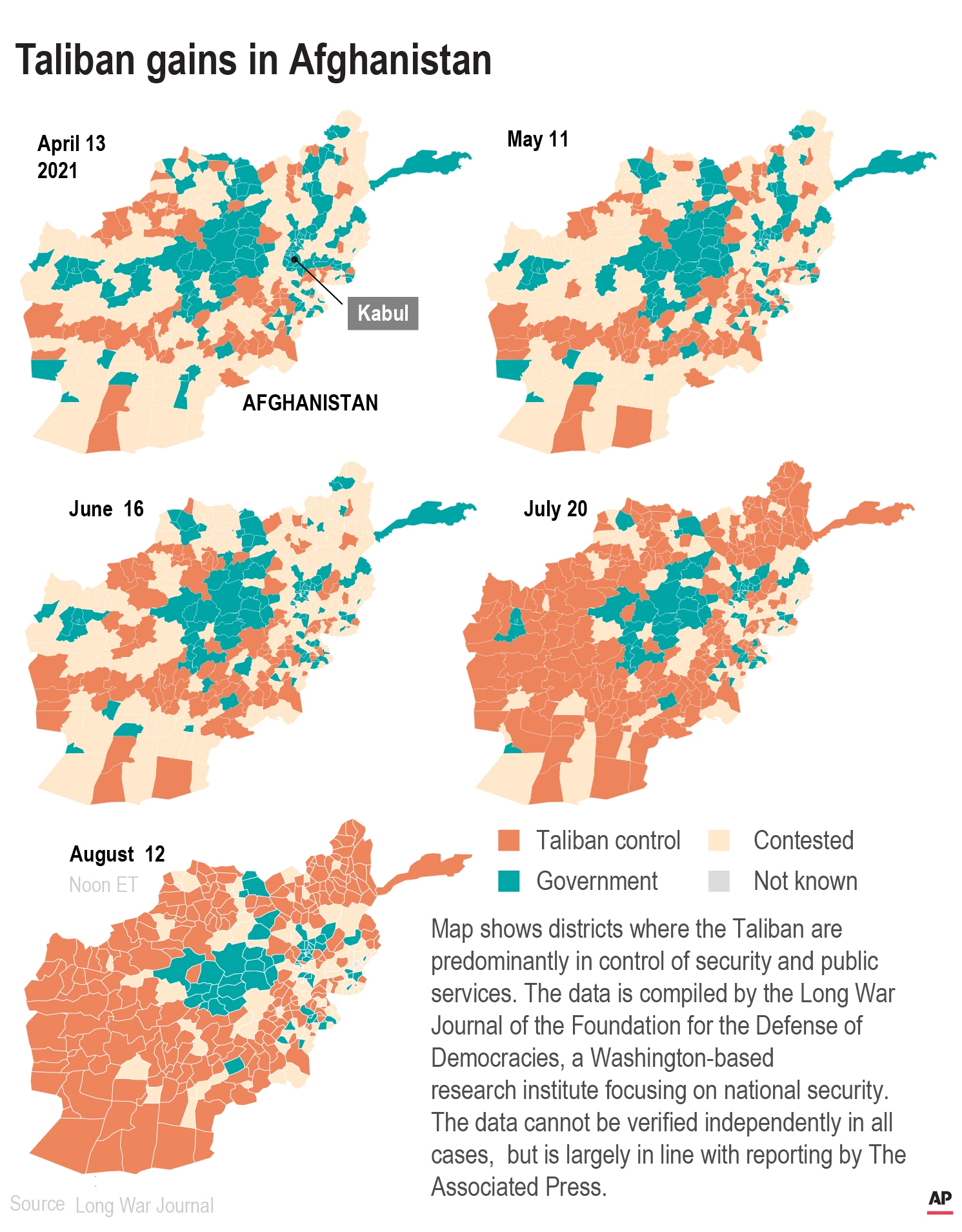 Should the Taliban prove unstoppable, he said, “it will be one of the greatest intelligence failures in decades, certainly in U.S. military history.”

What is the fallout for Afghan civilians?

“This is a heavy time. We’re getting very little sleep and have a lot of stress,” the Afghan official told me. “Even our own families are not safe right now.”

Aid organizers say at least half a million Afghans have been displaced by the Taliban offensive, but few have any options for leaving the country. On Friday Afghans who hold valid visas crowded buses to get out and booked up commercial flights departing Kabul’s international airport. But most countries, including the United States, have closed their borders to Afghan asylum-seekers.

About 18,000 Afghans qualify for U.S. special immigrant visas, or SIVs, because they worked as translators or in other ways for the U.S. military. But only about 1,250 have been successfully processed or evacuated, according to the State Department. On Thursday the White House said it would send about 3,000 additional troops to help evacuate the U.S. Embassy in Kabul, but it has left unclear the fate of SIV holders.

Several American aid organizations with long-standing work in the country spoke off the record, given the dangers to their operations. Each said they have evacuated their American and other Western workers and are trying to ensure Afghan staffers have protection. “We are in a holding pattern to see if it will be possible to go back, but that doesn’t look likely for some time,” said one. “Our worst-case scenarios of only a few weeks ago have now all come to pass.”

Internally displaced Afghans, fleeing the northern provinces due to fighting between the Taliban and Afghan security forces, take refuge in a public park Kabul on Friday. AP Photo/Rahmat Gul