Conventional science still fumbles with the question of how life began, but the best evidence points to a Designer

Accessible Science
Book of the Year

The Mystery of Life’s Origin: The Continuing Controversy is two books in one: a classic that in 1984 provided the base for the intelligent design movement of the 1990s, and a series of newly written, cutting-edge chapters that set the stage for a Roaring 20s decade of scientific advance.

The classic came into existence because Walter Bradley, then a professor at the Colorado School of Mines, understood that how life originated was one missing link in Darwinism: He asked “how you get started from scratch,” how does life come from nonlife? Bradley and Roger Olsen wrote a draft that found its way into the hands of chemist Charles Thaxton, whose first reaction was “Wow, this is kind of interesting. But why is there not more chemistry in it?” The three scientists met at Texas A&M, where Bradley had taken a teaching job, and Bradley and Olsen almost simultaneously responded to Thaxton’s objection: “You’re the chemist. You write it.”

He did, and the reaction was both historic and hysterical. The Mystery of Life’s Origin received praise from Dean Kenyon, who came to doubt his own conventional theory of chemical evolution, and other scholars. It powerfully influenced today’s most influential intelligent design advocate, Stephen Meyer, as well as mathematician William Demb­ski and a whole new generation of pioneers. But chemist Richard Lemmon snorted about “religious creationists,” as did others, and Mystery became tantamount to a banned book among conventional scientists.

Now to the present: Rice chemistry professor James Tour’s essay, which starts off the second half of the new volume, has the apt title, “We’re Still Clueless About the Origin of Life.” Tour appropriately ridicules reporters who fall for media hype about purported progress. He quotes What Is Life? by famed science writer Ed Regis, who explains, “Life began with little bags of garbage, random assortments of molecules doing some crude kind of metabolism. That is stage one. The garbage bags grow and occasionally split in two, and the ones that grow and split fastest win.” Tour: “Those ‘little bags of garbage’ have no more resemblance to living cells than a big bag of garbage resembles a horse.” Cells, we now know, are hugely complicated factories.

But didn’t the 1952 Miller-Urey experiment feature an electrical discharge forming some amino acids, thus showing that life could emerge apart from God? That’s what I learned in a chemistry class 53 years ago, and many WORLD readers probably did as well. Jonathan Wells in his Mystery chapter—“Textbooks Still Misrepresent the Origin of Life”—blows up the mistaken assumptions essential to the famous experiment and quotes what famed physicist Freeman Dyson said before his death in 2000: Miller-Urey “was supposed to be a true simulation of prebiotic chemistry on the primitive Earth. But now nobody believes this anymore.”

In other essays, astrobiologist Gui­llermo Gonzalez shows that his field has not answered the question, “How did life originate?” Stephen Meyer summarizes the growing recognition of cell, protein, and DNA complexity (no bags of garbage) and says truth-seekers should not ask, “Which materialistic scenario seems most adequate?” Instead, those “committed to following the evidence wherever it leads” will ask, “What actually caused life to arise on Earth?”

The past half-century has brought moon landings, genomes, ultrasound, integrated circuits, the internet, and many other scientific and technical advances. No one respected in conventional science, though, has been able to answer the fundamental question—how did life begin? The most likely scientific answer we have now, based on currently available evidence, is that an intelligent agent, existing before the advent of humans, designed life. 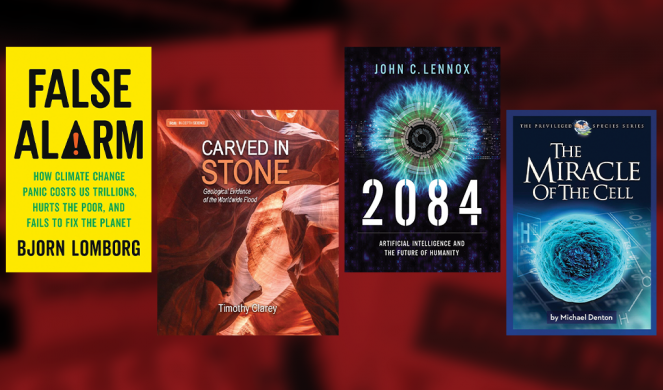 False Alarm: How Climate Change Panic Costs Us Trillions, Hurts the Poor, and Fails To Fix the Planet

Bjorn Lomborg cares about the poor and about our environment: He writes, “Global warming is real, but it is not the end of the world. It is a manageable problem.” Children now live in fear and some adults decide not to have children, but Lomborg shows that hurricanes and droughts are not more frequent and that 17 times more people now die from cold than heat. An obsession with global warming will waste trillions of dollars and crowd out investments in immunization, education, and other needs that would save and prosper many more lives: “Every dollar spent on fighting early child malnutrition results in $45 of social good.” Investment in better crop varieties, more fertilizer, and other innovations will help the poor more than cutting carbon dioxide.

Carved in Stone: Geologic Evidence of the Worldwide Flood

Timothy Clarey has a Ph.D. in geology and was a full professor of geology in Michigan, so he’s not proceeding from ignorance when he challenges faith in current theories. He rightfully criticizes mainstream unwillingness even to examine evidence for a worldwide flood and geological upheavals that could move mountains: “Contrary to uniformitarian thought, sedimentary rocks—and other geologic features—don’t require millions of years to form.” Clarey, who also spent eight years as a Chevron exploration geologist, states that “bacteria consume organic material even after it is buried,” so, “Oil and gas cannot be millions of years old, otherwise the remains would have been devoured long ago.” Young- and old-earthers can learn much from each other.

2084: Artificial Intelligence and the Future of Humanity

Oxford math professor emeritus John Lennox provides a clear introduction to a future in which the political issue might be not which humans will rule, but whether humans will have any say at all. The Asilomar AI Principles in 2017 stated, “Superintelligence should only be developed in the service of widely shared ethical ideals, and for the benefit of all humanity rather than one state or organization.” Given the omnipresence of sin, that seems unlikely, and what concerned C.S. Lewis in That Hideous Strength—the plan to “make man a really efficient animal”—75 years ago may be right around the corner 75 years from now, or even in 2084. Lennox distinguishes between narrow and broad artificial intelligence, so he’s no doomsayer, but he shows what the stakes are.

The Miracle of the Cell

For centuries “fearfully and wonderfully made” were just words about our bodies from Psalm 139. Now we have proof: Biochemist Michael Denton shows how vast is the chasm between some chemical soup and a cell filled with genetic information encoded in the double helix, and much besides. Despite decades of experimentation and hypotheses, Denton reports that “no one has produced any convincing explanation of how nature could have overcome this chasm. … Science, it seems, has reached an impasse.” Logically, those with yard signs saying, “I believe in science,” should also have signs saying, “I believe in intelligent design.” Denton says this realization and road-mapping regarding cells “will be of far greater intellectual consequence than any other discovery in science” during the past 500 years.

This page is part of WORLD’s 2020 Books of the Year section. Next: Understanding America.