He calls you friend

Encountering Christ’s mercy for the hearts of sinners and sufferers

Accessible Theology Book of the Year

If Americans remember Puritans around Thanksgiving each year, ­historical myths may clutter their thinking: Weren’t the Puritans dour Christians who majored on wrath and added kindling to the fire of already guilty consciences?

For example, Jonathan Edwards is usually remembered more for his sermon “Sinners in the Hands of an Angry God” and less for preaching the magnificent “Heaven Is a World of Love.”

Both sermons were true: Edwards wanted his congregants to know that God’s wrath is real, but that His mercy is remarkable to repentant sinners trusting in Christ alone for their salvation.

Dane Ortlund opens another Puritan portal into God’s mercy in his book Gentle and Lowly: The Heart of Christ for Sinners and Sufferers. The title references the only description in the New Testament that Jesus offers of His own heart.

“Come to me, all who labor and are heavy laden, and I will give you rest,” Jesus tells His followers. “Take my yoke upon you, and learn from me, for I am gentle and lowly in heart, and you will find rest for your souls.”

Ortlund mines that passage and finds stunningly good news. “You don’t need to unburden or collect yourself and then come to Jesus,” he writes. “Your very burden is what qualifies you to come.”

Does that sound too easy? If thoughtful Christians worry that Ortlund might be majoring too much on the compassion of Christ, the author uses Scripture and the works of Puritan writers to show the well of God’s grace doesn’t dry up for those who come to Him in faith.

Ortlund explores how the English Puritan Thomas Goodwin wrote extensively on these themes: “Goodwin wants to surprise readers with the biblical evidence that the risen Lord alive and well in heaven today is not somehow less approachable and less compassionate than he was when he walked on the earth.”

That Puritan sensibility puts its finger on a modern problem. It’s true that some corners of Christianity downplay the seriousness of sin, but other Christians downplay the sweetness of God’s grace.

It can lead some believers to a frustrating battle to conquer sin on their own, instead of remembering that Jesus “sides with you against your sin, not against you because of your sins.”

Maybe that sounds like Christianity 101, but even to the longtime believer wearied by his sin, it also sounds like the reminder that spring is coming after a long winter. Puritan John Flavel wrote: “Remember that this God in whose hand are all creatures, is your Father, and is much more tender of you than you are, or can be, of yourself.”

Perhaps a boiled-down way to think about what Ortlund expresses: If we are in Christ, God doesn’t just tolerate us. He welcomes us. He doesn’t only love us. He likes us. That’s what it means to be His friend.

Ortlund makes it clear this is only possible because Jesus suffered God’s wrath for sin on the cross. In that way, the book is an uncommon volume that could speak deeply to two very different groups of readers: mature Christians already familiar with God’s grace and non-Christians wondering about a God of both wrath and love.

For both groups, the message is clear: Unrepentant sinners really will fall into the hands of an angry God, but those who come to Christ by faith will discover that heaven really is a world of love. 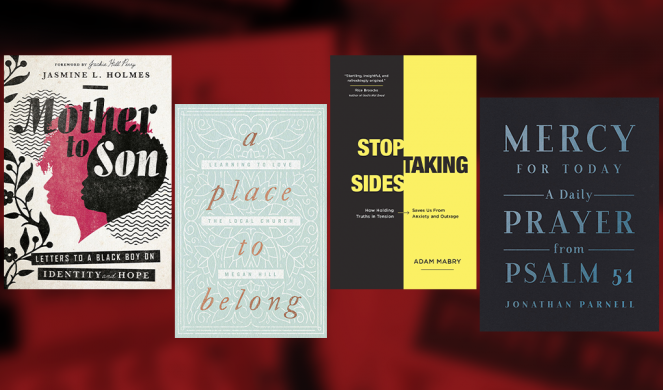 Mother to Son: Letters to a Black Boy on Identity and Hope

Jasmine Holmes pens a series of beautiful messages to her young son in this book. The letters are also helpful for Christian readers as they follow a black mother’s apprehensions and hopes for her son growing up in America and in the church. Holmes, the daughter of Pastor Voddie Baucham, shares her father’s deep faith but doesn’t always see eye-to-eye with him on race-related applications. Talking about her experience as a black woman who grew up in predominantly white churches makes some people uncomfortable. “They’re afraid that I want to sneak attack them with Marxist ideology,” she quips. “But what I want is for my siblings in Christ to consider that their experiences of evangelical culture are not universal. That our unique stories and experiences can serve to amplify the fact that Christ’s saving power infiltrates every tribe, tongue, and nation.”

A Place To Belong: Learning To Love the Local Church

Megan Hill has written a love letter to the Church in A Place To Belong. With many Christians separated from public gatherings for weeks or months this year, this book might cause a craving for casserole-laden tables in fellowship halls—not for the pasta salad, but for the feast of fellowship in Christ. Hill reminds readers that in a complex world, God carries out His mission and purpose in simple ways: Ordinary worship by ordinary people gathered in ordinary places. Every congregation is full of sinners, but even with divisions and failings, we should hold the Church in high regard because she belongs to God. However it appears to us, He is making her beautiful, and she remains the body of Christ.

Stop Taking Sides: How Holding Truths in Tension Saves Us From Anxiety and Outrage

In WORLD’s political coverage this fall, we’ve commended this book from Boston Pastor Adam Mabry. He says Christians should care about elections, but they should also “trust Jesus, receive peace, and refuse the anxiety that betrays an innate political idolatry.” That’s helpful counsel, but Mabry’s book is about more than politics. He explores how Christians can defend the truth while leaning into other mysterious tensions God ordains—including how He works strength in weakness: “Power tries to control a world it can’t keep. Ungodly weakness is controlled by a world with no lasting power. But meekness is God’s power in the world, and the path to humbly enjoying power in the world to come.”

Mercy for Today: A Daily Prayer From Psalm 51

Jonathan Parnell used to think of Psalm 51 as a sort of trump card to throw down after he sinned. King David’s famous prayer of repentance after his infamous fall served as a sort of “out” for Parnell’s own failures. In Mercy for Today, the Minnesota pastor explains how his view shifted: The key was understanding that what David needed in his worst moment is “what I need all the time.” Repentance itself is a gift from God that leads us to realize our whole lives—not just our worst moments—are all under His mercy. Parnell summarizes David’s prayer that God would open his mouth to declare His praise: “God, let me get in on your praise, come what may.”

This page is part of WORLD’s 2020 Books of the Year section. Next: Accessible Science.