Hanging on to hope

Journey to America by Sonia Levitin: Berlin in 1938 is a dangerous place for Jews, so Lisa’s father decides to sneak away at night and head to America: When he finds a job, he will send for his family. That takes longer than he expects, but finally the time comes. The family takes a train to Switzerland, supposedly for vacation. Mother and three daughters face many trials, made worse by the mother’s serious illness. Levitin shows the dangers families faced even after leaving Germany—and the courage and hope it took to persevere. (Ages 12 & up)

The Endless Steppe by Esther Hautzig: The daughter of a wealthy jeweler in Vilna, Poland, Esther Hautzig had a fairy-tale childhood. Even after the Russians came and confiscated her father’s business, her life remained the same. In 1941, when she was 10, the Russians exiled her family to Siberia. With the eyes of a child she experienced the hardship—hunger, exhaustion, isolation, bone-chilling cold—and also the wonder of this strange place. Until the end of the war, her family struggles to survive with courage and hope. Hautzig’s depictions of people and places are rich in detail. (Ages 12 & up)

Letters From Rifka by Karen Hesse: Two decades before World War II, Rifka’s family left Russia by train to escape pogroms and emigrate to America. The family came down with typhoid in Poland, which caused delays. Then Rifka developed ringworm, which meant she couldn’t board the ship. Instead her parents left her in the care of the Hebrew Immigrant Aid Society to get better. This novel, based on a true story, unfolds through letters that recount Rifka’s experiences as she waits and wonders if she will ever see her parents again. (Ages 12 & up)

The Upstairs Room by Johanna Reiss: Reiss writes at the beginning of this book about her experience living in hiding in Holland during the war: “My sister and I suffered and complained, and sometimes found fault with the Gentile family that took us in for a few years, in which members of that family were not heroes but people, with strengths and weaknesses.” Because she does that so well, capturing the individual personalities, they all come alive. She juxtaposes accounts of silliness with acts of bravery and kindness. The Gentile farmer, Johan, sometimes uses crude language. (Ages 12 & up) 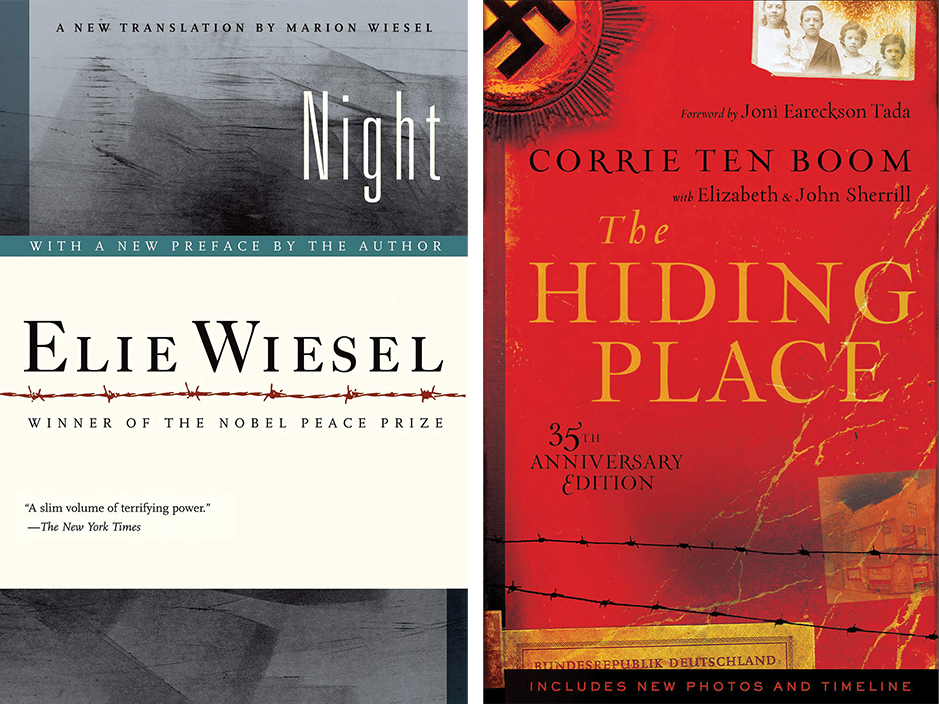 Some depictions of the Holocaust are bleak and tend to despair. Night by Elie Wiesel is one of those. He wrote of his experience in a Nazi concentration camp where he lost his faith. God seemed absent. A fellow prisoner captured the despair: “I have more faith in Hitler than in anyone else. He alone has kept his promises, all his promises, to the Jewish people.” Forty years later Wiesel spoke of dissidents and others suffering in various ways: “One person of integrity can make a difference, a difference of life and death.” He dedicated his life to being that person.

Mature teens should read Wiesel, but books like his should be balanced with others like Corrie ten Boom’s The Hiding Place. It too recounts time in a concentration camp, where her sister died. Both depict the horrors of the camps. Because she sees God at work, the book offers hope in the darkness. —S.O.