Tension in the Taiwan Strait

Lee Meng-chu, a Taiwanese man who has been in Chinese custody for more than a year, appeared on Chinese state television earlier this month to offer a “confession”: He stated he had illegally filmed military exercises in Shenzhen. Chinese officials accuse Lee, an electronics trader, of endangering China’s national security.

With close-cropped hair and a red vest with his prison number, Lee said he used his phone to record videos and take photos of Chinese military police as they practiced maneuvers with armored vehicles at a stadium in Shenzhen, the city just across the border from Hong Kong. At the time, many speculated these military police were preparing to invade Hong Kong, where pro-democracy protests had roiled the streets for months.

“I am sorry,” Lee said in the video. “I did many bad, wrong things in the past, perhaps harming the motherland and the country.” Chinese authorities are known to force prisoners to give pre-trial confessions—often under threats and torture—which are then broadcast on state-controlled media.

The televised confession comes as the relationship between China and Taiwan grows increasingly tense. The democratic island has stoked Beijing’s ire by drawing closer to the United States, most recently by welcoming visits from two high-level U.S. officials: Secretary of Health and Human Services Alex Azar and Under Secretary of State Keith Krach. Reuters reported the United States also plans to sell as many as seven major weapons systems to Taiwan, including mines, cruise missiles, and drones. 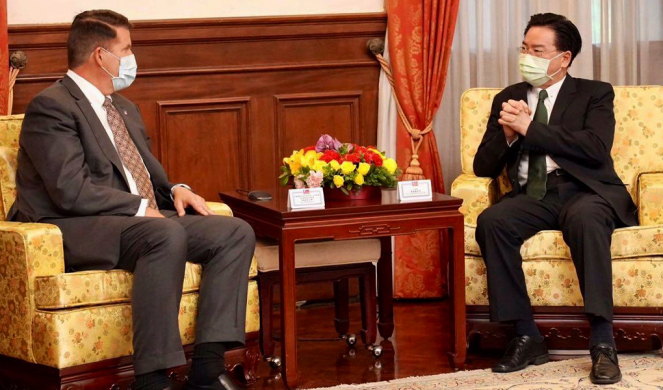 During Krach’s September visit, China’s military sent 18 fighter jets and bombers into the Taiwan Strait as a warning. “Those who play with fire are bound to get burned,” said Senior Col. Ren Guoqiang, a spokesman for the Chinese Ministry of National Defense. In the past, Chinese aircraft would cross the midline of the Taiwan Strait in pairs. This time, they came in much larger numbers from multiple directions.

Taiwan said in October that its fighters had warded off Chinese warplanes more than 4,100 times so far this year, up 129 percent from all of 2019. Taiwan’s navy has been dispatched more than 7,500 times, compared with less than 6,000 last year.

“Faced with Chinese communists’ saber-rattling and intimidations ... we should demonstrate our belief not to yield an inch of our territory and sovereignty,” said President Tsai Ing-wen during an air force base inspection in October.

Beyond Taiwan’s growing closeness to the United States, Tsai has also angered Beijing by openly supporting Hong Kong’s pro-democracy activists and welcoming them to Taiwan. Although Taiwan does not have a refugee law, it opened an office in July to help Hong Kong citizens apply for residency after Chinese Communist leaders imposed a restrictive national security law on the city. Taiwan granted residency to nearly 6,000 Hong Kongers last year and to nearly 4,000 in the first seven months of 2020. 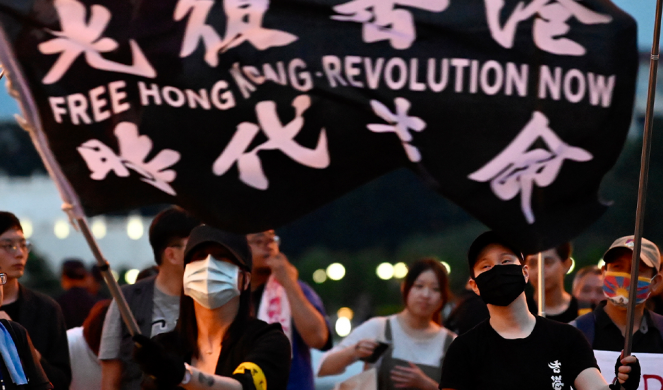 A demonstrator waves a flag during a rally to show support for Hong Kong pro-democracy protests in Taipei. SAM YEH/AFP via Getty Images

Some desperate Hong Kongers have even tried to flee to Taiwan by speedboat. On Aug. 23, the Chinese coast guard caught 12 young Hong Kongers, ranging in age from 17 to 33, on a speedboat headed to the island. Chinese authorities arrested the 12—most of whom were involved in Hong Kong’s pro-democracy protests and risked arrest in the city—and placed them in a detention center in Shenzhen. Chinese officials accuse 10 of illegal border crossing, which carries a one-year prison sentence, and accuse two of organizing the escape, which could carry a longer sentence.

The 12 Hong Kongers are unable to contact their families and are barred from returning to Hong Kong to face trial in its British-style courts. Their family members protested outside the Chinese government’s office in Hong Kong, urging authorities to allow independent human rights lawyers meet with the detained. Instead officials would only allow recommended lawyers from a government list to represent them.

That a boatful of Hong Kongers would flee to Taiwan is ironic: After the Communist party takeover of China in 1949, hundreds of thousands of people swam or paddled on makeshift boats from mainland China to the British colony of Hong Kong for a taste of freedom. Many did not make it, shot by border guards or arrested and sent to labor camps. Others drowned or were attacked by sharks, according to The Guardian. Yet today the Hong Kong is no longer a safe haven for those who dare oppose the Chinese government.

During an Oct. 10 speech, Tsai noted the concern that countries in the region have over Beijing’s expanding dominance. “We will not act rashly, and will uphold our principles,” Tsai said. “We are committed to upholding cross-strait stability, but this is not something Taiwan can shoulder alone; it is the joint responsibility of both sides.”