Rediscovering a critical year in the U.S. fight against Nazism

Accessible History Book of the Year

The Year of Peril: America in 1942 is our history winner in another year of peril, 2020. Although I know the end of the 1942 story, author Tracy Campbell made me feel I was reading a novel in which it wasn’t clear that the hero would survive. It’s hard for us to believe now, but in 1942 War Production Board chairman Donald Nelson had good reason to say, “The awful realization was slowly coming over the country that America was losing a war.”

The religiosity of President Franklin Roosevelt’s messages, which would not pass muster with liberal pundits today, accentuated the urgency. In his January State of the Union speech he said a German victory would mean that “the Holy Bible and the Cross of Mercy would be replaced by Mein Kampf and the swastika and the naked sword.” At a press conference on Feb. 17 he said Hitler’s forces might bomb New York or Detroit at any time, maybe even “tomorrow night.”

Big media echoed that concern. Time on Feb. 23 reported on “the worst week of the century” where the “fate of the nation” was up for grabs. Life proclaimed 1942 “the critical year in the existence of the United States.” Three out of 10 Americans hoped for a negotiated settlement with Hitler.

Historian Allan Nevins complained: “Do we have sufficient unity of the … kind that will enable farmers, workers, capitalists, and professional groups to work together?” If groups do not endorse shared sacrifice, he said, “we shall have that equality of sacrifice seen in Poland, Greece, and occupied France—where everybody has lost practically everything.”

Philip Wylie’s best-selling Generation of Vipers said American high schools “teach nothing but gibberish” due to the “pee wee caliber of teachers” within an educational system that was “a public swindle, an assassination of sanity.” Recruits did not have basic math skills, and 82 percent of colleges and universities did not require students to take a course in U.S. history. Pollsters asked, “Do you think some form of socialism would be a good thing or a bad thing for our country as a whole?” One-fourth of Americans said “good,” and 34 percent more said they did not know.

Author Campbell has an eye for ironies. President Roosevelt declared tobacco an essential wartime material. Julep cigarettes advertised their “miracle mint” that “freshens your mouth at every puff. Even if you chain-smoke, your mouth feels clean, sparkling all day long.” Henry Ford and IBM head Thomas Watson waved the flag because they had much to atone for: The German army went to war riding more than 350,000 Ford trucks, and the German government tracked down Jewish citizens using punch card machines manufactured by IBM’s German subsidiary.

Anticipating our recent national debate about letting businesses but not churches open, pastors complained that traveling salesmen but not clergy received gas rationing exemptions: Rev. Dallas Billington of Akron said the lack of an exemption showed “that we as a nation do not put God first.”

Others feared gas rationing would lead to social isolation, but one sociologist said it was beneficial since “mother and dad are going to get to know one another much better by being forced to spend more evenings at home together, while daughter and son, unable to use the family car for dates, will have to devote more of their evenings with their friends in their respective homes.”

And Congressional Resolution 303 goofed when it described the proper way to salute the flag: “extending the right hand, palm upward, toward the flag.” People said that resembled the Nazi salute, so six months later Congress amended the resolution and asked civilians to place “the right hand over the heart.” 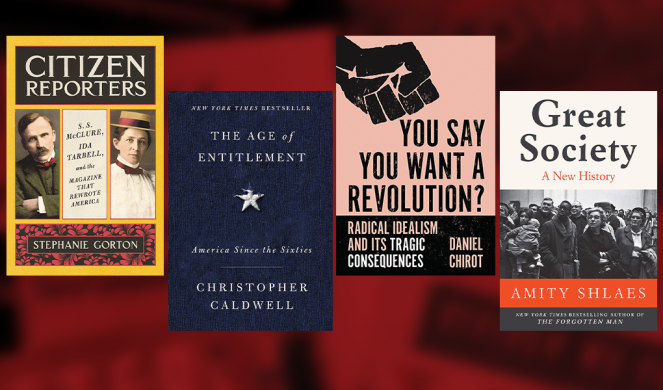 Stephanie Gorton shows how early 20th-century reporters like Ida Tarbell and Willa Cather captured the imagination of McClure’s Magazine’s 400,000 readers and the nation as a whole. Even the subjects of investigative stories often wanted to be known and photographed: “Click! Click! Click! … Everybody posing, smirking, attitudinizing!” An unamused President Theodore Roosevelt attacked “muckrakers,” but young McClure’s reporters continued researching, reporting, and drawing attention to arrogance in big business and big government. Editor S.S. McClure sometimes confused but also inspired his staffers: As Cather put it, “You often thought them a little more able than they really were, but those who had any stuff in them at all tried to be as good as you thought them, to come up to your expectations.”

The Age of Entitlement: America Since the Sixties

Christopher Caldwell details the impact of two 1960s laws based in an understanding that all are created in God’s image: the Civil Rights Act and the Immigration and Nationality Act. Both had unintended consequences. Legislation first designed to help the descendants of slaves expanded to include women and then LGBT individuals. An immigration bill seen as minor—Ted Kennedy said “the ethnic mix of this country will not be upset”—opened the United States to immigration from Latin America and Asia. Caldwell then explains insightfully how the 1960s revolution affected sex, war, debt, and diversity and created winners and losers, particularly white males who fell asleep thinking of themselves in charge “and woke up to find themselves occupying the bottom rung of an official hierarchy of races.”

You Say You Want a Revolution? Radical Idealism and Its Tragic Consequences

Professor of Russian and Eurasian studies Daniel Chirot takes us through the Russian, German, Iranian, and Chinese revolutions, with a detour to Mexico as well, and shows why they all became bloody tragedies. My Q&A with Chirot is on page 32: Please read that to learn of the lessons we can draw from revolutionary failure and the slow-down message history provides to those who scorn moderation and compromise. Chirot writes, “The great revolutions … sidelined and typically purged the first wave of more moderate revolutionaries.” Radicals come to power when “old regime incompetence creates chaos” and “liberals fail to quiet discontent.” Chirot’s concluding note: “If you want a revolution, beware of how it might turn out, because you might one day rue the one you get.”

Amity Shlaes shows how the failure of 1960s suite-level planning has led to current economic and racial tensions—and our hard experience suggests that today’s top-down programs won’t do any better. She starts with the early 1960s’ most-watched television series, Bonanza, and concludes with the demolition in St. Louis of the Pruitt-Igoe housing project, which became a symbol of Great Society failure. On the way she deftly and delightfully profiles leaders of the era like union head Walter Reuther, young radical Tom Hayden, and economics ear-whisperer Arthur Burns. Note: Great Society came out late in 2019, but since our Books of the Year issues go to press in November, we sometimes include end-of-the-year books in the following year’s lists. Please read a bonus Q&A with Amity Shlaes at this link.

This page is part of WORLD’s 2020 Books of the Year section.