Michael Behe, a 67-year-old biochemistry professor who has taught at Lehigh University since 1985, has helped to create nine children and two major theories.

His first book, Darwin’s Black Box, focused on “irreducible complexity,” the idea that major evolutionary change requires dozens of small changes to happen all at the same time, an event so statistically improbable as to be virtually impossible.

Behe’s explanation: “The heyday of Darwin’s theory took place in the absence of answers to very basic biological questions such as, among others: What is the nature of a gene? Exactly how is genetic information physically passed to an offspring? Beginning in the 1940s with the discovery that DNA—not protein or something else—is the genetic material, experimental work progressively uncovered more and more basic facts of molecular biology.”

To learn those facts, Behe explains, scientists need to “examine huge numbers of organisms over many generations. … Only in the past twenty years have such detailed, rigorous evolutionary studies even begun to be conducted. … [Now] we are in a much stronger position to judge Darwin’s theories based on sound experiments, not blinkered postulates.”

Darwin Devolves is our Science Book of the Year because its message to standard issue Neo-Darwinists is, to quote the book of Daniel, “Mene, Mene, Tekel, and Parsin”: Conventional evolutionary theory is being weighed in the scientific balance and found wanting. It will be overthrown. Here are excerpts from J.C. Derrick’s interview of Michael Behe:

You start Darwin Devolves by comparing the study of economics and biology—two disciplines most people would not associate. What are the parallels? The most significant is complexity. In economics, lots of factors affect the sale and trade of goods: supply, demand, taxes, people’s education, all sorts of things. Economists are highly motivated to explore their subject because it involves money and people’s welfare, and yet economics is not an exact science. Their predictions are not always reliable.

Just educated guesses. And economists have it easier than evolutionary biologists do. Economists don’t try to account for the origin of the goods that they trade. Evolutionary biologists explicitly claim that not only can they explain how something fits into an environment, but they say, “We can account for the origin of that, too.” The claims are well beyond what they can honestly make.

Yet they present their findings as irrefutable facts. Why? An idea takes hold in an academic community and never lets go. Darwin proposed the idea that animal variety may be because an animal is born with some helpful trait, and that trait would spread in the population—and that might account for new kinds of animals. That sounded plausible in 1859, but in 1859 we knew virtually nothing about the cell, molecules, and the complexity of life. Nonetheless, the idea took hold that science could explain everything.

And Darwinism was the answer? Most scientists in Darwin’s day didn’t think his mechanism was the answer, but they liked the idea that science can account for this—keep those theologians out of it. Then over time, the underlying science radically changed. We learned about DNA and the genetic code and protein machinery and more—but there was intellectual inertia. People said, “No, Darwin’s still got this covered.” It’s become less and less and less plausible.

In the book you cite “devastating new evidence” that has cast new doubts on neo-Darwinism. What did you find? We’ve known for a while that Darwin’s mechanism does work: We’ve seen organisms born that do better in an environment. But until recently, it was hard to track down exactly what the mutations were to see what was underlying the biological change. Now we can do that, and it turns out the helpful mutations overwhelmingly break or degrade preexisting genes. They’re not making new genes or making new connections between genes. They’re just throwing things away.

And that’s a problem? Here’s an analogy: Suppose your life depended on your car getting a little bit better gas mileage. Now, how could you quickly improve that and save your life? You could throw out the spare tire, take off the doors and backseat—throw them all away to lighten the load. You’ll get a little bit better gas mileage. Of course, those things are helpful in other circumstances, but if your life depended on better gas mileage, that’s the way to go. And Darwinism does that, too. If there’s any advantage in getting rid of something, then natural selection and random mutation will get rid of it without a moment’s thought, because they can’t think.

You also looked at the development of dogs. Popularizers of evolution said if we can breed dogs that are so different from each other and only do it in the past few hundred years, how much better could nature do? But again, we didn’t know what was going on in the biology of these dogs. In the past 10 years, the entire genomes of many different dog breeds have been sequenced. And again, it turns out if you want a Chihuahua, you can break one of the genes involved in growth. If you want French poodles with curly hair, you break a gene involved in hair growth. If you want a dog with a short muzzle, you break a gene involved in facial shape development.

How does time play into all of this? Neo-Darwinists seem to believe that with enough time anything is possible. Over long periods of time the only thing you would expect is more degradation, because degrading processes in biology are far faster than constructive ones.

Was there ever evidence that random mutations could create? The best “evidence” for natural selection: My professor in graduate school said it happened. He can’t be wrong. And everybody nods in agreement. But there was zero real evidence that Darwin’s mechanism could build anything complex. When people saw a mutation that helped, they confused beneficial mutations with constructive mutations.

Like with dogs and polar bears. Right. In the absence of science’s ability to track down those mutations at the molecular level—which is where the rubber meets the road in biology—people assumed. But there was never any such evidence. 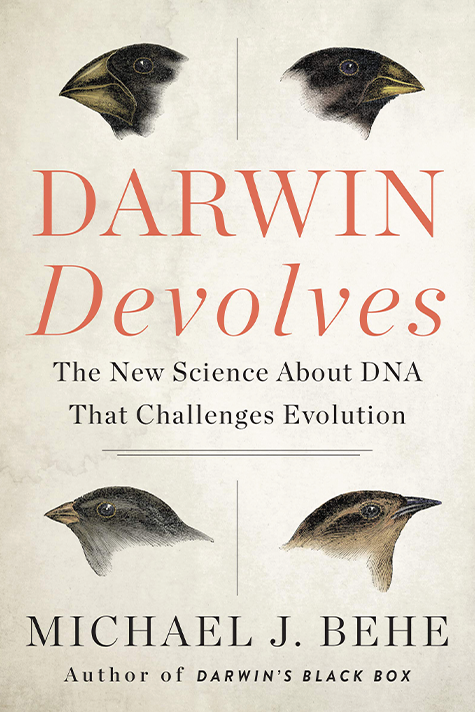 SCIENCE BOOK OF THE YEAR

Darwin Devolves: The New Science About DNA That Challenges Evolution

Two decades ago, in Darwin’s Black Box, Michael Behe flipped the conventional understanding that the evolutionary battle is one of science vs. faith: He showed scientifically that macroevolution is a satisfactory explanation only for those who are true believers in the words of a 19th-century prophet. Now, Behe highlights new scientific discoveries that show how Darwin’s mechanism works by breaking down genes: devolution, not evolution. Darwin Devolves is our Science Book of the Year because it shows that the evolutionary process can build or create nothing at the genetic level, but it can make a creature look different.

Fearfully and Wonderfully: The Marvel of Bearing God’s Image

Three decades ago wordsmith Philip Yancey turned theological reflections by Dr. Paul Brand, an innovator in treating leprosy, into two short books. Now, IVP has combined the two into one book. Brand brilliantly describes how human traits decried by evolutionists—why does God have us feel so much pain?—are actually lifesavers. For example, he explains how blood is a cleansing agent in the body and notes that “wearers of contact lenses might wish for less sensitivity in the eye, but the sensitivity benefits the great majority of people and their need to preserve vision.”

Foresight: How the Chemistry of Life Reveals Planning and Purpose

Marcos Eberlin, a member of the Brazilian Academy of Sciences, does not always provide explanations that are clear for nonscientists, but his book Foresight is valuable for its numerous examples of how structures in the natural world reflect engineering solutions more sophisticated than the best human engineers could provide. Eberlin concludes, “There are no demonstrated examples of unguided, mindless processes anticipating and solving problems that require a sophisticated orchestration of fine-tuned parts. … Intelligent design thus represents the best and, indeed, the only causally adequate explanation.”

Rethinking Radiometric Dating: Evidence for a Young Earth From a Nuclear Physicist

Vernon Cupps contends that current radioisotope dating models depend upon constant decay rates—but decay rates can be as much as 1 billion times faster under extreme conditions. He examines many dating modes—argon, alkali metal, rubidium-strontium, rare-earth, heavy metal, thermoluminescence, etc.—and shows they all depend on unverifiable assumptions. Cupps compares radioactive decay to dropping salt into a large jar of water: At room temperature the salt will slowly diffuse throughout the water, but cooling or heating the water changes the diffusion rate. His bottom line: think of the earth’s age in thousands of years, not billions.

Should we put our faith in human enhancement? We all hope for breakthroughs against debilitating diseases, but biotechnology has become an alternative faith for some: Imagine there’s no heaven, and instead let’s design babies, extend our lives past 120 years, and meld humans and machines to gain superhero abilities. Transhumanism is the ultimate techno-faith, one that “plays an eschatological role for people who embrace an atheistic, materialistic worldview [and] stands as a competitor to the gospel.”

Books for evangelicals abound on how to talk with Muslims, Latter-day Saints, and atheists, but not much is out there from a Biblical perspective about neuroprosthetics, brain-computer interfaces, a cybernetics future, human enhancement, transhumanism, and artificial intelligence. Humans 2.0 authors Fazale Rana and Kenneth Samples sometimes sit too high on the ladder of abstraction, but their book is a good start at laying out the parameters of the problem.

This page is part of this issue’s 2019 Books of the Year section. Next: “Curving heavenward.”