It’s so simple, it’s brilliant: The Christian life is shaped like a capital J. You descend on the left and rise on the right.

Our Book of the Year in Accessible Theology—readable by everyone, not just seminary professors—is Paul Miller’s J-Curve: Dying and Rising With Jesus in Everyday Life. The idea that Christians need to go down to come up challenges prosperity gospel sponge cake—and it’s just what we need to understand when times get tough. Not just once but again and again, the everyday Christian life is dying to convenience, worldly success, and approval, only to be resurrected into repentance, humility, and hope.

Miller grew up on the West Coast. He moved east when his dad Jack Miller began teaching at Westminster Theological Seminary in Philadelphia. After years as a teacher and principal at inner-city Christian schools in Philadelphia, Miller in 1999 founded and became executive director of seeJesus, a global discipleship mission. His parenting, teaching, and discipling experience helped him see that Jesus serves us so we can serve others.

Understanding the J-Curve makes all the difference when we miss a flight connection, fail to soothe a crying baby, or strike out when trying to help a homeless person: As Miller writes, “If rising is embedded in dying, then not running from the customized dying that God permits in our lives is essential for resurrection.” Understanding the J-Curve helps us persevere. Here are excerpts from our interview:

Say you’re faced with a difficult marriage or a difficult child, a painful situation you can’t control—you’re trapped and there’s no good exit. How do you survive? With the map of the J-Curve. Instead of saying to ourselves “everything has gone wrong,” we realize we’re in the story of Jesus now. My Father has given me this story. It’s unjust. It’s a suffering J-Curve. So we go back to Philippians 2, where Paul explains that Jesus did not count equality with God the Father a thing to be grasped. He emptied Himself, taking the form of a slave. Jesus descends into the problem. That’s the love J-Curve. Those two curves are always linked like that: A love J-Curve leads to a suffering J-Curve.

You write about the repentance J-Curve, when you’ve caused pain and need to kill the evil in yourself. But how would you kill something like pornography use, which is so common? Our desire for love is misdirected into pornography, often because users have not learned to cultivate a real person. We have to, through God’s grace, kill that in ourselves. That’s the normal Christian life.

We need to see we’re hitting bottom, and that’s miserable—but it’s also part of the normal pattern of going down in order to come up, through God’s grace? That’s right. It’s helpful to know we don’t control the dying or the rising. I’ve had some long times when I was sure I was at the bottom. I could begin to see some hope coming, and then there was a trapdoor, and I went down again. Sometimes I’ve gone down a whole series of trapdoors and I keep thinking I’ve bottomed out.

You write about the young woman who has gone from being a Disney princess at age 5 to multiple sex partners but no lovers at age 25. She’s come to believe that life is pointless, meaningless, cruel. She’s on her way to loneliness and bitterness. The Disney story shows how our modern world has reversed the J-Curve. It takes Christian hope and secularizes it. What to say to her? First, enter that woman’s world. Help her to see there’s an entirely different way of doing life.

What about men who don’t commit? You write on page 131, “We instinctively sense that love will narrow our life. It is one reason so many young men are fearful of marriage.” Is it true that unless men narrow their lives to one woman, they will not mature? A lot of young Christian guys are sitting at the restaurant with a menu and not buying. At some point you need to land. You need to pick something. A lot of guys are either fearful to land, or because of their own struggles with sexual stuff, they’ve just kind of dulled their soul to desire.

How do suffering, love, and repentance work together? There’s a great example from Joni Eareckson Tada’s life. Her future’s taken away. Her boyfriend’s taken away. It’s a suffering J-Curve. It’s like she’s on a cross. Her life has narrowed: Suffering always narrows your life in some way. She finally begins to break out of it when her youth pastor introduces her to Philippians 3:10-11 and Philippians 1:29—“It has been granted to you that for the sake of Christ you should not only believe in him but also suffer for his sake.”

Each year 125,000 or so rapes are reported across the United States, and in 49 of every 50 rape cases the alleged assailant goes free. With an unjust conclusion, how would you help a young Christian rape victim apply J-Curve thinking to her suffering? First, I would enter into her suffering. That’s what Jesus does: the Philippians 2 J-Curve. You listen to them and hear their story, if they want to tell it. You don’t lecture them.

You become Jesus to that person, not one of Job’s comforters. That’s right. The prayer of the J-Curve on the dying side is the Hebrew lament. You turn toward God with what breaks your heart—what you don’t understand about this world.

Let me ask about an abnormal situation: When Corrie ten Boom hid Jews in her home, that was the love J-Curve. That began to cost her: That’s the suffering J-Curve. People rethink the love: I should never have done that or I wouldn’t be in this mess. People do that with marriage all the time. As they begin to enter into the suffering that comes with marriage or any close, committed relationship, they start thinking, “I made a mistake.” But if you know the map of the J-Curve, you know that suffering follows love. So Corrie enters into a fellowship of His suffering. Corrie came out of that camp having lost Betsy and her father. She came out a different person with a message of reconciliation, and she took that message all over the world.

‘‘Human history is one long declaration of independence from God, riddled with Towers of Babel, monuments to our pride. … As descendants of Adam, left to ourselves, all of us re-enact Adam’s story by living a life of self-seeking.”

‘‘With the borderland in view, we can revel in even fleeting joy, knowing this is a down payment on future joy, and embrace sadness. … If dying and rising with Christ is the new normal, then when we encounter dying, we don’t have to collapse or withdraw into ourselves.”

‘‘Our children by the millions are being seduced by a better version of the good. … In the public square, secular liberalism feels inclusive, compassionate, accepting, and nonjudgmental, while Christianity is portrayed as narrow, backward, uptight, and judgmental. … We must recover a vision of the beauty of Jesus and the beauty of those who emulate his life.”

‘‘The story of Jesus’s dying and rising isn’t just for us as individuals; it’s for the church as a whole.” 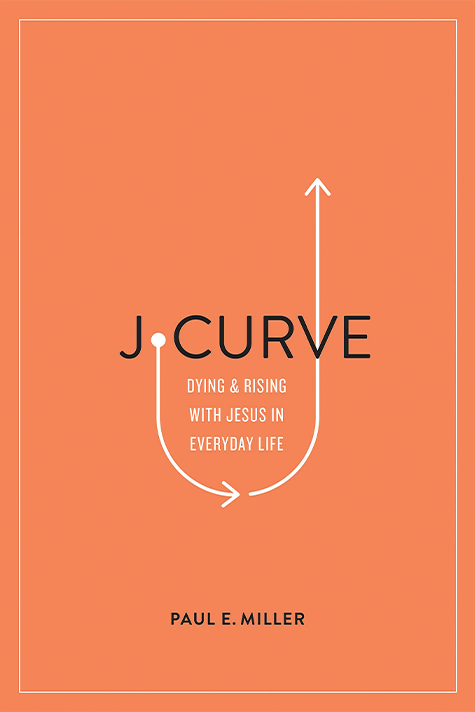 ACCESIBLE THEOLOGY BOOK OF THE YEAR

J-Curve: Dying and Rising With Jesus in Everyday Life

Paul Miller shows how the Bible teaches a pattern of dying and rising in the form of a J: We need to go down to come up. His message challenges the part of American evangelicalism that values winning and defines success much as the broader culture does, with adulation of celebrities and equation of suffering with failure. Miller shows through many examples that being born again often means the death of some previous ambitions, but the J-Curve is not a one-time experience: Miller calls the J-Curve “the spine of sanctification” and “dying and rising with Christ the normal Christian life.” —M.O.

Work: Its Purpose, Dignity, and Transformation

Christian authors have written about work for centuries, but Daniel Doriani offers a deep dive into Biblical theology and its practical applications. In a chapter that might become increasingly helpful, Doriani offers guidelines for Christian workers wrestling with whether to remain in a compromised organization or get out. He also offers Biblical principles for common questions like How long should I stay in a job I don’t like? (Maybe longer than you think.) Doriani’s vision of work remains hopeful: “Christians can do more than make a living or avoid sin. … Christ, the King, has come … his kingdom has arrived, even in our work.” —J.D.

Adorning the Dark: Thoughts on Community, Calling, and the Mystery of Making

Musician and author Andrew Peterson offers a poetic but practical look at how Christians can use the gifts God gives them to glorify Him and encourage others. Writers, artists, and musicians might find the book especially helpful, but it’s delightful for anyone craving to find or cultivate beauty in a broken world. Part creative memoir, Peterson’s book is realistic about the plain difficulty of hard work of any kind, but he also holds out the rewards: “Daily pledge every cell of every tool at your disposal to His good pleasure.” —J.D.

The Whole Armor of God: How Christ’s Victory Strengthens Us for Spiritual Warfare

Iain Duguid brings a fresh approach to a familiar passage in this book about spiritual warfare. Many Christians might think of Ephesians 6, where the Apostle Paul writes about putting on the whole armor of God to stand against the devil. Duguid also examines passages in the Old Testament to show how Christ has already worn the armor on our behalf. For example, “The breastplate of righteousness and the helmet of salvation come from the divine warrior’s arsenal in Isaiah 59:17.” Duguid reminds us: “What God clothes us with is nothing less than His own armor. … Jesus has Himself worn the armor and won the victory.” —J.D.

A Big Gospel in Small Places: Why Ministry in Forgotten Communities Matters

Stephen Witmer grew up in a very small town in Maine. Like many young pastors, he dreamed of pastoring a big, center-city church—where God could do significant work. He has found significance as a pastor in Pepperell, Mass. (pop. 11,497 in 2010). This book weaves together Witmer’s personal about-face and a theological vision for small-place ministry. He illustrates both bright and dark sides of small places, explores joys and temptations facing pastors called to rural areas, and challenges un-Biblical definitions of significance and strategy. Witmer, in an irenic way, counters arguments put forward by Christians who prioritize urban ministry: He shows the joys of embracing a big gospel and delighting in the small and seemingly insignificant. That makes its message applicable to just about anyone. —S.O.

This page is part of this issue’s 2019 Books of the Year section. Next: “Battles on La Rambla.”