Children’s Book of the Year: A fantastical memoir sheds spiritual light with literary might

“I am ugly and I speak funny. … But like you I was made carefully, by a God who loved what he saw.”

Daniel Nayeri (whose original, Persian name is Khosrou), begins Everything Sad Is Untrue (A True Story) by spinning legends, like Scheherazade of One Thousand and One Nights. She told stories to save her life, and perhaps Daniel’s motivation is not much different. “You’ve got my whole life in your hands”—you being us, the readers of this weird, disjointed, dreamlike, harsh, beautiful memoir with fictional elements and fantasy. Though born to a wealthy family in Iran, 12-year-old Daniel lives in a crummy house in Edmond, Okla., wearing thrift-shop clothes. His seventh grade classmates regard him as an oddity.

This abrupt reversal came because his mother, Sira, became a Christian while visiting family in London. Sira met Jesus and could not keep Him to herself upon returning to Iran. Tortured and fatwaed by the Islamist government, she had to flee for her life with Daniel and his sister Dina. They were homeless in Abu Dhabi before going to a refugee center in Italy, where Sira relentlessly badgered the U.S. Embassy for sanctuary. Married to a violent abuser (also Persian, and a professing Christian), she faithfully attends church, works a ­minimum-wage job, and protects her children.

All this happened to Nayeri, who now oversees an imprint of Macmillan Publishers. Everything Sad Is Untrue recently won the American Library Association’s Michael L. Printz Award for Excellence in Young Adult Literature. We chose it as our Book of the Year—spanning both the fiction and nonfiction categories—unanimously for its literary value as much as its content.

To bring his own story up to date: Nayeri has never returned to Iran because at age 18 he declared himself a Christian, and conversion is a capital crime there. But he remains close to his mother, who is happily remarried in Pennsylvania, where she writes and translates for various mission groups. “It’s a lovely place to have ended up after a story like hers,” he told me in an email.

He encourages young writers to “look back on their family stories and try to find the moments of inflection—the time a grandparent moved the whole family from one state to another, or a long-held home over generations, or a person who became the keeper or breaker of family traditions. These are great places to start digging.” Older generations have a responsibility to share stories, and younger generations are responsible for receiving them: “In the end, the shared story is the only connective tissue they have with one another, and I wish we had a stronger cultural emphasis on helping families strengthen those bonds … a shared story within a family gives children the benefit of learning from the parents’ successes and failures.”

The 12-year-old Daniel incorporates myth and legend into his memories, and the nonlinear style may confuse or even frustrate some readers at the beginning. Parents may recoil at some earthy content, such as the bloody slaughter of a bull in the opening chapter or extended observations on the very human phenomenon of eating and pooping. It’s a total immersion in clashing cultures, but persistence will pay off.

Nayeri would love to see Everything Sad become a reading selection for church book clubs and homeschool groups. To those wondering about the title, he offers this passage from The Brothers Karamazov, which appears as an epigraph in the book and parallels his own faith:

“… that in the world’s finale, at the moment of eternal harmony, something so precious will come to pass that it will suffice for all hearts, for the comforting of all resentments, for the atonement of all the crimes of humanity, for all the blood that they’ve shed; that it will make it not only possible to forgive but to justify all that has happened.” 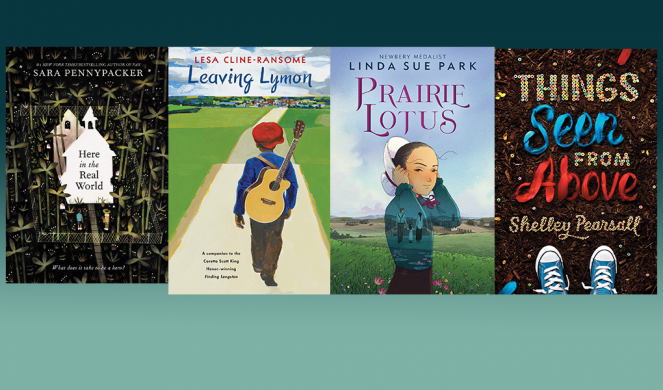 Here in the Real World by Sara Pennypacker

Eleven-year-old Ware was looking forward to summer vacation at his grandmother’s retirement village, hanging out at the pool and reading of knights and chivalry. But a sudden stroke puts her in rehab and Ware at the community center day care. Bye-bye, peaceful summer—until he meets a prickly girl named Jolene at the condemned church lot next door and becomes involved in an unlikely reclamation project. Christian imagery figures largely in this redemption story. Art is the active agent, not the Holy Spirit, whose day has presumably passed. But the creative spirit of the image of God remains. (Ages 10-14)

After Lymon’s father serves his time at Parchman Farm prison in Mississippi, Lymon hopes he will take to fathering. But Daddy is a musician first, so nightclub gigs take priority. After the boy’s beloved Grandpops dies and his contentious grandma succumbs to diabetes, no other option remains but big, noisy Chicago, where Lymon’s flighty mother has married a man who has no use for an extra kid. The heartbreak and trauma of Lymon’s abandonment are painful, but his faithful, prayerful aunt cares deeply for him. Daddy finally comes through, admitting, “Sometimes even grown folks got growing up to do.” (Ages 10-14)

Hanna Edmons, age 14, is a “half-breed.” Even in California she and her Chinese mother were oddities. But now that her widowed father hopes to start a retail business in Dakota Territory, Hanna must decide whether to stay out of sight or try to compel acceptance from provincial townspeople. Her deceased mother’s advice is crucial: “You stop thinking about yourself. … You do things for other people, it fills you up with good feelings, less room for bad ones.” Quiet determination wins Hanna a place in the community. (One scene involving an attempted assault may make the novel unsuitable for younger readers.) (Ages 12-15)

Things Seen from Above by Shelley Pearsall

After trying and failing to fit in with her fellow sixth graders during lunch period, April Boxler volunteers to monitor fourth grade recess. There she meets Joey Byrd, who occupies his own world and spends recess walking in circles, scuffing up gravel. Though sympathetic, April doesn’t understand what a “rare bird” Joey is until the school custodian shows her a breathtaking view from the roof: the striking patterns produced by Joey’s artful meandering. When his gifts draw unwelcome attention, April feels called to protect him, even though he may not need protection. Instead, Joey teaches her a wider perspective, “seen from above.” (Ages 10-14)

The committee also ­recommends Echo Mountain, a Depression-era novel of a girl discovering her healing gifts while living off the land. Orphan Eleven, set during the same time period, is the lively story of a band of outcasts running away to the ­circus. In The Time of Green Magic a blended family leases an ivy-­covered cottage where they learn to bond against a supernatural threat. And We Could Be Heroes pairs an autistic boy with an overzealous, hyperactive girl in a partnership that stretches and challenges both.

—The next story in the Children’s Books of the Year section is on WORLD’s picture book winner, Saving the Countryside.

Next time could you include the authors of the Honorable Mentions winners? I put We Could Be Heroes on hold at the library, and my 10 year old son has been reading it. I asked him tonight if the main character had autism and he said no, it's about adults with memory problems. Apparently NOT the same book mentioned above!