Beatrix and her books

Picture Book of the Year: An engaging and whimsical picture book illuminates the life of a beloved children’s author

WORLD’s Picture Book of the Year for 2020 is Saving the Countryside by Linda Elovitz Marshall, illustrated by Ilaria Urbinati (Little Bee Books).

Our committee looked for books that are beautiful (pleasing to the senses), engaging (appealing to children), and wise (Biblically objective). Saving the Countryside chronicles how Beatrix Potter (1866-1943) created not only the icon of children’s literature, Peter Rabbit, but a legacy extending beyond furry friends on the page. Potter’s real-life efforts to preserve England’s Lake District—and the farms and animals it hosts—defied Victorian conventions regarding a woman’s station.

Our committee looked for books that are beautiful, engaging, and wise.

Then her brother went to school. Beatrix realized that because she was a girl, she wouldn’t travel, attend college, or work. She stayed at home and perfected her eye and her art by sketching her pet bunny. She sent her drawings to a publisher—and he, believing she was a man, asked for more. Those drawings became greeting cards, and Potter began earning money.

When a young friend was sick in bed, Potter wrote and illustrated a story for him. Publishers were slow to accept The Tale of Peter Rabbit, so she published it herself and sold 250 copies. She reprinted it and sold more. Soon a publisher struck a deal with her, and Potter’s career took off.

Keen observers may note that Urbinati shows Potter on the dust jacket as a young lady sketching her pet bunny. Removing the book’s outer layer reveals an older Potter, proudly clutching one of her books. After reading Saving the Countryside, families acquainted with the Beatrix Potter treasury may wish to dust off their copies, while those who haven’t yet enjoyed those classic tales will likely find themselves wanting to explore the worlds of Benjamin Bunny, Jemima Puddle-Duck, and Tom Kitten.

Like Beatrix Potter’s classic tales, Saving the Countryside contains the ingredients of a literary feast: engaging illustrations, elements that appeal to readers and listeners of all ages, and a story families will delight in revisiting. (Ages 4-8) 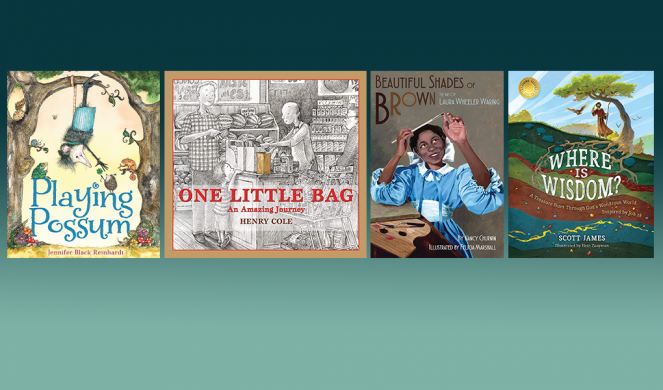 Alfred is a very nervous possum—and also lonely. The thought of making new friends triggers his possum reflex: He freezes up and plays dead. Alfred meets Sofia. She’s an armadillo who curls into a ball whenever she feels nervous. Knowing they have something in common helps Alfred unfreeze and Sofia unfurl. They discover other creatures who need “patience, a lot of understanding, and a little forgiveness” to push past their own fears. Reinhardt’s watercolor, ink, and pencil illustrations depict cheerful scenes and lots of details—including a shy chameleon who hides by blending in with his surroundings. (Ages 4-7) —Kristin Chapman

One Little Bag: An Amazing Journey by Henry Cole

A brown paper lunch bag takes an amazing journey from the forest, through the mill, to a store where a father and son carry it home filled with groceries. The wordless story follows the son as he grows up, reusing the bag at key events along the way. At story’s end, the now-adult son, his wife, and their young son plant a sapling in the bag to honor the grandfather who has died. Since there are no words, the pen-and-ink illustrations do double duty: They chronicle the life of a simple paper bag and celebrate family bonds, showcasing the ordinary moments that make up a well-lived life. (Ages 4-8) —Sandy Barwick

Brown was more than a color for Laura Wheeler Waring. It was an array of colors she strived to get just right when painting portraits of family members. She dreamed that one day her paintings would hang on museum walls so others could appreciate the beauty of brown. Waring’s determination helped her push past racial barriers and become an accomplished painter of many African Americans. Today, her artwork hangs in the National Portrait Gallery. Although the text is geared to older readers, Felicia Marshall’s lively illustrations drew our panelists’ younger children into the inspirational story. (Ages 6-10) —Mary Jackson

Where Is Wisdom? by Scott James

Scott James uses Job 28 as the basis for this picture book about wisdom. As in Job, the wisdom hunt is like a treasure hunt. Man naturally seeks out crops from the soil, silver, gold, and precious gems from deep in the earth. But there’s a greater treasure—wisdom—and God knows where He has hidden it: “God made all things and set them in their place. He knows right where each treasure is found. He sees everything under heaven and has never lost a thing.” Hein Zaayman’s illustrations borrow from animated movies and Bible cartoons to render abstract ideas—wisdom and treasure—clear and turns the search for them into an action-adventure story, which ends in Christ. (Ages 4-8) —Susan Olasky

Children’s book author and illustrator Mitsumasa Anno died on Dec. 24 at age 94. In 1984 he received the Hans Christian Andersen Medal, an international award for lifetime achievement in children’s literature.

Born in 1926, Anno grew up in western Japan. After serving in the Japanese military at the end of World War II, he traveled widely in Europe, where he learned about Dutch artist M.C. Escher, whose “fool-the-eye” style influenced Anno’s Alphabet and Mysterious Pictures.

Travel also gave Anno an appreciation for European history and culture. In the wordless Anno’s Journey, a lone character on horseback makes his way from one medieval town to another, passing tractors, trains, and donkey carts. Tucked amid the busy street scenes drawn in ink and watercolor are figures from Sesame Street, tableaus from famous paintings, and Little Red Riding Hood, among others. —Susan Olasky

—The next story in the Children’s Books of the Year section is on WORLD’s notable nonfiction picks.