GREENWOOD, Miss.—Our Hope Awards Southeast Region winner is Delta Streets Academy (DSA), a 5-year-old Christian school in Greenwood, Miss. You might wonder why: Hundreds of Christian schools exist south of the Mason-Dixon Line and east of the Mississippi. Some, born in the 1960s, are not five years but five decades old. So why spotlight a relative newcomer?

One reason: Some of those half-century-old Christian schools emerged while public schools desegregated. Some grew out of Christian belief but attained critical mass through a desire to have a new group of white-only institutions. The circumstances of their birth are not a reason to disown them, but they’ve contributed to a firm resolve among some younger white Christians to write a new chapter.

The author of Greenwood’s new educational chapter is Thomas McMillin Howard, 32. Known as T. Mac, he entered Mississippi State University in 2003 and spent the summer just before Hurricane Katrina teaching and tutoring at Desire Street Ministries in New Orleans, located in the poorest part of the city—the largely black and soon to be submerged 9th Ward. He read the Bible and wanted to help the poor.

In 2008 T. Mac moved to the largely poor Mississippi Delta and taught math at Greenwood High School, where he also coached baseball and was an assistant for football. Greenwood High is 98 percent black and the regular recipient of F grades from the state’s overseers of education. He found students there way behind and hindered by a lack of discipline. One-third were dropping out. Those who stuck around often arrived in classes 20 minutes late and suffered no consequences.

Mississippi state Sen. David Jordan, an 83-year-old African-American, gave me two years ago his view of Greenwood High: “Too much noise. Too little respect. Gotta have discipline. No substitute for it.” Jordan wrote in his memoir, From the Mississippi Cotton Fields to the State Senate, “Education is the only opportunity for black people’s advancement … they must learn to burn the midnight oil in order to obtain a good education.”

In 2012, T. Mac opened DSA with an immediate goal—get students burning some oil—and an ultimate one: “to equip the young men who walk through our doors daily with the gospel of Jesus Christ, and the skills needed to live a life that honors God.” DSA now has 55 students, all African-American males, in grades seven through 12.

One reason for going all-guy: T. Mac has seen that girls are more likely to do what’s expected of them, but boys are naturally wild. Some of the ways DSA tries to civilize boys: They must tuck in their shirts, complete homework, and act respectfully toward adults and each other. They have a mandatory study hall period during the day and access to tutors after hours. And DSA is reluctantly willing to lose students who refuse discipline.

The process seems to be working with junior Dominick Brown, who started in DSA as a seventh-grader and understands how he and others have come to “understand our responsibilities. Now he [T. Mac] can trust us to do stuff, when back then he couldn’t because we always got in trouble.” He’s heavily involved in the youth program at First Baptist Church, which houses DSA. Dominick’s favorite subjects are math and science, and he scored 24 on the math part of the ACT test, which puts him in the 74th percentile, better than 3 of every 4 test-takers. He hopes to be an orthopedic surgeon and to increase his Christian understanding.

It’s also working with senior Jaylin Smith, who has the highest GPA at DSA. He says he is “way better at math than I used to be,” and has changed from being stumped by equations to now being able to “spit those out without a problem.” Chemistry is his favorite subject: He recalls “counting valence electrons and understanding electron configuration.” This fall he’s going to Mississippi State on a full ride, having received multiple scholarships and grants. 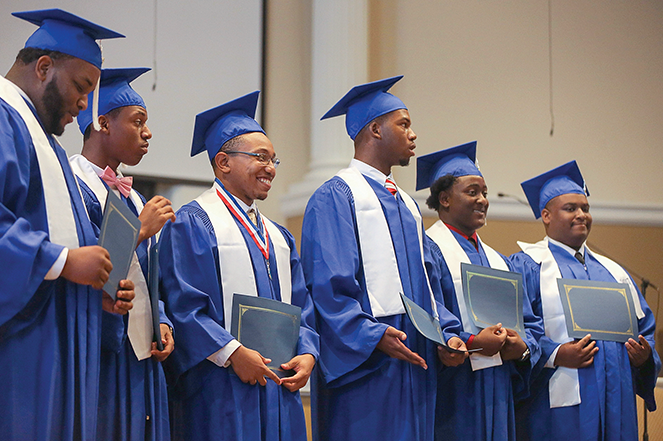 HUGE PROBLEMS REMAIN. Half of the African-Americans in Greenwood live below the official poverty line, many literally on the other side of the railroad tracks from white neighborhoods. One DSA teacher, Allen Wood Jr., recalled that on Valentine’s Day, when Wood reminded students to hug their mothers, a 10th-grader said he hadn’t hugged his mother since the fourth grade: Given their relationship, it hurt too much. Another had gone to jail for assaulting his mother’s boyfriend, who was assaulting his mother.

DSA students need to learn the basics and also believe they are part of a broader world and can live in it, if they choose. Teachers try to expand students’ vocabulary, often asking, “Who knows what this word means?” For example, most students had no idea what a “peer group” is, and they thought “enigma” had something to do with the “N” word. The Delta was the cradle of great blues musicians like B.B. King, but students often don’t know the history of the blues and jazz, let alone the music of Beethoven or Tchaikovsky.

Wood described his students as “tough, resilient, and smart. Teaching them is akin to pouring water on the desert: They soak up practically everything.” For example, young men usually put on coats and ties for their senior pictures at high school throughout the United States, but only one DSA student had worn a tie of any type at any time. None of the students owned a coat or suit. They had a keen interest in learning more about clothing, how to tie ties, etc., so Wood showed them videos about sartorial matters, and every student soon was able to tie a tie.

That was just the start. Memphis hovers over the Delta, and some tailor shops there had created a charitable organization, the “Memphis Suit Project.” MSP asked customers to donate “gently worn” suits that would be cleaned and sorted by sizes. MSP selected DSA as a recipient organization, measured the students, tailored the suits to those measurements, embroidered the students’ names into the coats, and then presented the suits—along with shirts, ties, belts, and shoes—at a special ceremony.

The Greenwood Commonwealth told that story on March 3, 2017, and quoted Dominick Brown, the ACT high scorer, saying his new suit “makes me feel great. I feel like I am being The Man. I can take any job I want to.” 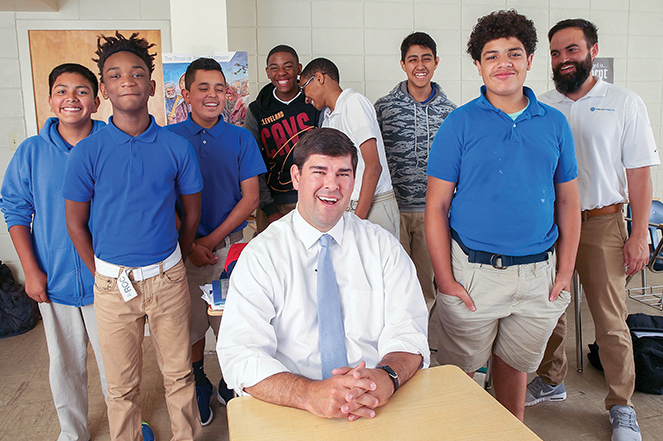 DSA HAS GAINED strong parental support, with many moms praising Howard. Deborah Harris, the mother of one of this year’s graduates, said, “Whenever there’s a concern about a student, T. Mac is always there for a one-on-one conversation. He’s very compassionate when it comes to his students and that makes me a proud parent to know that he cares.” T. Mac also knows the importance of sports in motivating students.

Tim Kalich, editor of The Greenwood Commonwealth, offered this summary: “Many people in this town are crazy about T. Mac.” Parents describe principal Jeanne DuBard and other teachers as loving, persistent, and dedicated. T. Mac, his wife Meagan, and their three children live in a predominantly African-American area of Greenwood.

Unlike CEOs who tout their successes, T. Mac is harder on himself than some of his fans are: “We still are trying to figure out about equipping and encouraging the guys’ effort in the classroom. Because we have an open enrollment, a majority of our students come in with very little excitement about learning or wanting to grow. … In a world where everything is at the tip of our fingertips, the idea of actually grinding out a problem or working hard for answers or to solve problems can be challenging.”

The difference between how DSA and Greenwood public schools encourage effort is huge. DSA had to dismiss one 10th-grader after a semester: He functioned at a fifth-grade level and Delta Streets is not equipped to provide remedial services that great. A DSA teacher saw the student in downtown Greenwood two months later and asked how he was doing. The student responded: “I love it. I’m making straight A’s!” That meant the school was following the general practice of social promotion and giving the student illusions of progress.

The unwillingness of DSA to play “let’s pretend” has won it broad community support, particularly among those who see, as local farmer Gary Dyksterhouse does, how “the educational disparity between those with financial means and those without is staggering.” Dyksterhouse contributes to DSA in part because he has seen “young men grow up without hope, without education, and predictably fall into hopeless endeavors. This pattern is reinforced in their children who in turn follow the same path. The cycle seems endless. I love Delta Streets because it is aimed at creating a new pattern.”

Next in this series on the 2017 Hope Awards: Northwest Region winner Hope Pregnancy Ministries