The story of one U.S. soldier and his interpreters illustrates heartbreak and opportunity in Afghanistan

Editor’s Note: WORLD has updated this story with an account from Ali after he arrived in the United States.

Between night shifts with the U.S. Army Reserves, Brad Lovin has been pushing a lot of paperwork. For the last several days he’s been trying to get one of the translators he worked with during a tour in Afghanistan—“James”—out of the country following the Taliban’s takeover this week.

Lovin worked with two Afghan translators in 2010 and 2011 who happen to be brothers-in-law: Ali and James (WORLD is using pseudonyms because of security threats). Ali, a U.S. citizen now, made it out of Kabul this week and back to the United States after one last trip to visit family. But hope for getting James out is dimming.

“There are soldiers who would go back and get their interpreter if the military would let them,” said Lovin before a night shift this week. “[Ali] would die for me, and I would do the same for him.”

Ali, speaking from the United States after his and his family’s evacuation, said: “I know that without him saying it … he is the closest person I have.”

Lovin worked with Ali primarily but also with James when Ali wasn’t available. Sometimes the three went out on missions together.  Ali said the three of them had been in many firefights against the Taliban together. Ali and James worked about the same length of time as translators, but James didn’t get a visa like Ali.

“I feel sorry for [James], he sacrificed a lot,” said Ali. “He was going out on missions, he was getting shot at, and right now he’s abandoned.” Ali said James also saved his kids from being crushed at the airport in Kabul as they tried to make it out.

James was in the application process for a special immigrant visa (SIV) in 2019 when the U.S. Embassy told him to come pick up his visa. But when James arrived, U.S. officials in Kabul told him they had denied his visa, according to Ali, and did not give a reason. He reapplied, but it’s not clear what’s happening since the embassy shutdown this week.

Ali and Lovin have been trying to help Jamies, “but we’re not getting anywhere so far,” said Ali. He said James had made it to a U.S. checkpoint at the airport multiple times, had touched the gate, but wasn’t allowed in because his visa is not yet approved. He showed recommendation letters from Lovin and explained that he was in the visa application process, but he needs official approval from the U.S. government.

Lovin applied for a P-2 visa for James, a visa for those who worked for U.S. programs but couldn’t get the SIV. But even if his visa came through, no one is sure if James and his family could make it out. James’ accounts to Lovin and Ali match news reports from Kabul: The Taliban control ways into the Kabul airport and are also going house to house searching for people like James. Ali said that the Taliban know James helped Americans.

“He’s in danger,” said Lovin. “This is, again, someone who’s put their life on the line, and almost lost their life a few times for our soldiers.”

Lovin and Ali built a close relationship during his deployment, where he was in charge of the defense of Camp Clark in eastern Afghanistan. Lovin trained Afghan soldiers and managed Afghan workers on the base. He remembers Ali telling him how he asked his wife to marry him and the details of their wedding. Lovin talked to Ali, a Muslim, about his faith in Jesus.

Ali began applying for the U.S. visa for interpreters years ago. When Lovin was leaving in 2011, Ali doubted he could make it to the United States. Lovin said he was going to pray that Ali would make it “so we can continue to have these conversations” about God. Lovin tried to “poke” the State Department process along when he got back.

Ali got approved and moved his family to Louisville, Ky., in 2014, where Lovin and his family lived.

“The first question I asked him was, ‘Did you remember that conversation we had before I left?’ And he said, ‘I think about it every day,’” Lovin recalled. “So I said to him, ‘I think God’s brought you here.’”

The Lovins were drawn into the Afghan community in Louisville through Ali. They ate meals together, played soccer, attended dinner parties where men sat in one section and women in another. Lovin’s kids became friends with Ali’s kids, and Lovin’s wife with Ali’s wife. Lovin now heads missions for the Illinois Baptist State Association, but his family went back to Louisville recently for Ali’s family’s Eid celebration. 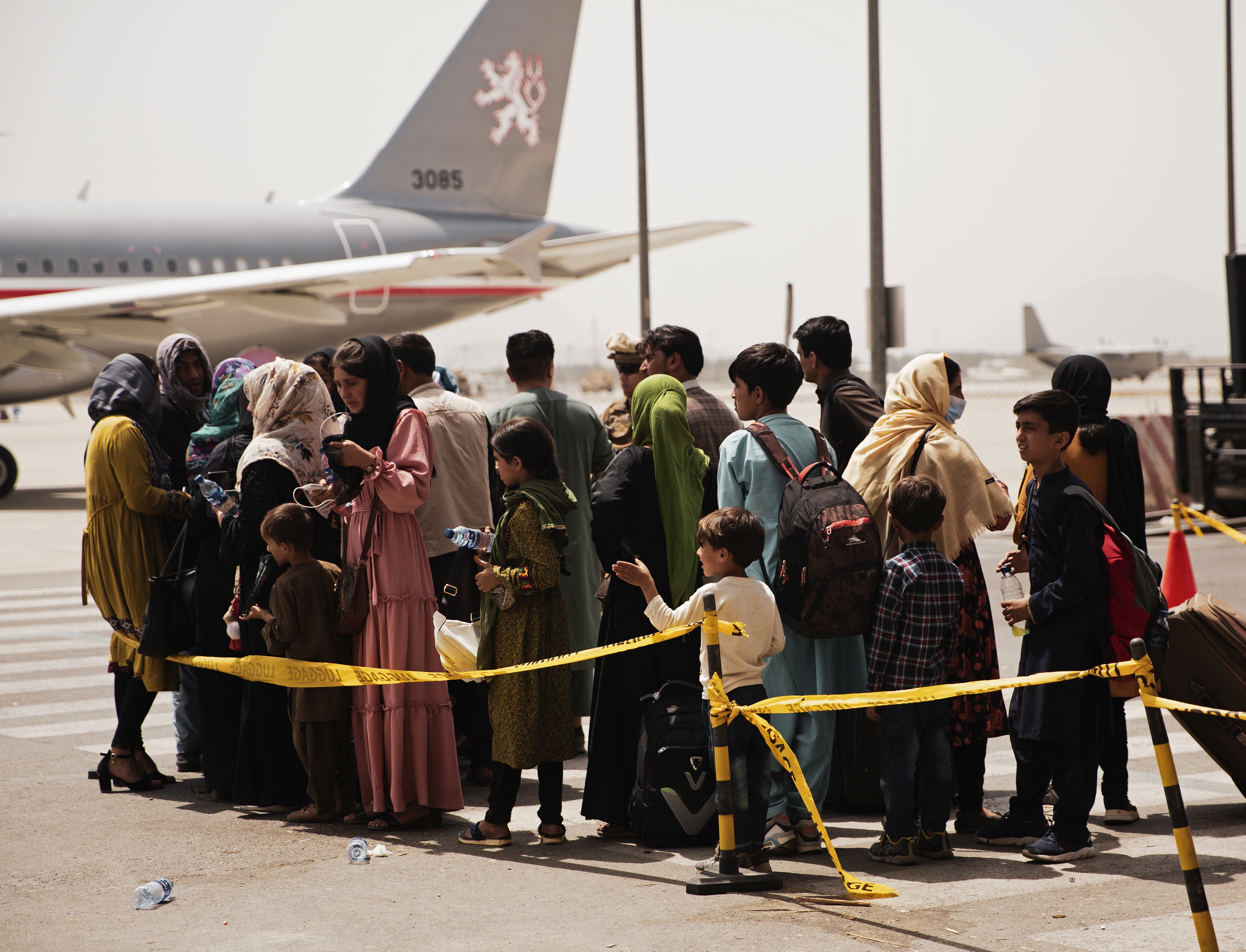 Civilians prepare to board a plane during an evacuation at Hamid Karzai International Airport in Kabul. Staff Sgt. Victor Mancilla/U.S. Marine Corps via AP

Ali became a U.S. citizen recently and had promised his wife that they would go back to see family in Afghanistan before the American withdrawal. They stayed in Kabul to be safe.

“They assumed that things would get really bad right after the U.S. pullout, but I don’t think they anticipated the country would begin to deteriorate before—because we’d already pulled everything to Kabul,” Lovin said. When Ali left for Afghanistan earlier this summer, “We were still at 90 percent strength there.”

Lovin, the former head of international security for Samaritan’s Purse, stayed in regular touch with Ali. As conditions deteriorated in the last two weeks, Lovin texted Ali to think about changing flights. They had a flight scheduled for Aug. 15, the day the Taliban took Kabul. They had to leave the airport as Taliban soldiers streamed into the city.

“You go into the airport with one government, and coming out after two hours it’s a different government and you’re scared for your life,” Ali said.

Ali and his family were walking to the airport when the Taliban fighters began streaming into the city. Lovin kept texting.

“He’s saying, ‘Taliban are everywhere. There’s checkpoints and then some gunfire,’” recalled Lovin. The Emirates flight they were supposed to get on was on track, then suddenly canceled. Ali and his family had to leave the airport. Lovin’s message to his friend: “We’re praying for you, you have a lot of people praying for you.”

Lovin told his wife and children that their friends might not make it back.

“It may have been the most trying time in my life,” said Lovin. “I mean, I’ve been in a lot of situations in combat, but I was really concerned and worried for him.”

Ali tried to return to the airport the next day with his brother-in-law James and his family. It was a “chaotic scene,” Lovin said, who was once again monitoring their progress by text and phone calls. Ali got separated from his wife and children at one point, then they finally all made it to the U.S. military checkpoint and got in—as U.S. citizens. They had to shed most of their belongings except for a couple of backpacks. The U.S. military did not allow James and his family in.

Children were passing out from the crush of the crowd. Ali got separated from his wife and five children at one point, but another family member brought two of the kids to the U.S. military checkpoints. For 12 hours they went back and forth trying to get to the checkpoint, pressing in and then leaving when the crush was too much for the children.

“This was the worst,” Ali said when I asked him about how it compared to being in combat. “I had kids with me. I’ve been with the Taliban in firefights many times. Hundreds of times. I had a weapon, I could save myself, I could shoot them. This time, all you could do is to watch. You just have to comply with what they say.”

“I told them, ‘He worked a couple of years.’” said Ali. “They said, ‘We will have another program for those people, but today we are only evacuating U.S. citizens and green card holders.’”

Ali and his family had to shed all their belongings except the clothes on their backs. The military gave his children big T-shirts to sleep in, but that was it for the next four days as they traveled.

Ali and his family made it on a C-17 and texted Lovin from Qatar. They landed in Washington, D.C., late Thursday, then drove from Washington, D.C., to their home in Louisville, Ky., Friday. Ali, now a truck driver, hadn’t slept for 30 hours.

“That emotional experience, I wish other people got to experience,” Lovin said of his friends being saved. “For us in a lot of ways, it’s what we experienced in salvation, right? We have that sense of hopelessness and fear. And then this complete opposite response of salvation.”

But James is still stuck: “The Taliban control everything.”

“They have to extend [the evacuation] until everybody that worked [for the Americans], every single person, makes it,” Ali said. “We should not leave them behind … especially those who sacrificed and bled for this country.”

Sharing Ali and James’ story gave Lovin’s church a “deep desire to respond,” which is new, and he hopes more American churches will see opportunities if thousands of Afghan refugees come to the United States or to other countries. He thinks about Afghans awaiting visas while in refugee camps in other countries as being a unique opportunity for churches to build relationships: “Regardless of where that family decides to settle, they could be connected to other Christians who might be there.”

Meanwhile, Lovin is processing the U.S. exit from a country he fought in. Like many veterans of Afghanistan I spoke to, he was not surprised at the Taliban’s speedy takeover. But it was hard to watch. He lost three men in his unit during his deployment and had to recover the body of a young soldier: “All those things stick with you, and you reexperienced those to a degree whenever you see these kinds of events unfolding.”

Ali was also heartbroken. Shortly before the American invasion in 2001, Taliban officials beat him for shaving his beard. That government was “like North Korea.”

“We have done a lot in the last 20 years,” Ali said. “And everything is gone in one week, especially for women.”

Lovin has lots of questions: “Why would this happen so quickly? And why would there be so many people that are going to suffer? And people that have lost their lives in defense of something better? Why, why would that happen?”

Still, he trusts God’s providence. “We do see the end in Revelation 5:9-10, when every tribe, tongue, and people is gathered around the throne. But we don’t see everything in between. And so I’ve learned that it’s best not for me to question God in my heart, and just to say, ‘I can’t wait to see what You’re going to do.’”