Chad Robichaux has five planes that each carry up to 500 passengers on standby overseas. They should be destined for the Kabul international airport to begin evacuations from Afghanistan. But the U.S. military—in charge of air travel since it took over air traffic control from Afghan authorities on Sunday night—won’t let them in.

Tracking Tuesday night into Wednesday showed a notable drop in transports in and out of the airport—the only legitimate exit from Afghanistan. Departing military aircraft designed to carry hundreds of passengers instead had fewer than 50. As a backlog of evacuees builds, so does tension—and danger.

Gunfire is increasingly frequent near the airport, say eyewitnesses, and security experts are warning of the potential for open conflict between Taliban fighters stationed there and the U.S. Marine contingent supervising evacuations.

At least 10,000 Americans remain in Afghanistan, along with other Westerners. Tens of thousands of Afghans also are desperate to escape Taliban rule. Many have exit documents and already have booked flights yet cannot access the only commercial airport in the country. The Taliban controls all but a few remote border areas. So the Kabul airport, which should be the relief valve in a chaotic and incomplete U.S. withdrawal, instead could become a flashpoint. 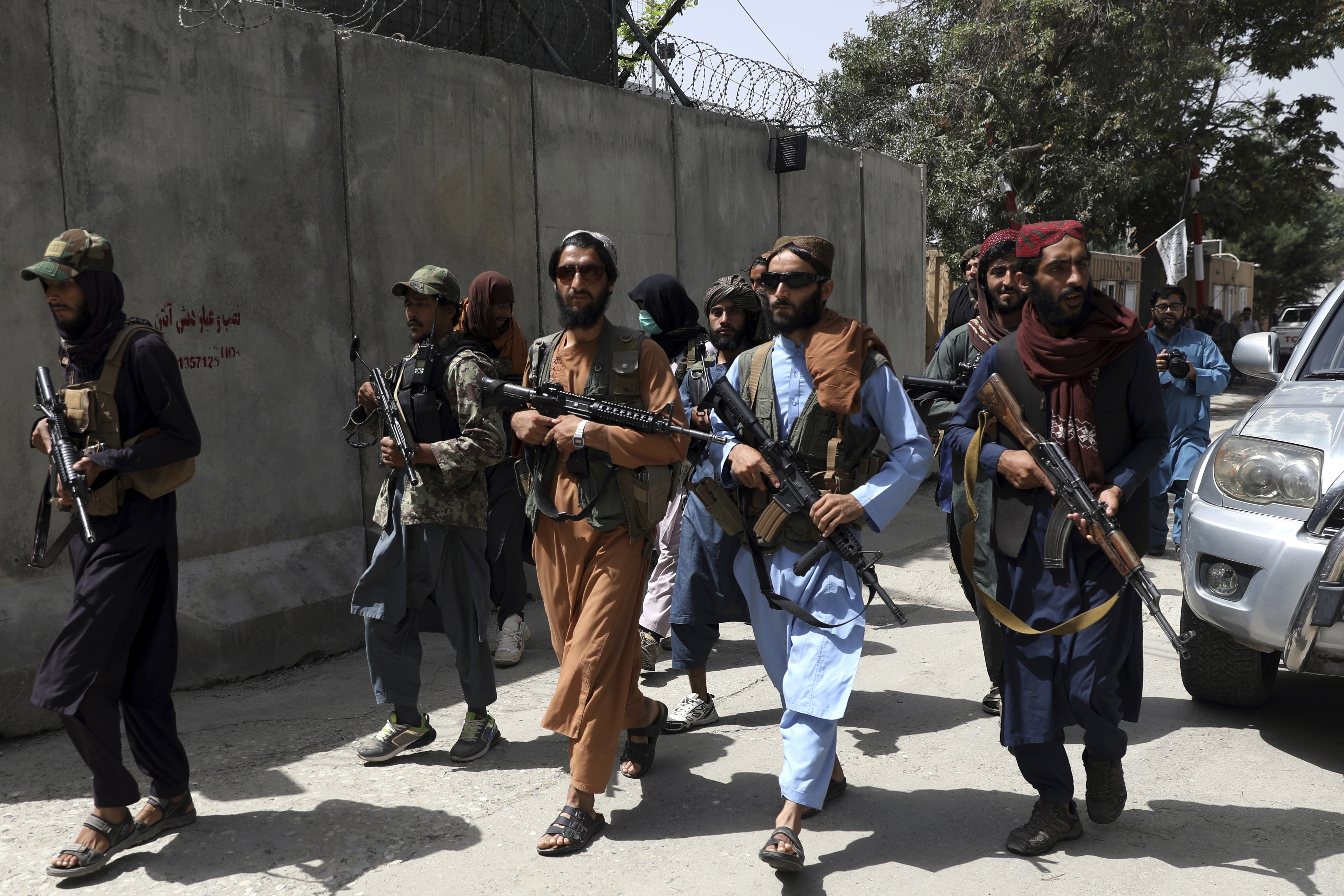 Robichaux, a former Marine with eight deployments to Afghanistan, said the United States’ decision to “confiscate” the airport is actually hampering the humanitarian operation. The Afghan War veteran—who served with the Joint Special Operations Command during his tours and wrote six books on his experiences—started the Mighty Oaks Foundation, a nonprofit working with veterans and active-duty military personnel.

Weeks ago, Robichaux and a team of mostly special ops veterans began working with U.S. officials to identify thousands of Afghans who had worked with the U.S. military and to prioritize them and their families for evacuation. “We have all the resources to do it,” he said, but communication with State Department officials broke down in the hours after the Taliban takeover on Sunday. Airlifts to evacuate more people are in place, he said, but the United States is blocking them: “The biggest obstacle we face right now is the U.S. military.”

On Wednesday the U.S. Embassy issued an alert advising American citizens the U.S. government cannot ensure safe passage to the airport. Space on evacuation flights, it said, is now available “on a first come, first serve basis.” That’s a departure from previous instructions telling citizens to shelter in place until they were advised to come to the airport.

The new advisory contradicts remarks from President Joe Biden, who ordered 6,000 Marines to Kabul to supervise the evacuations. In his televised speech on Monday, Biden said his administration would “continue to support the safe departure of civilian personnel” along with “allied civilian personnel from Afghanistan.” He said it was the Afghan government “that discouraged us from organizing a mass exodus.”

When U.S. forces took over the airport Sunday, they prioritized U.S. transports for Americans. As of Wednesday, 5,000 Americans and others have evacuated. But that work delayed a number of already-scheduled commercial flights, creating a backlog and more waiting passengers.

Security is also an issue. While the Marines supervise security inside the airport, the Taliban has patrolled the access via main roads to the facility. That leaves the United States relying on its enemy to police the overall operation. It also leaves Afghans, even with documents to depart, wary of encountering Taliban fighters to do so.

“Instead of using the U.S. military to shut off Taliban control, the Marines are using the Taliban to lock down the airport,” said Robichaux. “I can tell you the military doesn’t want to be doing this.” 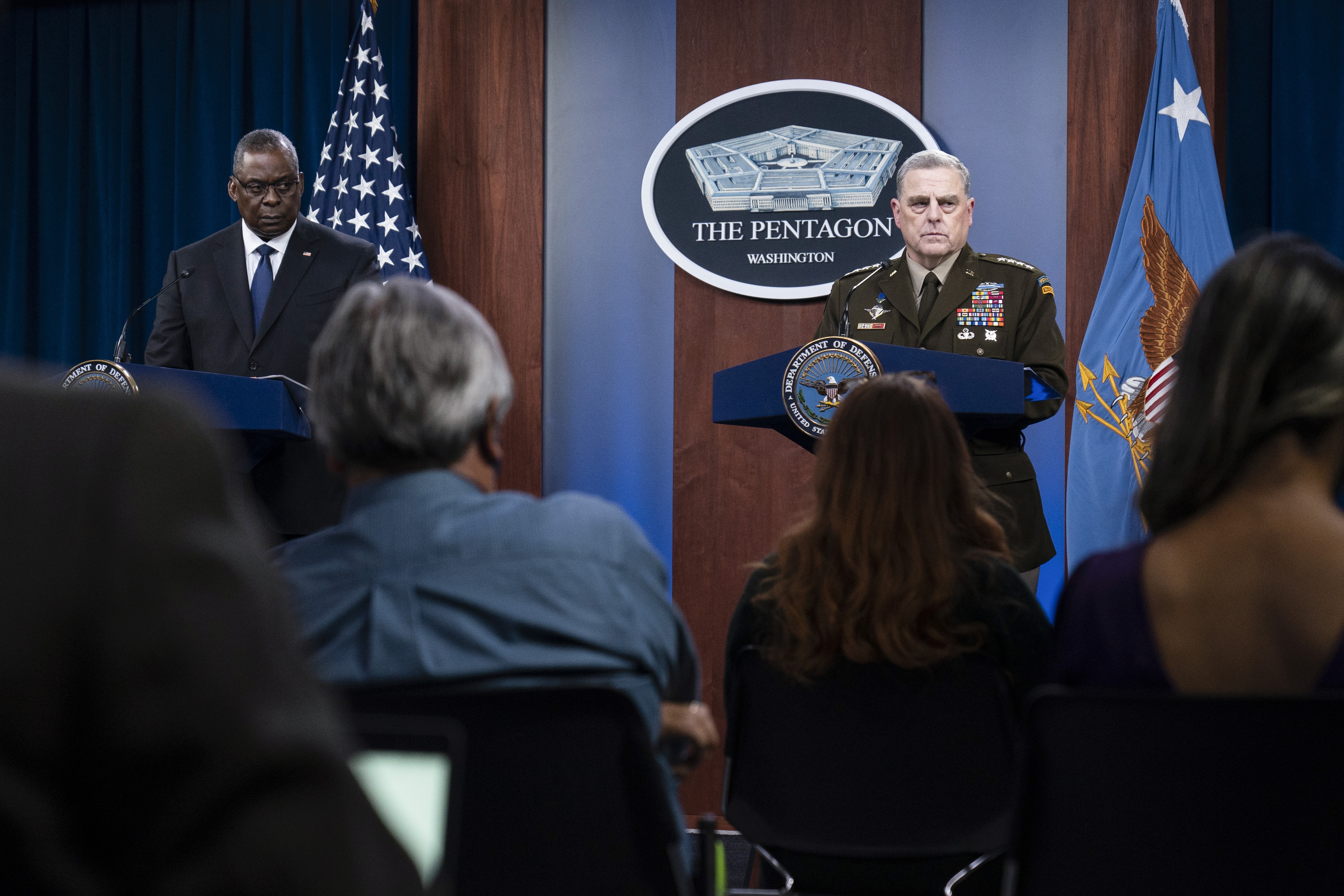 Late Wednesday top U.S. military officials issued public statements on the situation. Chairman of the Joint Chiefs of Staff Gen. Mark Milley said the United States will “maintain security, defend the airport from attack, and evacuate all Americans who desire to leave,” along with “any other evacuees the State Department designates.”

Department of Defense Secretary Lloyd Austin also appeared to put pressure on diplomats, saying “the State Department is leading the effort” and is the one to “urgently identify and process” Afghan applicants for departure.

Former President George W. Bush in a statement urged Biden to give priority to evacuating qualifying Afghans: “The Afghans now at greatest risk are the same ones who have been on the forefront of progress inside their nation. ... The United States government has the legal authority to cut the red tape for refugees during urgent humanitarian crises. And we have the responsibility and the resources to secure safe passage for them now, without bureaucratic delay.”

An estimated 850,000 Americans have served in some capacity in Afghanistan since 2001. Robichaux and others say about 80,000 Afghans who worked with them deserve U.S. protection.

Veterans have used social media to provide status updates on those Afghans. Marine Corps veteran James Kiernan told The Wall Street Journal he’s been helping his Afghan interpreter apply for a U.S. visa since 2015. On Monday he stayed in touch with the man as he sat in hiding with his family, urging him to burn key documents and trying to help him find a way out.

Taliban leaders say they are prepared to grant safe passage to those who want to leave the country. And Taliban spokesman Zabihullah Mujahid in a press conference Tuesday said the group would guarantee the rights of women “within the limits of Islam.”

Yet one of the first orders the militant group’s Cultural Commission ordered (and which WORLD viewed) advises imams and mullahs in captured areas to provide the Taliban “with a list of girls above 15 and widows under 45 to be married to Taliban fighters.”

Seeing that order, Robichaux and his team reorganized their evacuation plan to prioritize widows and female orphans of former Afghan military personnel. Others have told me they also are taking extra, and dangerous, measures to protect unmarried women.

An Afghan Christian, not named due to the threats, said his unmarried sister-in-law was among those the Taliban targeted: Militants searched her neighborhood in Kabul and asked for her by name.

Even Christians with documents allowing them to fly have been reluctant to confront the Taliban security cordon at the airport. Many of them left their homes and are in hiding. Overnight into Wednesday, about 200 Christians made their way across land borders to neighboring Pakistan and Iran. Included was the sister-in-law. Their routes required crossing Taliban-controlled territory, made necessary, the Afghan Christian told me, because the airport “is so horrible right now.”