Flu: The Story of the Great Influenza Pandemic of 1918 and the Search for the Virus That Caused It

New York Times reporter Gina Kolata approaches the 1918 flu pandemic, which killed tens of millions worldwide, through the eyes of scientists trying to discover what made it so virulent. The result is a medical detective story. Kolata zeros in on particular researchers and the lightbulb ideas that drive them. The search for clues leads to bodies buried in permafrost in Alaska and an almost forgotten medical archive in Washington, D.C. She takes the reader into the Oval Office as President Gerald Ford in 1976 orders a scientifically popular, nationwide program of swine flu inoculation—and shows how support for it rapidly craters.

The Great Influenza: The Story of the Deadliest Pandemic in History

Barry sets his history within the broader context of other trends, including the development of modern science and medicine and the consolidation of government powers during World War I. After extensive scene-setting he gets to the fall 1918 reappearance of the flu in its more virulent form. One notable thread in this broad story about experts responding to and mismanaging disaster: Ordinary citizens distrusted official pronouncements and press reports, and the result was widespread fear. Barry is a fine writer, although the book’s broad scope lessens its narrative punch.

This collection of three novellas by Porter, a Pulitzer Prize winner, shows how she uses specific detail to recreate a particular time and place. The title story comes from her own almost-fatal bout with flu. The main character—a female reporter in Denver—falls in love with a soldier headed to war. She gets sick and hovers between life and death, her dreams increasingly terror-filled. At one point she awakes and realizes she’s been screaming foul insults at her German doctor. Through that kind of detail, Porter conveys the horror of the flu and the tenor of the times.

As Bright as Heaven

In this novel, Thomas and Pauline Bright move to Philadelphia after their infant son dies. Thomas joins his uncle as an undertaker, but the 1918 flu hits the city, throwing it and the family in crisis. Meissner’s decision to use an undertaker’s family lets her depict the scale of the epidemic as bodies piled up outside. Four female characters narrate events, trying to make sense of the epidemic, the war, and women’s changing roles. At the end of the book, one of the daughters muses: “We are all doing the best we can with what life hands us. That’s all we’ve ever been able to do.” 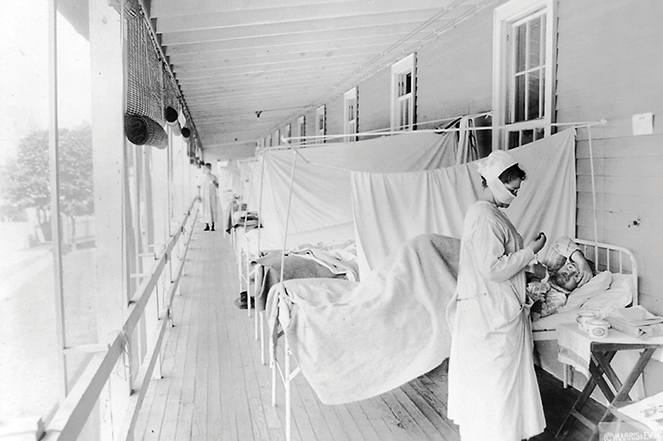 Alfred W. Crosby’s landmark America’s Forgotten Pandemic: The Influenza of 1918 (Cambridge University Press edition, 2003) first came out to little notice in 1976. Crosby had dug through public health records, newspaper accounts, letters, and journals to compile a detailed and highly readable account. He estimates the flu killed 30 million persons worldwide—though more recent estimates say 50 million. Among those were up to 600,000 Americans, many of whom were in their 20s.

Crosby traces the pandemic’s spread. Some quick numbers from one fort, Devins in Massachusetts, where the 1918 influenza began its second wave: By Day 18 of the flu’s appearance, about 6,700 soldiers, nurses, and doctors had come down with it—and up to 90 a day died. —S.O.