Amid ethnically targeted attacks around the country, Asian American Christians look for a faith-filled path forward

Whatever the layered motives behind last week’s mass shooting in Atlanta, the attack touched an already raw nerve in the Asian American community.

Before the lone shooter killed eight people, including six women of Asian descent, church leaders in New York City had already planned gatherings and days of prayer in response to rising violence and harassment toward Asian Americans.

Race-based violence against Asians is a problem nationally, especially in big cities with large Asian populations, like New York. Many of the perpetrators have targeted the elderly and women—“the helpless ones,” said Rosie Hao, a Faith Bible Seminary professor and minister at Faith Bible Church in Flushing, Queens. “They don’t go to people who are big, tall, young, or men. They know the person won’t have the ability to fight back.”

New York has seen multiple attacks on Asians in the last week alone. Someone smashed a 54-year-old Asian woman in the face with a pipe, saying, “I came here to [expletive] up Asians.” A few blocks away in a separate incident, a man repeatedly punched a 37-year-old Asian woman in the face as she and her daughter carried a sign on their way to a protest about racism against Asians.

In Brooklyn, a man pushed a 59-year-old Asian man and called him a racial slur. The same day, another man spat and coughed on an Asian woman, allegedly saying, “You dumb Asian [obscenity], I have COVID-19.” Suspects in these crimes have been black, white, and Hispanic.

Hate crimes against Asians in New York City rose to 28 last year, up from three in 2019. While statistically small figures, those numbers went up while other hate crimes went down. Sometimes prosecutors say they cannot bring hate crime charges because attackers did not say anything explicitly racist, but Asians have experienced a pattern of strangers assaulting them for seemingly no reason. In Seattle in March, for instance, a stranger knocked an Asian woman unconscious using a sock filled with rocks. In Oakland in February, a man violently pushed a 91-year-old Asian man to the ground in Chinatown. 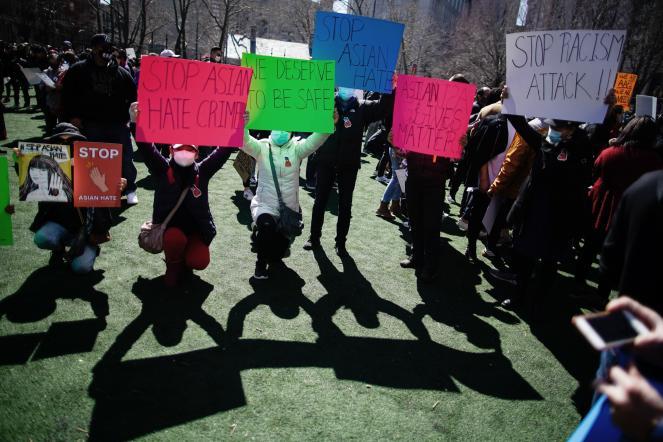 The brazenness of these attacks, along with a surge in harassment, has made some Asians feel an insecurity they hadn’t before. Some older Asians in New York now avoid the subway or going out for exercise and errands, compounding isolation from a year of pandemic social distancing.

Hao, 61, said she looks around her in the grocery store now, or when she is walking down the street.

“If people walk behind me, I will be cautious,” she said. “I will turn and make sure that people don’t do anything to me.” She recalled going to a park recently with her husband, and checking their surroundings as they got out of their car. As they walked, they saw another Asian couple, who greeted them and asked if they were OK, something Hao couldn’t recall happening before.

Hao came to the United States from Taiwan as a graduate student in 1980. She became a Christian while in school and met her husband in seminary. They have worked together in ministry in Queens for 35 years and are American citizens. She had always felt safe before now.

“This is my country. I love America just like every American,” she said through tears. “My kids were brought up in New York. … I’m no different than any other Americans. This is the country I love, why do I need to hide?”

As a Christian, Hao believes she cannot give in to fear. Her predominantly Chinese American church had planned to hold an outdoor Easter service in a park, but the leaders questioned whether that would make them targets. They’re going forward with the service anyway.

Asian American church leaders said their communities before now often avoided talking about traumatic incidents. Greg Woo, a pastor at Faith Bible Church, recalled a trip to Disney World when he was a child. While he stood in line with his dad, several children next to him made slanted eyes with their fingers, yelled a racial slur, and burst into laughter.

Woo’s dad asked him if that made him mad, and Woo said yes.

“My dad said, ‘Don’t do anything. They’re stupid, they’re ignorant,’” Woo recalled. “That’s the same way we generally react. We keep our mouths closed and don’t stir the pot.”

In the last week, though, he has heard many stories of racist experiences from his Asian Christian community.

Last year, right before the city went into lockdown, Great Commission Bible Church, a predominantly Chinese congregation, was hosting a Bible study at its storefront church in Jamaica, Queens. A group of teenagers burst in and shouted ethnic slurs, telling congregants to “go back to China,” before kicking in a door and leaving.

David Rong, the pastor, said many of his congregants have given up riding public transit since then. His wife is also nervous about grocery shopping because of how attackers have targeted women and the elderly.

In addition to Asians being blamed for the coronavirus pandemic, Rong thinks another reason for the increased hostility toward Asian Americans is the geopolitical conflict between the United States and China.

Earlier in March, before the Atlanta shooting, Rong organized with other Asian American churches a citywide prayer gathering, scheduled for April 24, against racism toward Asians. He hopes the event will help Asian pastors establish relationships with black, white, and Hispanic pastors and help their churches cooperate more, long-term.

“Even though Christians are not always the best at practicing it, we do believe in forgiveness, reconciliation, healing. That’s something we can bring to the table,” said Rong.

Hao echoed that vision, asking for prayer as Asian churches like hers meet in places where they might be targeted. She acknowledges it will “be a long road,” but says, “I know there is no other way but we keep on showing courage and love.”