Asian Americans face harassment and assaults because of the coronavirus. But one Asian church in Queens, N.Y., is serving its neighbors

Greg Woo, a pastor at Faith Bible Hope Center in Flushing, Queens, piled boxes of groceries into a van littered with packets of green bean seeds and surgical masks.

He looked over a list of addresses where he would deliver grocery boxes, then stuffed the paper in a loose grocery bag. Vision, rather than organization, is his strength, he said.

When the coronavirus pandemic started, Woo’s church heard from elderly members afraid of going out. They feared the virus, but they also were afraid after hearing stories of abuse Asians experienced on sidewalks or in grocery stores. One example: Police arrested a teenager for beating a 59-year-old Asian man in Harlem, spitting on him, telling him to go back to his country, and saying, “[Expletive] Chinese coronavirus.”

One Faith Bible volunteer, I-Lin Chien, a young immigrant who moved from Taiwan two years ago, went to drop off a box of groceries and a bag of fresh bok choy to an elderly woman who feared going out. They met on the sidewalk outside her apartment and chatted in Mandarin for a few minutes. Chien strapped the box onto a small hand cart, then returned to her car and waited to make sure the woman got inside safely, even though she kept turning around to wave Chien off.

“The only way she leaves the house is if we come,” said Woo. Three years ago, the woman’s son died of cancer. He had become a Christian and brought his parents to faith from Buddhism. They threw out their idols. Before the son died, Woo promised him, “Your mom will be like my mom.”

The food program started with those close church ties as a way to help people afraid of increasing coronavirus-related discrimination. But then it quickly expanded as the program spread by word of mouth to African Americans and Hispanics in neighborhoods nearby. One person would tell another in an apartment building about the food program, or recipients would tell the church about others they knew who were in need. Demand in Queens has been massive, consistent with the experience of food pantries across the country facing the economic fallout of the virus. Church volunteers now deliver 1,600 boxes of groceries a month. “We’re like a supermarket,” Woo laughed.

He began using Google Translate to say in Spanish, “We have groceries for you.” Volunteers also began delivering food to the growing number of homeless people they saw on the streets. As Woo dropped off a bag of groceries to an older homeless man camped out on the street, the man grinned and said to him in Mandarin, “Jesus loves you.”

Woo said this new outreach has been a gift for their church.

“The Chinese church tends to be clique-y,” said Woo, the English-speaking pastor at a church that also has services in Mandarin. “The more you are serving, the more Christ-like you are becoming. It’s not just my own kind, my own people. It’s being a neighbor. … I think this will help some of the racism, honestly.”

PRESIDENT DONALD TRUMP recently brought this association of Asians and the virus to the forefront again by referring to COVID-19 as “kung flu” at a rally in Tulsa, Okla., then repeated the phrase at Dream City Church in Phoenix, as the audience chanted it. Trump adviser Kellyanne Conway, whose husband is Asian American, had previously called that term “highly offensive” and “hurtful.”

This year the New York Police Department created a new category of motivation for a hate crime: racially motivated crimes included a statement about the coronavirus. Of 20 crimes in this new category as of July 5, 19 involved victims of Asian descent. Some were assaults, and some were harassment.

Compare that with 2019, when the city recorded three hate crimes against those of Asian descent. The NYPD does not report the ethnicity of perpetrators.

The coronavirus-based crimes against those of Asian descent made up the largest number of hate crimes this year other than anti-Semitic hate crimes (54). This was despite an overall 33 percent decline in New York hate crimes. 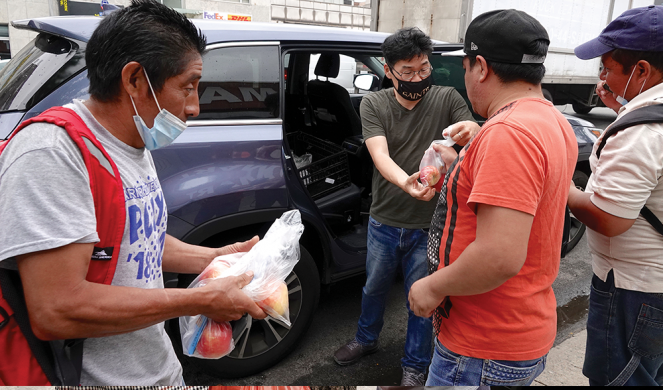 Some assaults in the city gained a lot of attention, but most people I interviewed described harassment or treatment as if they were carrying the virus because they are Asian. Some Uber drivers refused rides to Asian passengers, and children taunted Asian children, telling them to go back to their country or to stop eating bats.

“History has shown that during times of crisis, there has always been a tendency to look for scapegoats,” said Steven Markowitz about the rise in racism against Asians. Markowitz is the board chairman of the Holocaust Memorial and Tolerance Center of Nassau County, near Flushing. “The Jewish community down through history has been the subject of scrutiny and scapegoating, and we’re undoubtedly seeing the same thing right now.”

“YOU EAT THIS?” said Zhongwu Qiu, a Chinese churchgoer and volunteer in the food program, about a stick of cheese.

Faith Bible’s volunteers were going through a truck of food supplies that came from a Mennonite relief program in Pennsylvania, Christian Aid Ministries. The volunteers winnowed out things the Asian elderly wouldn’t like, such as cheese and tomato soup. Then they added fresh produce, a bag of bok choy in every box, and tofu. Woo said the elderly in his community think cheese is “gross.”

Qiu, who goes by Brenden in New York, has lived in the United States for the last seven years. He works at LaGuardia Airport and goes to a Mennonite church in Flushing, Immanuel Community. Like other volunteers, he’s experienced discrimination himself.

When the coronavirus outbreak began, the other workers at the airport told him, “Your people brought this to the United States.” His weekly hours at the airport decreased from 40 to 32, but he is chipper about it: “Now I have more time to work with the church.”

Bill Wang, who is Chinese American and goes to church with Qiu, also came to help with the food distribution.

“The racism is there. But we can be better,” said Wang. “We want to be the hands and feet of Jesus to solve the problem.”

Chien, whom I saw speak Mandarin with the elderly Chinese woman in her church, has experienced harassment: When she was playing basketball one day early in the outbreak, a group of young people yelled at her about the virus and said, “Asian! Asian!”

“It hurts, but it was kids,” she shrugged. But she feels like an outsider elsewhere. “When you go out for groceries, you can feel it. ‘Oh, virus!’ You can feel it the way they look at you.” Woo too said he saw people grab their kids or walk the other way when they saw him. 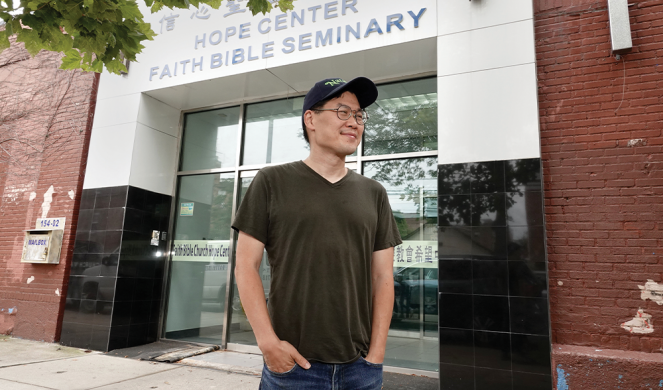 “The more you are serving, the more Christ-like you are becoming. It’s not just my own kind, my own people. It’s being a neighbor. … I think this will help some of the racism, honestly.” Danielle Richards/Genesis

Peter Ong, who oversees mercy and justice ministries at his Queens church, Living Faith Community, said Eastern cultures don’t share as much about what mistreatment they might experience: “There is an expression in Chinese, that you swallow your bitterness … you rather just hide it and swallow it.”

Queens seemed safer to many Asian Americans. Woo grew up in Louisiana, less than a mile from David Duke’s Ku Klux Klan headquarters. So as a child he grew accustomed to racist comments, such as that he was Bruce Lee’s son or he could teach kung fu. He acclimated himself to feeling like an outsider.

But now living in the largely Asian Flushing, his daughter can feel normal bringing dumplings to school for lunch, for example. That sense of normalcy shifted with the virus. Asian Americans “feel that their differences are being pointed out,” he said.

Besides the harassment, it’s been a tough year for the Woo family. His father-in-law died of COVID-19, and the overwhelmed hospital initially didn’t know which refrigerated truck his body had gone into. Woo is diabetic, and his parents worried about him being more at-risk by going out to serve people and deliver groceries.

As he drove through the streets of Flushing, he stopped at one apartment building. An African American woman came out to get her groceries as cars honked behind him to move along. He pulled over a few inches to let cars squeeze by so he and the woman could talk a little. She had been tuning in to Faith Bible’s services. He told her he enjoyed her “preaching” after she left him a message praising God.

“I don’t know where it’s taken us, but we’re really breaking down walls,” said Woo. “After all, perfect love casts out fear.”

Mark Perri, pastor of a Mennonite church in Flushing, was thinking about a historical event as he helped unload the truck of food at Faith Bible.

When New York was the Dutch colony of New Amsterdam, it had a relatively diverse population, with different languages and religions. But in 1657, New Amsterdam colonial director Peter Stuyvesant began persecuting Quakers arriving in the colony, publicly torturing one and banishing others. He introduced ordinances targeting Quakers and fined those who sheltered Quakers.

Flushing town clerk Edward Hart wrote a condemnation of Stuyvesant’s actions and called for protections of people with different beliefs or backgrounds. Thirty citizens of Flushing signed the document that became known as “the Flushing Remonstrance.” None were Quaker.

“The law of love, peace and liberty in the states extending to Jews, Turks and Egyptians, as they are considered sons of Adam, which is the glory of the outward state of Holland, so love, peace and liberty, extending to all in Christ Jesus, condemns hatred, war and bondage,” the document reads. “Therefore if any of these said persons come in love unto us, we cannot in conscience lay violent hands upon them, but give them free egress and regress unto our town … for we are bound by the law of God and man to do good unto all men and evil to no man.”

Stuyvesant threw the document’s instigators in jail. But six years later, the Dutch West India Company sided with signers and overruled Stuyvesant. Some scholars consider the Flushing Remonstrance a forerunner to the U.S. Constitution’s Bill of Rights.

As Perri looked at different churches from the neighborhood unloading boxes of groceries together to deliver to Muslim, black, and Hispanic neighbors, he said about the Flushing signers, “I see this as a fruit of their labor.” —E.B.