As Taliban threats increase and donations dry up, a private evacuation team has had to close safe houses for Afghans looking to flee

Winter is descending on Afghanistan, and the Taliban are more aggressively hunting Afghans trying to escape the country, including translators for the U.S. military like James, whose journey WORLD has continued to follow. Meanwhile, the private rescue efforts underway are struggling to maintain funding for both safe houses and charter flights for rescues.

Task Force Argo, perhaps the largest private volunteer evacuation operation with 192 handlers of Afghans, is led by U.S. veterans and military personnel trying to save their Afghan allies. They had to kick 400 Afghans awaiting evacuation flights out of its safe houses in the past week due to lack of funding, according to the organization. Argo still has 800 Afghans in safe houses funded by another group, Task Force Sunflower, but may have to turn them out also in the next few days if the group can’t get a flight out.

This is happening as the Taliban stepped up attacks on those trying to evacuate, according to military volunteers tracking the situation. Over the years of the American war in Afghanistan, the Taliban regularly targeted translators, seen as American collaborators, for torture and assassination.

Argo had raised money for three evacuation flights that got stuck because of U.S. government roadblocks and diplomatic delays over destinations. As the delays lengthened, the cost of safe houses piled up. An Argo spokesperson said safe houses for 400 people cost $10,000 per night, and these veteran volunteers were pitching in their own money. When the operation was $70,000 in the red, the team decided to close the safe houses and kick Afghan allies out.

Task Force Argo, comprised of regular civil servants and soldiers, is trying desperately to raise funds again but is not seeing the donor interest it saw in August and September and doesn’t have high-level backers. Some donors for the flights that were already covered are asking for refunds because of the delays in flying. All of the funding for the donation-based 501(c)(19) organization (an IRS designation for groups made up of veterans) goes to safe houses for Afghans on evacuation flight manifests as well as the charter evacuation flights. The group hasn’t received any funding from the State Department.

“America doesn’t care anymore,” said Argo co-founder Becky, who asked to only use her first name to protect her job as a federal employee. “They’ve moved on, so we are not able to get money, and we can’t do anything without money.” She is an Air Force reservist who served in Afghanistan and, along with her full-time job in the government, has been working nonstop on evacuations since before U.S. forces left the country in August—neglecting tooth brushing and sleep at times.

As the United States celebrated Veterans Day Thursday, Becky said she had to send out suicide prevention information to veterans working with Afghans and who were distraught about the flight delays and safe house closures.

“When you’re their handler, you are their sole point of survival and hope. It’s a super heavy burden to bear,” she said. 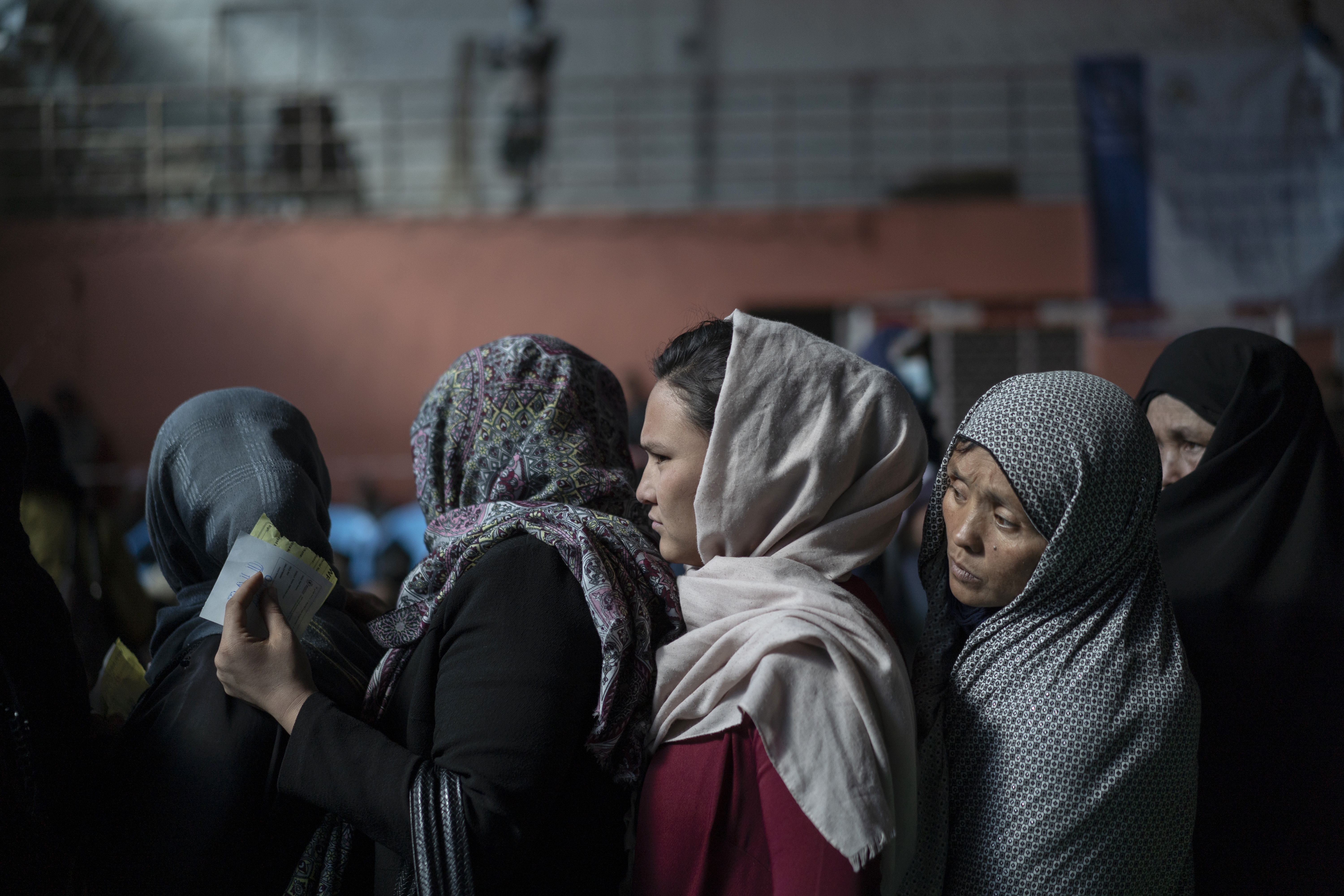 People wait to receive cash at a money distribution organized by the World Food Program in Kabul. AP Photo/Bram Janssen

For now, Argo said everyone it had to move out of safe houses is still alive. But over the weekend another one of the Afghans it was shepherding for evacuation was killed in what appeared to be a targeted bus bombing in Kabul that also killed an Afghan journalist.

The people on Argo’s flight manifests all had to be vetted through the U.S. State Department. Argo has focused on evacuating those who can immigrate to the United States, rather than general refugees, because that’s who the State Department would approve flights for.

For the three Argo flights to get out, the group needs diplomatic approval to land in a “lily pad” country. The United Arab Emirates, which has taken Afghan evacuees who are eventually bound for the United States, has no more space. The State Department has been slow to process paperwork to move people off those lily pads or to negotiate new places for them to go. Private rescuers have been desperately searching for alternative locations, from Africa to Eastern Europe, to move Afghans temporarily.

“It’s leaving a bunch of ragtag volunteers to have conversations with heads of states … it’s completely ridiculous,” Becky said. “For me to be brokering deals with other countries and writing letters to ministries of foreign affairs is so far out of my lane. But we are doing it out of sheer necessity.”

Argo volunteers said their State Department contacts are overwhelmed and understaffed and don’t have the decision-making power they need to move people through the system. WORLD reported last month that State was “inundated.”

The State Department explained the roadblocks to The Wall Street Journal by saying that some private charters extracted the wrong people with “no plan for relocation to the United States.” State has said it is limited in what it can do because it “does not have personnel on the ground.” But according to the Journal, State is now contracting with a “humanitarian partner on the ground” to evacuate American citizens and legal permanent residents only.

Volunteers feel frustrated by the changing standards of who is a priority for evacuation from the State Department: They’ve watched athletes and musicians get approval for evacuation while Special Immigrant Visa (SIV) holders (translators and others who served with U.S. forces) can’t. “It’s all about who you know and how connected you are,” said Becky. “A lot of our group is nobodies.”

The Argo volunteers say State strictly vets their manifests, and now criteria are stricter than ever: People on manifests typically need to have passports or conditional SIV approval, or be a U.S. permanent resident. That means evacuation volunteers have to make tough decisions for qualified people who need to get out but don’t have the paperwork because the U.S. Embassy is closed. The United States has said refugees have to find a way to a third country to apply for visas to the United States or complete an SIV application, but there are few ways out to a third country now.

Meanwhile SIV holders and applicants like James (the translator WORLD has reported on while concealing his name for security reasons) are scattered and trying to stay alive. Some sold their possessions to get out of the country, but with flights stuck, they have nowhere to go. Some had to flee the towns to which they evacuated because of Taliban searches. Families on the run are suffering in the cold. The World Food Programme has predicted a humanitarian crisis is looming for the winter.

Killings of American allies don’t appear to be widespread yet, but they are increasing—and information is limited because of the lack of media access. Brad Lovin, a U.S. Army veteran who has been working to try to evacuate James, has heard through his channels of about a dozen “allies” the Taliban have recently killed, women taken as Taliban wives, and one man who had boiling water poured on his head. Last week the Taliban confirmed four women, including a human rights activist, were killed after someone posed as their contact for an evacuation flight and then picked them up.

With lily pads, money, and U.S. government support hard to find, the Argo volunteers see the window for rescue narrowing with each day. The leader of another evacuation effort, the faith-based Nazarene Fund, which has probably extracted the largest number of Afghans, told WORLD last month that State seems unwilling to acknowledge how many people were abandoned.

“We’re doing the State Department’s job,” said Becky. “It’s unreal. I would love to see a partnership instead of this butting heads constantly.”

—WORLD has updated this story since its original posting.