A place for kids

FARMINGTON, N.M.—The first time Taylor Benally made a snappy remark to his house parents, they silently pumped fists. Making snippy comebacks isn’t extraordinary teenage behavior, but it was a milestone for the 13-year-old Taylor. Like most other kids at Four Corners Home for Children, a childcare program mostly for Navajos in Farmington, N.M., Taylor came from a dysfunctional family. When he first arrived at Four Corners in 2013, the boy was so reserved and insecure that any time he showed signs of self-assertion, everyone cheered.

Taylor and his 17-year-old sister Jennifer entered the foster care system after their father showed up intoxicated to court. Their mother left the family years ago. After several stints with foster families, Taylor and Jennifer finally settled at Four Corners. At first, both were silent, aloof, and awkward: When the other kids played basketball or video games, the siblings stood back and watched. Today, both are honor roll students. Taylor, who once assumed he would become a sheepherder, now plans to be an engineer and is learning to play the ukulele and guitar. Jennifer plays the flute, sings in the choir, performs in color guard, and is applying to colleges. 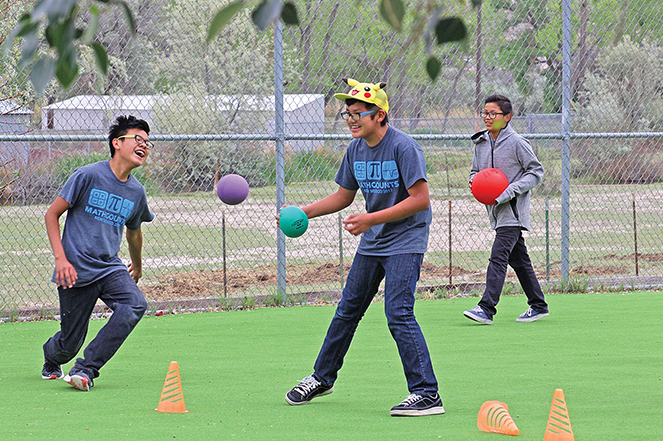 “Here is home,” said Jennifer, who giggles easily and asks deep questions about faith that make staffers pause to think. “They feel like family.” Having that loving support taught her to trust God more: “Before, I felt like everything that happened was bad, and that God didn’t have a reason for it. But now I see that He does care, and that He does have a plan.”

Taylor and Jennifer are two of many such stories at Navajo Ministries, an interdenominational nonprofit that started in 1953 with a borrowed tent when founder Jack Drake saw a desperate need to care for neglected and abused Navajo kids. The president of a local bank donated $12,000 for Drake to purchase 12 acres of land in Farmington, a town bordering the reservation. Drake borrowed books from the local library to learn how to build a house and, with the help of several volunteers from the Midwest, erected the first children’s home on the property—a two-story, five-bedroom, cinder-block house with a shingled roof that quickly filled with 17 Navajo kids.

Sixty-four years later, the mission of Navajo Ministries stays the same: To help people through programs that instill hope, restoration, and Christian values. Throughout the decades, the ministry expanded and shrank depending on available funds and need. Today Navajo Ministries includes an after-school learning program, an award-winning Christian radio station, and an outreach program that provides material and spiritual help to the Navajo Nation through vacation Bible schools and support to Navajo churches. 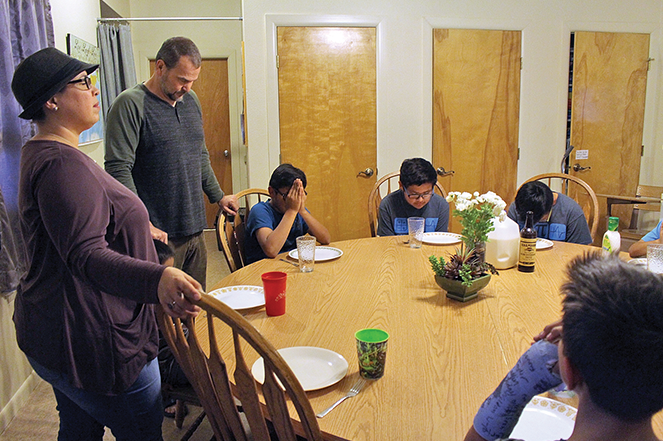 Each year, Four Corners receives about 25 to 40 new kids of all ages who come and go. Tribal or state social services call at all times asking if there’s a bed available, sometimes for an emergency case, such as an alleged sexual abuse situation or a DUI arrest while the child was in the vehicle. Some children stay for a few days, some several months, others for years until they age out at 18. Many bounce back and forth between family members and Four Corners while state social workers exhaust every preferred placement option.

In addition to long-existing issues of alcoholism and poverty, meth use continues to spike among the Navajos, as do meth-related cases of abuse and neglect. One 3-year-old girl came with a deep gash on her forehead after her father flung her against a bookcase, fracturing her skull. Officials removed another 7-year-old girl from a trailer she shared with 11 other children and several registered sex offenders. Dirt and parasites had caked her face and body for so long she now bears permanent scars. Three years later, this same girl who once cringed away from adults now looks people in the eye. She won an award for showing her three sheep at the county fair.

Navajo Ministries president Eric Fisher knows 28 beds are not enough, but said he prefers a “quality” program over “quantity.” And he sees evidences of quality through the visible changes in the kids—their first spontaneous smile, first eye contact, first voluntary hug. His favorite moment is when little children burst into his office after school to dig out cookies from the jar on his conference table. Some linger to chitchat and draw bunnies on his whiteboard. Not every child professes Christ during a stay, but many return as adults—some as teachers, social workers, ministers, healthcare workers—and say Navajo Ministries planted gospel seeds. 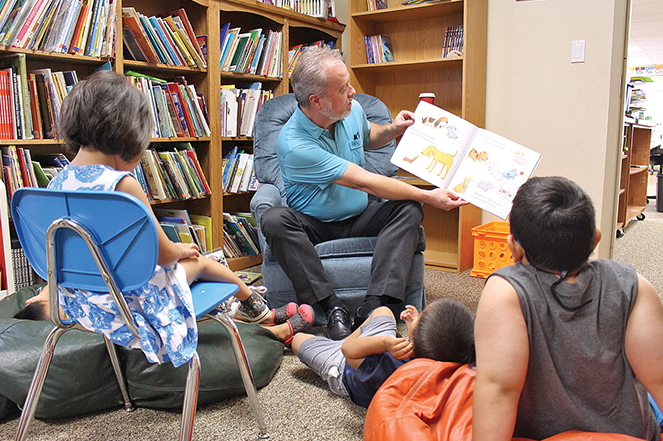 Projects assistant Rolanda Jeffrey is one of them. She was 16 when she knocked on the door of Navajo Ministries asking for a place to stay. Her mother was an alcoholic. Her father was absent. Jeffrey was a strong-willed teenager who didn’t appreciate rules. She clashed often with her house parents and tried to run away. When her house mom grabbed her hand, Jeffrey broke it trying to twist away, yet her house parents—whom Jeffrey still calls “Mom” and “Dad”— forgave her, and Jeffrey found a stable home at Four Corners until she aged out at 18. At age 23, Jeffrey again knocked on the Navajo Ministries door, this time as a single mother with a baby daughter. Then 14 years later in September 2012, she returned as a house parent with her husband Randall Jeffrey (now campus and development manager).

The Jeffreys overnight moved from caring for two children to caring for 10 in the House of Love. Knowing how difficult she had once been, Rolanda wondered if she had what it took to handle someone like her. But she felt God telling her, Look to me. It helped that, to Rolanda, returning to Navajo Ministries felt like “coming home” to “the family that God gave me.” She remembers observing the way her house parents loved God and thinking: “That’s what I want. I want that relationship with God these people have.”

AT FOUR CORNERS, lives change through the ordinary routines of family—a very big family. Every morning, House of Faith—a flat-roofed, eight-bedroom house with a traditional Navajo log hogan entrance—rumbles with the groans and rustles of eight boys ages 4 to 13. At 6:15 a.m., house mom Kristine Young marches down the narrow hallway from room to room, flicking on the lights and chirping, “Good morning!” She and her husband Cliff then dash around making sure the boys get dressed, eat breakfast, and complete their morning chores before jetting off to school. Every evening, they sit at the same giant round table for a home-cooked dinner—one night it was barbecue ribs, the next a turkey chef’s salad and the best blueberry cobbler on earth.

The Youngs take care of more than the boys’ basic needs: They parent. When they found out that some kids smoke and pick fights on the school bus, they decided to drive the boys to school themselves instead. They call the boys’ teachers, check on their grades, and ground them when they disobey. They banter and pray with them, tend to their tummy aches and heartbreaks, and take them camping by lakes, canyons, and mountains. Every evening they have family devotions before bed, and every Sunday, they dress up for church. 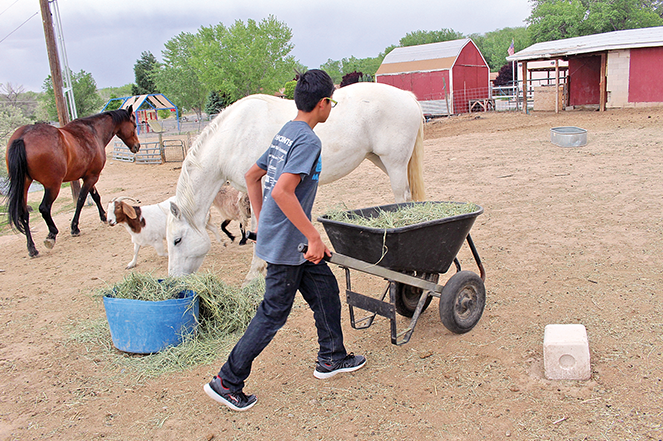 Before Four Corners, the Youngs were house parents at a Methodist children’s home in Waco, Texas, but felt it was too big, too institutionalized. So the Youngs searched for a more intimate, homelike setting, and soon found themselves road-tripping to the Navajo Ministries campus. There, they visited the warmly decorated children’s homes; watched geese, miniature horses, and llamas amble about on the little farm; and waved at children racing on their bikes. That same year, in 2013, the Youngs gave up health insurance and other enviable benefits at the Methodist home to “work a lot more hours here for less,” half-joked Cliff Young. “I didn’t have any gray in my beard when I first moved in.”

Even now, as the Youngs took a short break on their couch after the morning pandemonium, they each had one vigilant eye fixed on 4-year-old Thrice, an affectionate, chatty toddler who’s now best buddies with the Young’s 6-year-old son Max. The toddler had fallen sick yesterday, which is always alarming in a house full of boys. Even though house parents get a couple of days off per week, their work never stops. At one point, the Youngs’ full brood included four toddlers in diapers—that’s 12 diaper changes a day on very little sleep.

Most house parents around the United States last only six months on the job, but the Youngs have served four years at Four Corners and plan to stay at least six more years so they can watch their oldest boys graduate high school. “It’s not a job to us,” said Kristine Young, who was once also a foster child. “It’s a calling. … God loves them, just like we do. The kids have become our family.”

President’s salary: $56,233 with no benefits package

Next in this series on the 2017 Hope Awards: Southeast Region winner Delta Streets Academy