‘A man has to have a purpose’

In Sun Surveillance’s modest warehouse in Spartanburg, S.C., a pair of men lean over a long table filled with pliers and drills, working on small circuits and other electrical components for solar-powered, wireless surveillance cameras.

Companies and government agencies purchase the high-tech cameras mounted on aluminum poles to monitor property and safety. Ironically, nearly all the men working on the surveillance systems have done prison time: They are now graduates of Jump Start, a Christ-centered prison and re-entry ministry for men and women.

“God definitely has a sense of humor,” says Steve Wyman, a former South Carolina inmate and now a seven-year employee at Sun Surveillance. “Here’s this Christian company that’s a security business, where the majority of employees are ex-offenders.”

The idea is simple: Help inmates get started on productive lives when they’re released from prison. But the process is lengthy and intensive, and it hinges on an uncommon practice: After working with inmates inside local prisons, Jump Start continues direct ministry to the same people once they’re released.

While many worthy prison ministries offer classes and Bible studies, they often refer inmates to other Christian groups and resources once the prisoners are released. Jump Start offers help on both sides, beginning with a 40-week program for inmates in 16 different prisons in South Carolina.

Participants who do well and graduate are eligible for the ministry’s re-entry program once they’re released. The Spartanburg-based program includes transitional housing, job placement, and Christian mentoring. 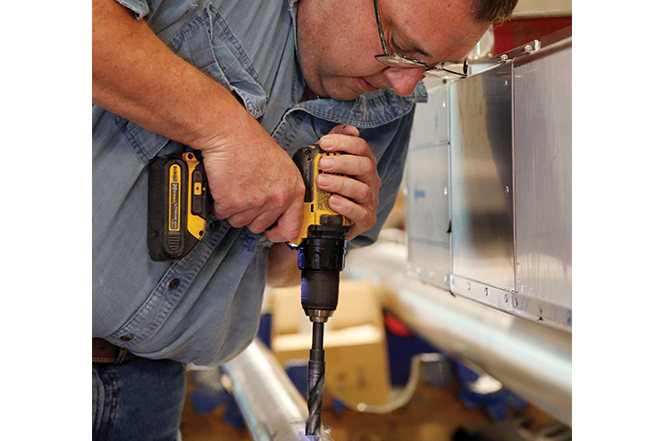 Such help is crucial. In a study of 30 states, the U.S. Department of Justice reported that within five years of release, 75 percent of inmates were rearrested. In South Carolina, 30 percent of released inmates return to prison within five years. But Jump Start reports less than 4 percent recidivism: 2,100 men and women have graduated from its 40-week program in prison over the last 10 years, and only 70 have returned to prison.

John Pate, the warden at Allendale Correctional Institution in Fairfax, S.C., where Jump Start is one of a slew of character-based programs, thinks the ministry’s success comes from offering inmates a future on both sides of the prison walls.

Growing up in poverty with a single mom, Cannady turned early to the streets, amassing 11 felonies by the age of 16. He remembers a life of “getting high, partying, drinking, and getting all the women I could.”

That lifestyle eventually landed Cannady in prison, where he noticed something unusual in a rough unit filled with gangs: a small group of men who seemed happy. “I wanted that,” he says, “even though I didn’t want other people to know I wanted it.”

Cannady learned the men were part of Jump Start. The program offered Biblical teaching that held out the possibility of knowing God and living a meaningful life. That made sense to Cannady, who began attending: “I thought, ‘Why would I want to come out worse than when I came in?’”

Sadly, many inmates do.

This April at Lee Correctional Institution in Bishopville, S.C., seven male inmates died violent deaths during an all-night, brutal prison riot. But in the same prison, another set of men meets each week to discuss how to kill their sins—by cultivating godly sorrow, pursuing Christ, and serving others.

Other lessons in the Jump Start curriculum include Biblical teaching on building healthy relationships, working hard, respecting authority, accepting responsibility, and learning how to serve other people.

Some prisoners get a chance to serve fellow inmates as small-group leaders: Jump Start staff and volunteers identify inmates with leadership potential and train them to lead discussion groups during the next 40-week study.

Cary Sanders—the inside program director and a former inmate who graduated from Jump Start—says that by the end of the 40 weeks, about 30 to 40 percent of the participants have dropped out. But for those who stay and finish well, another possibility awaits: help on the outside, if they need it.

After release, many inmates return home to family or friends. (Only about 20 percent of Jump Start participants go to the transitional housing after their release.)

Some have nowhere to go. Others don’t want to return to an environment where they might face temptation to go astray again. 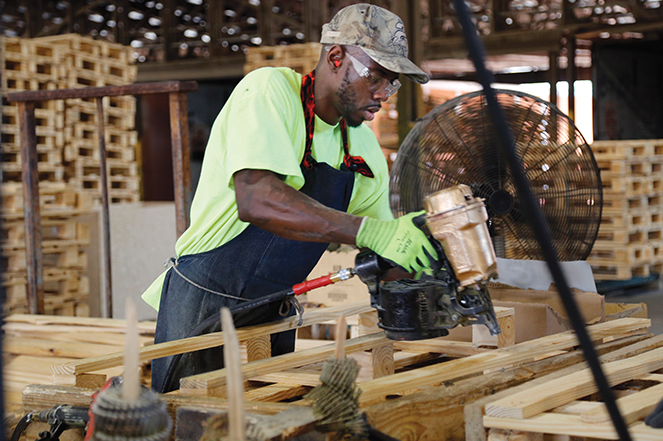 But finding housing and work isn’t always easy. Even securing identification to apply for a job—tracking down Social Security cards and birth certificates—can be a daunting process. Landing a job can be even harder. Some companies won’t hire applicants with felony records or backgrounds that include violent crimes or sex offenses.

Don Williams, a former inmate and a co-founder of Jump Start, says it took years to establish a group of employers willing to hire Jump Start participants: “Many times I’ve left an employer in tears because of some of the attitudes toward men and women with a checkered past.”

Williams caught a break with Chris Phillips of Sun Surveillance. Phillips co-founded the surveillance camera company and had been looking for a ministry opportunity to help former inmates. He agreed to give a Jump Start participant a try, and then saw how “he literally did the work of two men. He was so focused and just so thankful for the opportunity. … I saw how God works all things for good.”

It’s also been good for Phillips’ business, where most of the workers at the small company of less than a dozen employees now come from Jump Start. Among them are Wyman, the seven-year veteran who runs pre-engineer sales and shipping, and James Fowler, a design engineer who’s worked at the company for nearly eight years.

Not all the men come with skilled backgrounds, but Phillips says he can teach most people how to work on one small component that makes up a piece of a larger, more complex system. Some move on to other jobs, and Phillips is glad he can give them experience: “There’s nothing that helps you get a job like already having one.”

Not every employer gets on board as quickly. A few years ago Eric Foust, a Christian businessman and owner of Custom Forest, a hybrid pallet manufacturer in Spartanburg, thought about helping former inmates, yet was wary of hiring men whose background included violent crimes or sex offenses.

But when a need arose to build pallets off-site for a time, he agreed to hire Jump Start employees. Getting to know the men, and seeing Jump Start’s program at work, changed Foust’s perspective: “I had to overcome the thought process that there’s some reason that society tells me that I can’t hire somebody who’s done certain things in the past.”

Since those first hires nearly five years ago, Foust has hired at least 80 more Jump Start employees. He says he now has more open spots than Jump Start can fill: “God laughs at us sometimes, because here I was worried that hiring them would be a negative—and they’ve come in and improved our culture by the way they live their lives. … No matter what you’ve done, God can save anybody.”

Outside of Foust’s office, the sound of machinery and the smell of wood fill the air, as employees wearing hard hats and work goggles operate massive saws to custom build heaping piles of pallets for companies nearby.

At Roman Cannady’s station, the Jump Start grad works wonders with a nail gun, building pallets with a partner across the table. During a break, Cannady folds his work gloves across his lap and talks about starting here shortly after his release from prison four years ago: “The longest I had ever held a job was six months.”

After his release from prison, Cannady entered the transitional housing program and started working for Foust. He says he loves his work and is thankful for the program and how Christ has changed his life: “Now I’m married. I’ve got children. I’ve got responsibilities. … I’m dedicated to God first, and then to my wife and family.”

He’s also dedicated to his church, where he works with the youth group and tries to encourage young men to avoid the trouble he experienced: “It’s hard because I really, really want them to get it and sometimes they don’t. But sometimes they do and it’s humbling. It’s very humbling.” 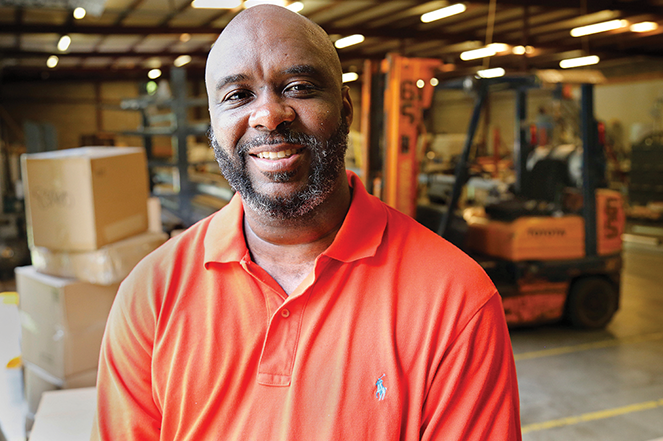 IN THE FIRST MONTHS AFTER RELEASE, Jump Start participants live in a 16-bed transitional home in downtown Spartanburg. (Six women live in a separate location.) After 30 to 90 days, the men move to a handful of smaller transitional homes around town.

Williams helps them find jobs, and another staffer provides transportation. Local churches welcome them to worship and donate items like furniture, clothing, and cleaning supplies. One local church offers dental services. Others send members to train as mentors.

Each month, participants meet with program directors to review their progress. Jump Start staff members meet with representatives from local agencies—parole and probation, mental health, vocational rehab—to review cases they have in common.

On a warm afternoon in a temporary office space above the gym in a local church, Don Williams and re-entry coordinator Chris Pritchard sit across from James Reynolds. He’s had a tougher time with re-entry and struggles with health problems and keeping a job.

Pritchard encourages him to keep asking for shifts at a local Dollar General and presses him about spending money on cigarettes when his income is low. He also asks about Reynolds’ spiritual life. He goes to church but admits he hasn’t been reading his Bible lately. Pritchard recommends an easier-to-understand translation and asks Reynolds to let him know what he thinks when he’s read it. They’ll meet again soon.

Darrin Smalls has had more progress. He gives Pritchard his monthly budget sheet, showing how much money he has in checking and savings accounts, any debts, and a basic breakdown of how he’s spent his money.

Smalls, who left prison last year, runs a stacking machine and cleans press rollers at a large printing company. He says he’s two steps away from the top-pay level for his position. Smalls admits his work sometimes gets in the way of spiritual disciplines. After working a 12-hour shift, he’s often ready for bed. “Can I make a suggestion?” asks Pritchard. “Could you get up 30 minutes earlier?”

“I get up at 4:30 in the morning,” Smalls says. “That’s what time I get up!” Pritchard says. “Just do me a favor. When you get up in the morning just text me a short passage you’re going to read, and I’ll read the same one too. We’ll do it together.”

Like other Jump Start grads, Smalls says he’s thankful for his job and for an opportunity for a new start: “Going to prison saved my life. There’s been occasions when I should have been dead, but God saved me. And I won’t take it for granted.”

Executive director’s salary: $133,000, paid by Greenleaf Foundation, an outside charitable foundation, and by a local for-profit company

Next in this series on the 2018 Hope Awards: Northwest Region winner Windswept Academy