The early morning prairie sun reflects off the yellow school bus that brings children to a tan, aluminum-sided school building at the end of a residential street.

The bus’s doors part, and boisterous children pour out wearing dresses, T-shirts, and polos in the school uniform colors of blue, green, or red. Backpacks bounce as the kerfuffle pushes through the front door, heads down the hallway, and turns a corner into the white-tiled gymnasium that doubles as a cafeteria.

Kitchen volunteers dish steaming biscuits washed in white gravy and sausage onto Styrofoam plates. Teachers sit at the head of each lunch table admonishing children when they try to excuse themselves or forget what those napkins are for. Two second-grade girls discuss what they’ll name their daughters someday: Sarah or Sierra.

That’s breakfast time at Windswept Academy on the Cheyenne River Indian Reservation, where local people are suspicious of outsiders and Christian schools, for good reason. Government policy from the 1880s through the 1930s used private schools to force the Lakota (also known as the Teton Sioux) to assimilate. But Windswept’s mission is to provide Christ-centered affordable education—and to succeed it has to overcome that history and build trust with the local community. 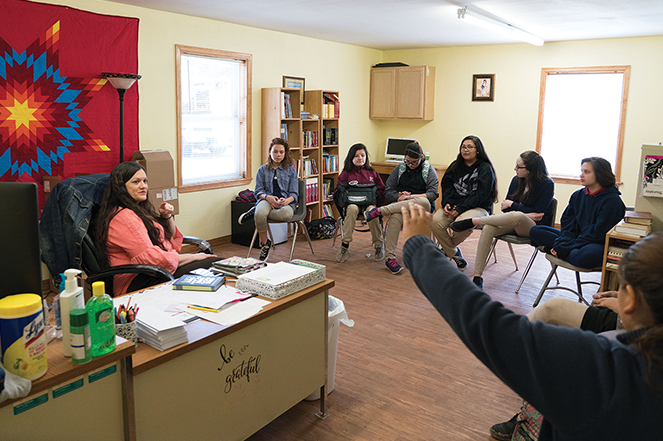 Ann and Ilhami Konur founded Windswept in 2009. The school opened with only 12 students in a house where bedrooms doubled as classrooms. The Konurs had lived in Virginia, but they were familiar with the reservation because their church made regular mission trips there.

The couple fell in love with the small town of Eagle Butte and the fourth-largest reservation in the United States: Home to 8,500 people, the reservation sweeps west from the Missouri River for 60 miles over treeless plains. Cattle, creek bottoms, ranch houses, and a privately owned buffalo herd dot the landscape.

The Konurs saw how poverty and substance abuse challenged the reservation. They realized that annual, one-week Bible schools weren’t making a long-term difference in the lives of children and their families, and Ann Konur began dreaming at night of a school that would be involved in the day-to-day lives of families.

In 2006, the Konurs left Virginia and moved to South Dakota. Three years later they opened the school. In the beginning years, Ann and one other teacher taught while Ilhami traveled and raised funds. “We were fearless because we were so green,” he said.

Raising money was easier than winning trust. The Lakota still remember how some Christian schools forced children to cut their hair and punished them if they spoke their Native language. When Windswept first opened, rumors circulated that the school doled out corporal punishment. An angry member of the community saw Ilhami one day and told him he could have “run you over so easily.”

Over the past decade, Windswept Academy has earned acceptance in the community by honoring Lakota culture and caring for the community’s children. Tribal elders have given the Konurs and others at the school three star quilts—a symbol of honor and respect. And four years after that man threatened Ilhami Konur, he approached both Konurs at the grocery store and shook their hands.

They’ve also earned the support of churches in the community and around the country. Sixty churches have raised money and sent teams to build the school. First came a small gymnasium, then an elementary wing, and, this past year, a high-school wing. In nine years, the school has grown from 12 to 92 students.

Sometimes the school still missteps and cultural miscommunications occur. This year, Windswept created a fundraising video that offended some members of the tribe by focusing too much on the problems on the reservation. The school took the video off the internet and didn’t try to defend it. When conflict occurs, Windswept chooses to apologize and move on. “They’ve had a lot of bad experiences with Christians,” headmaster Clint Holley said. “I can’t change the way my ancestors treated them in the past … but what I can do is do right from this point forward. And that’s what we’re trying to do.” 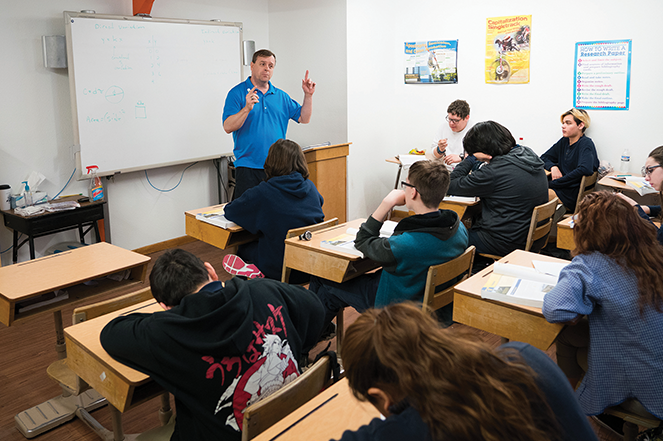 AFTER THE BISCUIT-AND-GRAVY BREAKFAST, Holley flashes the lunchroom lights off and back on. The room goes quiet and students jump to attention, hands over hearts. Holley leads them in the Pledge of Allegiance and prayer. Then teachers line their students up and march off to their classes.

Students sit at wooden desks in small classrooms. The school caps class sizes at 12 students so teachers can give students individualized attention and develop closer relationships with them and their parents. That attention to students has translated into a 94 percent attendance rate, and students are scoring at the national average on standardized tests.

Holley says the school doesn’t want to create a “class society” by only serving families that can afford private education. Thanks to donations, tuition is $50 dollars a month, which helps cover breakfast and lunch costs. If a family has more than two children, it pays no more than $100. Almost all of the students are Native American.

The school incorporates cultural education into the school day. Lakota elders come and teach children about Lakota culture. One elder told students how she was born in a teepee. Students learn basic Lakota greetings and words like mazaskanskan for clock and wowapi for books. Teachers attend nonreligious community powwows. When a history textbook portrayed Native Americans in a disparaging way, Amy Holley, Clint Holley’s wife and a teacher at the school, called the publisher, which edited out the offending material.

Teachers work to give students world-expanding experiences. This year, teachers took students on field trips to see the Mount Rushmore and Crazy Horse monuments, Christmas trees in the state Capitol, and an air and space museum. On Friday nights, Windswept teachers along with some public school teachers hold a game night at a local church where students play egg toss and have baking contests.

Teachers rotate driving bus routes before and after school. During the school day, one intern serves as the only teacher’s assistant for the whole school. After school, teachers help mop hall floors and take out trash and sometimes stay as late as 7:30 p.m. correcting papers and planning lessons.

Windswept has also earned the trust of the community by caring for children in difficult circumstances. The Lakota language doesn’t have a word for orphan. The tribe believes if a child has no parents, then another family member will step in.

One year Clint Holley began questioning why a little girl kept leaving school for multiple grandmother funerals: He wondered, How many grandmothers can one person have? When he asked the girl’s parents about the funerals, he learned the “grandmothers” were actually great-aunts. The Lakota culture treats any blood relative or community member as an immediate family member. “You are family because you are Lakota,” Holley explains. 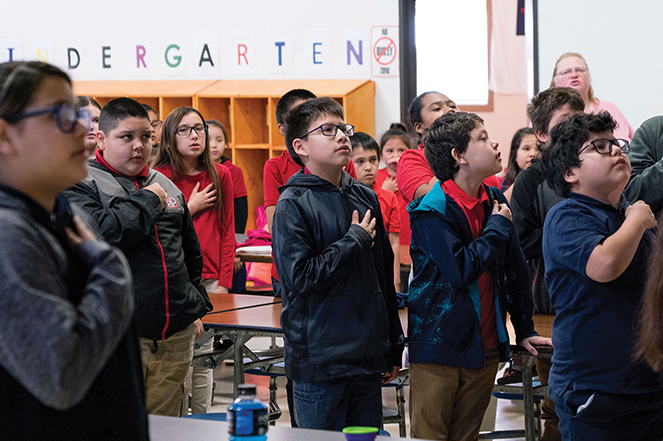 Most of the school’s teachers come from the East Coast, but they have adopted this idea of family. During the last decade, every Windswept teacher has temporarily cared for—or taken custody of—a student when parents or grandparents asked for help.

The Holleys have cared for seven children and today have custody of four. Their goal is always to reunify children with parents. One little boy lived with them for three years. The Holleys helped the boy’s mother get into rehab. Each weekend they made the six-hour round trip so he could visit her. Today, she’s clean of drugs, has a job, and has her son back.

The Holleys are now helping one father regain custody of two sisters in their care. He needs to show the tribal court he’s fit to parent, so they are helping him take parenting classes and find a job.

Burnout is a problem. Many teachers only stay for two years because they are far from their homes on the East Coast. Replacing those teachers is a challenge. Ann and Ilhami Konur say they hope more local teachers eventually will want to be a part of the school’s mission, but, in the meantime, Ilhami says, “I know God provides everything we need.”

AT LUNCHTIME, the school’s few high schoolers set the table with napkins, silverware, and cups. Once students hit seventh grade, many leave for the public school because they want to play sports, and Windswept doesn’t yet offer any. The high schoolers who do stay say it’s because they love their teachers, friends, and learning about the Bible: Amy Holley and another teacher hold 30 minutes of Bible study each day.

Zianne is a sophomore. Ann Konur began picking her up for Sunday school when she was 7, and eventually she started attending Windswept. She says Ann Konur and Amy Holley helped her leave an abusive home and enter a Christian foster home. Teachers helped her “keep my relationship with God” through that time. 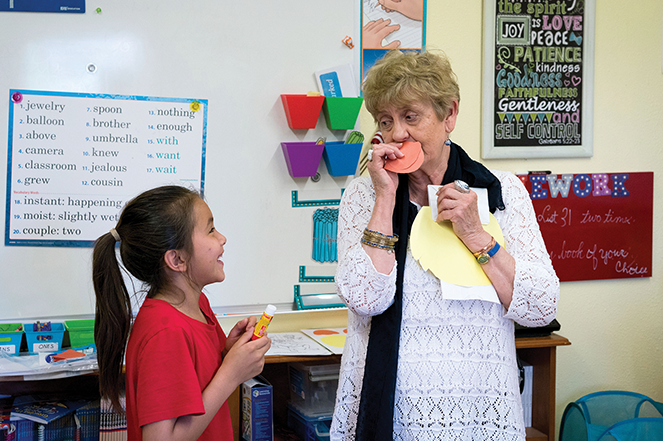 Second-grade teacher Claudia Hatfield gets a laugh from a student while making paper ducks. Alex Garcia/Genesis

Jasper Pesicka transferred to the school three years ago. He became a Christian believer a year later and says he stays because of his teachers: “They take each individual kid, and they spend time with them. They say they love you all the time. You don’t really get that anywhere else.”

Another student said teacher support and school-provided counseling helped her overcome depression. A grandparent told the Holleys there’s “a lot less cussing in the house” since his grandchild started attending.

Teaching a love of Scripture extends down the grades. Parents Kelly and Clay Lawrence said the school has given their seventh-grade son Henry a love for the Bible. During his wrestling practice at the public school, Henry started sharing the gospel with a teammate during the 10-minute warm-up run. Clay said the teachers “care about not just how they’re doing at school, but how they’re doing away from school.”

Next year Windswept will have its first graduating class. Headmaster Clint Holley says he hopes the education students receive here will allow them to pursue dreams and that their faith will give them the tools to lead their community. “I would love to see people be able to raise a family, stay here and raise a family here, be successful, make a difference, and transform our nation into a godly nation. The Lakota nation.”

Next in this series on the 2018 Hope Awards: International winner Aquila Rehab Center